Fast and the Furious star Elsa Pataky lives in a near-$30million compound in stunning coast town of Byron Bay.

But the actress proved she’s still willing to live the simple life when she went for one of her signature barefoot strolls on Friday.

The 45-year-old kept it natural as she walked with one of her sons – Tristan or Sasha, seven – in the town, with her later showing her dirty feet from the road.

Barefoot beauty! Hollywood star Elsa Pataky, 45, (pictured) showed off her gypsy feet as she went barefoot for a stroll with one of her sons in stunning in Byron Bay on Friday

The Tidelands actress looked every inch the doting mother as she lovingly put her arm around her young son.

Despite going barefoot, Elsa looked glam in a loose-fitting T-shirt with a pair of Nagnata shorts, worth a cool $260.

The shorts were created by the ex-girlfriend of actor Simon Baker, Laura May Gibbs, who recently hit the news for being against vaccine mandates. It is not suggested that Elsa shares the same views. 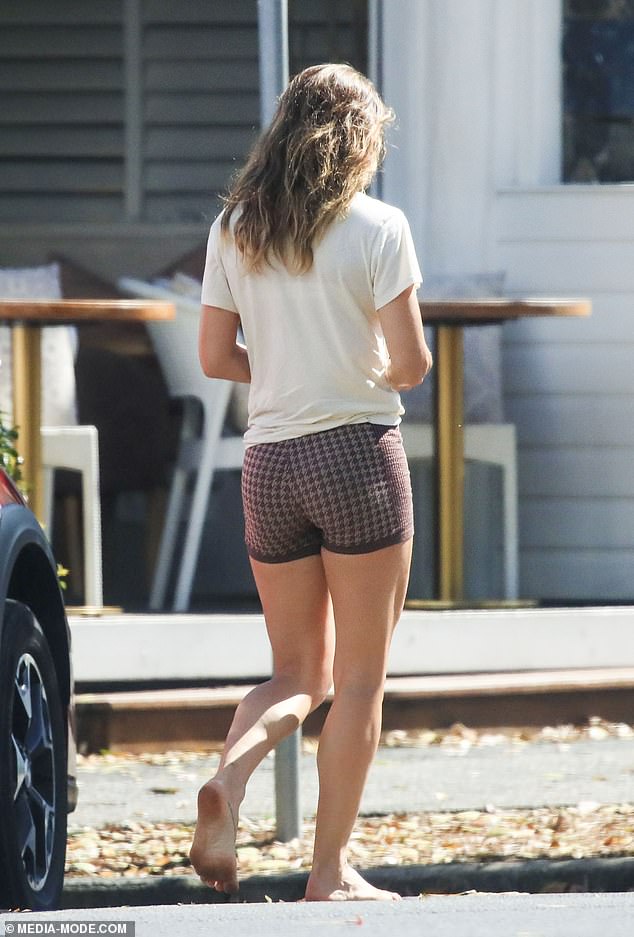 Oh! Elsa’s feet looked a little worse for wear as she strolled barefoot down the street 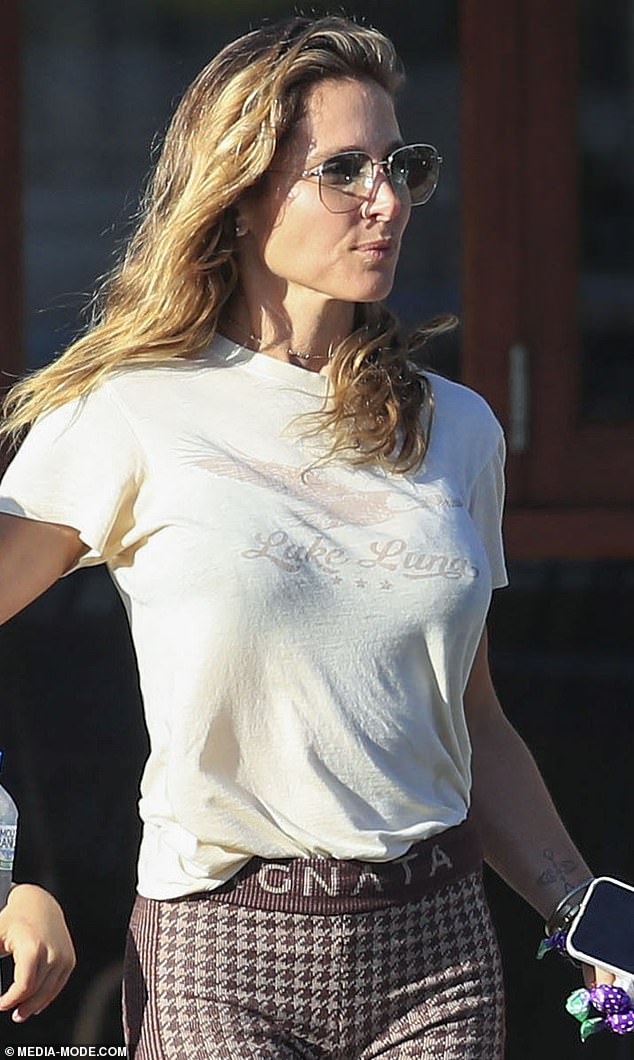 Glam: Despite going barefoot Elsa looked glam in a tight-fitting t-shirt which she paired with a glam pair of Nagnata shorts, worth a cool $260

Elsa finished her look with a pair of semi-transparent sunglasses. She wore minimal makeup and wore her blonde tresses out and wavy.

The actress has been busy taking care of the kids while Chris has been in Los Angeles to continue working on film Thor: Love and Thunder.

Weeks ago, Chris and his brothers Liam and Luke made a rare public appearance together as they stepped out for dinner with their father Craig and Liam’s girlfriend Gabriella Brooks. 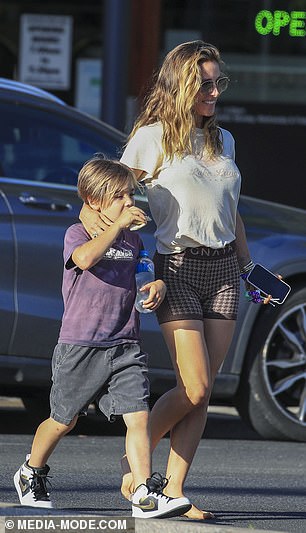 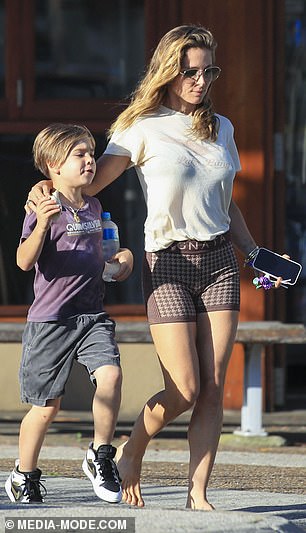 Doting: Elsa lovingly put her arm around one of her sons as the pair strolled down the street

Chris and his family were all smiles as they left the Via Veneto restaurant in Santa Monica.

Chris and Elsa met in early 2010 and married in December that year.

The family of five spend most of their time living in Byron Bay, on the NSW North Coast, in a mega-mansion estimated to be worth $30million.

The relocated from Los Angeles in 2014. 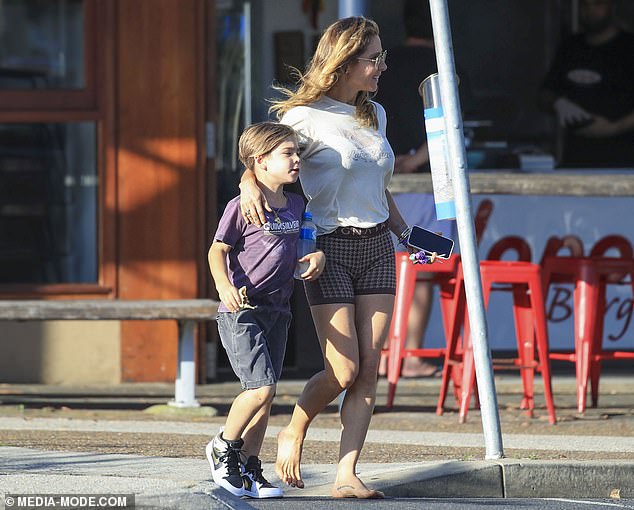 Loving: Chris and Elsa met in early 2010 and married in December that year. The relocated from Los Angeles in 2014

Laura made headlines in October after her activewear brand Nagnata announced on Instagram it would not re-open its Byron Bay store until unvaccinated customers were legally allowed to shop there.

Posting to its official page at the time, Nagnata uploaded a photo of three models of different ethnicities, alongside a declaration that the brand would ‘reopen when ALL are welcome without fear of judgement’.

The lengthy caption spoke about the importance of ‘inclusivity’ and opposing ‘discrimination’ when it comes to the Covid-19 vaccine.

The designer also attended a rally at the NSW-Queensland border protesting vaccine mandates earlier this month.

The demonstration was part of a series of rallies across the country against mandatory Covid jabs for certain industries and occupations.

Vaccinations are vital to reducing the spread of preventable diseases, and any suggestion otherwise flies in the face of science and the advice of medical experts around the globe. 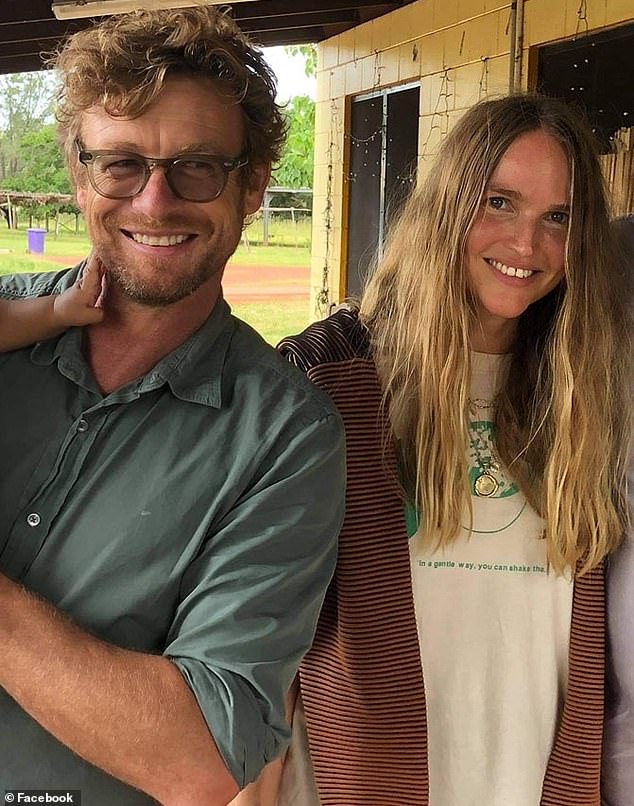 Over: On Tuesday, a spokesperson for The Mentalist actor Simon Baker (left) told Daily Mail Australia that he and Laura May Gibbs (right), 36, quietly parted ways several months ago