Elton John review: Every ten minutes he pulls out another classic

Everywhere you look in pop music, someone is saying goodbye. For Soft Cell, this took the form of a single London show. For Sir Elton John, it means a world tour, spanning 300 nights.

The Farewell Yellow Brick Road tour includes a lap of honour round Britain next summer, then another before Christmas – Christmas 2020, that is. At 71, Elton is so desperate to spend more time with his family that he’s going to leave the stage in three years flat.

He has quit touring before, back in 1977, only to return two years later. He clearly adores his young sons, but he loves performing too. He’s like a friend who solemnly assures you she won’t touch a cigarette after her 40th birthday, when she’s 37. 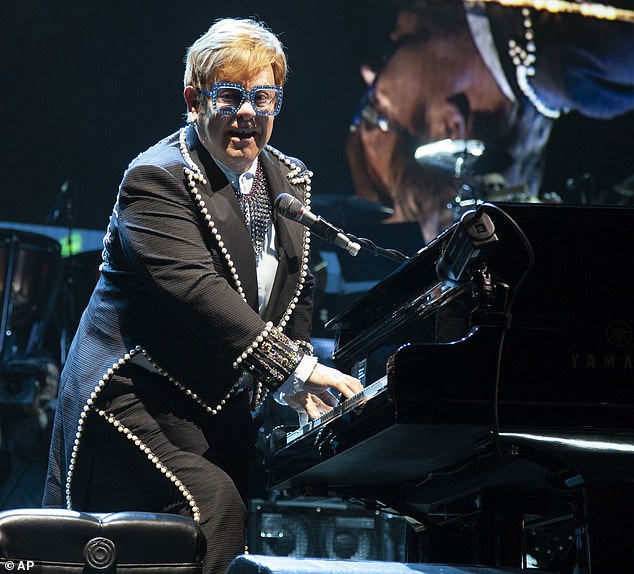 For a tubby septuagenarian sitting on a stool, Elton certainly knows how to catch the eye. After arriving as a posh Pearly King in a tailcoat, he squeezes into a suit made of pale pink silk

In showbiz, retiring is not so much a statement of intent as an excuse for a party. This tour features Elton’s familiar band and something like his usual set list, but he goes to town with the visuals and the reminiscences, turning the Yellow Brick Road into Memory Lane.

For a tubby septuagenarian sitting on a stool, he certainly knows how to catch the eye. After arriving as a posh Pearly King in a gem-encrusted tailcoat, he squeezes into a suit made of pale pink silk, like the bomber jacket on the cover of Goodbye Yellow Brick Road. Of the 24 tracks he plays, six come from that album, which may be his best.

The set, designed by Stufish in London and built by Tait in Pennsylvania, deploys a giant picture frame with highlights from Elton’s CV carved into it, from John Lennon, who shared this stage with him in 1974, to Billy Elliot.

Its lyrics don’t mention her, but Philadelphia Freedom was written for Elton’s friend Billie Jean King. The title is the name of her squad.

The effect is cheesy but charming. The piano, a Yamaha grand, sits there as ever, stage right – until, with Elton still playing, it slides over to stage left. The driverless car has been overtaken by the driverless piano.

On the screen, conventional close-ups alternate with bright ideas. For Crocodile Rock, Elton’s old costumes reappear, worn by giggling fans. For Candle In The Wind, there’s footage of Marilyn Monroe, pouting, flirting, then suddenly beset with sadness. Princess Diana isn’t mentioned, but she is on many people’s minds.

Elton keeps pausing to reflect, lucidly, as befits a man now working on his memoirs. He relives the moment in 1990 when he reached rock bottom – ‘I was a drug addict’ – and launched his Aids Foundation, which has now raised $400 million. He thanks the fans, with feeling: ‘The greatest thing a musician can have is a rapport with another human being.’

That bond was forged, above all, by his great Seventies ballads. Every ten minutes he pulls out another classic: Rocket Man, Daniel, Don’t Let The Sun Go Down On Me – the true theme tune of this tour – and finally, after rather too many wedding rockers, a majestic Your Song and a soaring Goodbye Yellow Brick Road.

With the stalls engulfed in yellow confetti, Elton makes a little joke at his own expense. He leaves on a stairlift. By the time this tour ends, he may well need it.

Well, it wouldn’t be Culture Club without a bit of bickering. We’re 20 seconds into David Bowie’s Let’s Dance and the second guitarist reckons Boy George just shouted out the name of the wrong city.

‘What did I say?’ queries George. ‘You said Birmingham,’ the guitarist suggests. ‘I said Nottingham, you d***,’ the singer replies sharply. Then a smile and a second, clearer attempt: ‘Nottingham!’

That’s Boy George at 57 – still the odd prickly moment, but charming with it. And he’s keen, you sense, to do this right: the band’s biggest tour in decades, on the back of a decent new album, Life. 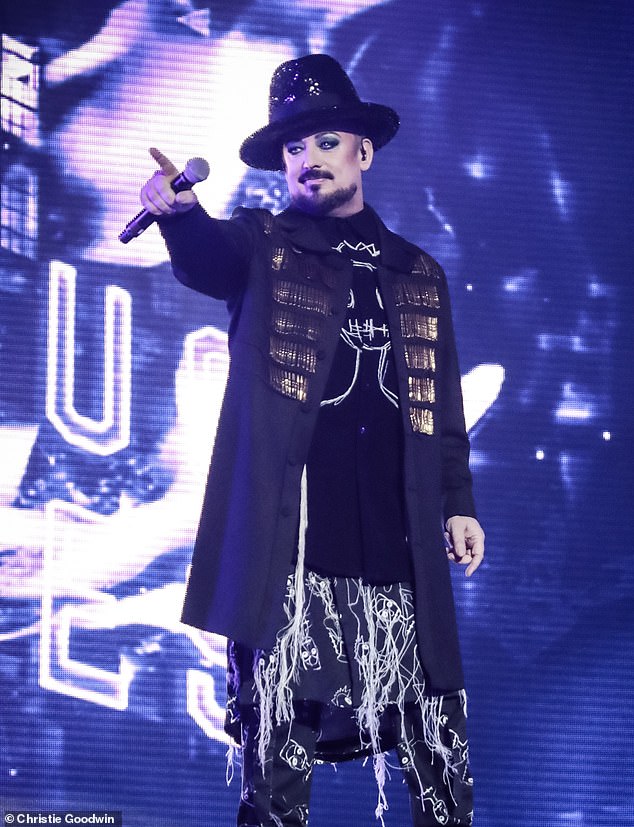 That’s Boy George at 57 – still the odd prickly moment, but charming with it. And he’s keen, you sense, to do this right: the band’s biggest tour in decades, on the back of new album, Life

In Culture Club’s heyday, they were hotter than you might entirely recall. But the band dissolved in 1986 and haven’t strayed back into fashion since.

Who knows, now might be the time. Opener God & Love proves they’re not just a museum piece, though there are plenty of hits, too.

Karma Chameleon ends the night like a hymn, the music dying away leaving only organ, voices and a sense of a pop phenomenon determined not to be forgotten. 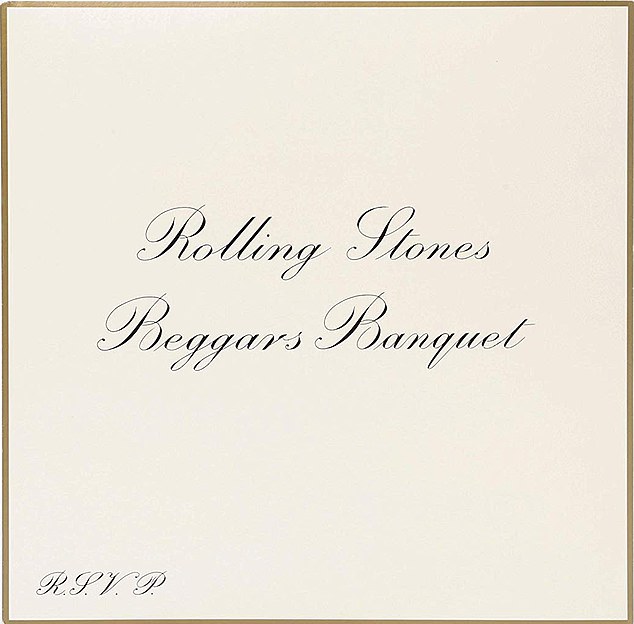 Beggars Banquet found the Stones at their most diabolical (Sympathy For The Devil) and sleazy (Stray Cat Blues), but also at their sweetest (Factory Girl, No Expectations) and most idealistic (Street Fighting Man). Perhaps their most concisely fine album, now newly remastered and lovingly repackaged 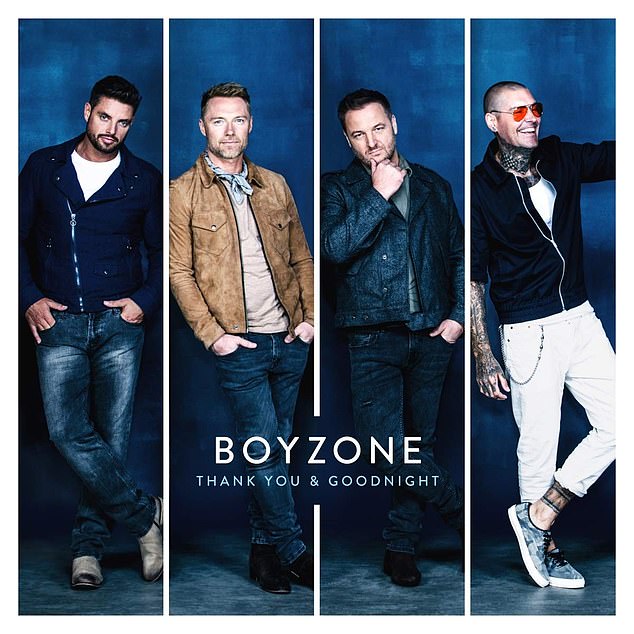 A name like Boyzone always had a best-before date, and the surviving foursome are now hanging it up with a final album. They never had much ambition to be anything fancier than the Irish Take That, and that’s what they remain, with a similar latterday fondness for manful, sky-scraping anthems