Sir Elton John appeared on the red carpet at the 72nd annual Cannes Film Festival on Thursday, where he posed for snaps with Taron Egerton, who is playing him in the biopic of his life.

Elton, 72, and Taron, 29, larked around while dressed in flamboyant suits and glasses at the Rocketman premiere, alongside The Bodyguard star, Richard Madden, 32.

The movie is a musical about the fantastical human story of Elton John’s breakthrough years and is produced by both Elton and his husband David Furnish, 56. 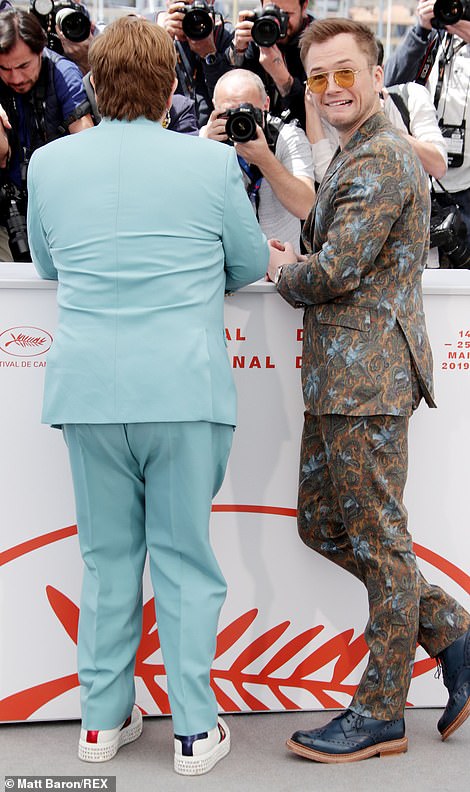 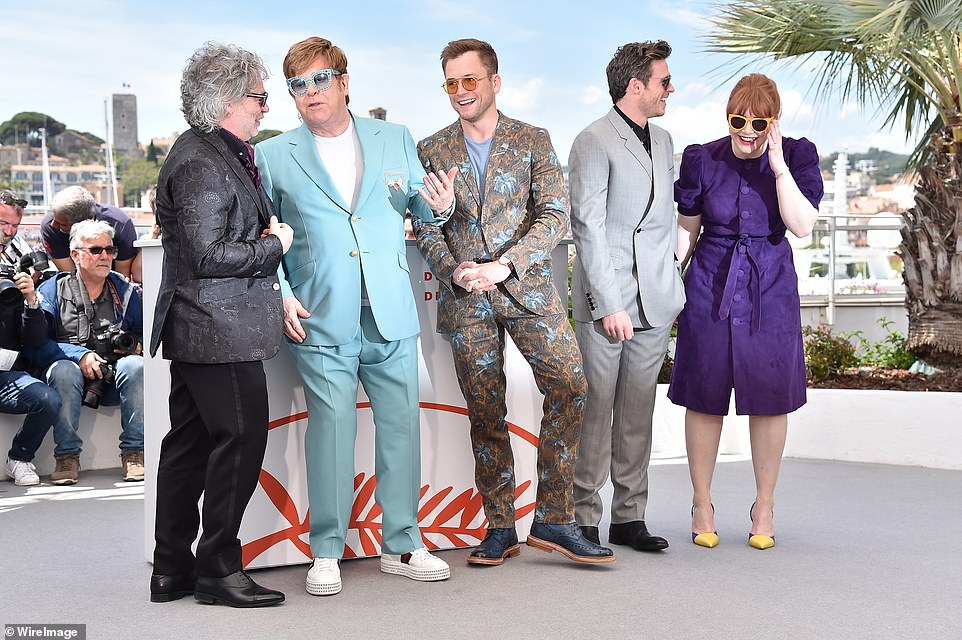 Elton wore a sea blue Gucci suit which had the word ‘Rocketman’ embroidered on the pocket. He teamed it with Gucci trainers and of course, a pair of glasses in the exact same hue.

He threw his arms around Taron, who wore an equally stunning suit, which had flecks of the same shade of blue within the pattern.

Richard plays Elton’s manager John Reid in the movie. They first met at a Motown Christmas party, moved in with one another and became lovers. 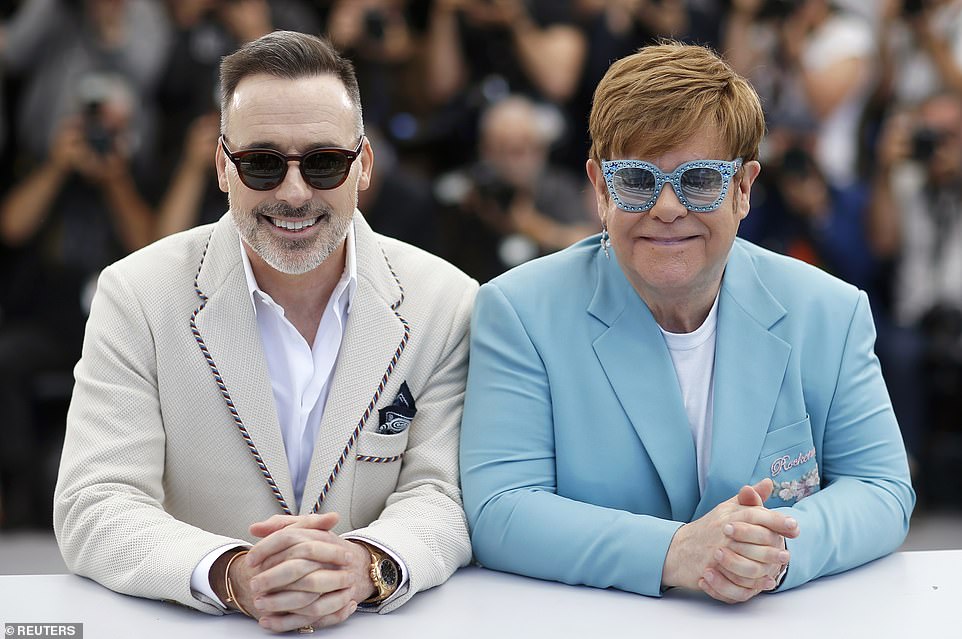 His love: Elton and his husband David Furnish (left) have co-produced the movie together 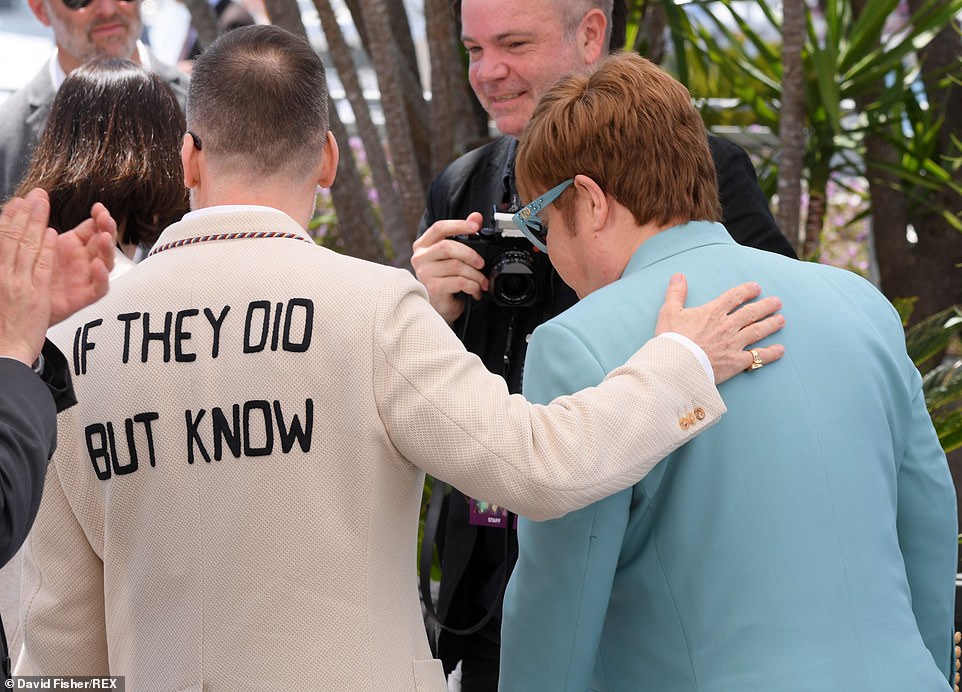 Loving life: David’s Gucci suit had the playful words: ‘If they did but know’ emblazoned across the back 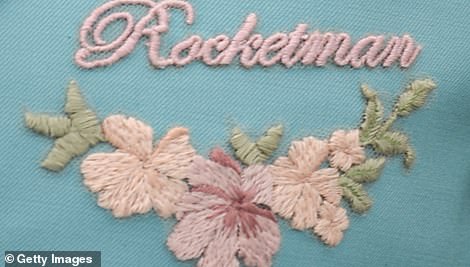 All in the details: Elton had Rocketman embroidered on his Gucci jacket lapel

Their romance ended after five years, but John remained Elton’s manager until 1998.

Richard kept things simple in a grey suit  as he posed with Bryce Dallas Howard, who wore a purple midi dress and yellow sunglasses.

‘First and foremost, the fact that Elton is involved and his husband, David Furnish, is everything.

‘I loved getting to learn about him, and to immerse myself in his world and his music. It’s a classic musical. It’s so, so fun and transportative and wild. I’m just thrilled to be a part of it. It’s really exciting.’ 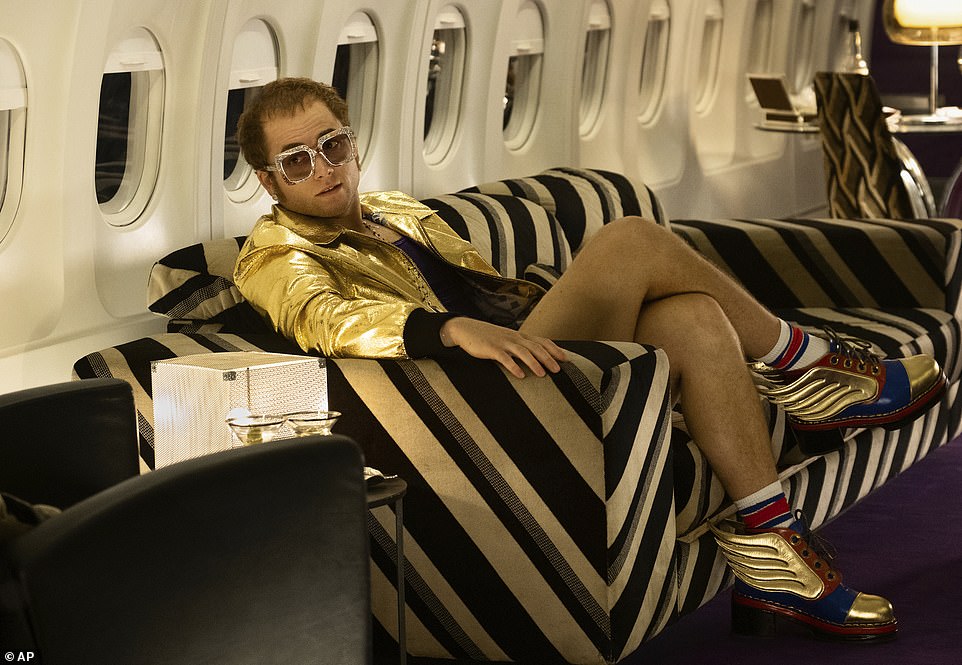 Shining star: The movie is a musical about the fantastical human story of Elton John’s breakthrough years (Taron as Elton from a film still) 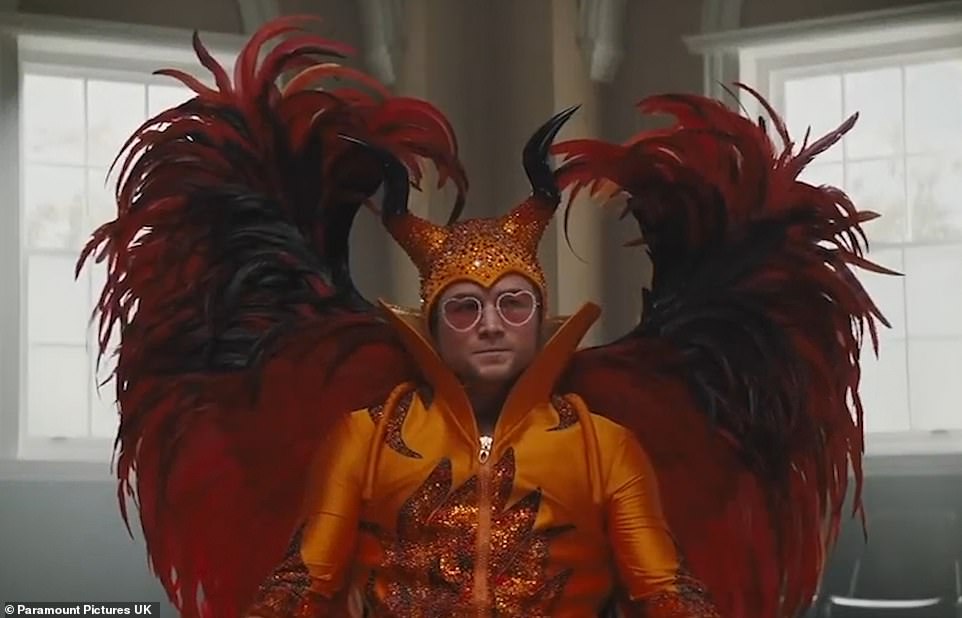 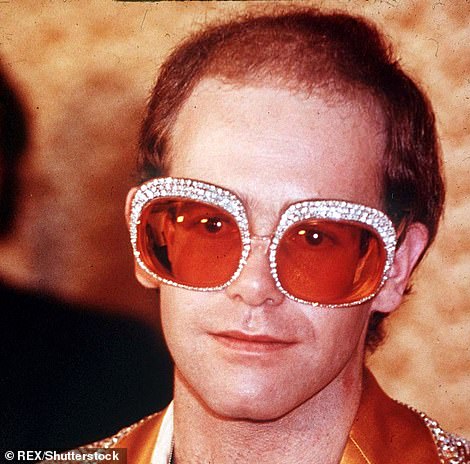 Spot the difference: The actor looks remarkably similar to the music icon (right in 1976) in the upcoming movie

It’s been rumoured that Elton could perform at the movie’s premiere afterparty, where he performed shot the video to I’m Still Standing back in 1983.

According to Deadline, a stage is being built on the beach, leading to speculation that Taron and Elton could perform a duet together. Paramount provided no comment to the site.

Elton has previously spoken about how thrilled he is that Taron has decided to take on the role as him.

He said: ‘For those of you who don’t know, in Rocketman I don’t sing anything. Taron has recorded, re-recorded, all the songs that are in the movie, and sings them quite brilliantly.’ 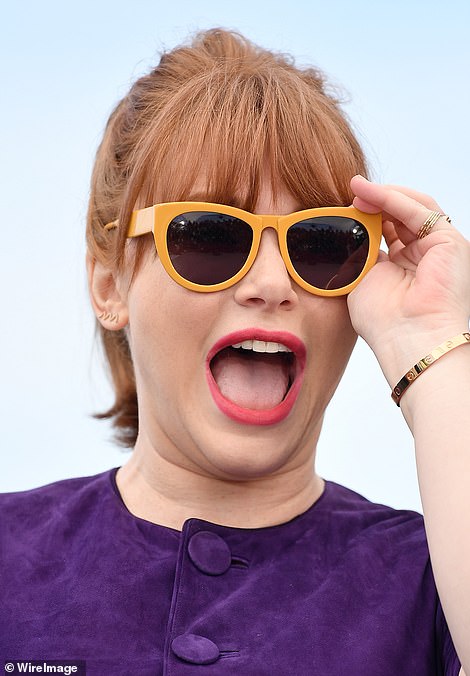 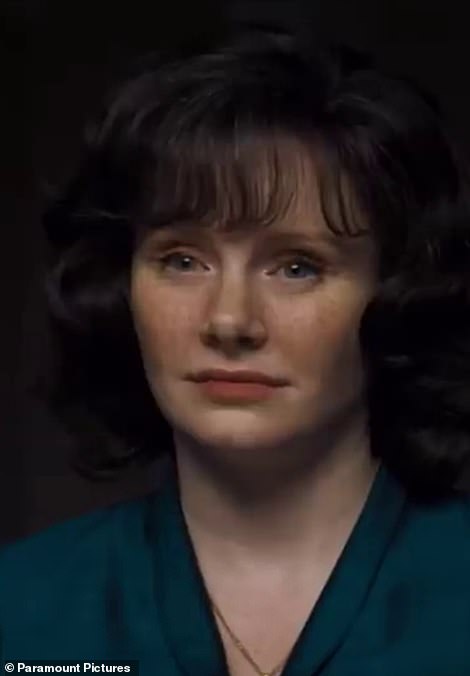 Specs appeal: Bryce seemed rather taken with her yellow sunglasses as she put on a giddy display, (left) and (right) as Elton’s mother Sheila in the film 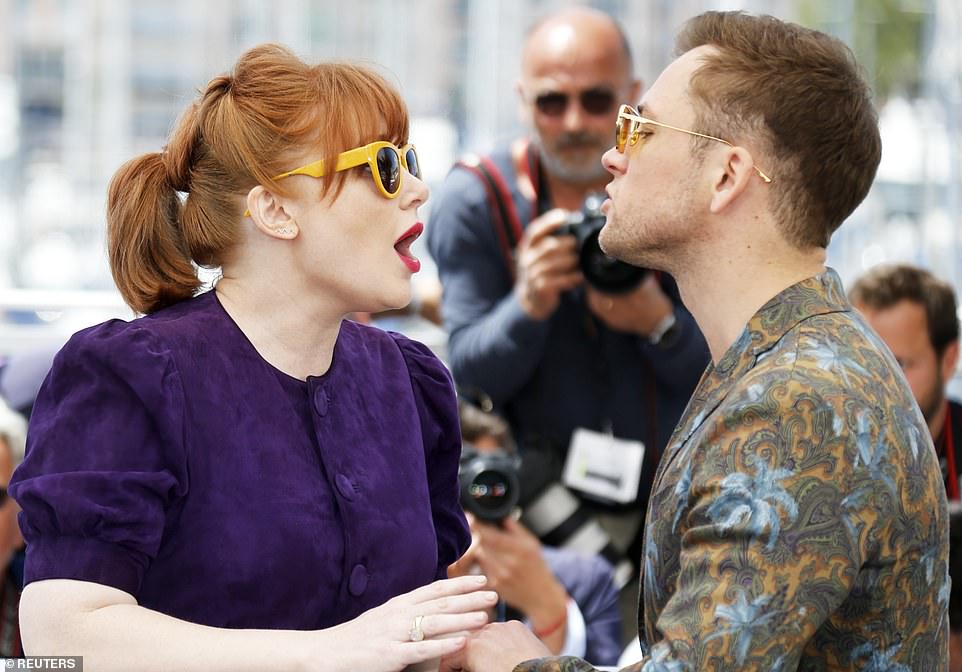 Snap happy: Bryce and Taron cooed over one another while surrounded by photographers 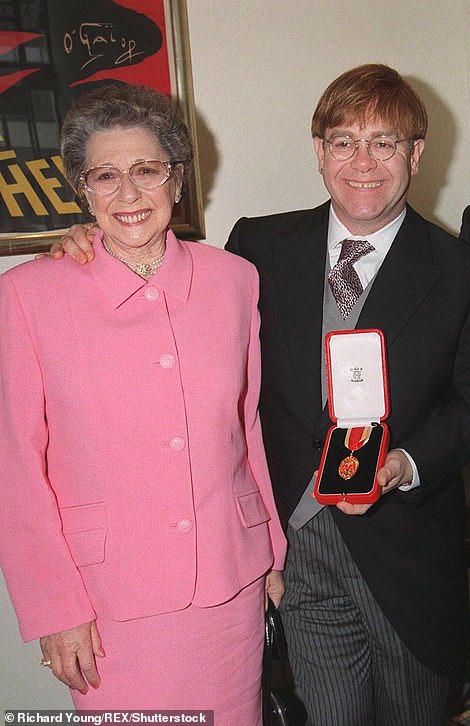 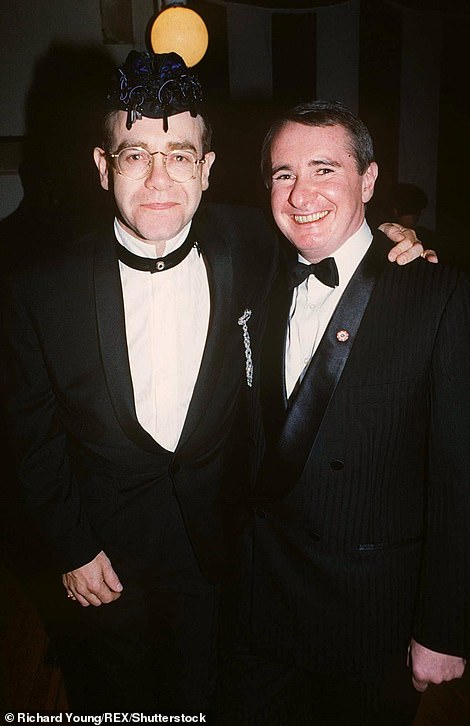 Special: Elton and his beloved mother Sheila, who is played by Dallas Howard, when he received his Knighthood in 1998 (left) – she passed away in December 2017 – and the musician with his former lover and manager John Reid, played by Madden pictured together in 1991 (right)

Elton then asked the Kingsman: The Secret Service star: ‘Did you find it difficult to sing them?’

To which Taron replied: ‘I think I would have found it harder if it wasn’t for the fact that you were so encouraging.

‘I think that was a big part of what was an enabler and facilitated me to feel kind of relaxed enough to do them in the way that we have, and, of course, Giles Martin, who produced them, who is just the most incredible man, who I didn’t know before this process. I know you did. I owe a lot of it to him, I think.’ 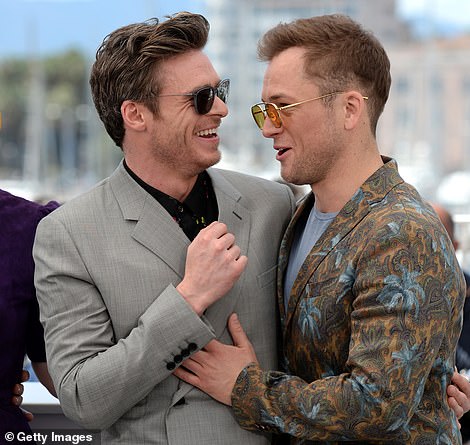 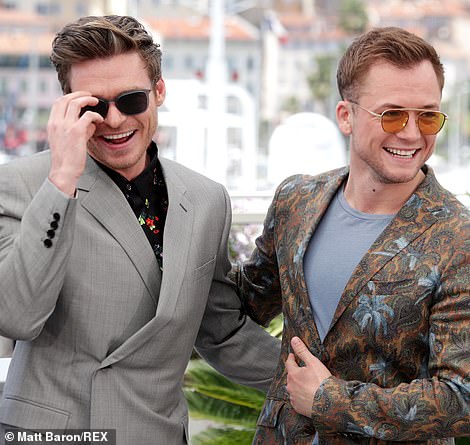 Getting along nicely: Richard and Taron appeared to be firm friends after building a bond on set 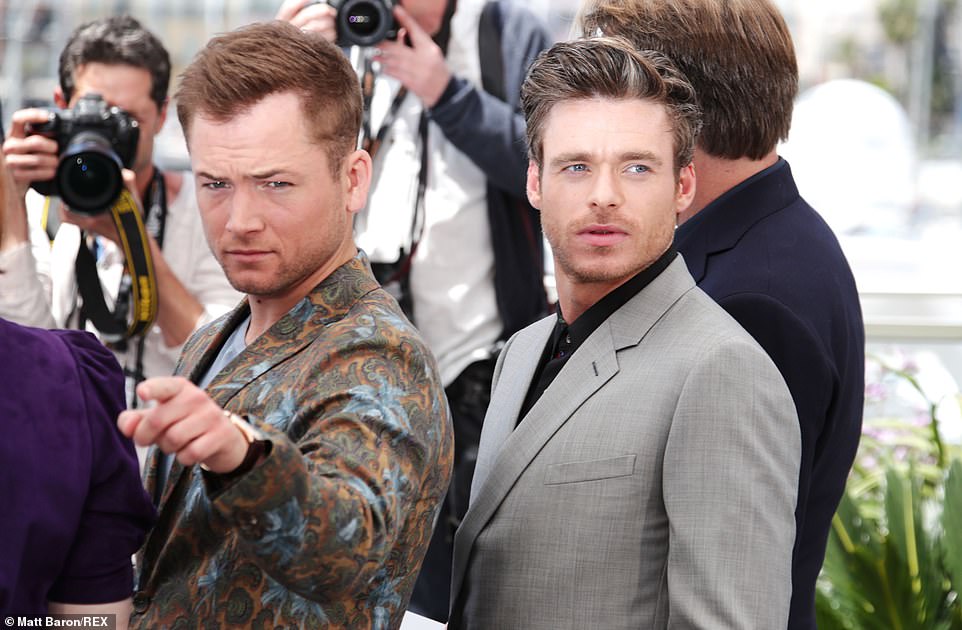 Dapper gents: Taron pointed at the camera, while The Bodyguard star Richard put on a smouldering display behind him 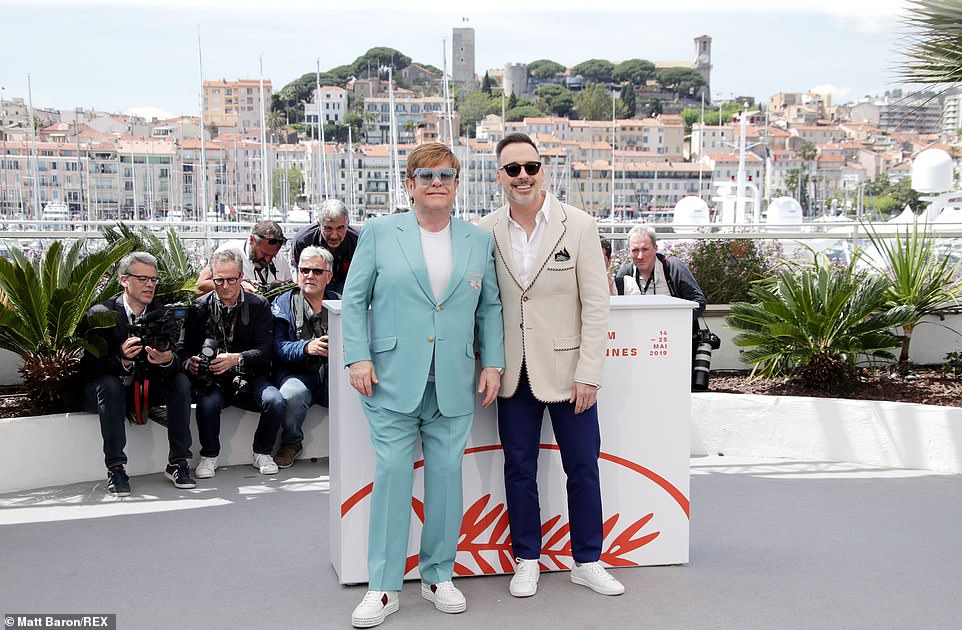 Love of his life: Elton and David have been a power couple for more than 25 years – they entered into a civil partnership in 2005 and after  the legalisation of gay marriage in 2014, the pair retroactively converted their civil partnership to a marriage 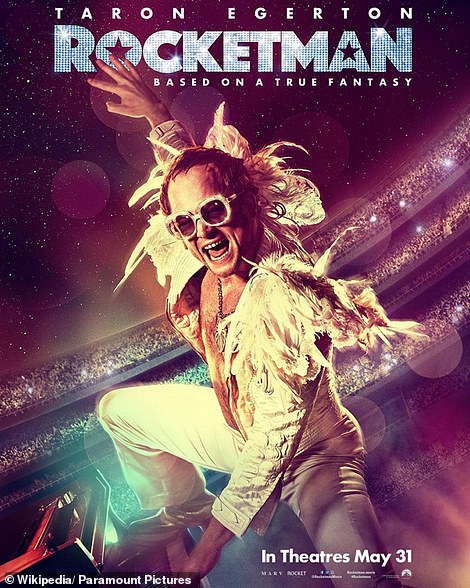 Stating the difference between the two leading men, he said: ‘It’s not Bohemian Rhapsody where the brilliant Rami Malek, who played Freddie, lip synced.

While Taron further highlighted the contrast between the films, adding: ‘Our film is different from Bohemian Rhapsody in the sense that we sing some of yours and Bernie’s songs, not only as performance pieces but as legitimate pieces of musical theatre.

‘I know you were always very keen on this idea of a fantasy. That’s what our movie is. It’s a musical fantasy.’

Meanwhile, Elton pin-pointed the moment he realised that Taron was the right person to portray him.

The star recalled how he knew the Robin Hood star could sing when he heard Taron’s rendition of I’m Still Standing in the 2016 animated film Sing, in which he played gorilla Johnny. 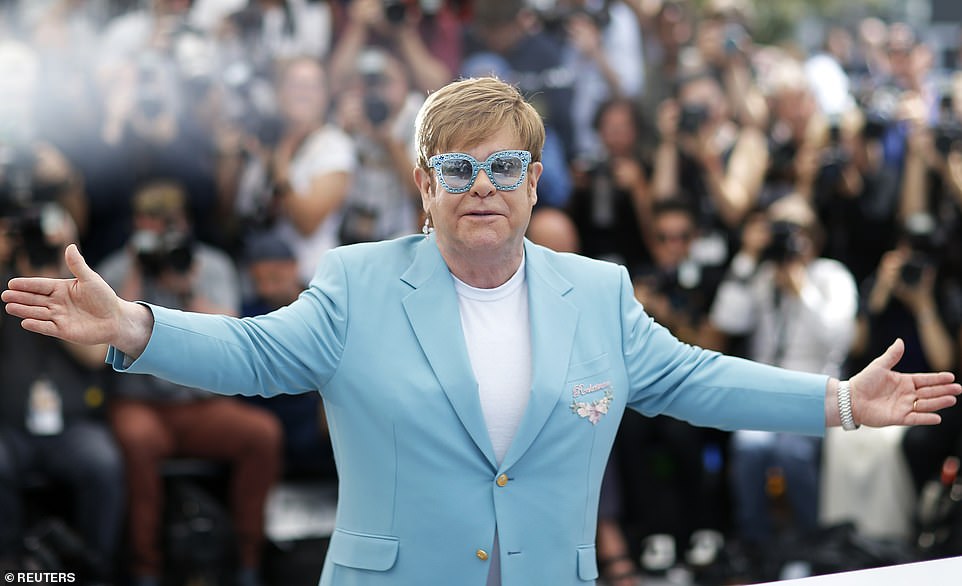 Arms out: Elton appeared delighted with the turn-out as he greeted his fans 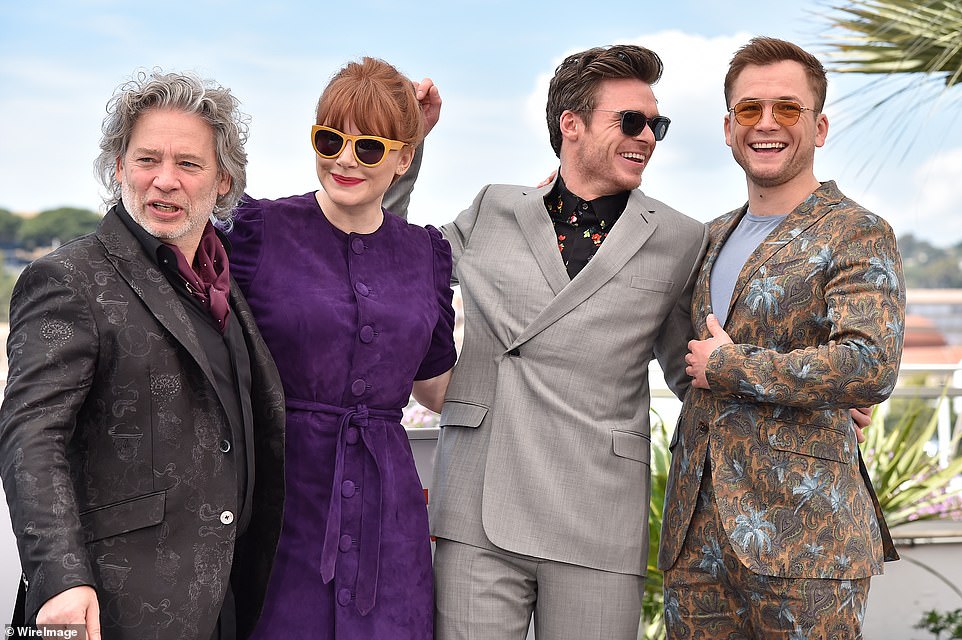 Getting along nicely: (L-R) Dexter, Bryce, Richard and Taron all appeared to be getting along well 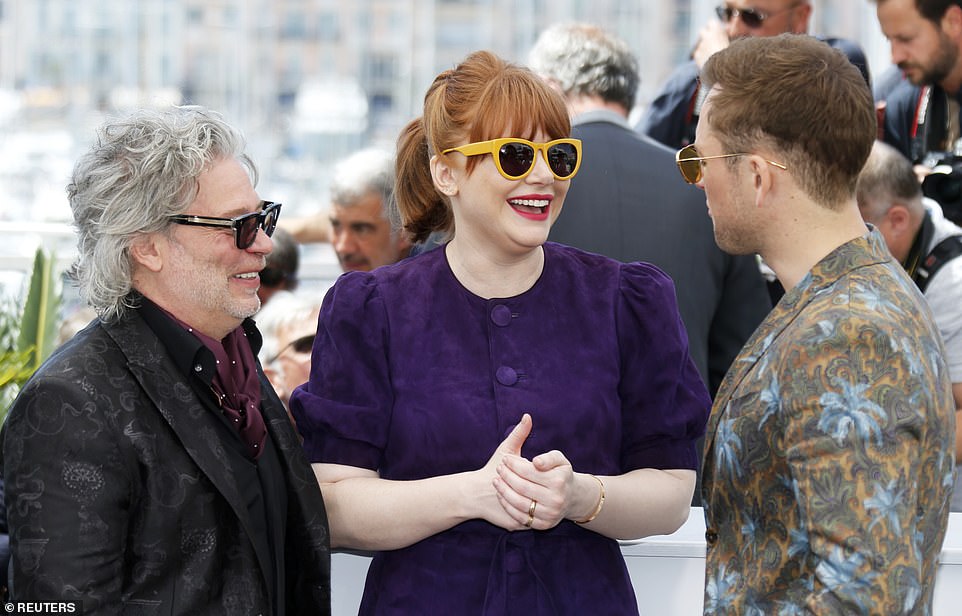 Laugh a minute: It was clear that the cast all get along well as they giggled throughout the photocall 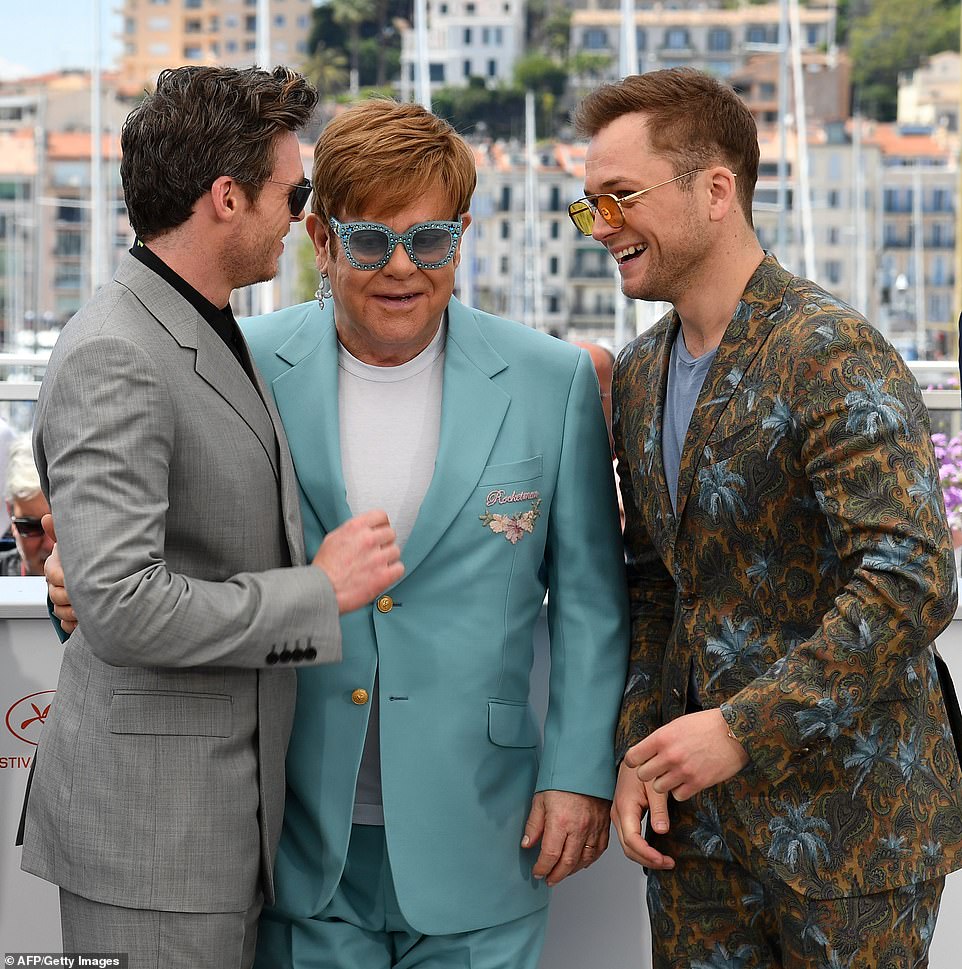 Hey Elton, guess what I heard? Richard whispered in Elton’s ear as Taron listened on 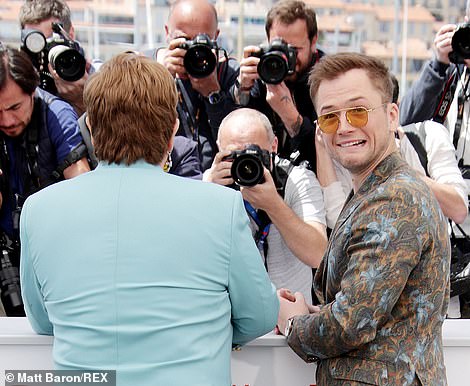 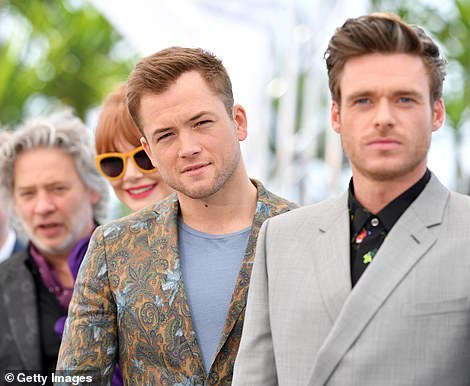 It’s ELTON! Taron still appeared to be rather star-struck by Elton, (left) before posing with Richard and Bryce

He said: ‘I didn’t get involved in any of it. I just let you go ahead … I knew you could sing because I heard ‘I’m Still Standing,’ which you did in the film ‘Sing’.

‘You’ve redone that in this film, so I think you should do an album of ten different versions of ‘I’m Still Standing.’ 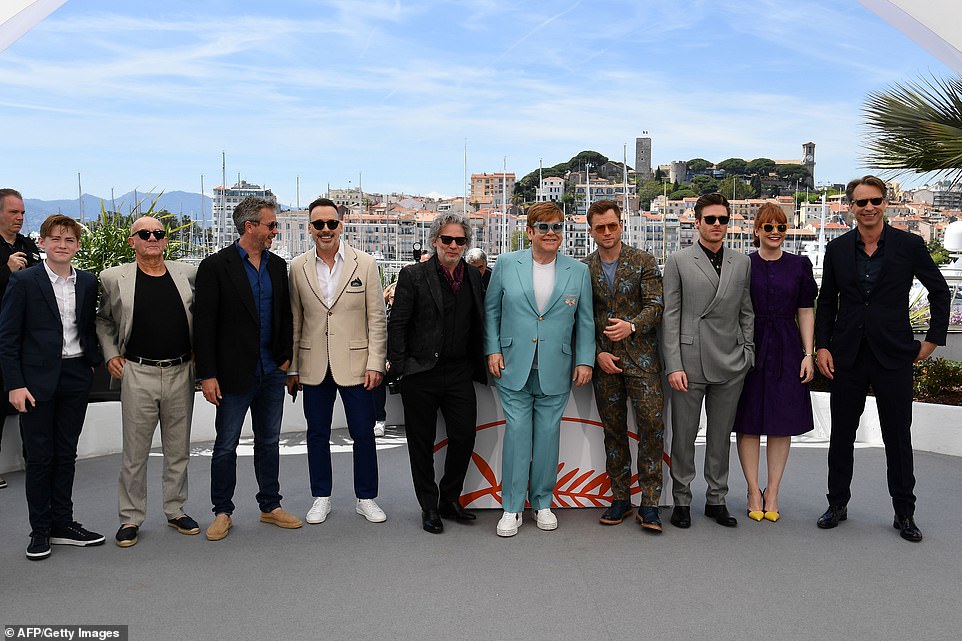 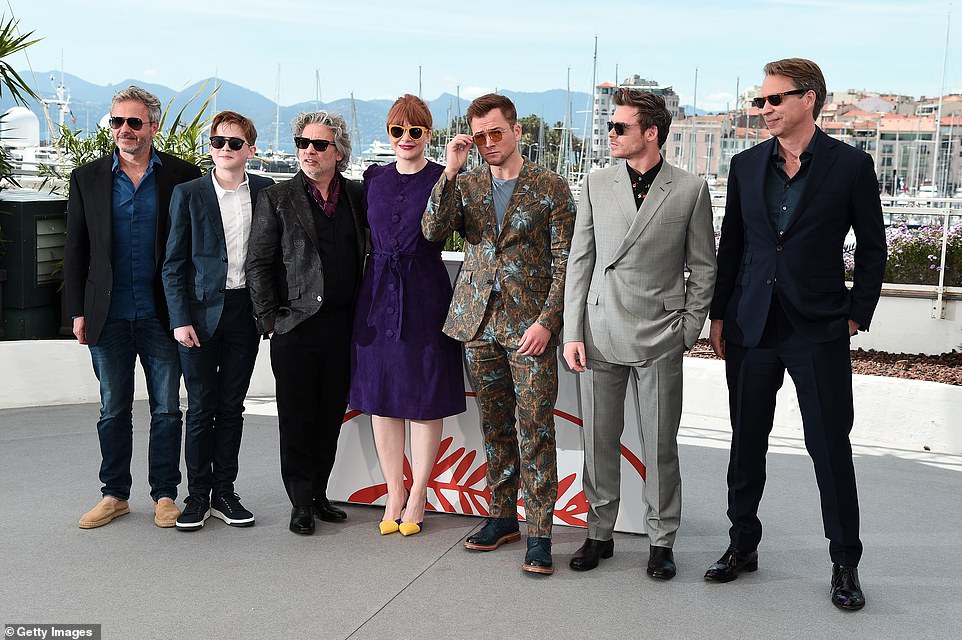 Shady: The cast and crew posed for a photo and all paid tribute to Elton by wearing sunglasses 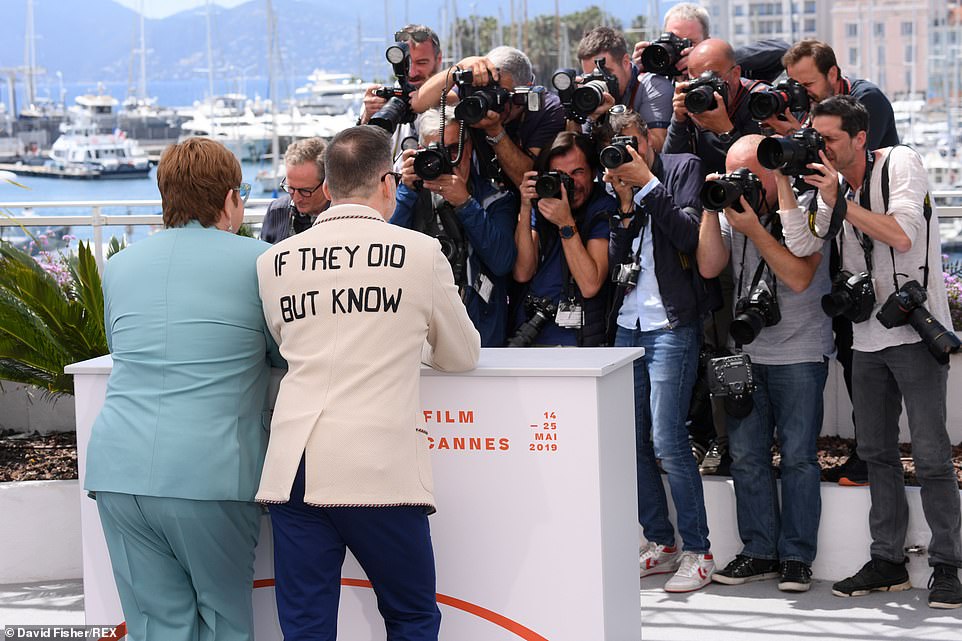 This is their moment: Elton and David were happy to pose for lots of photos on the day 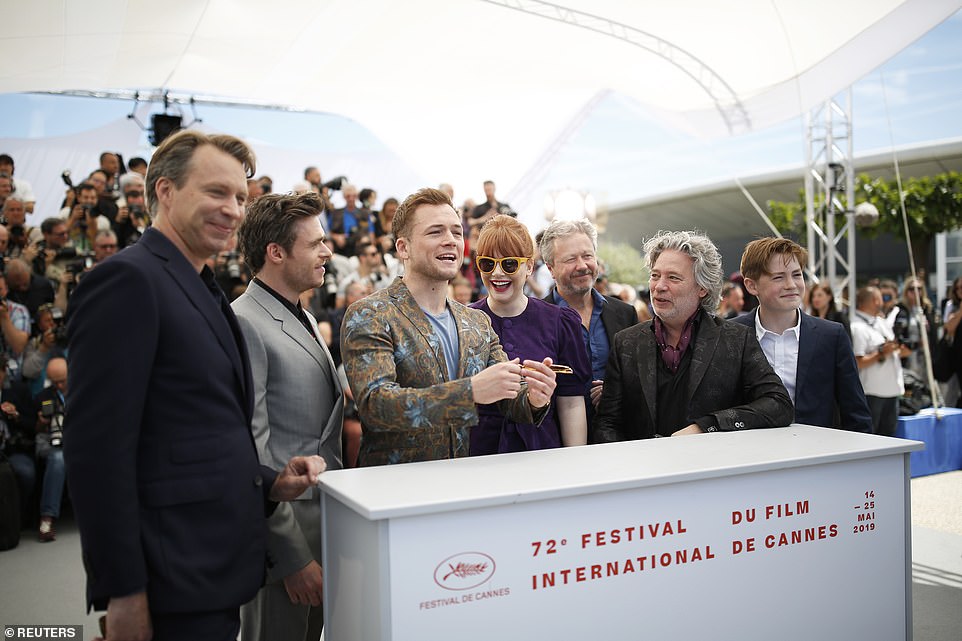 More to come: No doubt the cast and crew are looking forward to the premiere which will be taking place later that evening