An Elvis impersonating NASA scientist is one of three researchers flying over Greenland in a converted 1940s DC3 plane to study melting glaciers.

They are part of Oceans Melting Greenland (OMG), a mission that has flown around the vast island for four summers.

Researchers have been dropping probes to collect data on how oceans contribute to the rapid melt of Greenland’s ice and the rising sea levels that result.

Oceans Melting Greenland (OMG) is a NASA Mission led by JPL Scientist Josh Willis to understand the role that the ocean plays in melting Greenland’s glaciers.

From the sky and the sea, OMG gathers data about water temperatures and the glaciers all the way around Greenland to get a better idea of just how fast the ice is melting, and how fast global sea levels will rise.

Dressed in a blue jumpsuit and with thick sideburns that give a hint of his occasional pastime impersonating Elvis, Joshua Willis, 44, is the oceanographer from NASA’s Jet Propulsion Laboratory behind the project — and, along with his wife, its name.

‘We’re looking at probably metres of sea level rise in the next hundred years and that’s a huge threat to hundreds of millions of people around the world, so a bit of alarm and OMG is probably warranted,’ Dr Willis said.

Dr Willis and the crew took turns dropping the 1.5-metre cylindrical probes and watching as the data came in showing the ocean’s temperature and salinity.

As they did so,they passed over rocky fjords, dazzling glaciers and icebergs, some dozens of feet high looming out of the water,

Dr Willis is investigating how warmer layers of water off the coast come into contact with glaciers and how this effects how quickly they melt.

‘A lot of people think of the ice here as melting from the air warming, sort of like an ice cube under a hair dryer, but in fact the oceans are also eating away at the ice’s edges,’ Dr Willis said. 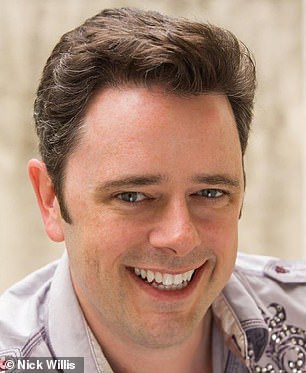 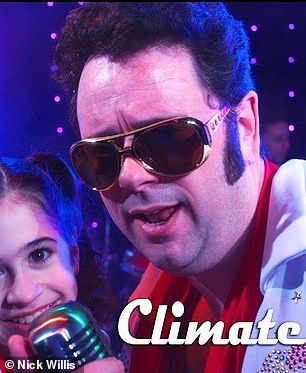 Joshua Willis, 44 (left), is the oceanographer from NASA’s Jet Propulsion Laboratory behind the project — and, along with his wife, its name. His blue jumpsuit for the mission and thick sideburns give a hint of his occasional pastime impersonating Elvis (right) 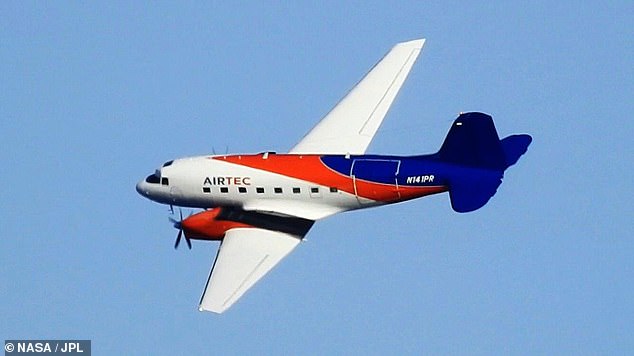 The research team is part of NASA’s Oceans Melting Greenland project, a mission that has flown around the vast island for four summers in this modified DC3 plane

OMG surveys Greenlandic glaciers in the winter, comparing it with the data they collect about the oceans in the summer over a five-year period, which Dr Willis hopes will allow researchers to better predict sea-level rise.

The island has three quarters bordering the Arctic ocean and is 85 per cent covered in ice — if this ice sheet were to disappear completely, it would raise the ocean level by seven metres (23 feet).

The Arctic region has warmed twice as fast as the global average, and Greenland, a resource-rich Danish possession, has become a focal point for climate research — as well an object of desire for US President Donald Trump, who scrapped a trip to Denmark over its dismissal of his attempts to buy the autonomous territory.

NASA – best know for the moon landings and space travel – started to study the earth’s climate in greater depth from the 1970s when its inter-planetary exploration budget was reduced, using its satellites to look at the earth.

Today it has more than a dozen satellites in orbit monitoring earth’s seas, ice, land and atmosphere, along with missions like OMG, which Willis hopes will provide data to give better predictions of sea-level rise around the globe.

At the rear of the refitted DC3, built in 1942 for the Canadian air force during World War II, project manager Ian McCubbin took his turn by a chute holding the plastic probe, waiting for the order to drop it. 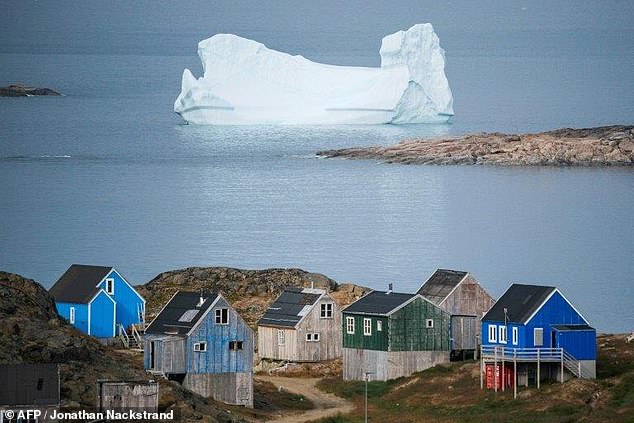 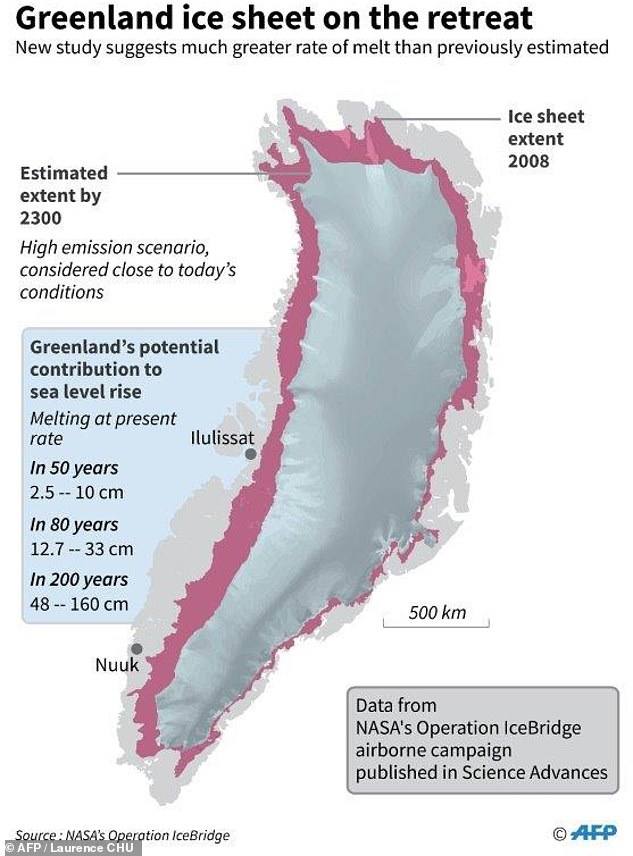 Sucked out into the cold air below, the four-foot cylinder parachuted into the water and after a nervous wait, started transmitting data to the team on the plane.

With 20 years’ experience flying with the JPL, McCubbin also organises the mission’s logistics from the remote airfields it flies out of during the summer.

‘Dealing with Greenland’s remoteness is a unique challenge,’ McCubbin said on a break between dropping probes, a baseball cap pulled down over his eyes.

Limited communications and transport links and the island’s unpredictable weather all make keeping the mission in the air more complicated, but McCubbin said he was happy to put up with the difficulties.

‘The relevance of this project makes it exciting to work on, given the importance to our society, our children, our children’s children,’ he said.

Ian Fenty, an investigator with OMG, sat in front of a laptop and a bank of electronics receiving the signals from the probes. 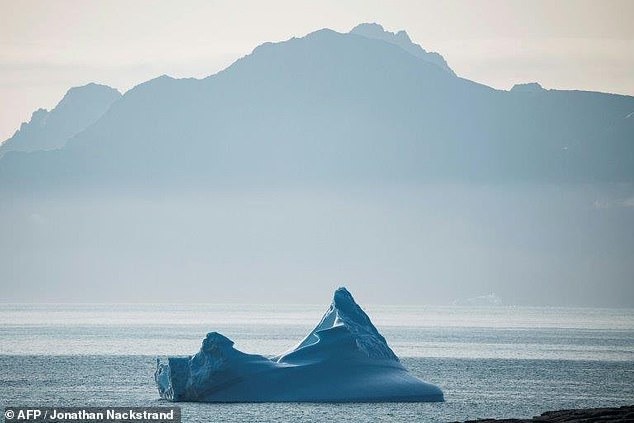 Researchers have been air dropping cylindrical probes. As they did so,they passed over rocky fjords, dazzling glaciers and icebergs. They then watched as the data came in, showing the ocean’s temperature and salinity

After each probe hit the water, data started to upload almost immediately onto the small screen on the laptop on the tray table in front of Fenty.

‘The data we’re collecting are super valuable because they’re allowing us for the very first time to quantitatively relate ocean temperature changes with the melting of the ice sheet,’ he said.

After two hours in the air along the coast of eastern Greenland, the plane turned and headed back to base at the remote village of Kulusuk, flying low over icebergs and pods of whales in the sea below.

After the flight, Dr Willis, wearing Ray Bans, a leather jacket with the collar turned up and a guitar, gave a performance of his Elvis-inspired ‘Climate Rock’ to diners and visiting journalists in the village’s hotel, explaining the difference between the weather and climate.

For Willis, the song, like his work with OMG, are all part of trying to get his message about climate change and sea-level rise across.

‘I feel like as a climate scientist I have a responsibility to explain what we’re finding to the world,’ he said.

‘We have some tough decisions ahead of us if we want to avoid the worst parts of climate change.’

Global warming is causing the temperatures all around the world to increase.

This is particularly prominent at latitudes nearer the poles.

Rising temperatures, permafrost, glaciers and ice sheets are all struggling to stay in tact in the face of the warmer climate.

As temperatures have risen to more than a degree above pre-industrial levels, ice continues melt.

For example, melting ice on the Greenland ice sheet is producing ‘meltwater lakes’, which then contribute further to the melting.

This positive feedback loop is also found on glaciers atop mountains.

Many of these have been frozen since the last ice age and researchers are seeing considerable retreat.

Some animal and plant species rely heavily on the cold conditions that the glaciers provide and are migrating to higher altitudes to find suitable habitat.

This is putting severe strain on the ecosystems as more animals and more species are living in an ever-shrinking region.

On top of the environmental pressure, the lack of ice on mountains is vastly increasing the risks of landslides and volcanic eruptions.

The phenomena is found in several mountain ranges around the world.

It has also been seen in regions of Antarctica.