Jackie Trad has fallen on her sword, resigning as Queensland’s deputy premier and treasurer.

The announcement came less than 24 hours after she announced she was temporarily standing down from ministerial duties while she faced her second integrity probe in 12 months.

Health Minister Steven Miles has been appointed deputy premier, Cameron Dick will take on the role as treasurer and Kate Jones will manage state development.

Craig Crawford will become the new minister for Aboriginal and Torres Strait Islander affairs, while Gladstone MP Glenn Butcher has been promoted from the outer ministry.

Premier Annastacia Palaszczuk unveiled her new-look cabinet on Sunday, saying they were permanent appointments that would remain in place until the state election later this year.

‘This is 100 per cent what Queenslanders expect of myself and my team, to be focused on dealing with the health and economic crisis we have before us.’

Queensland’s Crime and Corruption Commission on Saturday confirmed it was investigating Ms Trad over allegations she interfered in the selection process for the principal of a new high school in her South Brisbane seat.

Ms Palasczcuk said Ms Trad’s decision to resign was based on the best interests of her family, the community and the party.

‘She does not want there to be any distraction for the government as we respond to the COVID-19 crisis,’ she said.

The premier would not be drawn on the investigation or whether she supported Ms Trad to stand again, except to say: ‘I support all of my team recontesting the next election’. 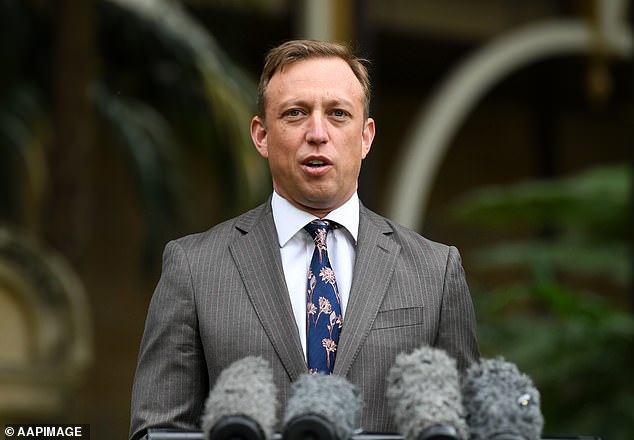 Earlier this year Ms Palaszczuk said it was widely known that Ms Trad had damaged her own government.

The remark was made after it was revealed her deputy failed to properly declare a $695,500 home she bought in March 2019, located near the Cross River Rail project she was overseeing at the time.

Queensland’s corruption watchdog looked into the matter but found no evidence to support a reasonable suspicion of corrupt conduct.

However, it did push for changes to the way conflicts of interest are dealt with, including criminal penalties if MPs fail to declare such conflicts and don’t update their register of interests.