Emergency services close M25 in both directions near Surrey

There are 90-minute traffic jams on the M25 after a major crash involving two lorries and a van.

An air ambulance has taken one man to hospital after landing in the carriageway between junctions 8 and 9 near Leatherhead in Surrey.

Emergency services are currently on the scene following injuries to three drivers and a large oil spill.

The driver of one of the lorries was taken to St George’s Hospital in Tooting, while the occupants of the other vehicles suffered minor injuries.

Surrey Police tweeted: ‘We are at the scene of a serious collision on the #M25 just prior to the J9 slip road on the clockwise carriageway. 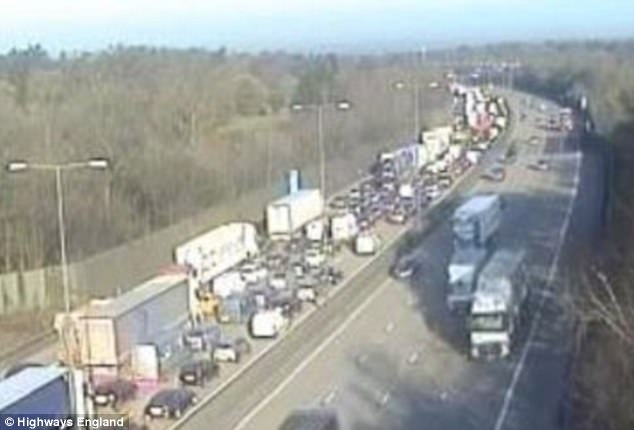 Emergency services are currently on the scene, with reports of several injuries and a large oil spill

‘There is a considerable fuel spill. Air Ambulance on scene.’

Police have opened up a single lane in order to allow traffic to move past.

In another tweet, Surrey Police added: ‘There is a considerable fuel leak across all 4 lanes.

‘This is both very dangerous especially to motorcyclists and if not cleared will cause damage to the road surface. We thank you for your patience.’

Motorists have been told to expect long delays into the afternoon, with some already tweeting of waits lasting several hours.

England cricketer Jason Roy said: ‘3 hours since I left home. Travelled 10 miles and I’m still parked on the M25!! What a morning.’

User @Yoana_ve said: ‘@THORPEPARK We are stuck for 3 hours on the m25 to get to you.

‘Please help us out with the tickets! We wanted to celebrate our anniversary of 1 year. We booked for 2 days and the first day is ruined by this major accident.’

And @lillyplop wrote: ‘Actually been stuck on the M25 for 2.5 hours. Need a toilet.

‘Like now. Starving hungry. Please dudes keep it in your pants, I don’t want to see it.’ 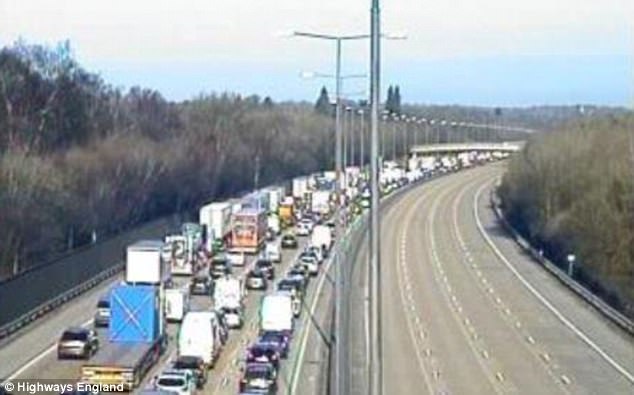 Police are currently trying to open up a single lane in order to allow traffic to move past, however oil is understood to have covered all four carriageways