The first goal was hugely important at the Stadio San Paolo, where a hostile atmosphere was awaiting the visitors.

If Arsenal got it, it could kill the tie, and they did just that. Unai Emery reaped the rewards for his bold team selection against Napoli.

It was a statement from the Spaniard in his 50th game in charge of the club to use both Alexandre Lacazette and Pierre-Emerick Aubameyang up front.

He wanted that away goal. It was the first time those two had started together in an away game since against Manchester City in February.

It was brave from the Arsenal boss, but it paid off. This was a professional performance from the Premier League side, and the free-kick from Lacazette was a piece of quality.

The Napoli goalkeeper Alex Meret helped him out greatly by taking a step to his right but it was still a fine finish. 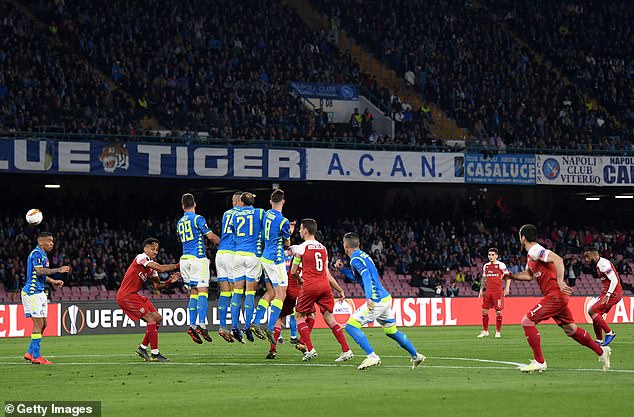 One downside from this trip was the loss of Aaron Ramsey to what appeared to be a hamstring issue. The Wales international was outstanding in the first leg. He put in the hard work and pulled the strings at the Emirates Stadium.

Considering he is heading for Juventus, putting in a good performance against Napoli is not a bad way to endear yourself to your new Italian fans.

He did that before he went off 34 minutes into this tie. Ramsey has always had the right attitude, even when he has been out of the team.

He is a role model for the young players at Arsenal. It is such a shame that he is going to leave the club.