The wife of an Army sergeant accused of trying to murder her twice painted a ‘worse picture’ of him to police because he cheated on her with two women, a court heard today.

Victoria Cilliers wanted to ‘cast suspicion’ on her husband Emile, 37, who is accused of trying to kill her with a gas leak before tampering with her parachute before a skydive six days later.

The 42-year-old survived spiralling to earth at high speed after she cut away her main parachute and her reserve chute failed – but today denied any suggestion she may have tampered with it herself to frame him.

She survived with a broken pelvis, broken ribs and fractured vertebrae and Mrs Cilliers said today a ‘red mist’ descended in an interview with police shortly after the fateful jump from a plane on Easter Sunday, April 5 2015.

Six days earlier her husband allegedly tampered with a kitchen gas valve at home in another attempt to kill her.

She said: ‘Given that I had just been informed that everything I had suspicions of was a reality, as regards my husband, I was just out of hospital, on medication … the red mist came down, I was gunning for him in the interview, but I did feel I brought out anything and everything.’

She added: ‘I wanted him to suffer’. 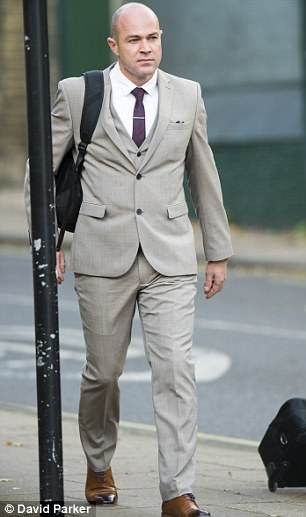 Victoria Cilliers wanted to ‘cast suspicion’ on her husband Emile, 37, who is accused of trying to kill her with a gas leak and then tampered with her parachute before a skydive 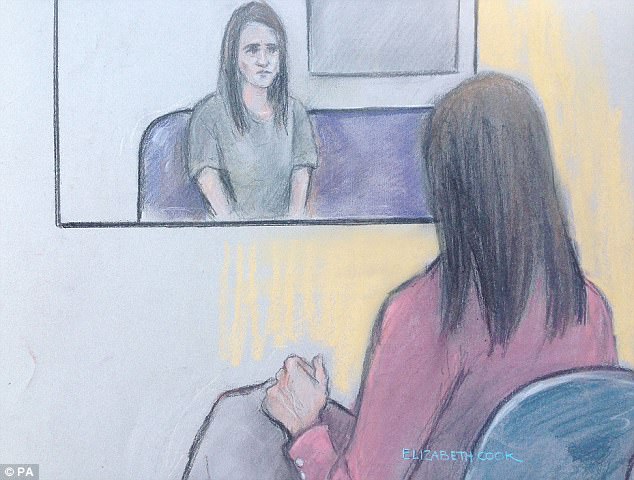 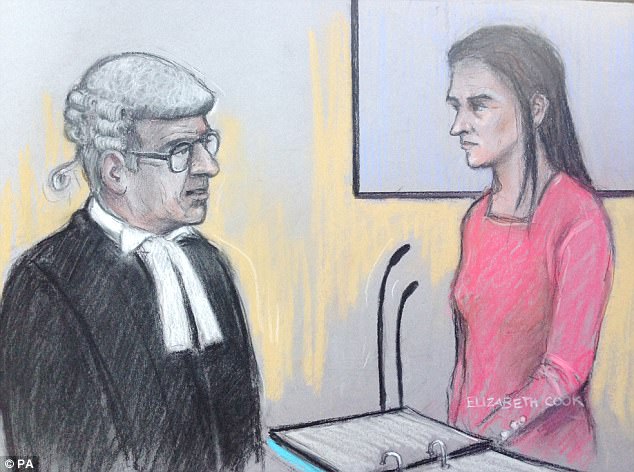 Mrs Cilliers said ‘No’ when Prosecutor Michael Bowes QC asked her: ‘Did you tamper with the reserve in any way?’

The prosecutor then said: ‘So if it turns out it is to do with deliberate human intervention, it’s nothing to do with you, is that your evidence?’

Emile Cilliers is accused of taking the parachute with him to the hangar toilets the day before and allegedly twisting the lines of the main parachute and removing slinks from the reserve.

Six days earlier he allegedly tried to kill his wife by deliberately causing a gas leak. 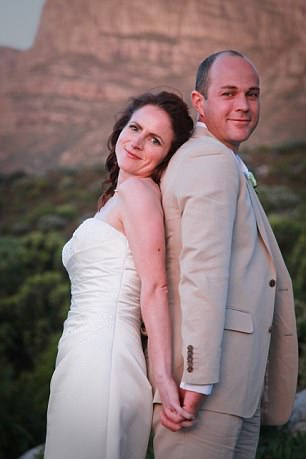 Skydiving instructor Mrs Cilliers told officers that she found it ‘odd’ her husband (together on their wedding day) had taken her hire parachute kit into the toilet at Netheravon Airfield, on Salisbury Plain, Wiltshire, the day before the jump

Skydiving instructor Mrs Cilliers told officers that she found it ‘odd’ her husband had taken her hire parachute kit into the toilet at Netheravon Airfield, on Salisbury Plain, Wiltshire, the day before the jump.

Mr Bowes questioned her over her description of the events, when she told police he had been with the parachute for ‘five-10 minutes’.

The jury at Winchester Crown Court heard she had learned by that point that Cilliers, 37, had been arrested for attempted murder and also that he had been having an affair.

When Mr Bowes asked her if she was being truthful, she replied: ‘I was not particularly bothered.’

Suggesting she knew the significance of Cilliers’ toilet trip, Mr Bowes said: ‘I’m going to suggest it’s very, very unlikely that you could not be bothered to be accurate. What are you saying?

Mrs Cilliers said: ‘I expanded on a truth but I knew potentially that was a key point that was going to get him into some hot water.

Mr Bowes asked her why later in the same interview, she appeared to go back on the implication he had been the cause, to which Mrs Cilliers replied: ‘I’m not going to be too blatantly obvious about it.’

When the prosecutor questioned whether she was saying she had been trying to frame him, she said: ‘I’m saying I wanted to cast suspicion on him. I was wanting revenge. I had been ridiculed.

‘I wanted them (police) to investigate him. I did not know the full extent at that point.’ 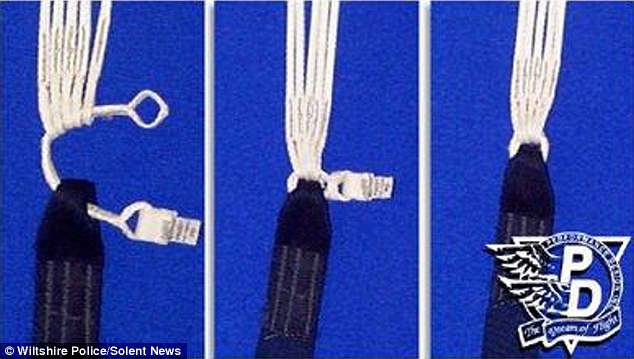 Two slinks, which attach the lines of the canopy to the rest of the rigging, were missing from one side of the parachute, the court heard, and Mrs Cilliers and the prosecution says this means it couldn’t be an accident

Mr Bowes then suggested that she was in fact, by her nature, scrupulously fair, and had been in the police interview.

It was my last jump, says skydiver whose husband is on trial for attempted murder

The wife of an Army sergeant accused of trying to murder her by tampering with her parachute said she had decided before the fateful jump it would be her last.

Victoria Cilliers said she considered the skydive on Easter Sunday, April 5 2015, a ‘test’ of her will to continue to be an instructor.

The 42-year-old survived spiralling to earth at high speed after she cut away her main parachute and her reserve chute failed.

Her husband Emile Cilliers is accused of taking the parachute with him to the hangar toilets the day before and allegedly twisting the lines of the main parachute and removing slinks from the reserve.

The jury at Winchester Crown Court heard a third police interview Mrs Cilliers gave in August 2016, in which she said: ‘It probably was going to be my last jump.

‘It was something Emile fully supported.’

Explaining to officers her feelings in the lead up to the jump, she said going back to skydiving after becoming a mother was a ‘mental battle’.

She said: ‘It’s hard to give up a massive part of you – it’s part of my identity.

‘I knew I wanted to jump sooner rather than later.

Before the jump she said she had been up ‘most of the night’.

She added: ‘The point where I got on the aircraft, I was in tears for most of the ride.

‘When I jumped out I was absolutely terrified, which was hard for me to admit because it was something I had done thousands of times.

‘I just did not want to be there any more.’

Earlier, the court heard Mrs Cilliers told officers she requested the further interview because she had wanted to paint a ‘bad picture’ of Cilliers in her testimony during the interview shortly after the incident in May 2015.

She said: ‘I feel angry about the initial interview – I felt like it was the worst possible time’.

Asked by a detective if anything she had said was untrue, she said: ‘I don’t think I lied.

‘There are certainly some aspects I don’t think he was involved with … it just painted a worse picture, which I think anyone would do in my situation.’

In her May interview with police, Mrs Cilliers said that when she found out about her husband’s affair, she was ‘angry’.

The physiotherapist told officers: ‘The person I thought I knew does not appear to exist, which is weird.’

Asked how she felt, she added: ‘Empty, alone, angry that all the time over the years I’ve had my little suspicions and niggles, and he has made me feel really bad and blamed my past insecurities.

‘My intuition was right, that makes me angry and upset. What I thought was a reasonable relationship and family, he’s just torn apart.’

She also told officers she doubted whether the main parachute had malfunctioned because she had ‘completely’ lost confidence in her ability.

She said: ‘You have more confidence in your reserve parachute. I’m an instructor, noone is going to question why I cut it away.

‘It was more my mental state. I cannot categorically say the main was a malfunctioning parachute.’

She said she agreed with others when they suggested the reason the main parachute failed was as a result of the lines being twisted during packing, because she was ’embarrassed’.

She added: ‘I was quite embarrassed to admit I potentially cut away a reasonable parachute, but I just completely lost confidence.’ 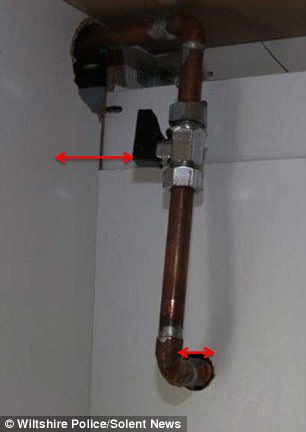 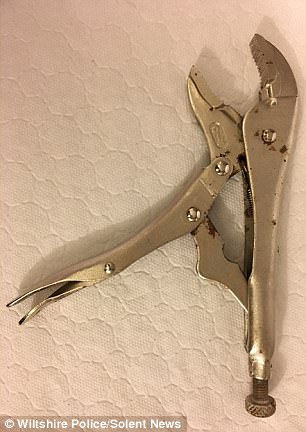 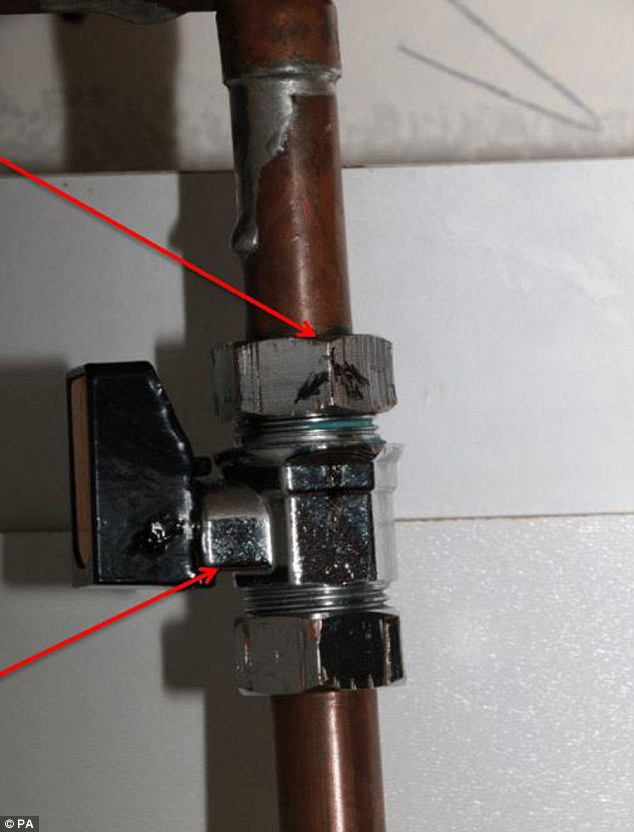