No more chocolate, no more Nando’s but Emile Smith Rowe will feel it’s all worth it.

As the Arsenal forward stepped out to train at St George’s Park on Tuesday for the first time as a senior England international, he may have reflected on all the sacrifices he has made.

None more so than having to ignore his sweet tooth.

‘I didn’t used to eat that well to be honest,’ explained Smith Rowe, who still lives with his mum. ‘I used to get cramp after 60 minutes and stuff.

‘I wasn’t eating great, I wasn’t drinking that well, before games I wasn’t really that hydrated. But I’ve tried to focus so much on it.

‘Chocolate. I like Nando’s a lot. But I’ve tried to cut out chocolate and takeaways as much as I can. I’m always eating from home now.’

Arsenal have facilitated Smith Rowe’s clean lifestyle where they can, providing the young forward with his own personal chef.

‘He’s got a couple of pasta dishes and that’s good. I didn’t used to like fish but now I am into salmon and stuff,’ he said. ‘My mum normally cooks but she doesn’t have to cook any more!’ 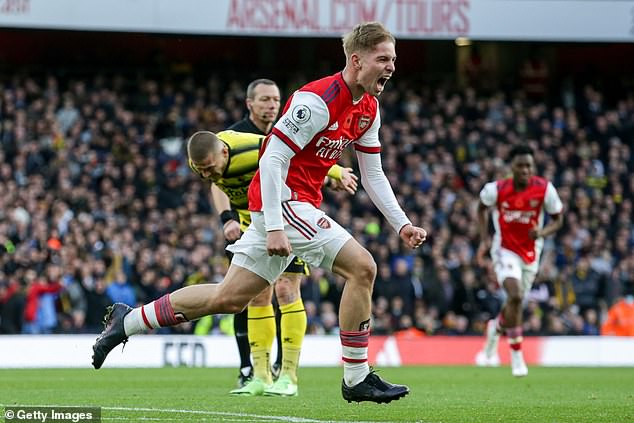 The club can only do so much, of course. But there is every motivation for Smith Rowe to maintain his discipline after a landmark week in which he scored the winner for Arsenal against Watford — his third Premier League goal in as many matches — before being called up by Gareth Southgate.

The 21-year-old certainly hasn’t had everything his own way in his career. Being rejected by Chelsea in his teens because he was too scrawny came as a huge blow. Moving to Red Bull Leipzig on loan as an 18-year-old and hardly playing because of a niggling groin injury that was eventually diagnosed as growing pains took its toll.

But it has all led to this: Smith Rowe on the verge of playing for his country. 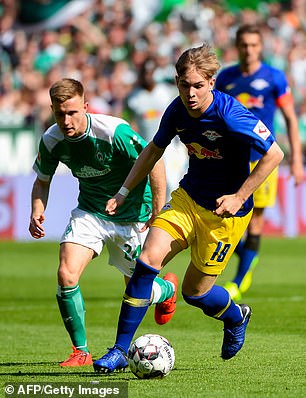 ‘I was playing for my local team and one of my mates got called into Chelsea,’ he recalled. ‘His mum, funnily enough, knew one of the scouts and he said, “One of my team-mates is quite good, have a look at him”.

‘So I went in for about three or four weeks, but at the time I was quite small, really skinny and just kept getting pushed off the ball. Everyone was so physical.

‘I wasn’t getting involved and touching the ball enough. That’s what it felt like at the time, why I didn’t get in.

‘But these things happen. I went to Arsenal and it was more about passing the ball and linking up with each other.

‘They didn’t seem to bother about my physicality but as I’ve grown up I’ve got stronger.

‘Leipzig, that was a frustrating period. I moved to Germany by myself as well, my family couldn’t come out. It was tough. I was just working each day, not knowing what to do. It was tough but I don’t regret going there at all.

‘I learned so much, a different environment, a new language, new players and manager. It definitely made me more of a man as well.’ 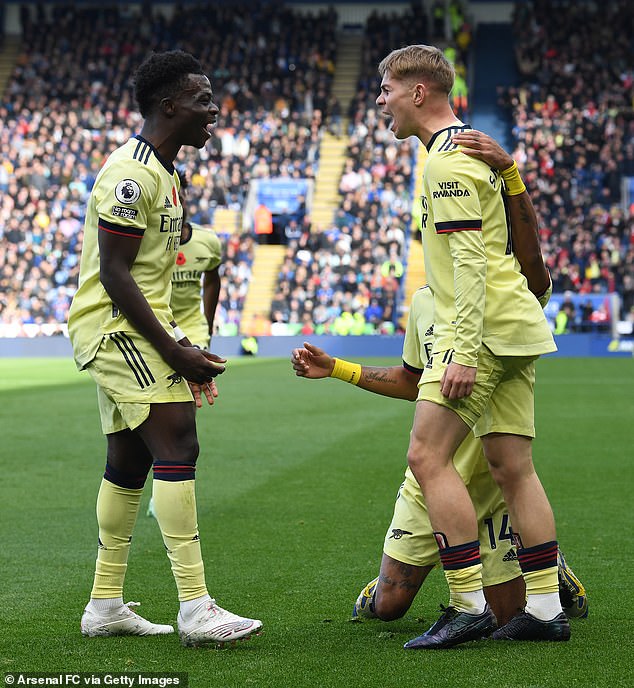 Smith Rowe is right to have no regrets. Along with England colleague Bukayo Saka, he is the jewel in the Arsenal academy’s crown. The pair are regulars for the Gunners and if they continue their upward trajectory they will be fixtures in the England team soon enough. It could, however, have been so different.

‘Tottenham were interested when I was about 15 or 16,’ said Smith Rowe. ‘But I wasn’t that interested to be honest, being an Arsenal fan. My dad is a Spurs fan.’