Missing footballer Emiliano Sala’s father has pleaded with investigators to salvage the wreckage of his son’s plane from the English Channel so they can ‘rescue’ his son and his family can finally get answers.

Heartbroken Horacio Sala thanked search teams who located the doomed aircraft 220ft down on the seabed yesterday and now hopes they can ‘find out what happened’ and ‘have some degree of certainty.’

A haunting image of the wreckage was released by the Air Accident Investigation Branch yesterday, as the agency revealed it contains the body of either Sala or his pilot David Ibbotson.

Marine scientist David Mearns’ team found the plane nearly two weeks after it disappeared after he volunteered to help the Sala family for free after initial search and rescue efforts by a number of agencies failed. 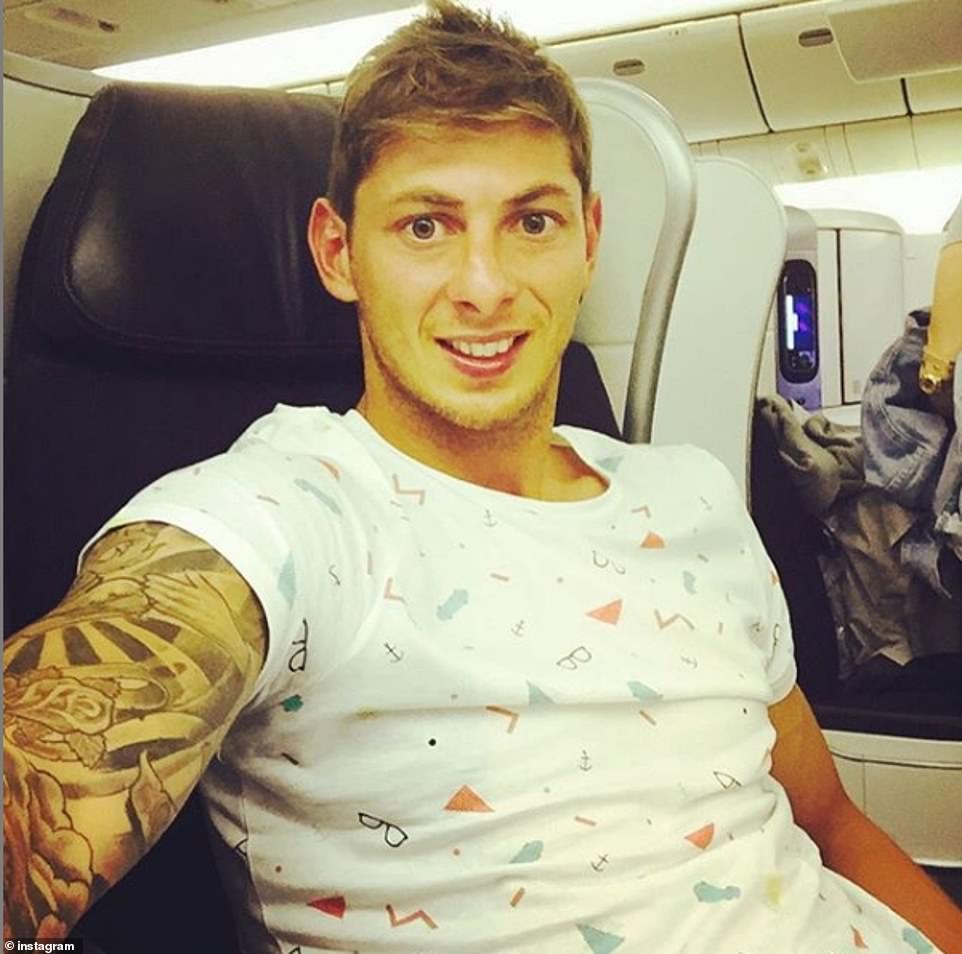 Mr Sala said: ‘We hope that they can rescue him as soon as possible in order to find out what happened, or at least to have some degree of certainty.

He acknowledged ‘all the players that have contributed and given money because it was an expensive search’ and added he’d like to ‘thank all the people that have supported everyone.’ 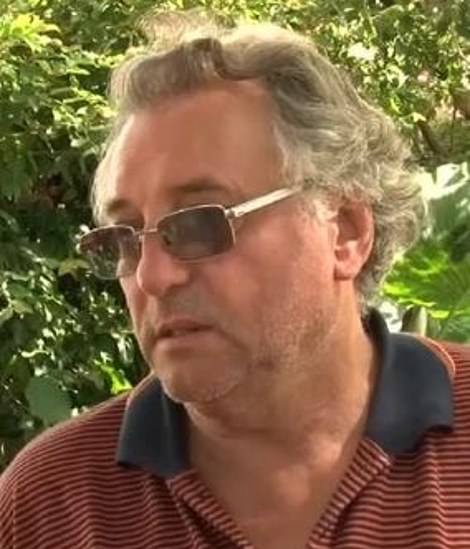 Mr Mearns told ITV News the Sala family are ‘desperately hoping’ for a salvage operation as they believe it was ‘the only route to get the answers about what had happened and why this plane had crashed.’

Mr Mearns tweeted this morning: ‘I would like to acknowledge the team from A-2-Sea Solutions Ltd of Southampton who pulled out all the stops to get the FPV MORVEN rapidly mobilised and repositioned to Guernsey.

‘The team performed very well and the Sala family are very thankful for their efforts.’

An AAIB spokesman said yesterday after video footage of the plane was released: ‘Tragically, in video footage from the ROV, one occupant is visible amidst the wreckage.

‘The AAIB is now considering the next steps, in consultation with the families of the pilot and passenger, and the police’.

The new image of the plane shows the rear left side of the fuselage, including part of the aircraft registration, N264DB.

The statement added: ‘The AAIB is now considering the next steps, in consultation with the families of the pilot and passenger, and the police.’

The families of the £15million striker and his pilot Mr Ibbotson are still waiting to hear whose body is in the fuselage of the Piper Malibu that vanished in a storm two weeks ago.

Sala’s bereft father who is still in Argentina and has not joined his ex-wife, son and daughter in Britain, told reporters yesterday when the plane was first located: ‘I cannot believe it …. this is a dream … a bad dream … I’m desperate’.

The coastguard abandoned their search last week after ruling out any survivors of the air crash with the footballer’s family brought in a celebrated shipwreck hunter to lead the search. 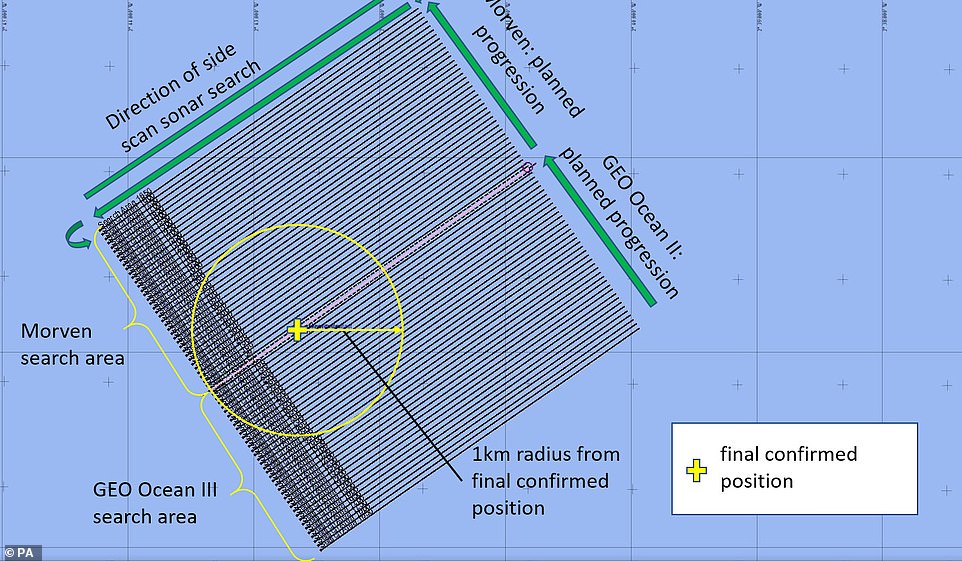 Mr Mearns and his team, working in conjunction with the AAIB, found the remains of the plane within two hours of starting their search.

He said he had stayed in regular contact with the Sala family by text message because of the language barrier.

He said: ‘Now their worst fears are confirmed, so I would imagine they would be just as devastated – it’s going to take a long time for them to come to terms with the loss.’ 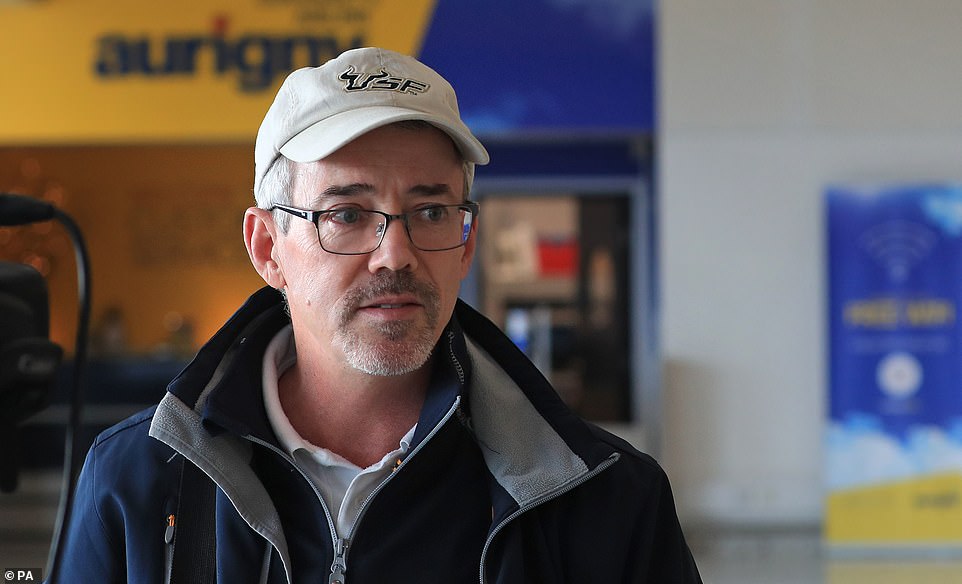 Marine Scientist David Mearns, is interviewed by reporters as he leaves Guernsey after he helped discover the wreckage of the plane that was carrying footballer Emiliano Sala 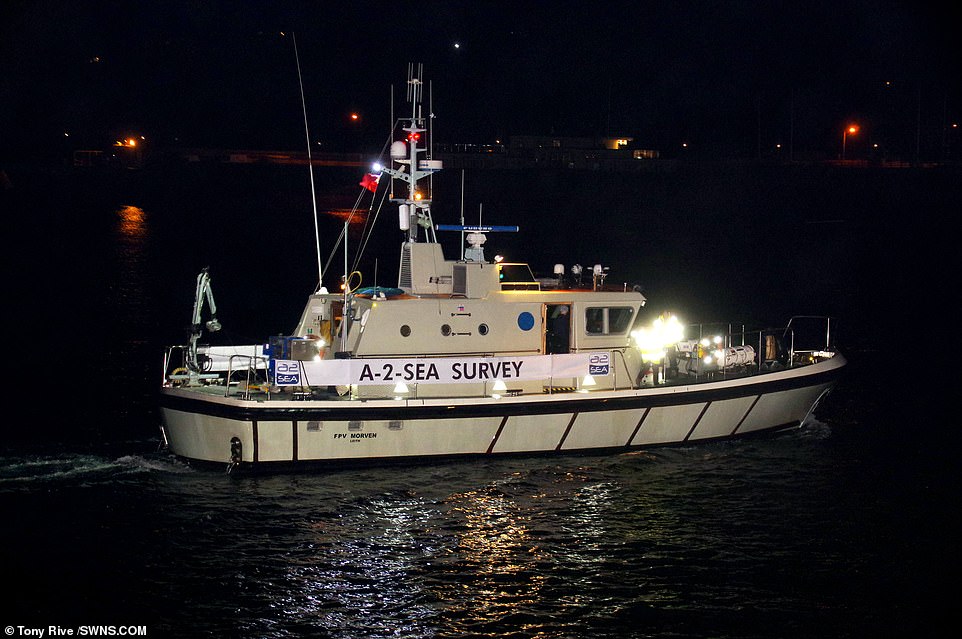 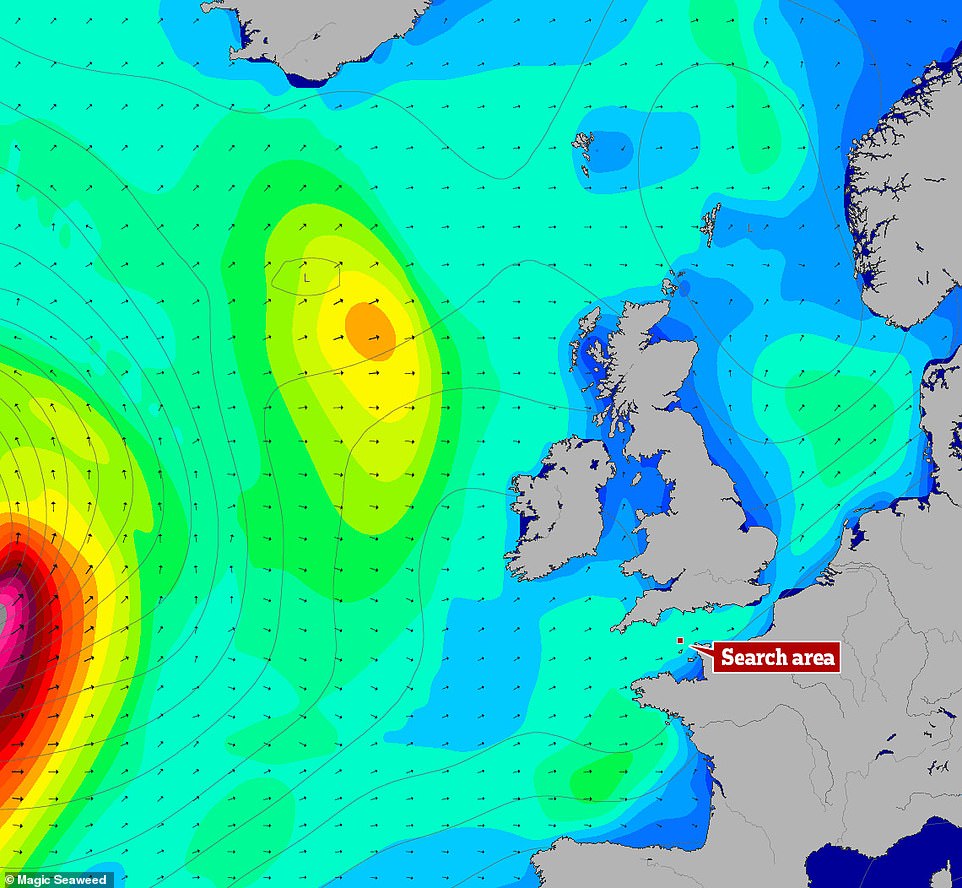 Midday today: Poor weather and high seas could hamper the recovery operation with an approaching storm shown in red on the left of the image 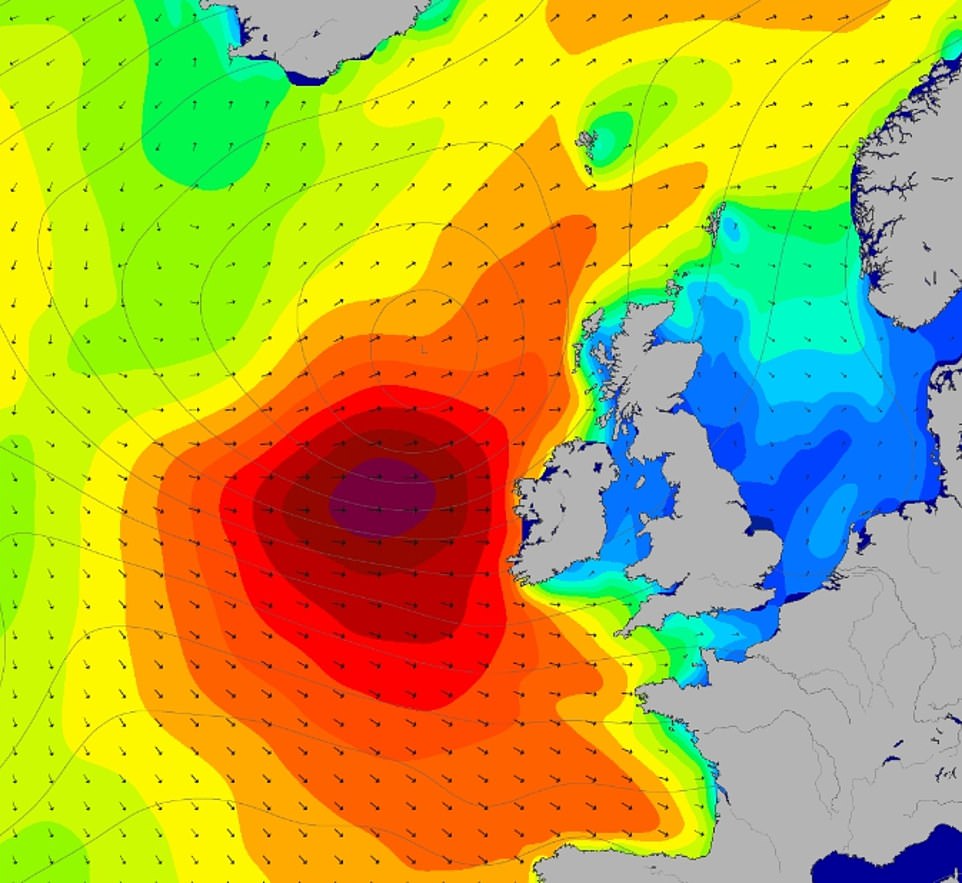 Midday Thursday: The rough conditions are set to worsen with the peak of the bad weather due later in the week 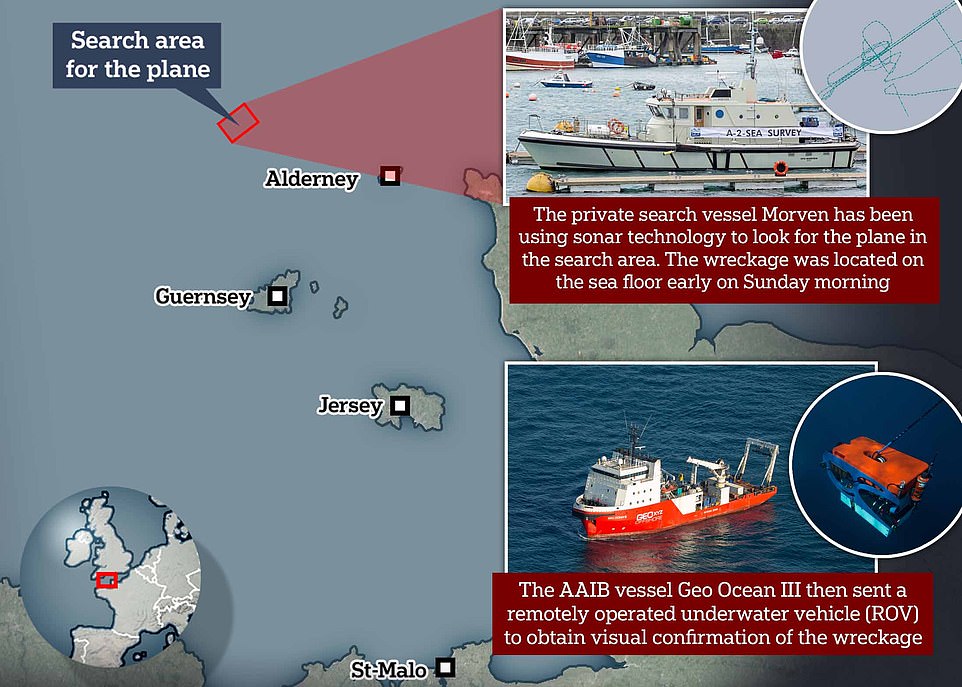 Mr Mearns said the discovery had been so quick because the team had been looking for a static object rather than in a dynamic environment searching for survivors.

‘No-one should walk away with the impression that the coastguard and also the Channel Islands air search did anything other than a professional job,’ he said. 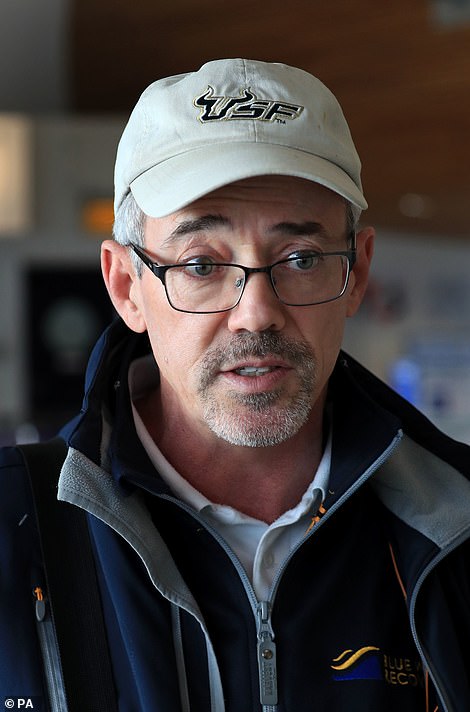 Mr Mearns, who has spearheaded around 20 historic wreck discoveries including one of Britain’s most famous battleships the HMS Hood, said with the right equipment it should be a relatively straightforward job to lift the plane.

He said it would need to be done in ‘slack water’ – the point at which the tide is turning.

The operation will be conducted by the Ministry of Defence’s Salvage and Marine Operations (S&MO) in partnership with the AAIB.

Mr Mearns said a salvage vessel equipped for working in the North Sea and a properly equipped dive support vessel would be able to lift the vessel within a matter of days.

When asked if the body would be recovered before the wreck itself, he said: ‘That’s down to the AAIB and their operational people about how they do that.

‘The body will be the most sensitive of objects that they are picking up so they will be very careful about that – they will undoubtedly have people on board who are experienced with the recovery of human remains.

‘Sadly this is not the first time this will have happened. I’m sure they will have the right professionals out there for that.’

The specialist search for the missing plane began off the coast of Guernsey on Sunday morning and located the wreckage on the seabed just hours later.

Sala and pilot Ibbotson left Nantes in France for Cardiff on January 21 –  after the star signed for the Welsh Premier League team, disappearing over the Channel. 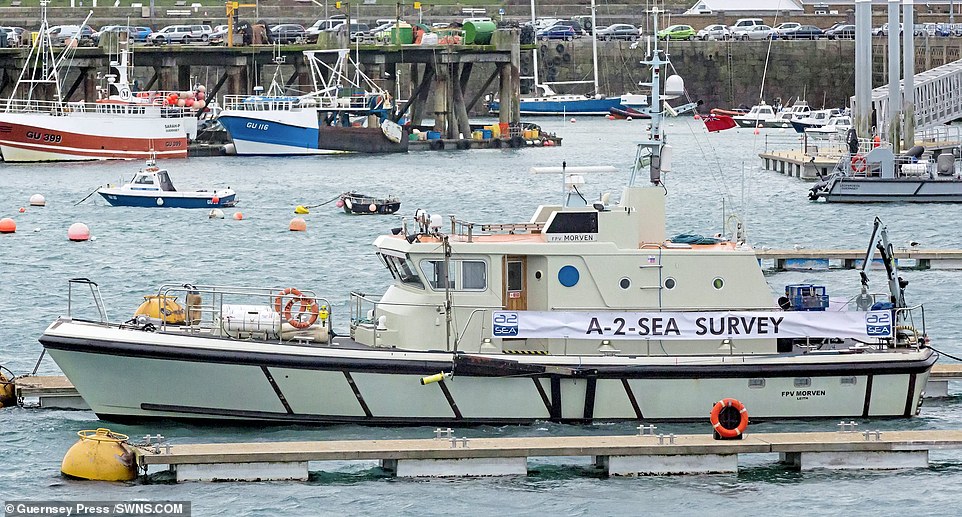 The specialist FPV Morven ship, pictured in Guernsey, was being used in a privately funded search for the plane of missing footballer Emiliano Sala and pilot David Ibbotson 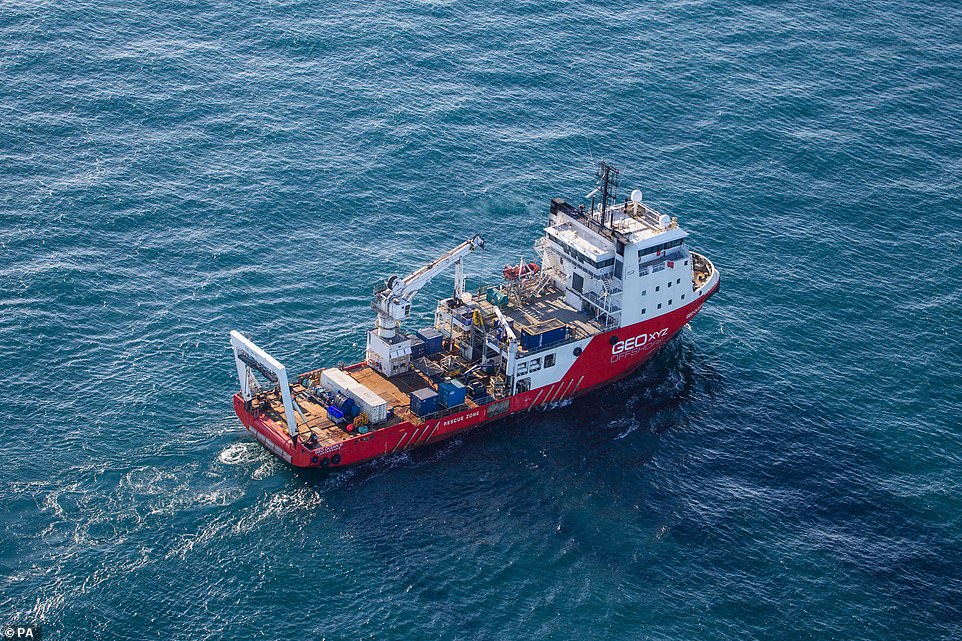 The Air Accidents Investigation Branch (AAIB) Geo Ocean III moved in to assist the Morven when it discovered wreckage. Geo sent an ROV to visually identify the wreck on the seabed

The official search was called off after four days but Sala’s friends, family and fans clubbed together to pay for a private search to continue with renowned shipwreck hunter Mr Mearns.

On Sunday morning, their efforts paid off.

The AAIB’s vessel deployed a remote-controlled submarine to examine the plane and they confirmed it was the craft carrying the striker. 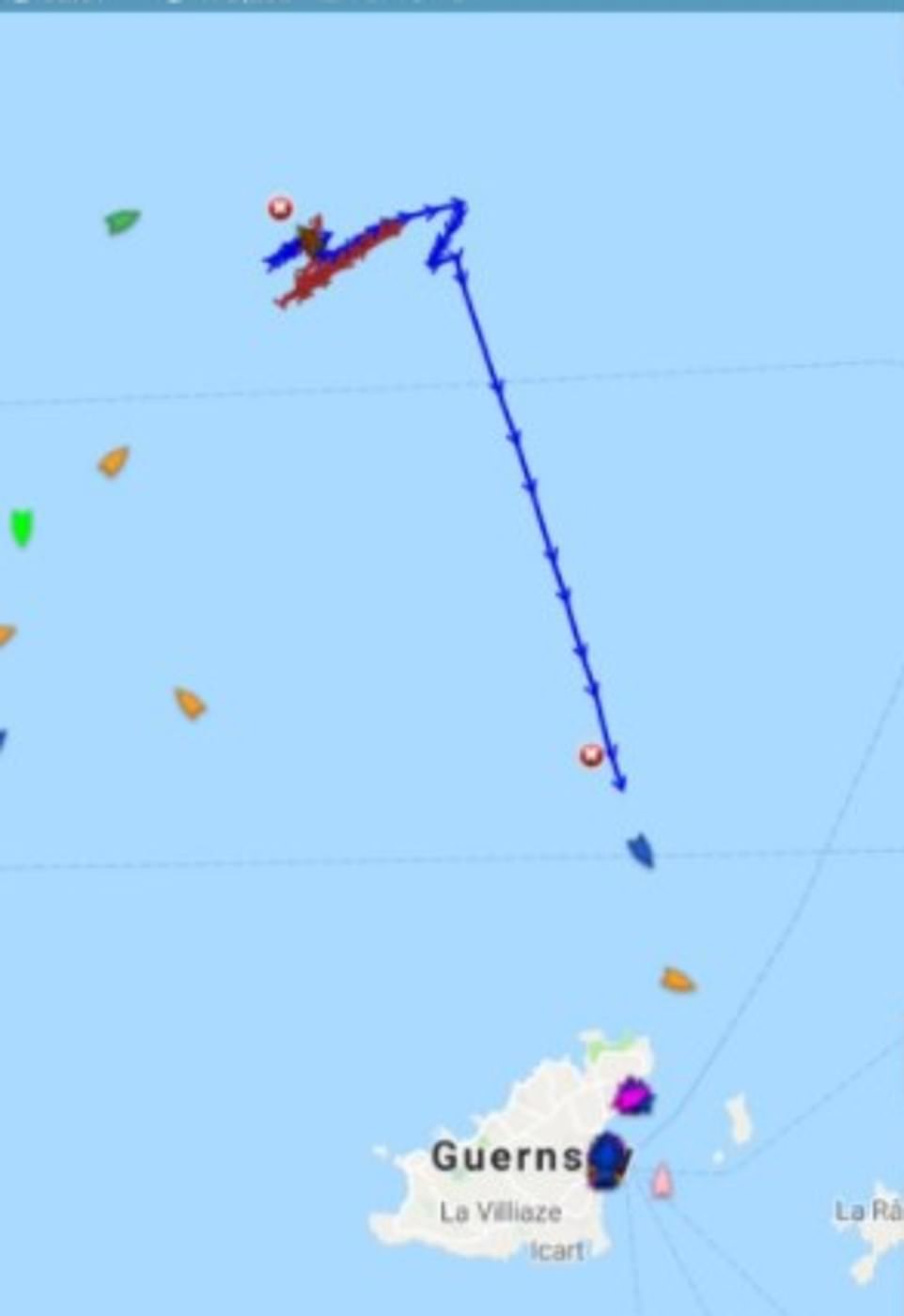 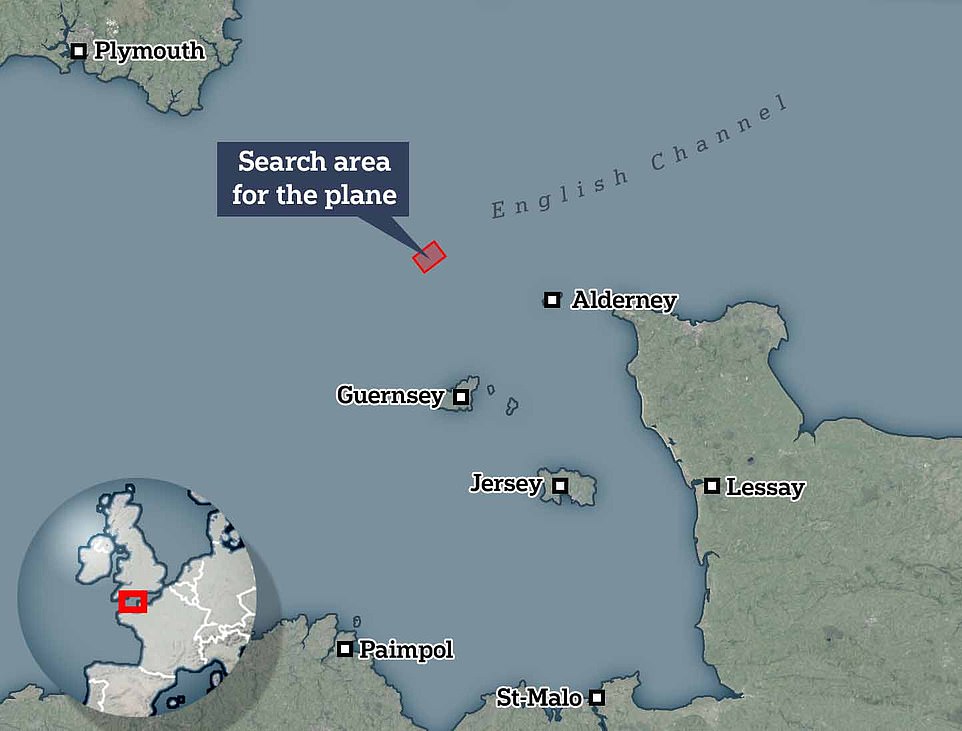 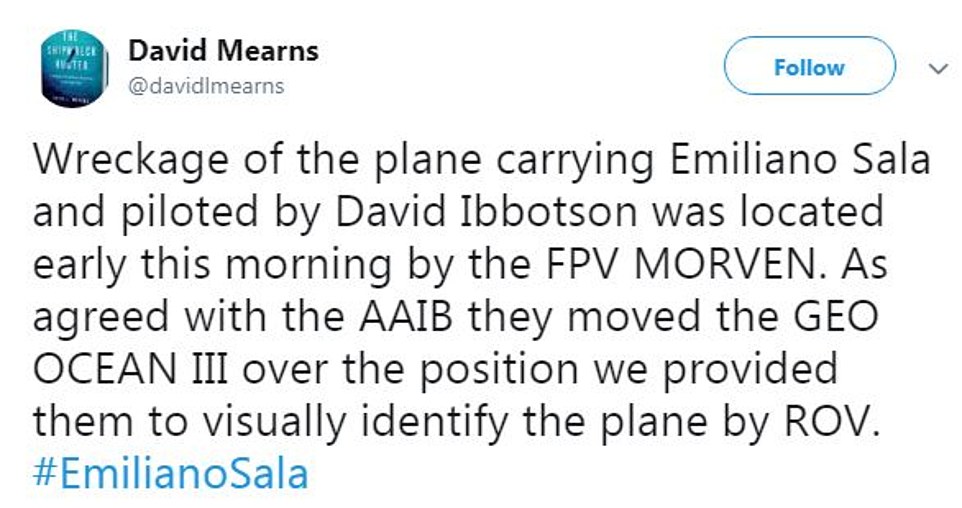 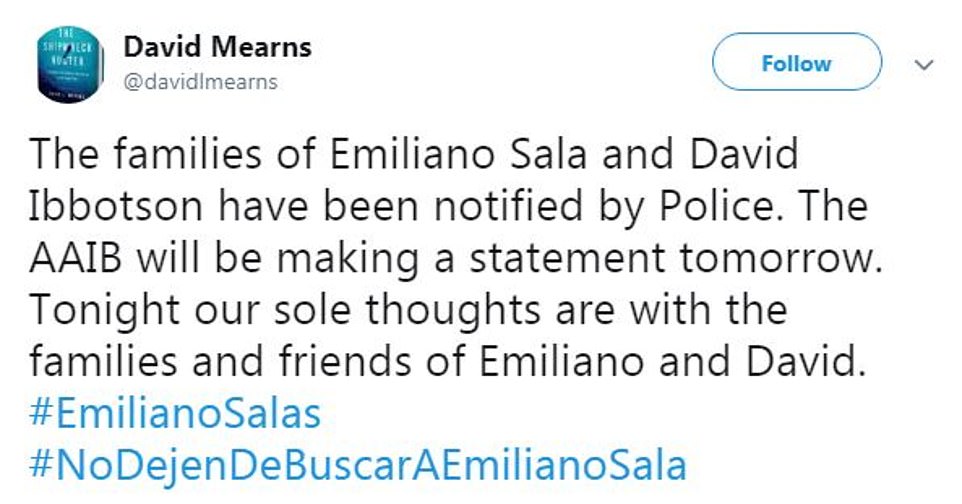 Mr Mearns told Sky News: ‘This is about the best result we could have hoped for the families’

The discovery came just two days after cushions from a plane were found on a beach near Surtainville in Normandy, France, directly east of Guernsey where the plane disappeared from radar.

A four mile square area, based on the flight path before the plane lost contact, was covered.

The official search after the plane’s disappearance was called off after three days as officials didn’t believe there was much chance of anyone having survived.

An online petition was then started which raised more than £300,000 to put on a privately-funded search using a specialist survey vessel.

More than 3,500 people had responded to the appeal for funds and the target was broken with the help of a £26,000 donation from French World Cup winner Kylian Mbappe.

The boat, operated by global marine cable installation firm A-2-Sea, is equipped with the latest technology.

It includes a multi-beam echosounder and side-scan sonar, which can detect anomalies on the seabed. 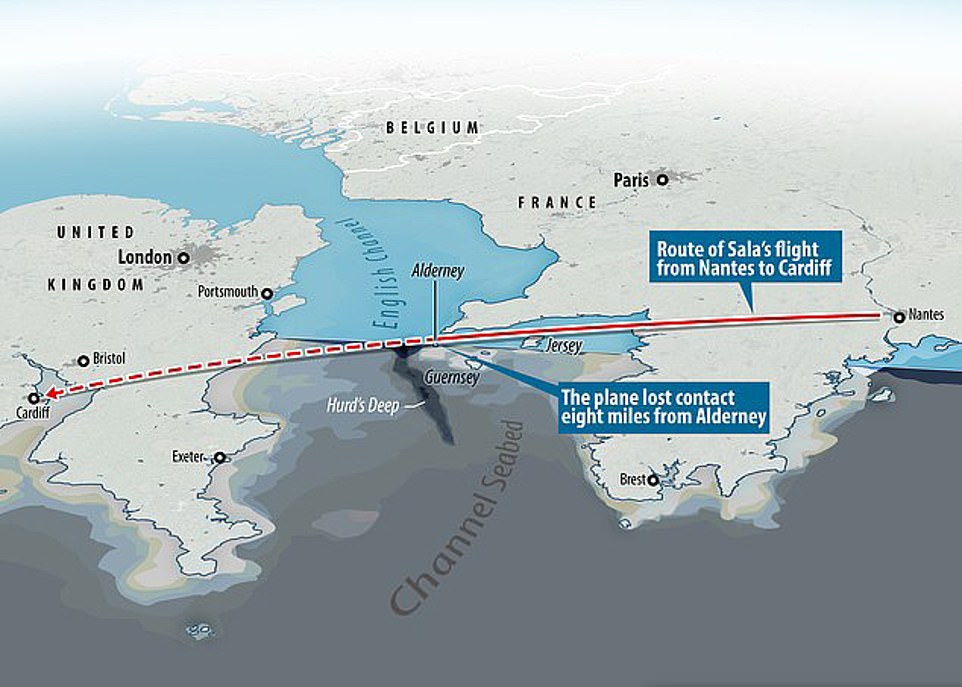 The Piper Malibu carrying Sala from Nantes to Cardiff vanished over Alderney on January 21 and is feared to have plunged into one of the Channel’s most perilous areas, known as Hurd’s Deep 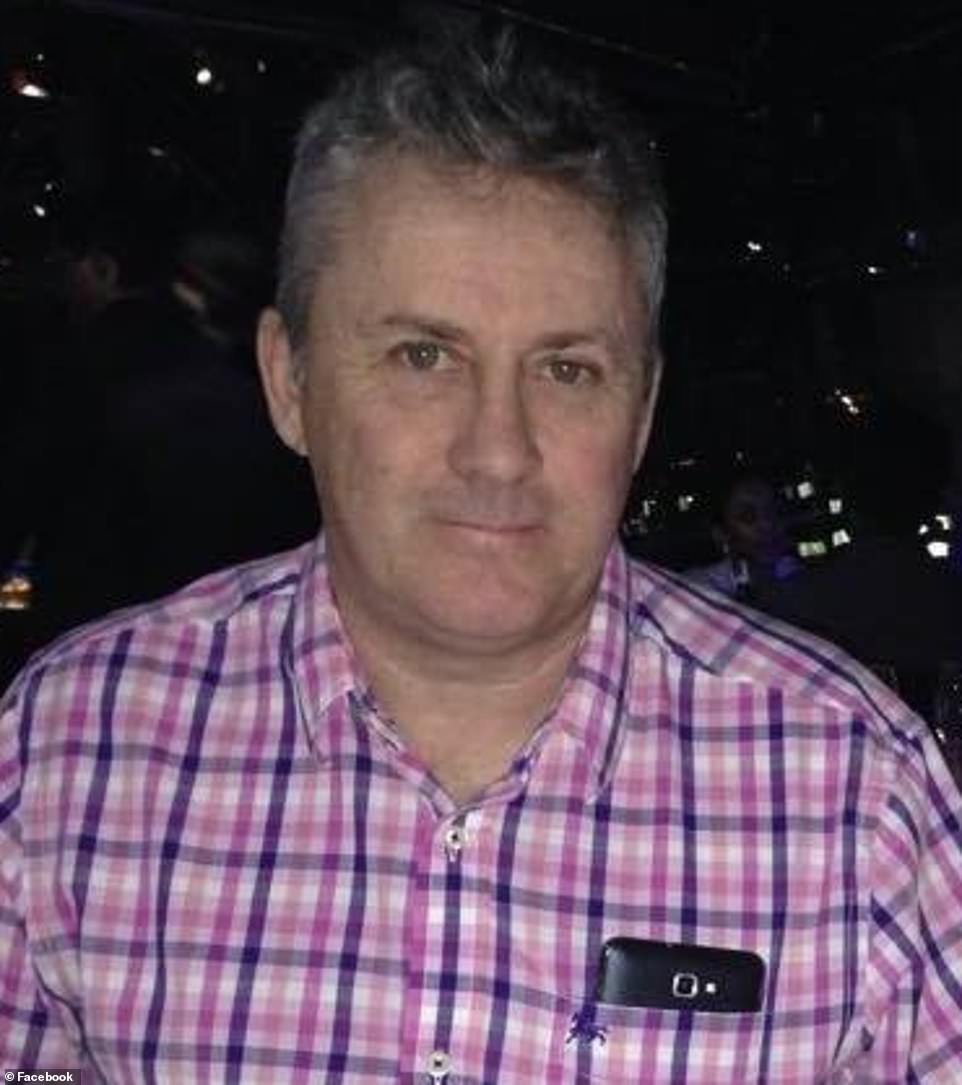 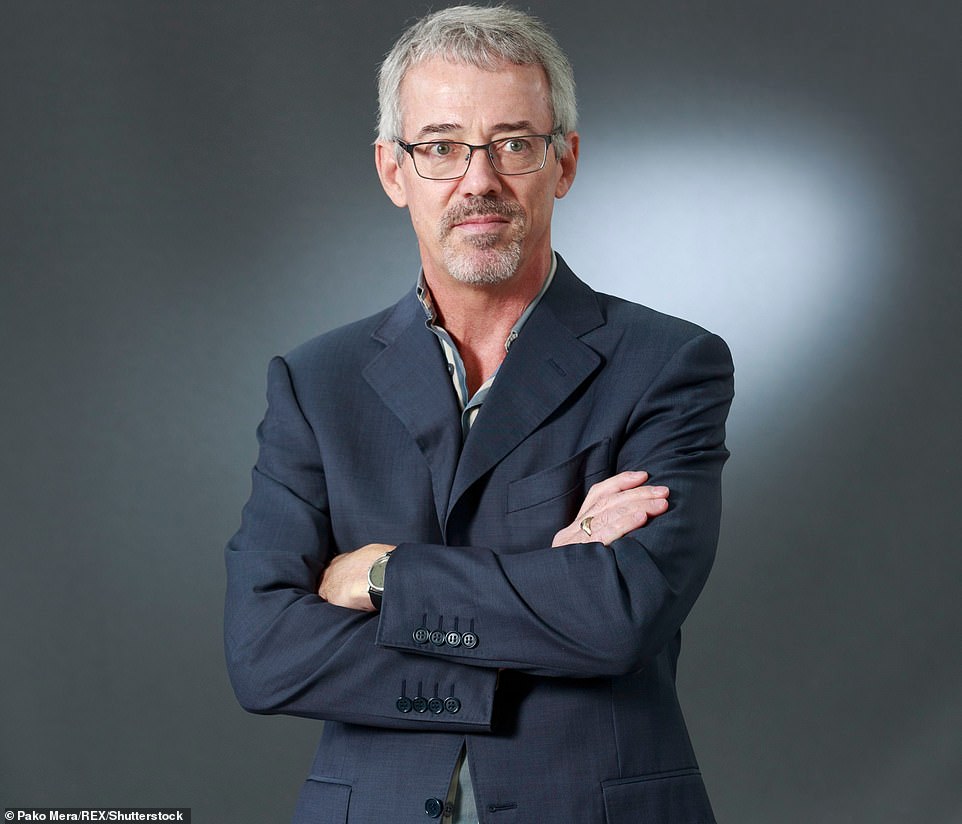 Mr Mearns claims to have found 24 major shipwrecks, led the group during the search.

He said that the boat, called Morven, was brought from Southampton to Guernsey six hours earlier than scheduled to take advantage of a break in the weather. 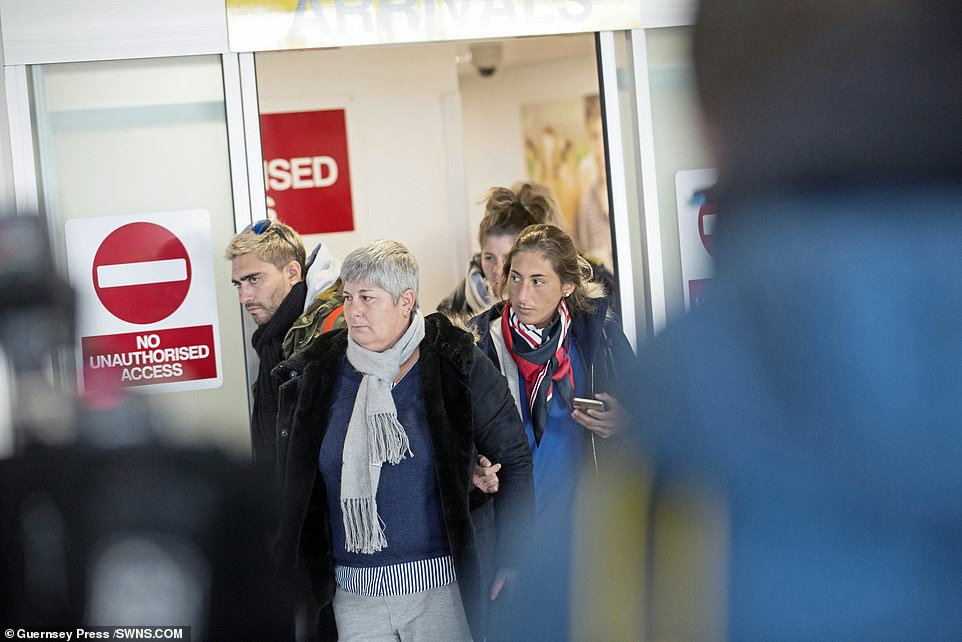