Emily Atack cut a stylish figure as she made her exit from the BBC Studio’s in London on Saturday.

The actress, 32, donned a brown printed co-ord that featured high-waisted trousers and a top with plunging neckline.

Emily layered the look with a chic leather coat that boasted a faux fur trimmed collar and matching cuffs. 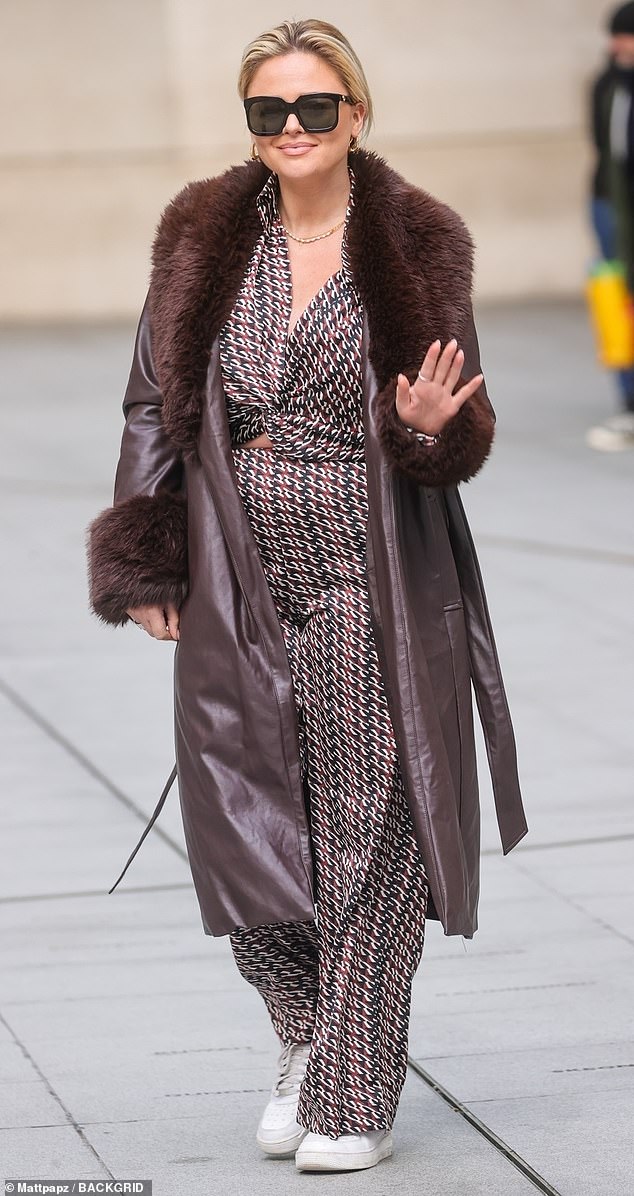 Autumnal chic: Emily Atack, 32, cut a stylish figure as she made her exit from the BBC studio’s in London on Saturday

The stunner added to her outfit with a pair of sunglasses and slipped her feet into comfy white trainers.

She accentuated her features with a hint of make-up and swept her blonde tresses into a bun.

Emily completed the look with a selection of gold jewellery including a simple necklace and earrings. 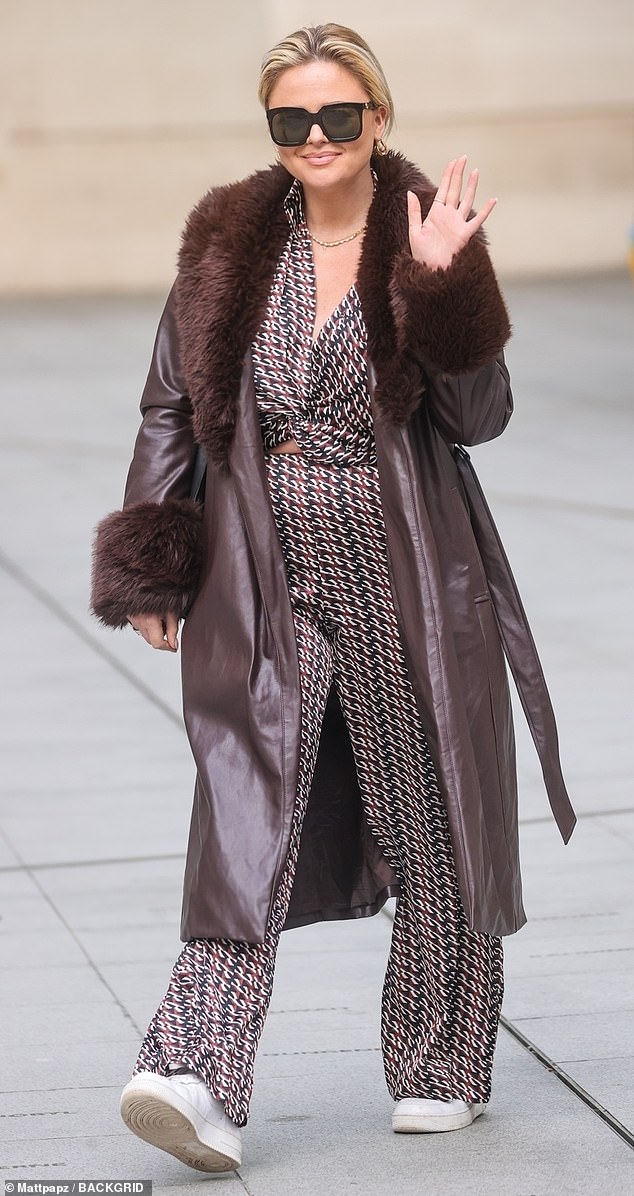 Strut: The actress donned a brown printed co-ord that featured high-waisted trousers and a top with plunging neckline

The outing comes after The One Show descended into chaos as Emily appeared alongside Mel B and Ruby Wax on Thursday.

The animated trio were interviewed by host Alex Jones on the show to promote their upcoming show Trailblazers: A Rocky Mountain Road Trip – but she soon lost control of them.

During a section of the chat about horse riding, Mel and Ruby, who recently did Celebrity Gogglebox together, ended up rolling around on the sofa and were all speaking over each other – before Mel even jokingly stormed off set. 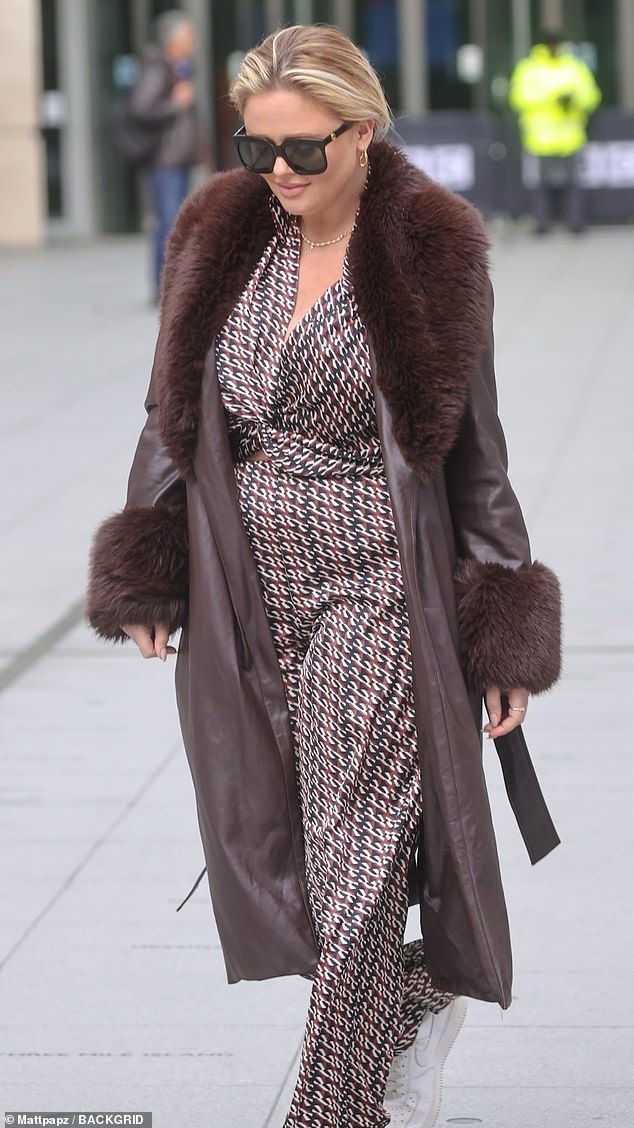 Stylish: Emily layered it with a chic leather coat that boasted a faux fur trimmed collar and matching cuffs

Alex looked on bemused as the group spoke among themselves while laughing and joking around – as co-host Ronan Keating couldn’t help but giggle.

And after the women had left the studio Alex couldn’t resist quipping: ‘Oh it feels a lot quieter in the studio now!’

Mel, 47, also jokingly stormed off the set at one point after being interrupted.

Just before Ruby, 69, could be heard telling hosts Alex and Ronan: ‘We were after the American dream and then it went rotten.’

Mel then sharply quipped back: ‘Just like this interview!.

Former X Factor judge Mel then said ‘don’t forget to tune in guys on Monday’ before cheekily attempting to storm off set.

Her co-stars then brought her back to her seat as Mel could be heard saying: ‘She said we had to go.’ 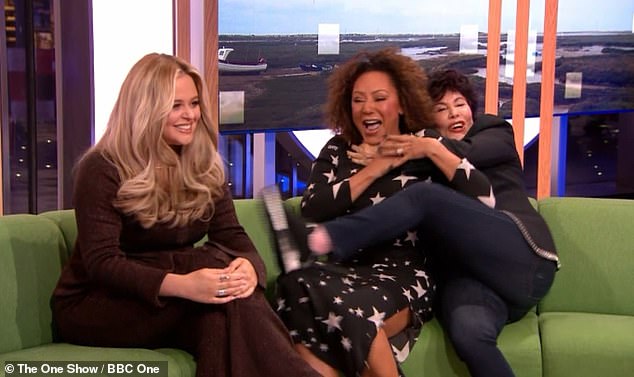 LOL: Emily’s outing comes after he One Show descended into chaos as she joined Emily Mel B and Ruby Wax on Thursday