The London-born actress is playing the iconic English nanny in an upcoming Disney film, but she’s admitted to being nervous about how her children – Hazel, four, and 21-month-old Violet – will react when they watch her performance.

Emily – who is married to American actor John Krasinski – shared: ‘Hazel loves Julie [Andrews] so much that I worry she’s just gonna reject my version of Mary Poppins. 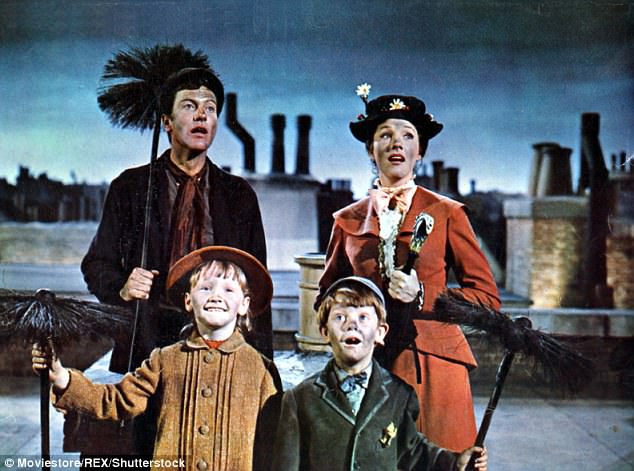 Frightened: The actress, seen here earlier this month, said she is scared of heights

‘I think it’s strange for the kids of actors to see their parents in stuff… I think it’s weird for Hazel ’cause she’s also young – they’re really young, my kids, and so it’s disconcerting for them to see you as someone else behaving in a way that’s not natural.’

The duo both previously starred alongside each other in 2006’s ‘The Devil Wears Prada’, and Emily has joked that the acclaimed actress is now stalking her.

Teasing Meryl’s role in the new film, Emily told Entertainment Tonight: ‘We have really set a tone that we never play characters that like each other very much. And so we are continuing with that tradition in this.

‘I don’t know if we could ever play like best pals in something. It’s just not what works for Meryl and I.’

‘The Devil Wears Prada’ remains one of the highlights of Emily’s career.

But the 35-year-old beauty has revealed she’s never really spoken about the film – which also features Anne Hathaway – with her co-stars, even though fans have been calling for a sequel for more than a decade.