In a parallel universe, without the coronavirus, today would be the first day of Glastonbury, the biggest arts festival in the world.

However, instead of welcoming over 200,000 people to the the 900-acre site beside her Somerset farm, Emily Eavis who co-runs the festival along with the founder, her father Michael, has only empty fields to gaze over, with the lone, permanent structure of the Pyramid Stage at the bottom of the hill as a reminder of what usually happens.

Cancelling the festival, that would have been celebrating its 50th anniversary, has cost millions of pounds but Ms Eavis is nevertheless upbeat about the future.

Emily Eavis (right) along with her father, the founder of Glastonbury Michael Eavis, (left)

‘We paid everyone up to the point they stopped working and some we furloughed. Luckily we were able to do that. And we did some charity merch T-shirts, which I think will get around a hundred grand each for Water Aid, Greenpeace and Oxfam.

Ms Eavis lamented the loss of income to the hundreds of individuals and businesses usually employed by the festival.

‘Yeah, it’s been tough. In financial terms, it’s cost us millions. I mean, we were so far down the road when we got cancelled. By March, you’ve got a whole festival that’s ready, it’s baked,’ she told The Times.

The family is now focused on next year instead and Ms Eavis says they intend it to happen. 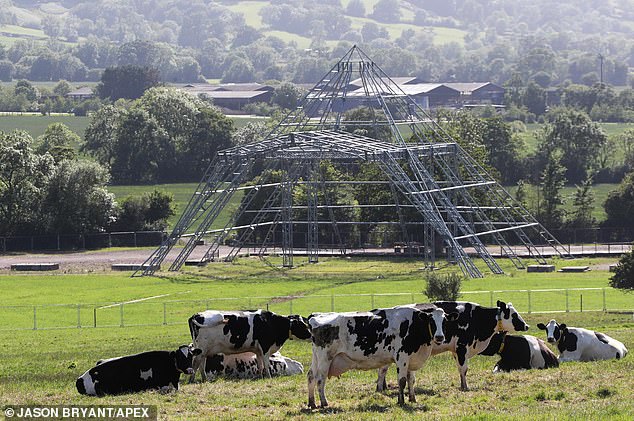 Wednesday should have seen the gates to Glastonbury Festival thrown open for the 50th anniversary event. The lone, permanent structure of the Pyramid Stage (pictured) at the bottom of the hill serves as a reminder of what usually happens

‘I think when we open the gates next year it’s going to be really emotional, even if it’s pouring with rain. Good times are what we so deeply need right now, aren’t they?’

It was on March 18 it became apparent that the pandemic was unstoppable and Glastonbury 2020 was cancelled.

According to Ms Eavis, a mother-of-three, Glastonbury was given no specific advice in the lead-up to its cancellation.

Every day following the daily news briefings, she spoke to her husband Nick, the festival’s head of music programming, as to the odds that the festival would go ahead. 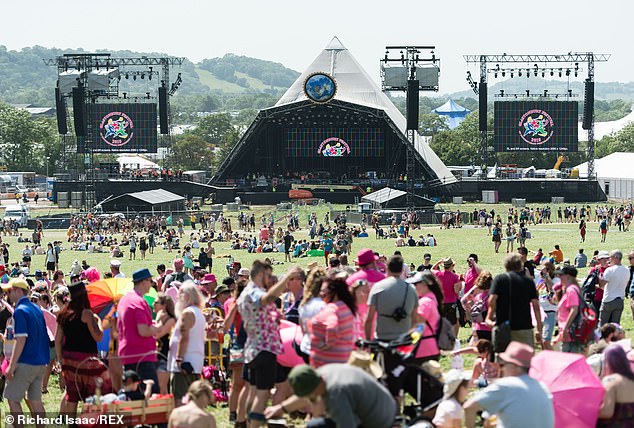 Glastonbury last year pictured:  Glastonbury 2020 was due to host headline sets from Kendrick Lamar, Taylor Swift and Sir Paul McCartney and would have been broadcast across the weekend by the BBC

By the time the lockdown was announced she said they had come to the conclusion it would have to be cancelled and they made the calls the next day.

Glastonbury 2020 was due to host headline sets from Kendrick Lamar, Taylor Swift and Sir Paul McCartney and would have been broadcast across the weekend by the BBC.

The day after the cancellation was announced, the Eavis family distributed their stockpiled hand sanitiser, PPE and masks, to hospitals. Bags from merchandise stalls were also given away for medics to keep their scrubs separate from their normal clothes.

On a normal year the site next to Emily Eavis’ home of Worthy Farm would feature circus tents, a giant fire-breathing spider, along with the Kidz Field, seaside pier and stone circle. 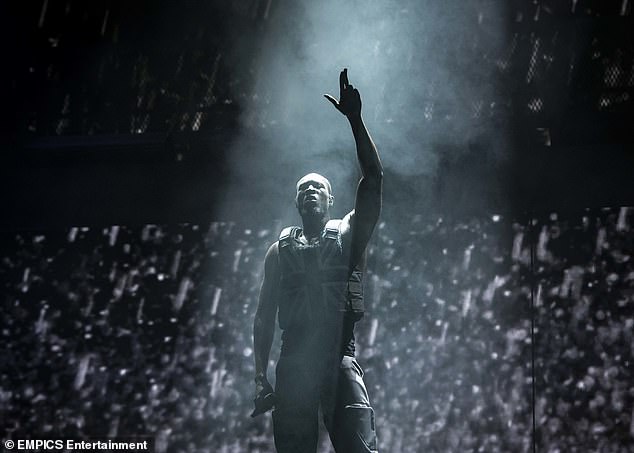 Ms Eavis would be picking up people from the gates, if it was their first time at the festival and they were carrying lots of things.

In hot temperatures experienced this week, the team would also be spraying festival-goers and offering suncream and hats.

Last year Glastonbury, with the most gender-balanced-line-up of any festival, reached a milestone when Stormzy became the first black solo British headliner. It also became entirely free of single-use plastic, installing over 800 water points.

The tents left behind at the festival were donated to refugee camps.

Closer to home, Glastonbury has built 50 affordable houses in the local area with a vast proportion of its profits going to Water Aid, Oxfam and Greenpeace.

Despite the festival being cancelled, Emily Eavis told the Times that she is still up at the crack of dawn and in festival mode.

Wildlife on Worthy farm is thriving: ‘Nature’s having an amazing party here.’ But no one else,’ Ms Eavis said. 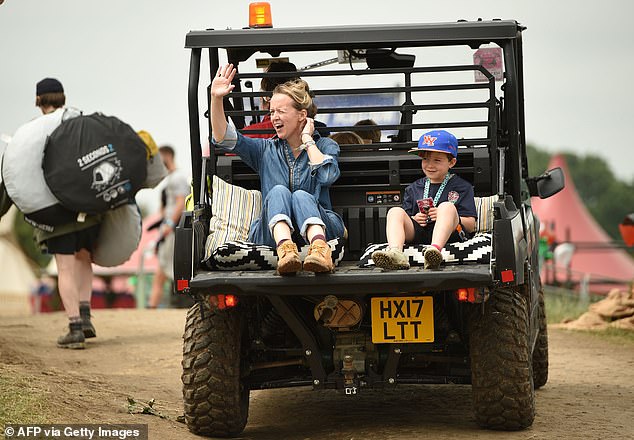 Festival co-organiser Emily Eavis waves from the rear of a vehicle at the Glastonbury Festival of Music and Performing Arts on Worthy Farm near the village of Pilton in Somerset, South West England, on June 26, 2019

The 40-year-old was named a Godlike Genius by NME this year, 24 years after her father, Michael.

Over the weekend, the BBC will broadcast highlights from previous festivals and  multiple events will be screened on digital channels.

Ms Eavis has received pictures from people who are pitching tents in their gardens to watch the festival, with some resorting to build their own stages.

‘People on social media were, at first, heartbroken,’ she admits. ‘And all I could say to them was, ‘Well, we’ll get through it. Every year has its own story and narrative and that’s obviously the narrative of this year.’