Emily Maitlis returns to BBC Newsnight screens with no mention of the Dominic Cummings ‘biased monologue’ row that generated more than 40,000 complaints

Emily Maitlis returned to Newsnight for the first time since the controversy over her comments on Boris Johnson’s top aide Dominic Cummings.

The presenter was found to have violated the BBC’s impartiality guidelines following her monologue on Dominic Cummings last week.

In her introduction to Tuesday’s show, Maitlis said Mr Cummings had ‘broken the rules’ when he travelled from London to Durham during lockdown and ‘the country can see that, and it’s shocked the Government cannot’.

Emily Maitlis on last night’s Newsnight. She had been off air since her monologue last Tuesday

She said he made the public feel ‘like fools’ and accused Boris Johnson of showing ‘blind loyalty’ towards his adviser, who had driven 260 miles from London to County Durham during lockdown.

Within 24 hours, the BBC released a statement saying the programme had not met ‘standards of due impartiality’, adding that staff had been ‘reminded of the guidelines’.

The BBC said the monologue ‘did not meet our standards of due impartiality’.

Maitlis returned to Newsnight on last night, but did not mention the row during a show focusing on the protests that have broken out across the US in response to the death of an unarmed black man. 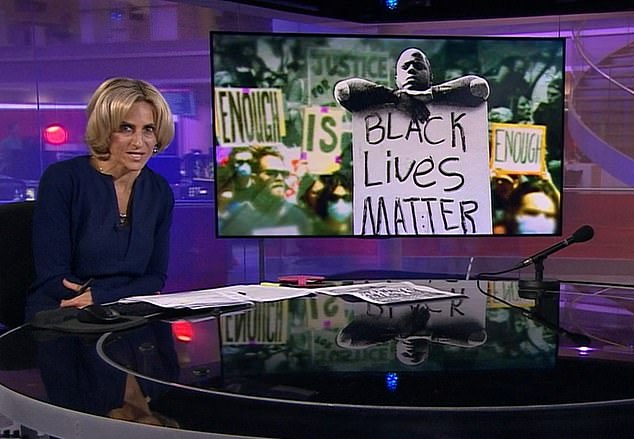 George Floyd died after a white Minneapolis police officer held his knee on his neck for several minutes.

Roger Mosey said ‘traditional restraint has been swept away in the age of social media’, with presenters encouraged to show their personalities to audiences.

Writing for the New Statesman Mr Mosey said: ‘Much of the blame sits with the BBC management, who have been woolly and contradictory in their determination of what impartiality is in a modern broadcasting environment.’

Following the controversy over Mr Cummings, Ms Maitlis did not appear as scheduled on Wednesday’s episode of Newsnight, saying she asked for the evening off. She had not been scheduled to appear for the remainder of last week.

The presenter, widely lauded for her interview with the Duke of York last year, said she has been ‘overwhelmed’ by support from viewers after her monologue on Mr Cummings.

The 49-year-old broadcaster tweeted: ‘Been overwhelmed by all the kindness, messages – and support on here – and I’ve probably missed much of it.

‘A big thank you from us all at Newsnight.’