The 49-year-old host stated as fact that the Prime Minister’s adviser ‘broke the rules’ by taking a 260-mile trip from London to County Durham with his family in March.

The issue over whether he broke any coronavirus lockdown restrictions has been the subject of fierce debate in recent days, with Mr Cummings denying any wrongdoing.

But Matlis said on last night’s programme on BBC Two: ‘Dominic Cummings broke the rules, the country can see that, and it’s shocked the Government cannot.

‘The longer ministers and the Prime Minister tell us he worked with them, the more angry the response to this scandal is likely to be.

‘He was the man, remember, who always got the public mood, he tagged the lazy label of ‘elite’ on those who disagreed. He should understand that public mood now.

‘One of fury, contempt and anguish. He made those who struggled to keep to the rules feel like fools, and has allowed many more to assume they can now flout them.

‘The Prime Minister knows all this, but despite the resignation of one minister, growing unease from his backbenchers, a dramatic early warning from the polls, and a deep national disquiet, Boris Johnson has chosen to ignore it.’

Here are the varying opinions on how many breaches of lockdown rules Mr Cummings committed – if any:

None: Mr Cummings said he, his wife Mary Wakefield, and their son travelled by car from London to County Durham on the night of March 27 to be near his relatives. He said with Ms Wakefield having fallen ill, and with Downing Street reporting coronavirus cases, this was the best option to secure childcare should both he and Ms Wakefield become unwell. Mr Cummings indeed reported waking up ill the next morning, and was soon said by Downing Street to have coronavirus symptoms. Because of the childcare issue, Mr Cummings insisted his move was reasonable under the ‘exceptional circumstances’ clause of the lockdown guidelines. He said the 270-mile trip was completed without a stop.

One: However, many experts said the trip was still a definite breach. Professor Jackie Cassell, deputy dean of the Brighton and Sussex Medical School, said the rules were clear: people should not leave major cities to go to second homes in rural areas. Aside from potentially spreading coronavirus, it would place an extra burden on small local hospitals if admission was needed.

Two: Some reports said that after the Cummings family’s return to London on April 13, Mr Cummings made a second visit to Durham. The Observer and the Sunday Mirror quoted an unidentified witness as saying they saw Mr Cummings walking through Houghall Woods, near his parents’ property in Durham, and commenting: ‘Aren’t the bluebells lovely?’ Mr Cummings on Monday denied this second trip, and insists photos and data on his phone disprove the reports. In any event, Downing Street regularly refused to confirm where Mr Cummings was self-isolating after news broke that he was ill.

‘Tonight we consider what this blind loyalty tells us about the workings of Number 10.’

But her comments attracted a huge backlash on social media, with one viewer tweeting: ‘BBC bare-faced bias’.

Another wrote: ‘What a totally disgraceful speech from Emily Maitlis and the BBC Newsnight editorial team.

‘Ofcom need to step in because the BBC are clearly breaking their own charter. This in nasty and not at all unbiased or impartial. The licence fee should be revoked, Boris Johnson.’

And a third said: ‘This is atrocious. This is a presenter’s opinion and using her position to give her viewpoint. We deserve as taxpayers to have impartial broadcasters.’

Mr Cummings has been under fire since details of a 260-mile trip from London to the North East of England he made with his family emerged, with a string of Conservative MPs calling for his sacking.

Last night, the scale of the Tory revolt over the row became clear as almost 40 of the party’s MPs called for him to resign, a minister quit and some warned of a ‘Black Wednesday’ crisis.

Amid growing anger from all wings of the party, Scotland Office minister Douglas Ross said he was quitting over the issue.

He said he could not defend Mr Cummings’s actions to constituents who had followed the ‘stay at home’ advice and denied themselves the chance to visit sick relatives.

Mr Ross joined a list of at least 39 Tory MPs who by last night, had called for Mr Johnson’s most senior aide to leave Downing Street.

The list includes four members of the executive of the backbench 1922 committee and 15 former ministers.

Many of the MPs calling for Mr Cummings’s departure told how they had received more than a thousand messages from constituents over the aide’s failure to abide by the lockdown, with warnings that party members were among the angriest. 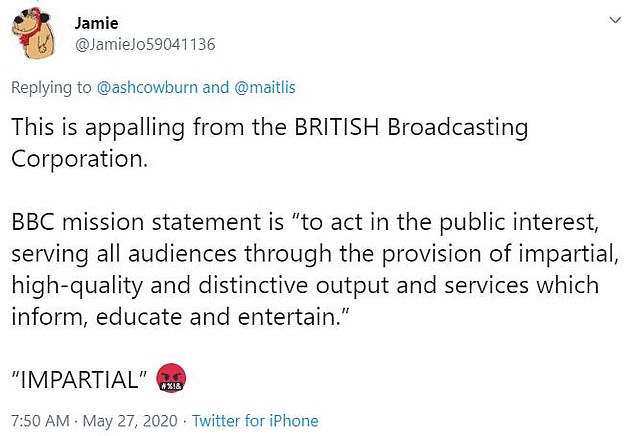 One senior backbencher said: ‘This is not the usual suspects, it is our grassroots, our own members. If we don’t stop this now, it will be our Black Wednesday.’

Downing Street had hoped that Mr Cummings’s press conference on Monday would take the heat out of the row, but calls for him to go continued to grow as the public remained unconvinced by his explanation of his actions and refusal to apologise.

The Prime Minister’s hopes that he had drawn a line under the crisis were shattered when Mr Ross became the first minister to quit over the row at about 9am yesterday.

The under-secretary of state for Scotland said he could not ‘in good faith’ tell his constituents who could not say goodbye to loved ones while obeying lockdown rules that Mr Cummings had acted appropriately.

A BBC spokesman has been contacted for comment by MailOnline today.

Section 4.1 of the BBC’s editorial guidelines states: ‘The BBC is committed to achieving due impartiality in all its output. This commitment is fundamental to our reputation, our values and the trust of audiences.

‘The term ‘due’ means that the impartiality must be adequate and appropriate to the output, taking account of the subject and nature of the content, the likely audience expectation and any signposting that may influence that expectation.’