The 30-year-old model continued to tease her followers as she donned a leopard thong bikini and covered her ample bust with one hand.

Earlier in the day she had paid tribute to her husband Sebastian Bear McClard on his first Father’s Day as she said: ‘I’m grateful for you every day,’ while sharing many at-home snaps.

Busty display: Emily Ratajkowski, 30, continued to tease her followers as she shared a topless snap from her racy new Inamorata swim campaign

Emily continued to build anticipation for her new leopard floral swim ahead of its June 22 release with the snap.

She kneeled seductively with one hand on her leg and another protecting her modesty, donning nothing but a thong and custom gloves in the same fabric.

The California native continued to show off glamorous soft waves and pursed her signature pout in the image.

Other snaps previously posted included a close up shot of her glammed up face and a hint of her cleavage, and in another she led with full sex appeal as she showed off her clutched breasts. 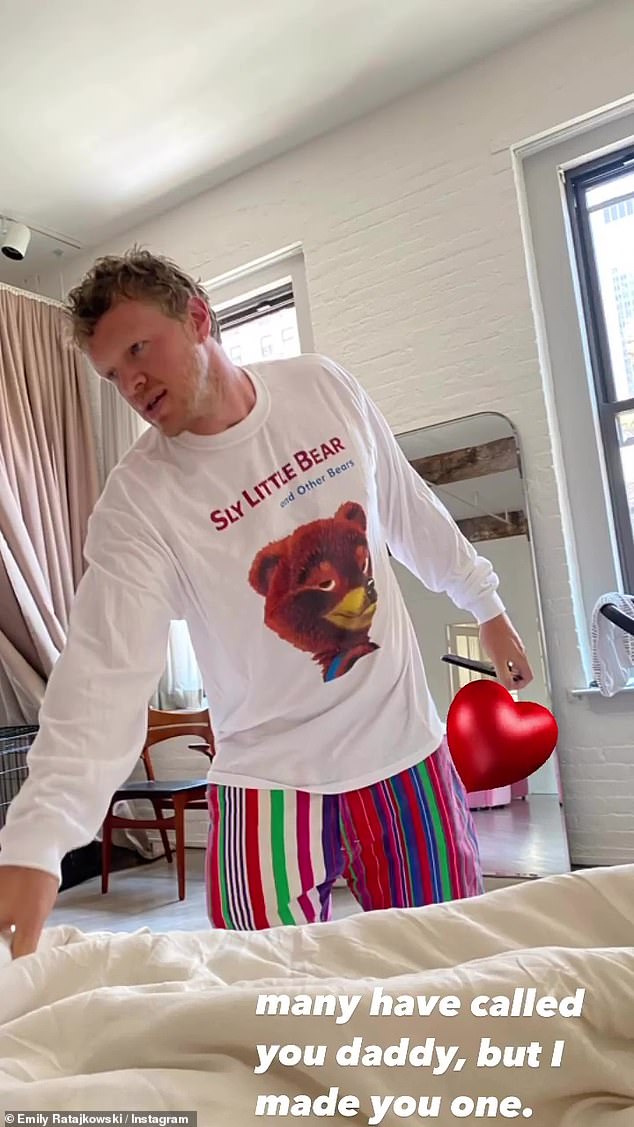 Racy caption: ‘Many have called you daddy, but I made you one,’ she shared as she posted a bed-side snap 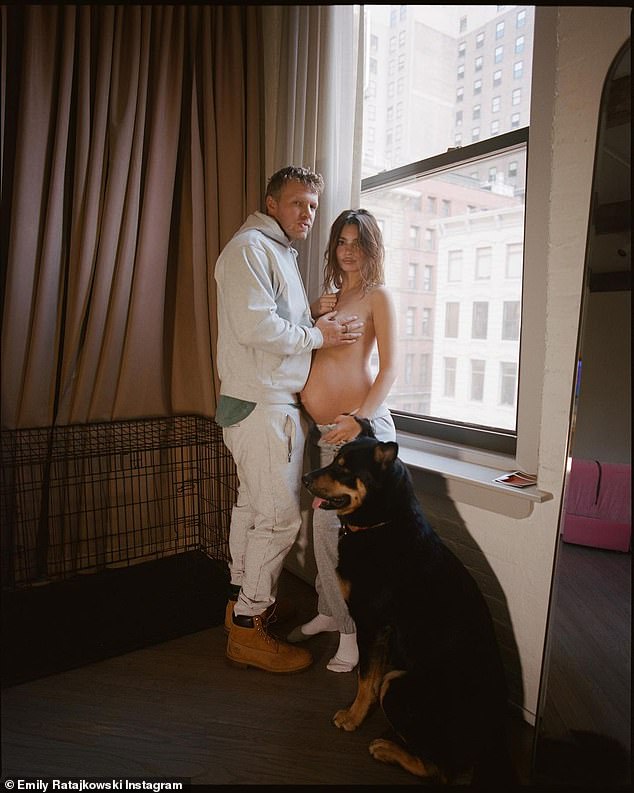 Bouncing back: Despite only welcoming son Sylvester in late March, Emily continues to flaunt her impossibly flat stomach 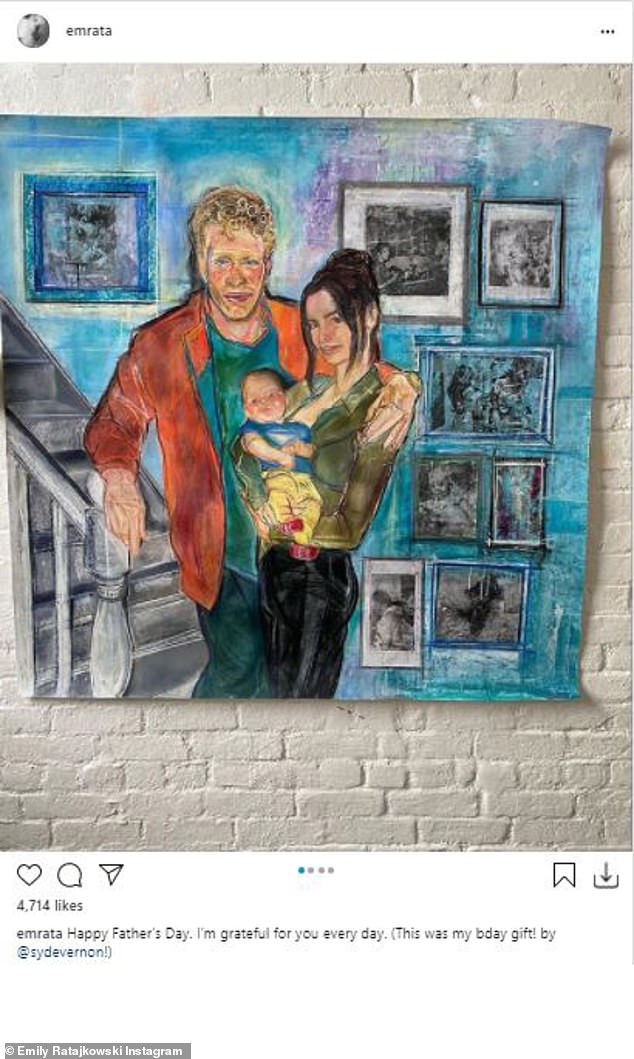 Little family: On his first Father’s Day Emily paid tribute to Sebastian as she shared images including a family portrait

In all of the very body-centric shots her impossibly flat stomach was on full display, and she continued to look a far cry away from someone who had just welcomed their first child in March.

On Sunday she celebrated her husband of three years on his first Father’s Day after they welcomed son Sylvester in late March.

She debuted a portrait of their family on social media and shared one cheeky snap of him by their bed as she teased: ‘Many have called you daddy but I made you one.’

Earlier this month, Emily was slammed on social media for a series of bikini-clad images in which she held the newborn with one hand, prompting a furry of comments about the lack of support along with accusations she was using him as a mere ‘accessory.’ 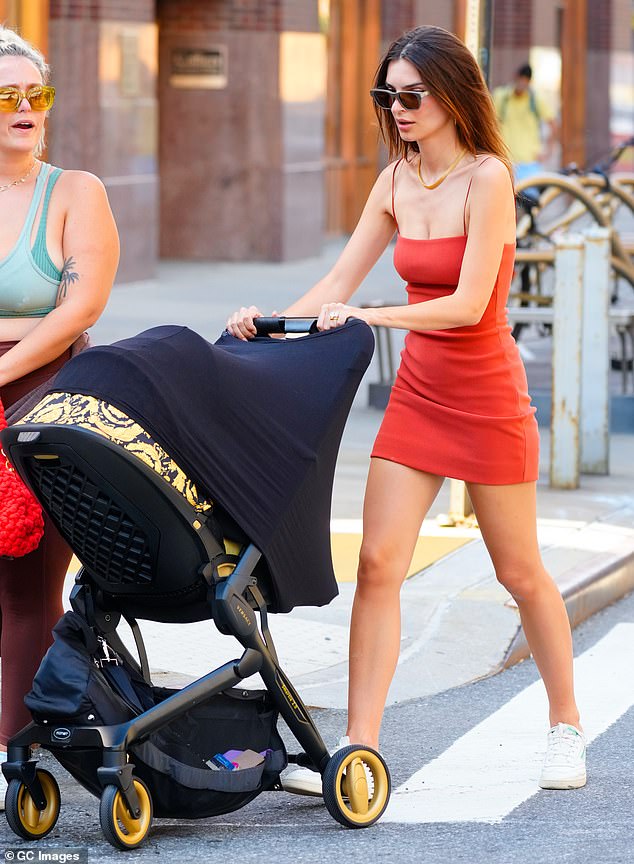 Mom life: The model found herself in hot water after she shared a photo of herself holding her newborn Sylvester without any neck support, prompting people to say she was using her son as an ‘accessory’

None! One user commented ‘NO neck support’ as the images of her with the infant went viral for all the wrong reasons

Accessory: Followers asserted that the beings were no more than ‘accessories’ for her

‘NO neck support lmfaooo wtf,’ wrote one follower on Twitter, after the images of her with Sylvester went viral for all the wrong reasons.

‘Cus its just a prop for her photo and she doesn’t want anything hiding her body…kinda weird if u think too much into,’ wrote another.

And another user posted a side by side shot of the model previously mishandling a small dog with the same one hand grasp as its legs and body dangled aimlessly, prompting even more comments.

Many people asserted that both helpless beings were no more than ‘accessories,’ with one user saying that the dog had ‘no butt support.’

All eyes on her: Other snaps previously posted included a close up shot of her glammed up face and a hint of her cleavage 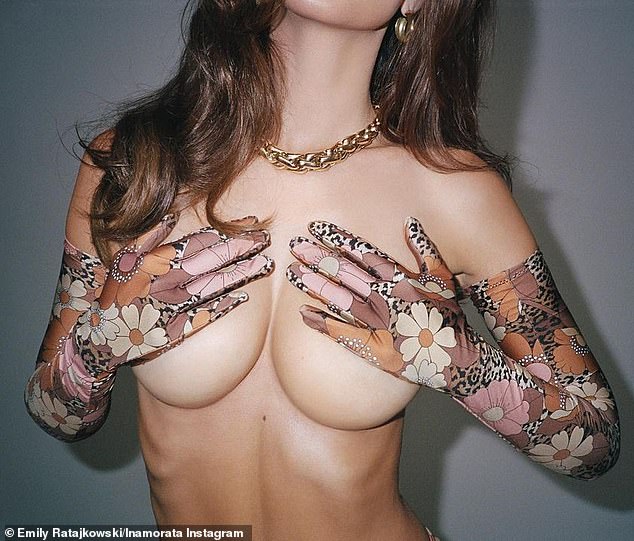 Attention please! The I Feel Pretty star also showcased the floral gloves by flaunting her ample assets in a photo posted on the Inamorata Instagram page on Friday