And Emily Ratajkowski, 29, shared a snap of her feeding her newborn son Sylvester at her bosom as she joked she was ‘always breastfeeding.’

The model had maintained that her child would choose his or her own gender when they turned 18, so opted for the non-binary nickname ‘Sly.’ 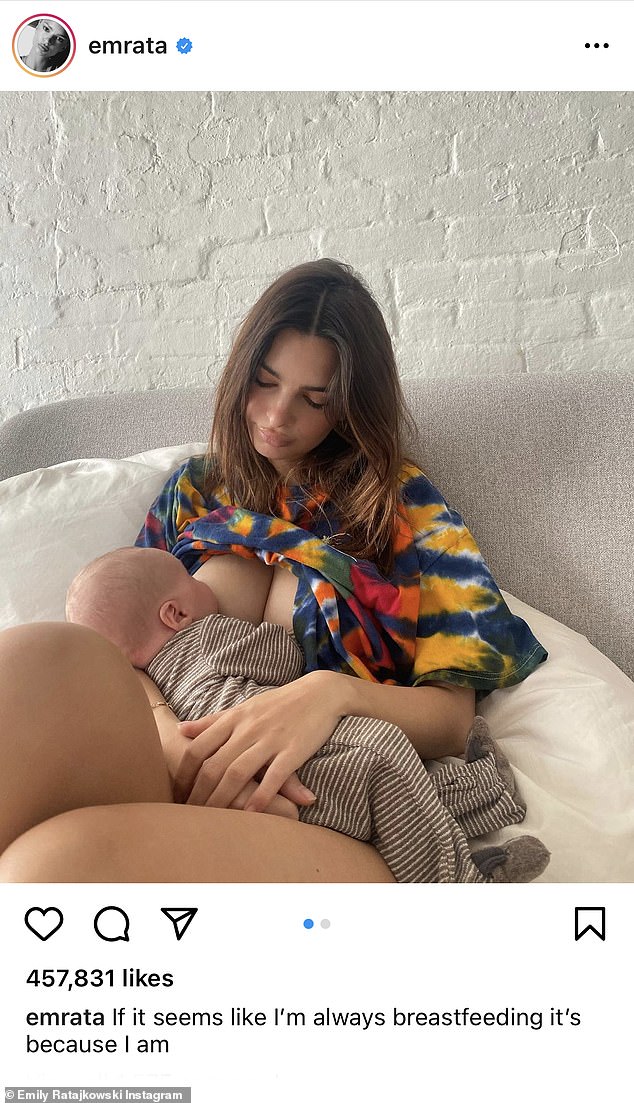 In the at-home snaps Emily shared a glimpse into her life as a first-time mom, revealing ‘If it seems like I’m always breastfeeding it’s because I am.’

She lovingly looked down at the child she shares with husband of three years Sebastian Bear-McClard while wearing a tie-dye shirt.

In a second snap she continued to leave her son at peace on her bosom as she softly smiled at the camera.

And it seems that despite the adjustments that come with having an infant, she is settling into motherhood nicely. 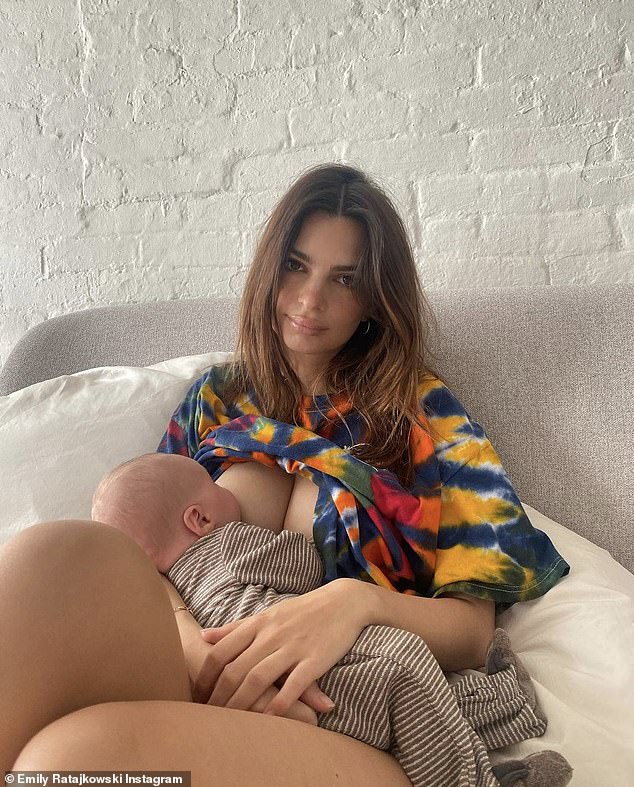 Mommy duties: She lovingly looked down at the child she shares with husband of three years Sebastian Bear-McClard while wearing a tie-dye shirt

Less than two months after giving birth she revealed her famed figure had virtually snapped back to its original form as she posed in an Inamorata bikini.

Though breastfeeding does burn a lot of calories, her snatched postpartum frame continues to be nothing short of an anomaly.

Her sizzling bikini post garnered comments from followers that were floored at her body’s seemingly rapid transformation for better and worse. 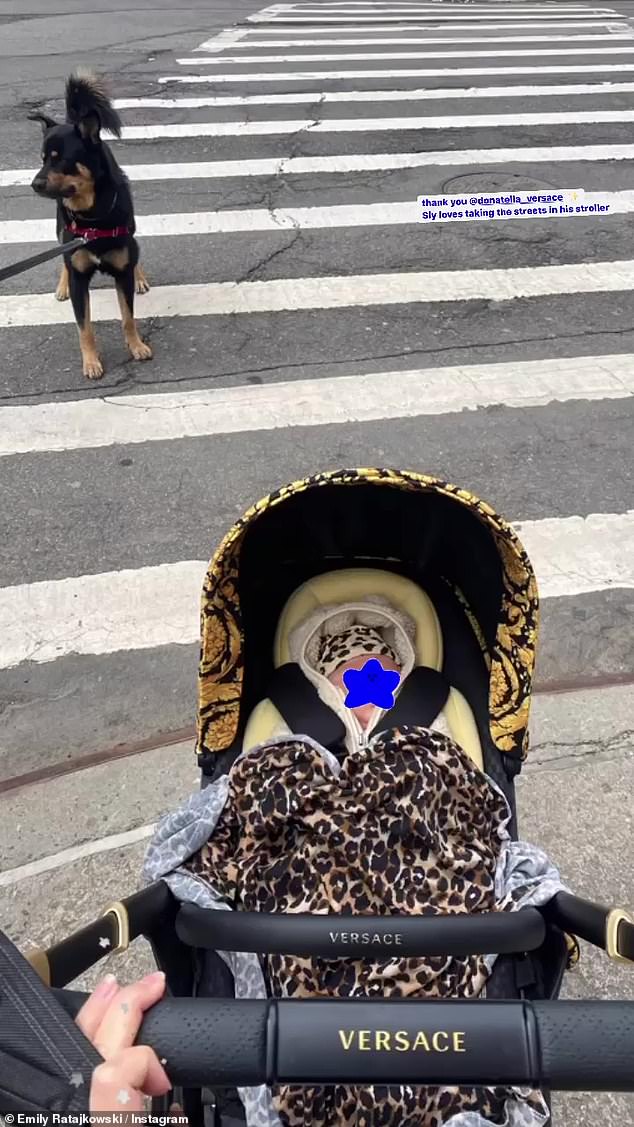 Fancy: Later in the day, Emily took to Instagram to show off her baby’s leopard print Versace stroller

Blogger Chiara Ferragni wrote: ‘Girl how can you have that body after the baby?’

And other famous friends were seemingly at a loss for words as SZA wrote ‘WOAH’  and Chantel Jeffries commented ‘Wow.’

However some commenters slammed her for setting ‘unrealistic expectations’ of what a woman’s body should look like after labor.

‘Hope this makes other new mom’s feel crap about their bodies,’ wrote one user. 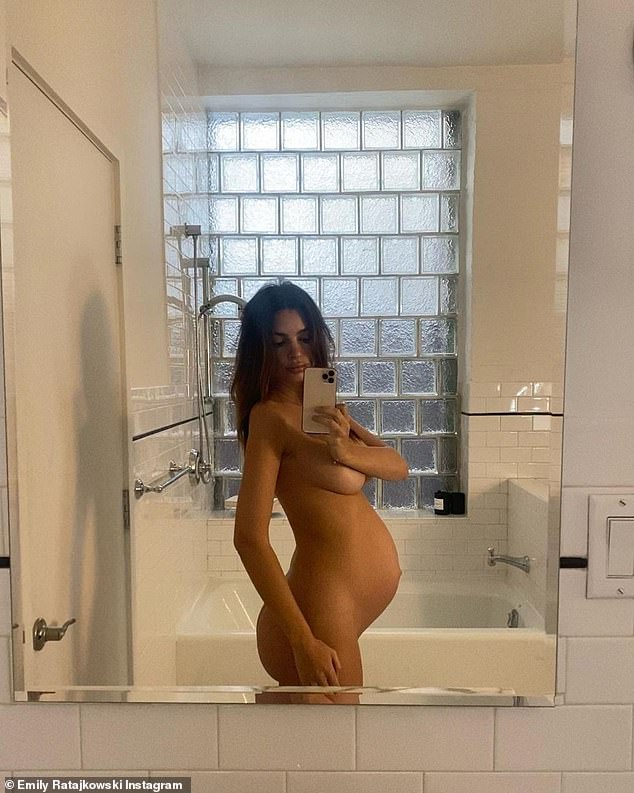 False expectations: Some commenters slammed her for setting ‘unrealistic expectations’ of what a woman’s body should look like after labor 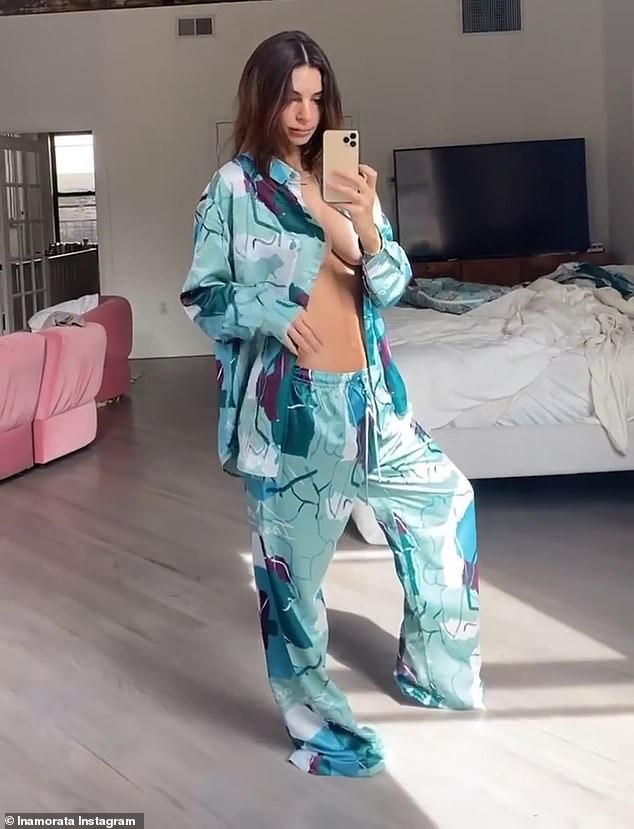 Flat stomach: ‘Hope this makes other new mom’s feel crap about their bodies,’ wrote one user

A popular Australian fitness trainer by the name of Emily Skye spoke out about the matter urging people not to ‘compare’ themselves to others.

‘I’ve seen so many people, especially mothers upset by it & compare their own bodies…Comparing & feeling inferior to people who seem ‘perfect’ is unhealthy,’ she wrote.

Though Emily is in the process of penning a collection of essays under the name ‘My Body’ about reclaiming her own image, her body continues to be a point of contention after she found fame while baring her chest in Robin Thicke’s Blurred Lines music video.

And in her Vogue  pregnancy announcement, both she and Sebastian had expressed worry about having a daughter due to bodily pressures and having a model for a mom. 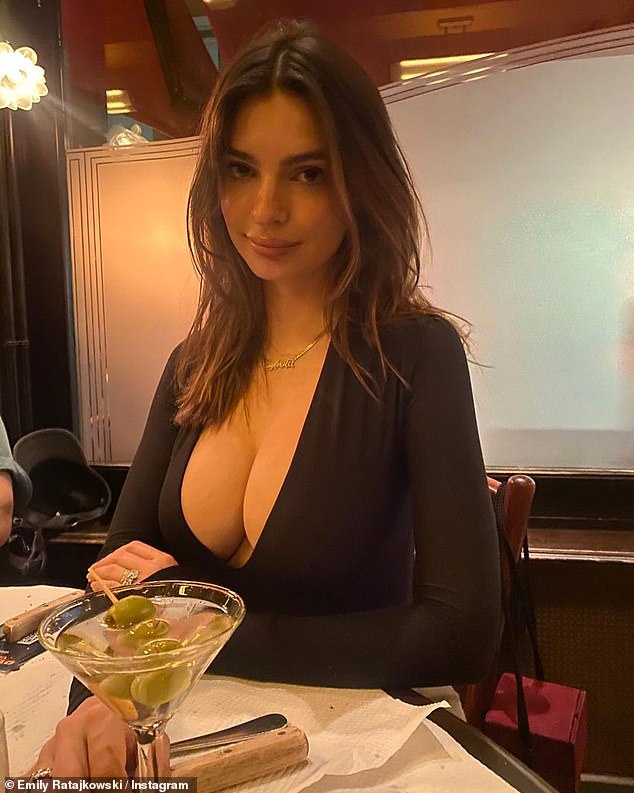 ‘I do worry a girl will have a lot to live up to as your daughter…That’s a lot of pressure,’ the producer said.

The self-proclaimed feminist and activist announced the arrival of their son Sly on March 8.

‘Sylvester Apollo Bear has joined us earth side. Sly arrived 3/8/21 on the most surreal, beautiful, and love-filled morning of my life,’ she wrote. 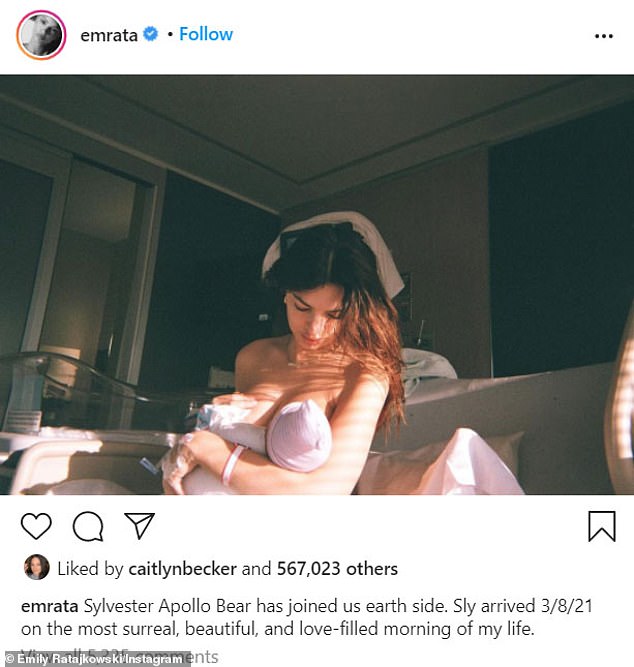 Baby bliss: The self-proclaimed feminist and activist announced the arrival of their son Sly on March 8