She has been spending long quarantine days at the beach as of late.

And Emily Ratajkowski enjoyed another sunbathing session in her bikini on Sunday.

The actress, 29, was spotted at the beach in the Hamptons with her husband, Sebastian Bear-McClard.

Life’s a beach! Emily Ratajkowski was spotted packing up as she left the beach in the Hamptons with her husband, Sebastian Bear-McClard, on Sunday

Emily put her fabulous body on full display as she hit the beach in an extra skimpy bikini.

The couple were the picture of relaxation as they traded in the hustle and bustle of city life for a day by the surf.

Emily sweetly placed her feet upon her husband’s legs as she laid out close by him, deep in a reading session.

Sebastian perused through his phone as he relaxed on a beach chair, using a navy blue cap to protect himself from the sunshine. 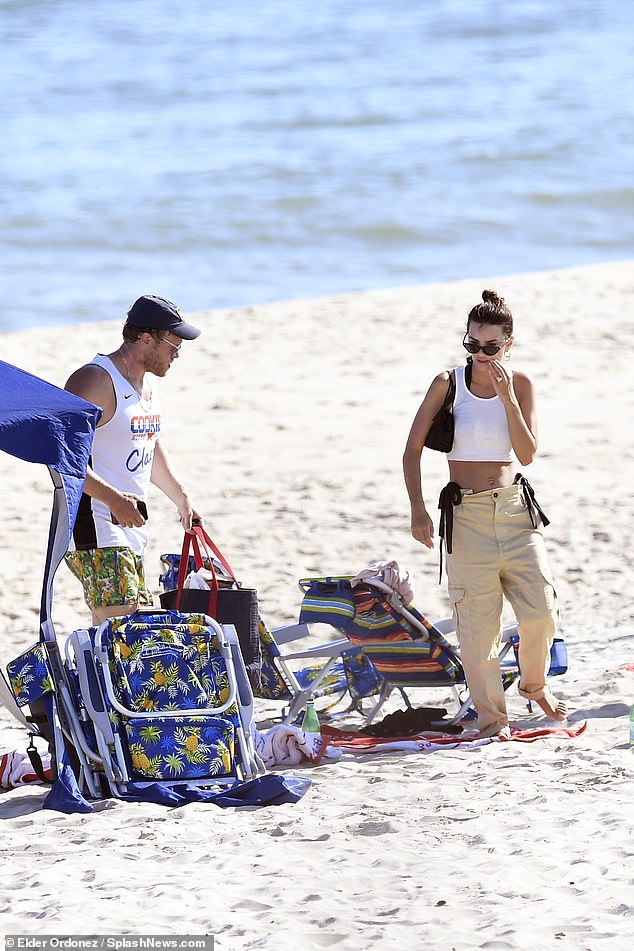 Calling it a day: The couple packed up their belongings after a day soaking up the sunshine

Eventually, the couple decided to call it a day and return home.

Emily climbed back into her regular attire before packing up their belongings.

The actress has been making the most of her free time in quarantine lately with day trips to the beach. 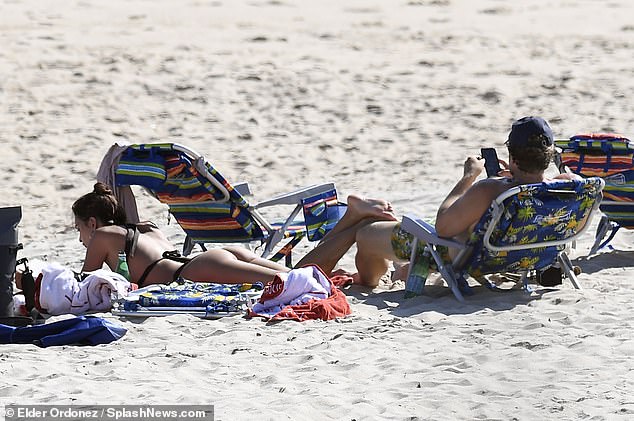 Lazy Sunday: Emily sweetly placed her feet on her husband’s legs as she caught up with her reading 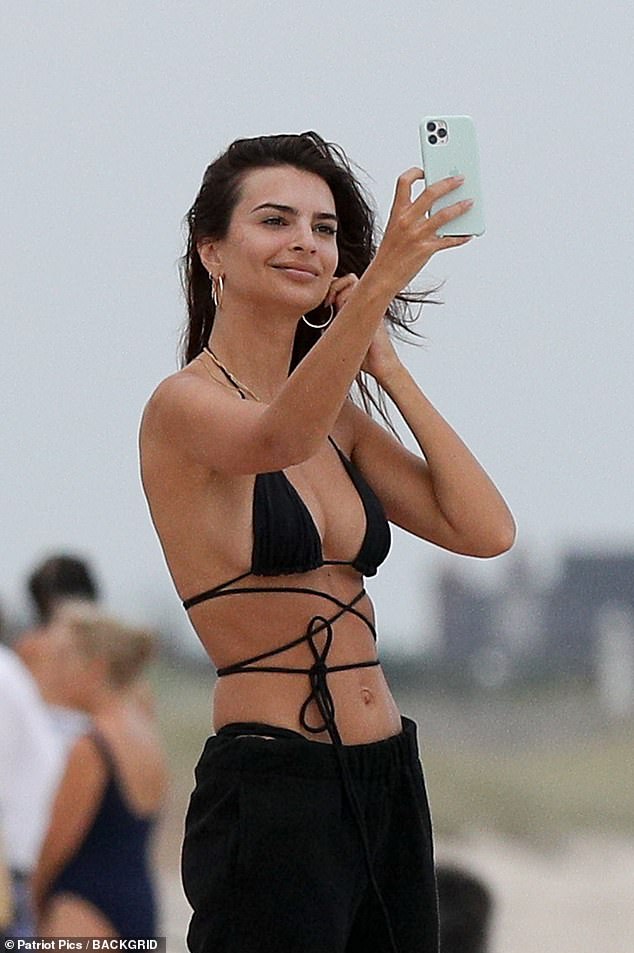 Strike a pose: A smiling Emily appeared to be taking a selfie on Tuesday

Emily was spotted enjoying another day of sea and sunshine on Tuesday, wearing a black string bikini.

The Gone Girl actress looked as happy as can be as she took a selfie on her teal-covered phone.

Emily also posted a selfie from her beach day onto Instagram, as she relaxed upon her red beach towel.

The star and her husband Sebastian have recently returned to New York after quarantining in California for a period of time. 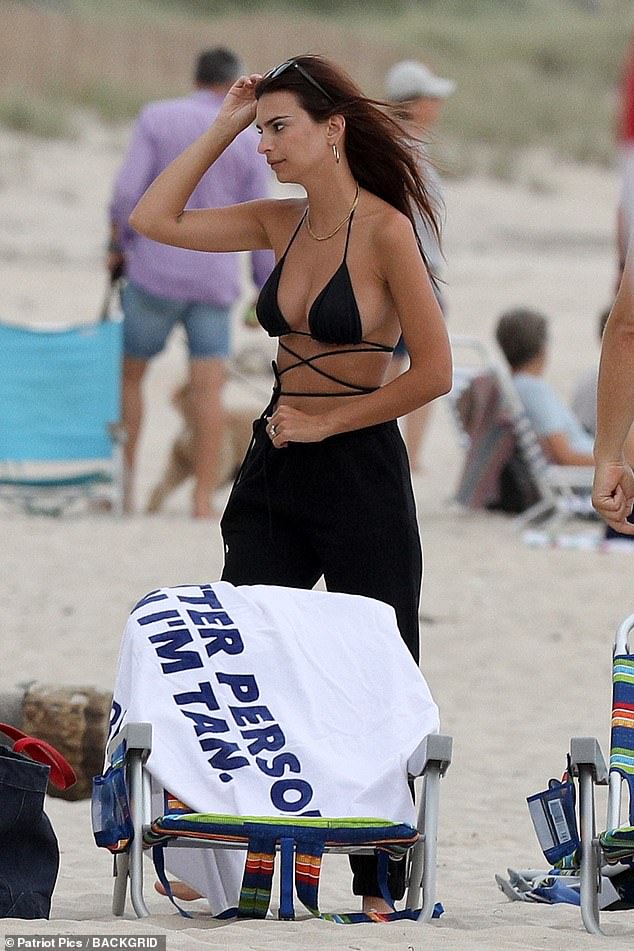 Big Apple babe: Emily and her husband Sebastian have returned to New York after quarantining in California for a period of time 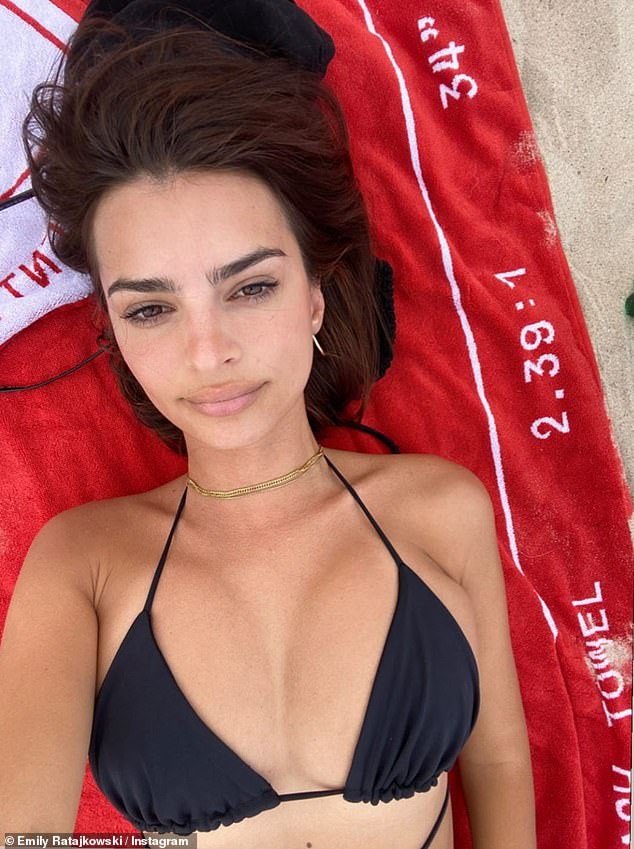 The camera loves her: Ratajkowski relaxed upon her red beach towel as she snapped a selfie

In an interview with GQ, Emily said it had been ‘interesting’ self-isolating with Sebastian, and predicted the quarantine may lead to many divorces.

‘It’s been interesting being in quarantine and married. I feel like a lot of people will end up divorced. But my husband and I are in a good partnership. And I think that I’ve learned a lot about myself being married, for sure.’

Emily surprised fans back in 2017 after announcing she had tied the knot with Sebastian at a NYC courthouse, with social media sensation Fat Jewish among those in attendance.

While the lightning-fast relationship surprised many fans, the couple were actually friends for years prior to becoming romantic.

‘Emily has known Sebastian for years,’ a source told Us Weekly at the time. ‘They were all in a friend group. He wasn’t a stranger.’ 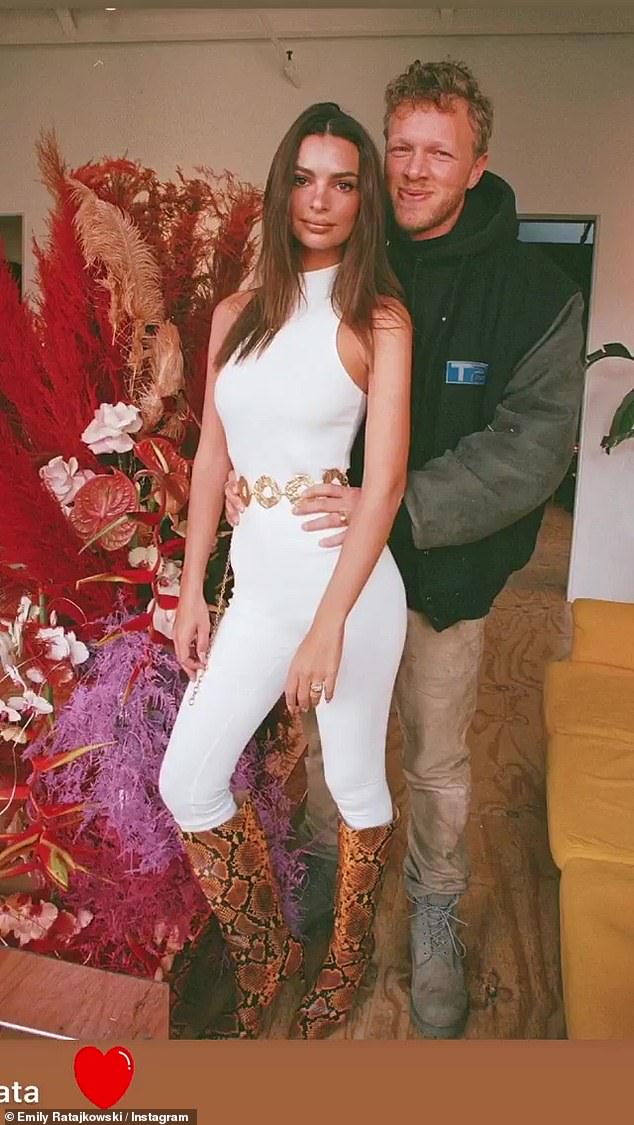 ‘My husband and I are in a good partnership’: In an interview with GQ , Emily said it had been ‘interesting’ self-isolating with Sebastian, and predicted the quarantine may lead to many divorces