Emma Raducanu has been nicknamed the ‘Teen Queen’ by Judy Murray after an epic display sent her into Saturday’s US Open final.

Raducanu is still to drop a set in the tournament and she has become the first qualifier in men’s or women’s history to reach the final of a Grand Slam.

Anne Keothavong, Team GB’s FedCup captain, was left ‘shouting at the TV like a mad woman’ as Raducanu dismantled world No 18 Maria Sakkari 6-1, 6-4 in less than 90 minutes. 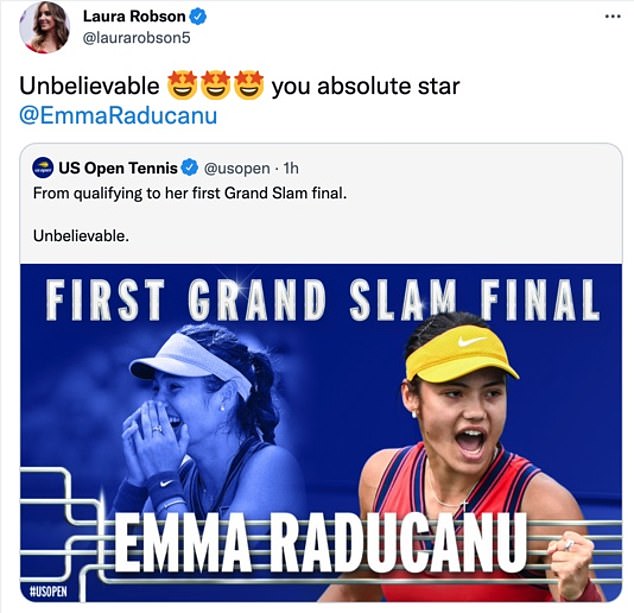 Judy Murray, Anne Keothavong and Laura Robson led the social media praise for Emma Raducanu after victory on Friday morning saw her book her place in the final of the US Open 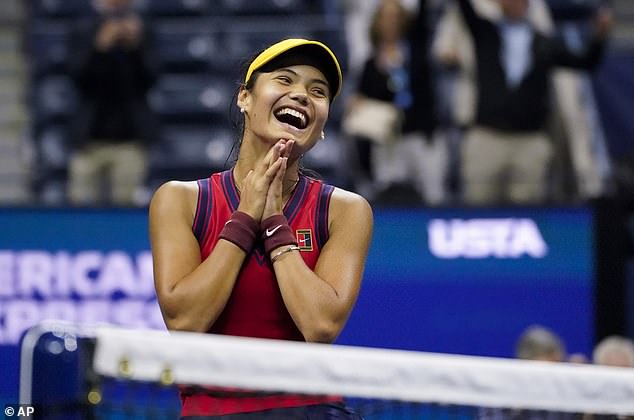 Raducanu, 18, has continued her fairytale run in New York after demolishing Maria Sakkari

Laura Robson, who knows exactly what it is like to be a teenage star in British tennis, described Raducanu’s achievements to date in New York as ‘unbelievable’.

Jo Durie, a two-time British Grand Slam champion, was watching on in awe of the youngster’s composure while the hysteria of the moment seemed to swallow up her opponent.

‘Tremendous under pressure, cool as you like. What a player.’

The British teenager, 18 produced one of the greatest displays in recent decades from a British player at a Grand Slam as she bullied Sakkari in a 6-1, 6-4 to tee up a final on Saturday against fellow teenager Leylah Fernandez.

Already she has earned a minimum $1.25million (£900,000) from the nine matches won here, and now comes the chance to bank a place in sporting history. Staggeringly, she has yet to drop a set.

British doubles player Neal Skupski made sure he was tuned in for Raducanu’s biggest match of her career to date and he simply wrote: ‘Amazing again’.

Former British No 1 Greg Rusedski was in the Amazon Prime studio to dissect Raducanu’s performance but it was Twitter where he waxed lyrical on the Brit’s performance.

Rusedski, who tipped Sakkari before the match, wrote: ‘Didn’t see this coming with Emma Raducanu.

‘Thought this was going to be a tight and tough match.

‘This looks like the performance of someone who is going to be a world No 1 and multiple grand slam champion. Wow!’