France’s President Emmanual Macron and his wife Brigitte arrived in Washington Monday to be guests at President Trump and first lady Melania Trump’s first state dinner of the administration.

Tonight the couples will dine at Mount Vernon after a helicopter ride over Washington to Virginia following a low-key welcome to the White House for the leader who has developed an unlikely friendship with Trump, a fellow political novice.

A grand ceremony will take place on the South Lawn of the White House on Tuesday morning when Macron returns to 1600 Pennsylvania Ave. for formal talks with the U.S. president. 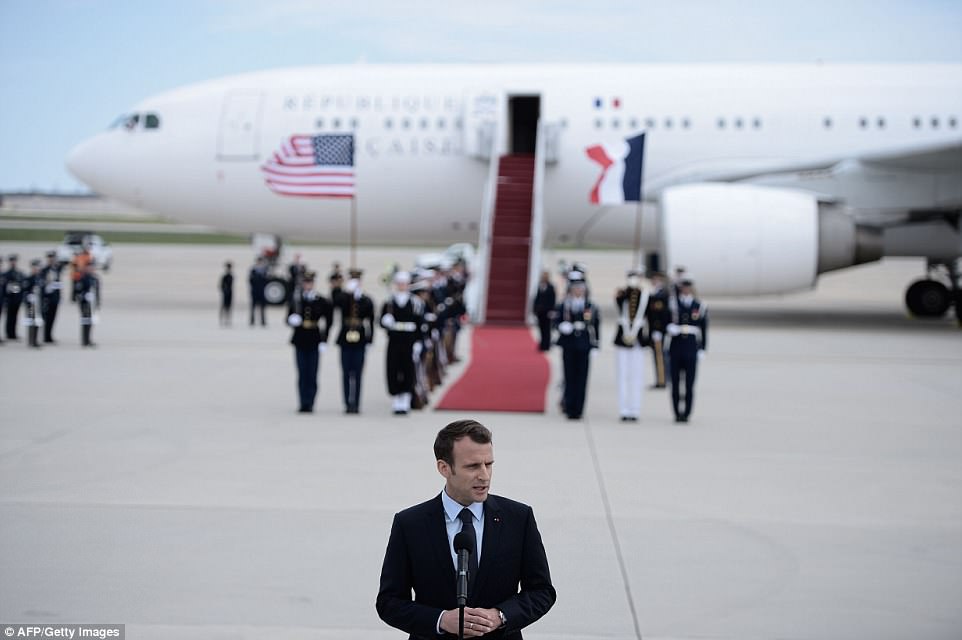 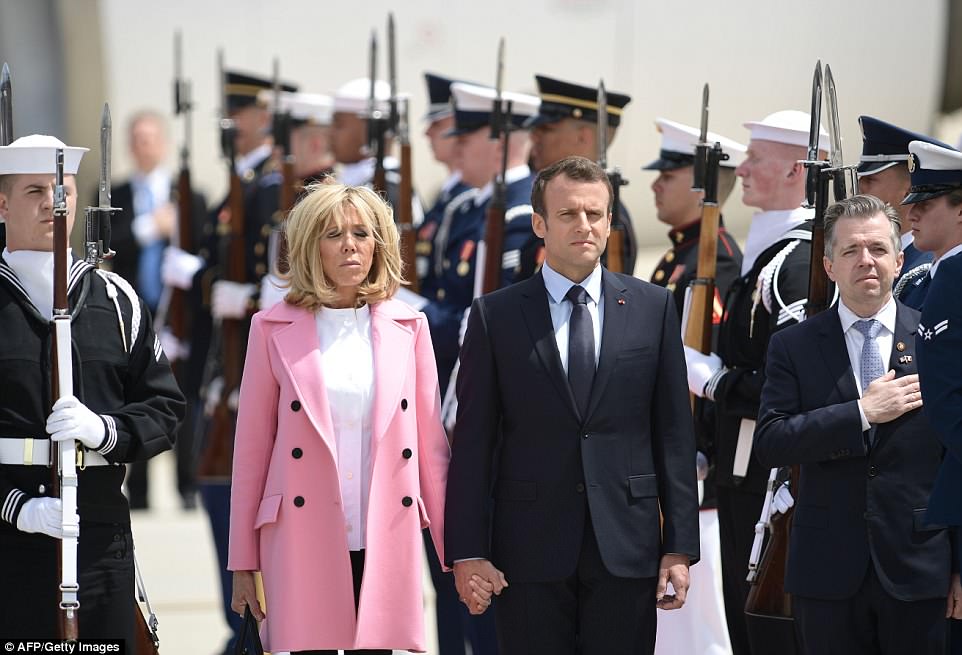 French President Emmanuel Macron and his wife Brigitte Macron listen to the U.S. National Anthem at Joint Base Andrews as they arrive in the United States for President Trump’s first state dinner 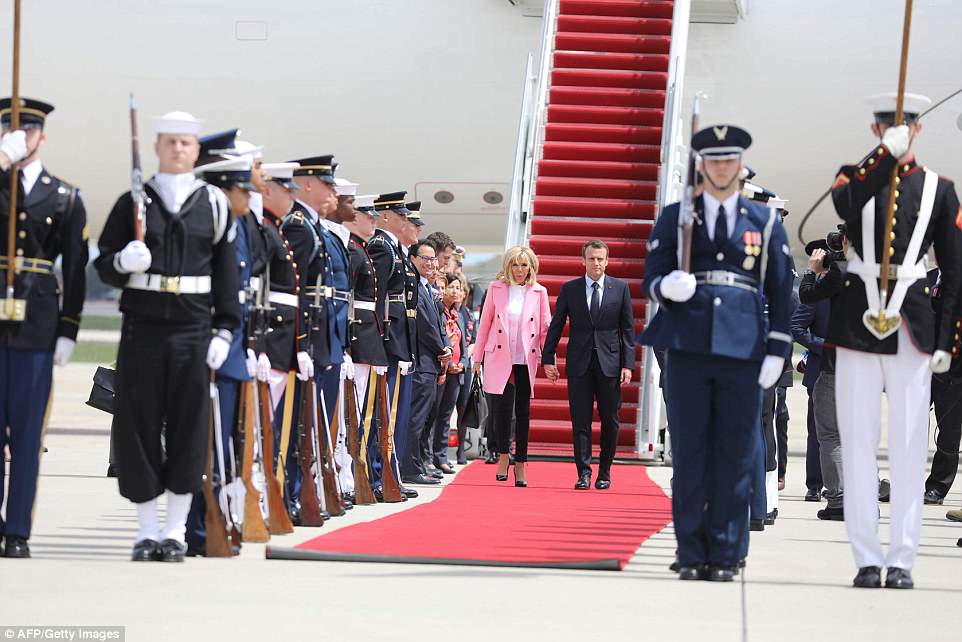 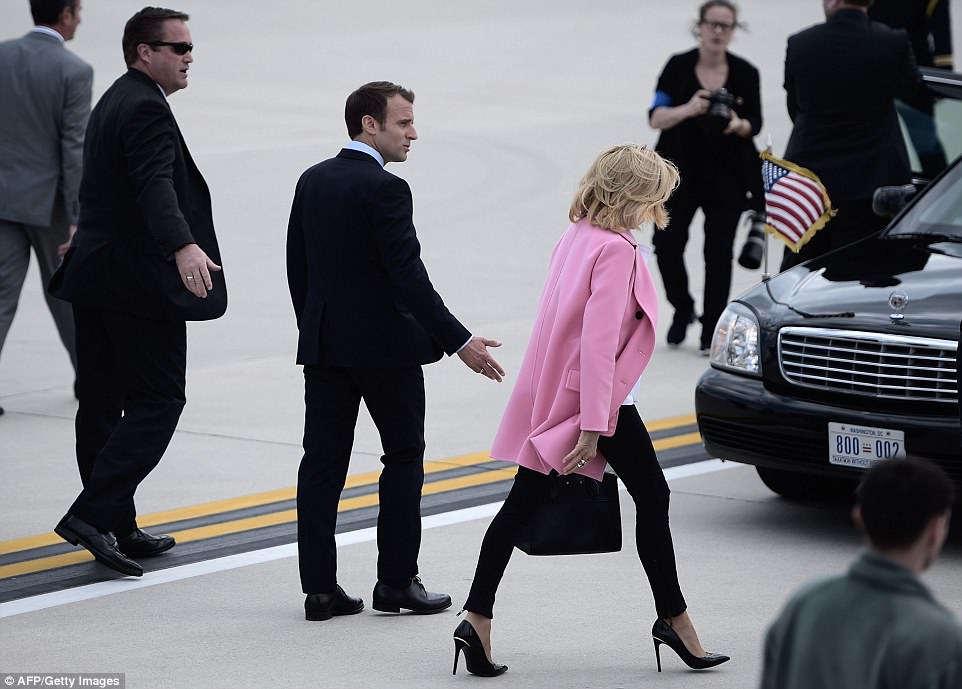 Brigitte Macron arrives in the U.S. wearing sky-high black high heels and a Barbie-pink coat. The first couple of France will attend a dinner at Mount Vernon with the Trumps tonight 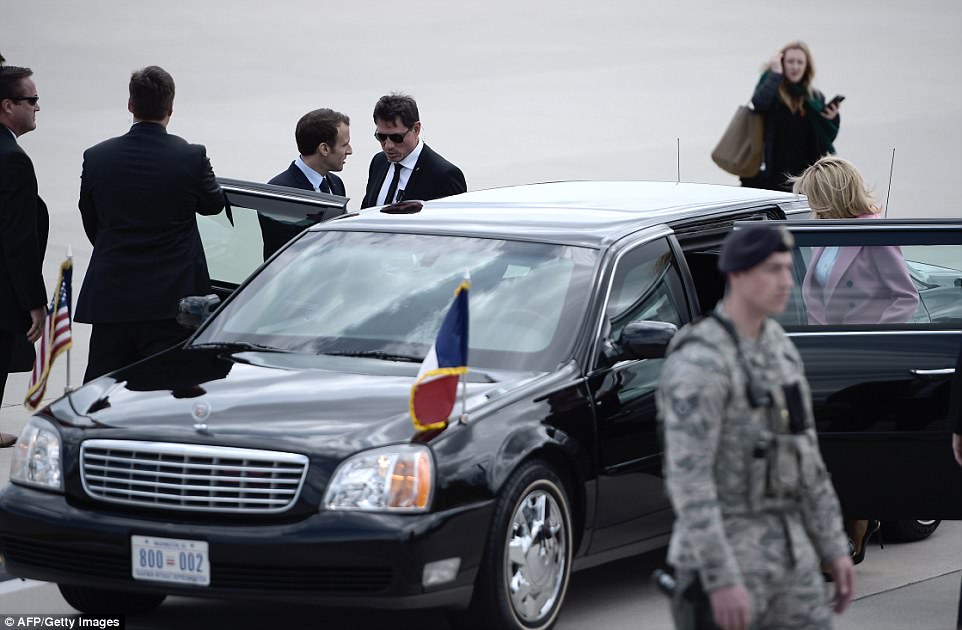 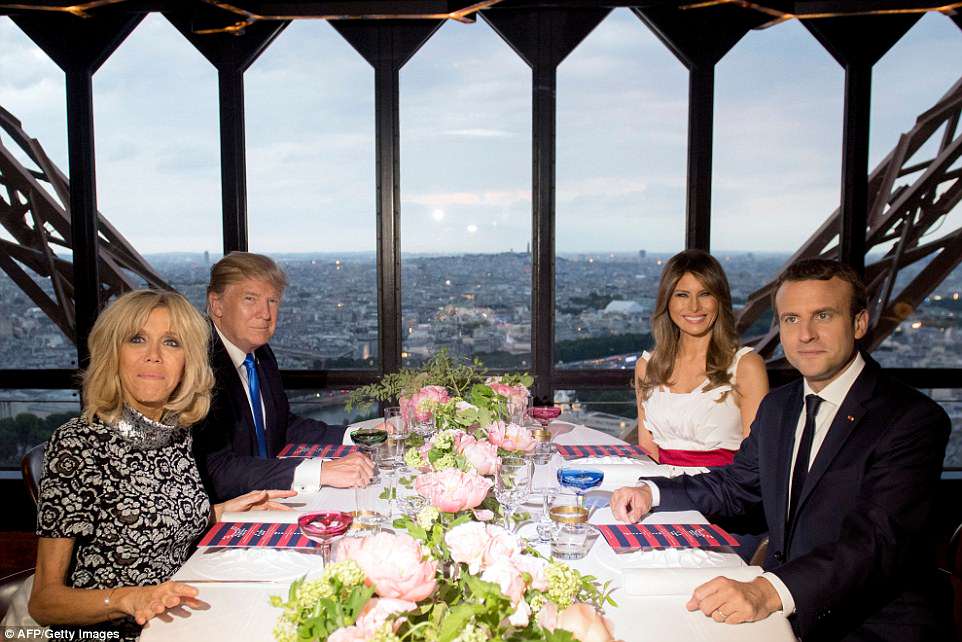 Donald and Melania Trump will entertain their French counterparts at a special dinner this evening at the estate that belonged to America’s first president, George Washington 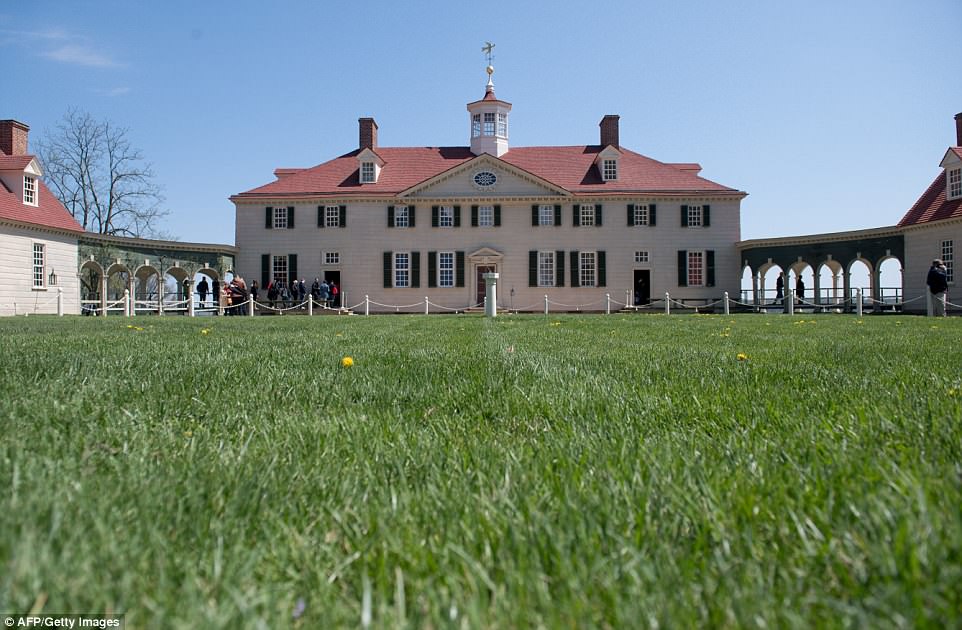 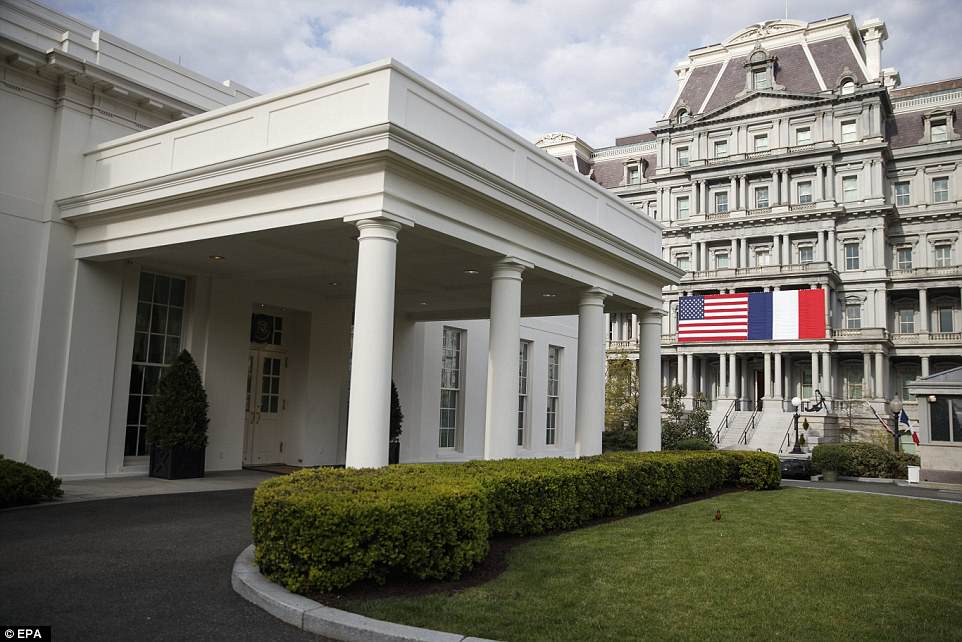 The Trumps will receive the Macrons at the North Portico, in a low-key welcome to the White House for the leader who has developed an unlikely friendship with Trump, a fellow political novice

Trump and Macron have bonded in the year since the French president was elected despite major ideological differences that are most apparent in their approaches to international issues like the climate and tariffs.

They don’t see eye-to-eye on taming Iran, either, and the long-term role of the U.S. in Syria.

WHAT’S ON THE MENU

The two presidents have formed a partnership to confront brutal dictators and terrorist groups, though, as reflected in their recent assault on Bashar al-Assad after he violated human rights norms with his use of chemical weapons.

Their buddy act is drawing comparisons to the ‘special relationship’ to the U.S. has traditionally had with Great Britain, which joined in the strikes fewer than two weeks ago Assad’s chemical weapons facilities in Syria.

President Trump has not visited Britain’s Theresa May in Britain, putting off or outright cancelling expected trips. A new one is on the books for this summer, officials on both sides of the alliance said last week, but a date has not been locked in.

The president and first lady meanwhile spent two days in Paris last July and were the Macrons guests of honor at the annual Bastille Day parade that celebrates France’s independence.

In the City of Lights, Macron welcomed Trump with a military band as Les Invalides, a military museum and monument, and took him to a five-star dinner inside the Eiffel Tower.

They ended the visit, during which Trump told Macron’s 64-year-old wife, ‘You’re in such good shape,’ with an effusive display of hugging, hand-yanking and back slapping.

Their long goodbye was reminiscent of an earlier hand shake, at their first face-to-face in Brussels in May, that was the very definition of a grip-and-grin. 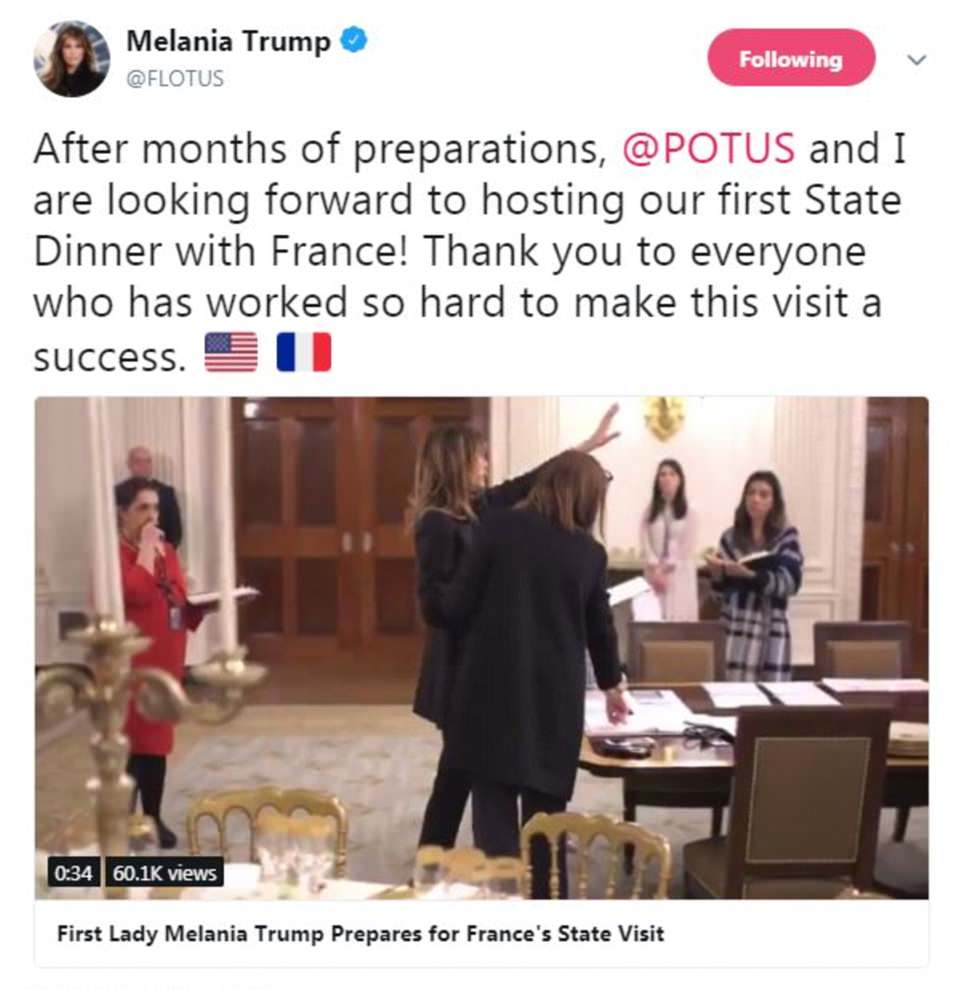 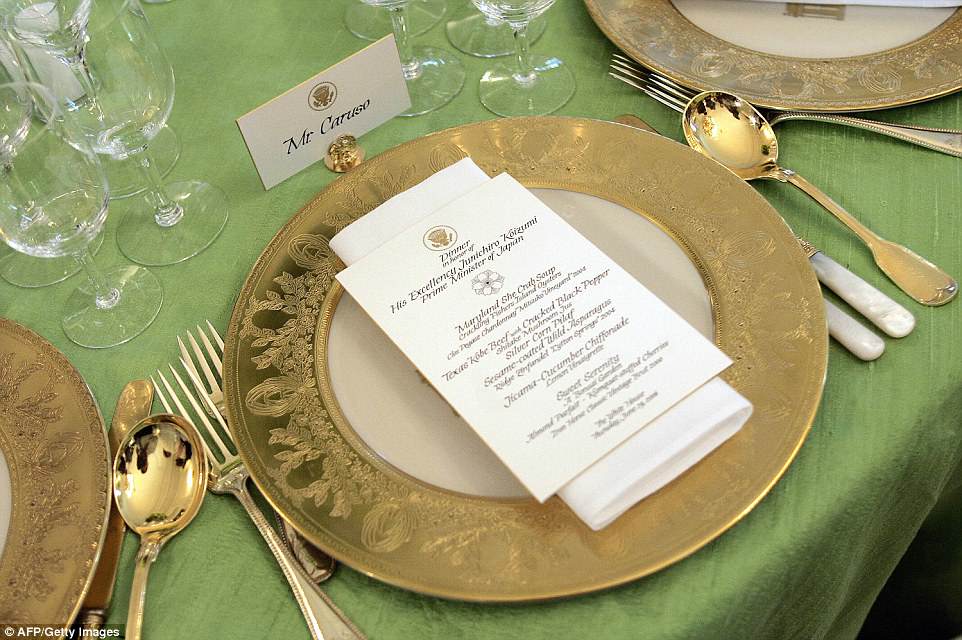 The Clinton China rests on a table as First Lady Laura Bush gives the press a preview of the dining room for the State Dinner in honor of Japanese Prime Minister Junichiro Koizumi’s visit to the White House in 2006. First Lady Melania Trump has also selected the Clinton China for her event 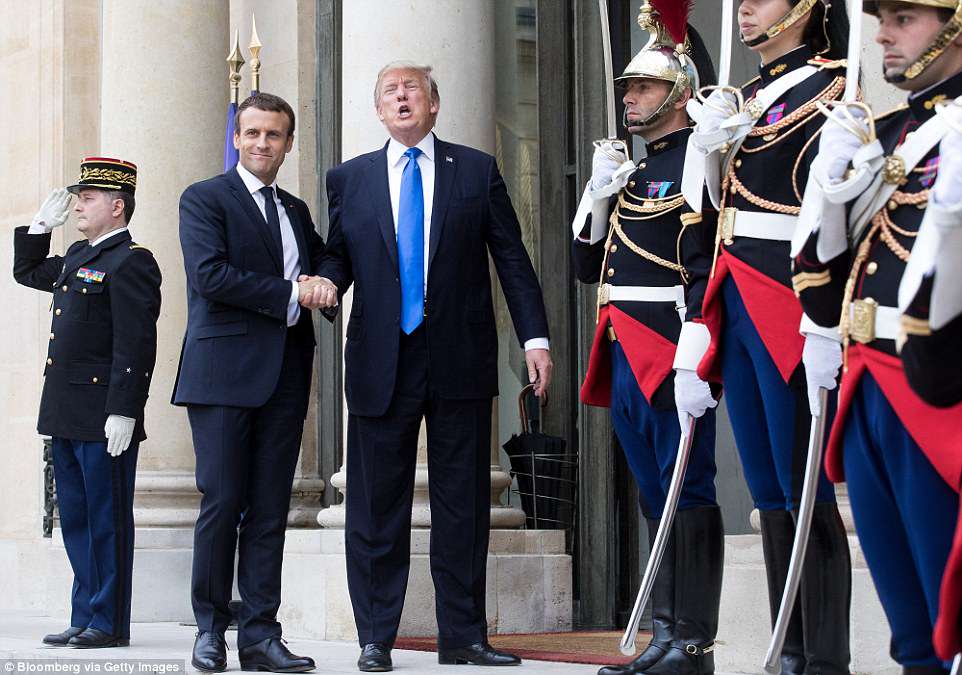 The president and first lady meanwhile spent two days in Paris last July and were the Macrons guests of honor at the annual Bastille Day parade that celebrates France’s independence. Trump and Marcon are seen at Elysee Palace in July

Recalling the handshake in an interview with Fox News that aired on the network Sunday, Macron said it was actually ‘a very friendly moment.’

‘Seeing Prime Minister Abe and some of the different victims – I resisted,’ he admitted. ‘But in fact, I mean, it was — it was a very natural moment, I have to say. And a very friendly moment. Don’t worry.’

He said that he and Trump had developed a ‘strong personal relation’ based on their interactions, including the trip to Paris for Bastille Day.

Macron also told Fox, ‘I think we are very much in line on some very critical issues of this world—and especially counter terrorism and fight against ISIS.’

A senior U.S. official said Friday that this week’s festivities in Washington are ‘something of a celebration of the relationship.’

‘I think it’s indicative of a desire to continue to forge a close relationship, a stronger relationship, a relationship that’s already very strong, I think — among the strongest that we have of any allies and partners in the world,’ the official said.

However, the senior Trump administration official also predicted that there would be ‘a full and free airing of points of view’ on global issues during their talks this week, ‘many of which we feel are pretty closely aligned France, and then a few which may not be as tightly aligned.’

‘But more than anything, I think what the President would like to hear from President Macron is his counsel and his point of view and his perspective, the official said. 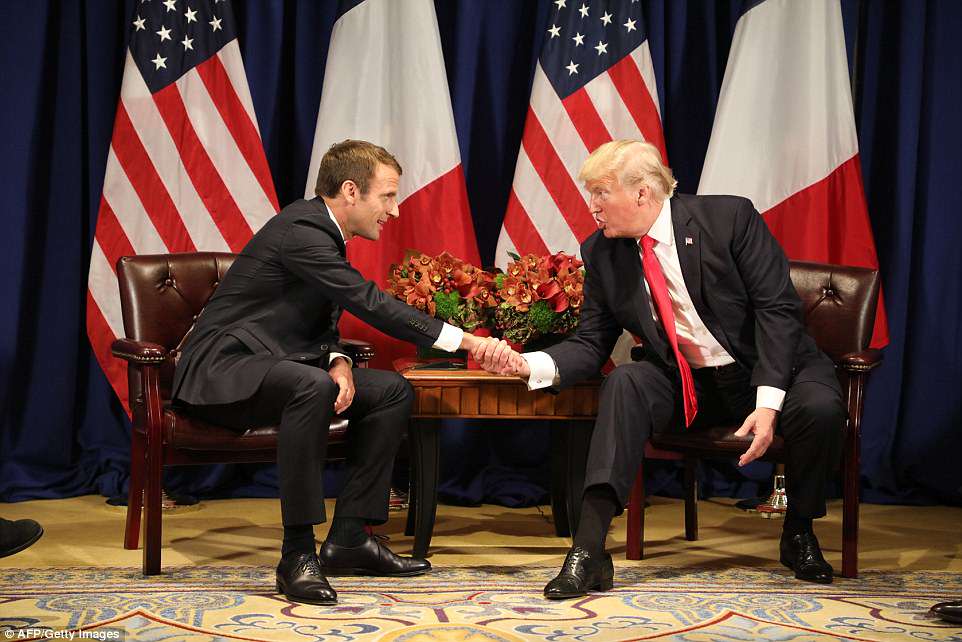 France’s president Emmanuel Macron (L) and US President Donald Trump shake hands before a meeting at the Palace Hotel during the 72nd session of the United Nations General Assembly on September 18, 2017, in New York

The Macrons are not arriving to the White House empty-handed. They’re bringing a sapling European Sessile Oak, the first lady’s office says, that is approximately 4.5 feet tall and between 5-10 years old.

Alongside the Trumps, they will will plant the tree that comes from Belleau Woods, a landmark tied to the United States’ entry into World War, before their dinnertime departure to Mount Vernon.

Tomorrow morning the White House says that 500 members of the military from five branches will be on the South Lawn for a ‘Review of the Troops’ when the Macrons arrive.

Cabinet secretaries, Members of Congress and military families will be present, in addition to students from Maya Angelou French Immersion School of Temple Hills, Maryland.

Presidents Macron and Trump will hold bilateral talks on Tuesday morning and appear side-by-side at a joint news conference after. A state dinner is to follow that Politico says will have 150 guests.

Democrats and members of the media are getting the short shrift this year. Neither were invited to the meal that’s taking place in the White House’s State Dining Room, aside from Louisiana Gov. John Bel Edwards.

A scaled-down affair, Trump’s first state dinner will not take place under the cover of tents set up on the South Lawn that were a hallmark of Barack Obama’s dinners.

The parade of celebrities who came to those formal affairs is expected to be all but non-existent.

A guest list has not been released yet for Tuesday’s dinner.

House Speaker Paul Ryan’s office confirmed to DailyMail.com that he would be in attendance.

The Washington National Opera will provide the evening’s entertainment.

The first lady’s office has been overseeing the state dinner that comes much later in Trump’s tenure than his predecessors’.

Barack Obama and George W. Bush held state dinners in November and September, respectively, the first year of their presidencies.

France is getting its turn earlier under Trump than it did under either previous American president, with the last two coming in 2007 and 2014.

First lady Melania Trump highlighted the work her office has done to make her husband’s first state dinner a reality in a morning tweet that said: ‘After months of preparations, @POTUS and I are looking forward to hosting our first State Dinner with France! Thank you to everyone who has worked so hard to make this visit a success.’

China from both the Bill Clinton and George H.W. Bush administrations will be used during the upscale meal. 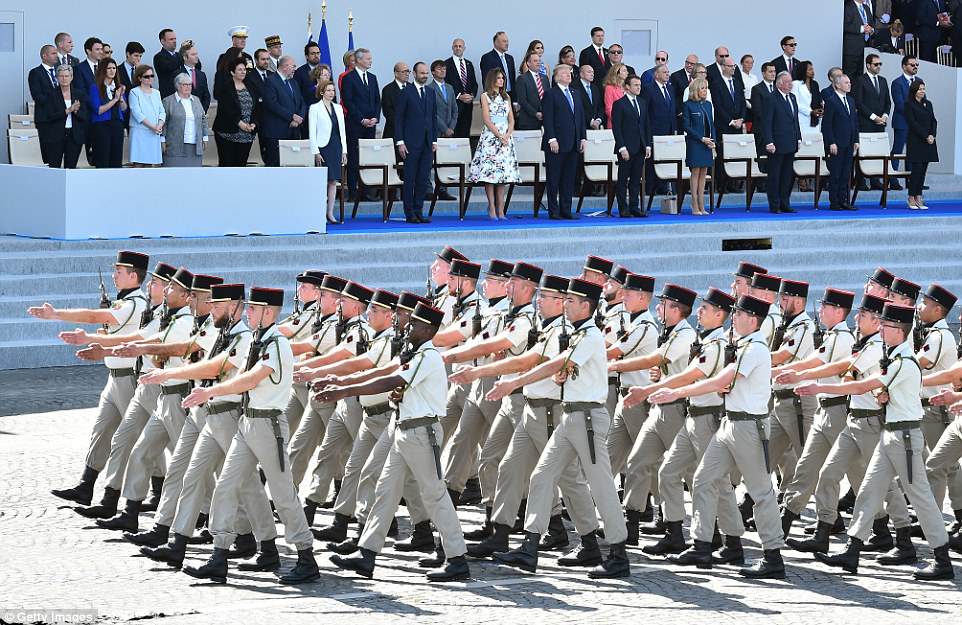 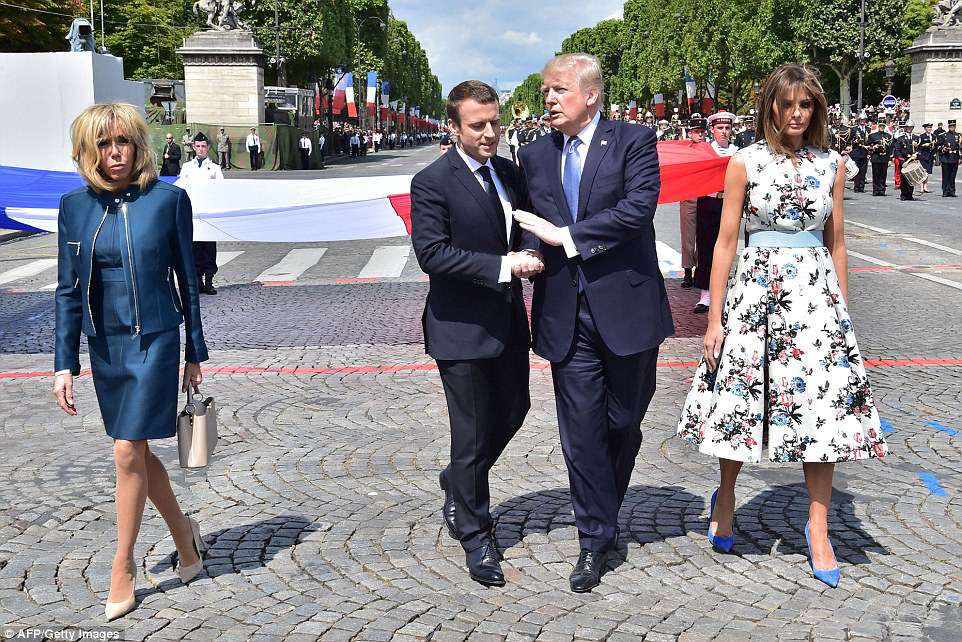 They ended the visit, during which Trump told Macron’s 64-year-old wife, ‘You’re in such good shape,’ with an effusive display of hugging, hand-yanking and back slapping 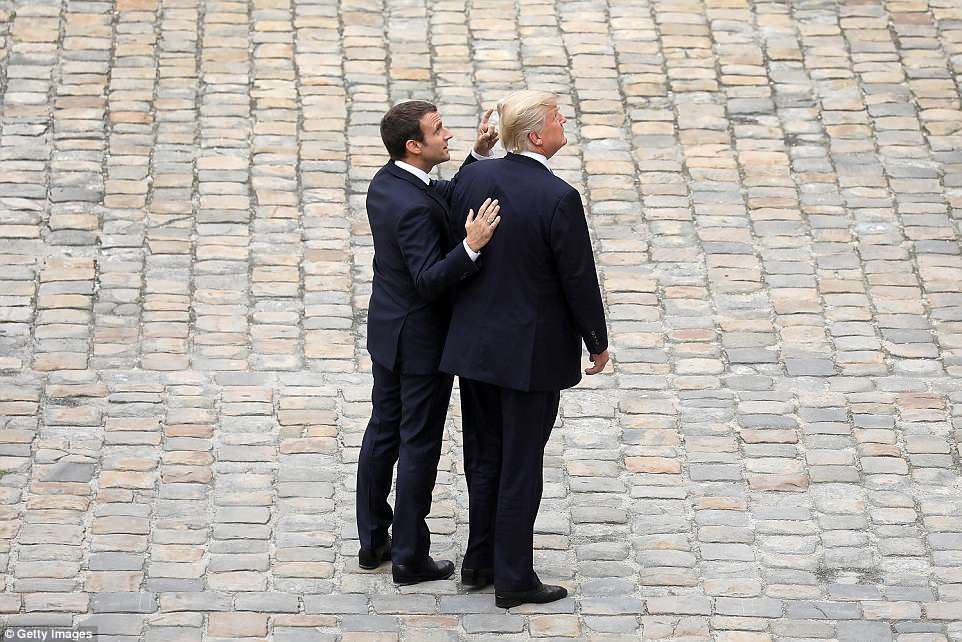 In the City of Lights, Macron welcomed Trump with a military band as Les Invalides, a military museum and monument (pictured) and took him to a five-star dinner inside the Eiffel Tower.

An East Room performance of actors playing Washington and Frenchman Marquis de Lafayette, whom the square in front of the White House is named after, followed the dinner.

Sarkozy took a tour of Mount Vernon on his own the next day.

Macron will address a joint session of Congress on Wednesday before departing Washington in rare speech that’s extended to only a few visiting leaders.

Macron told Fox in the special that was taped in Elysee Palace and aired on Sunday, ‘I’m very honored to come to your country at the invitation of President Trump and have the opportunity to discuss with him and go into the Congress for this address.

‘My objective is to highlight a long-term history between our two countries, based on values,’ he said. ‘And I think the U.S. today has a very strong role to play for peace in different regions of the world and especially Middle East.’

The U.S. is one of the last best hopes for bringing peace to troubled regions, he said.

‘So, I will advocate for multilateralism in front of the Congress for that, which means playing all together in order to reduce the influence and support of some rogue states and very tough dictators. And obviously fight against the terrorism together.’