An hour-long military parade took place in Place de la Concorde, the city’s largest square, as opposed to the Champs Elysees – the first time since 1945 that the street has not been the focal point of the celebrations.

The parade involved 2,195 troops, half as many as usual, with detachments limited to 49 people to help prevent the spread of coronavirus.

Meanwhile the crowd was limited to just 2,500 spectators with foreign dignitaries largely replaced by the families of health workers who died fighting the virus along with essential staff.

The event, which typically attracts tens of thousands of onlookers, has been closed to the public this year. Spectators have also been told to watch a night-time fireworks display from home and traditional parties at fire stations, which throw open their doors to welcome revellers, have been cancelled.

The parade comes a day after Macron signed a deal that guarantees £7billion in payrises and new contracts for health workers, who had planned to demonstrate opposite the square to highlight the government’s failings. 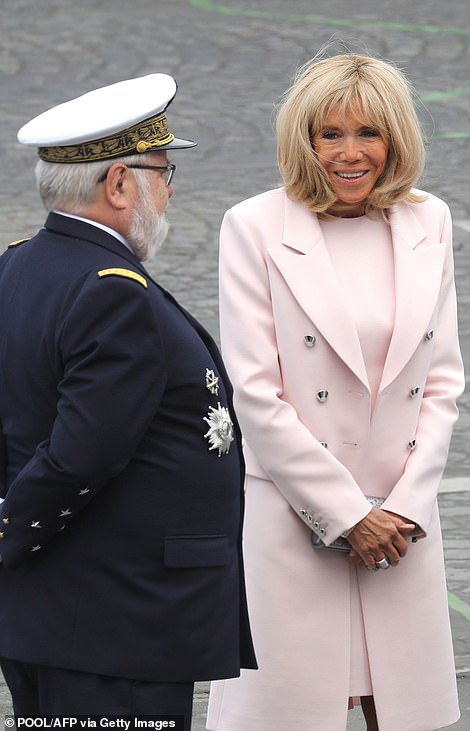 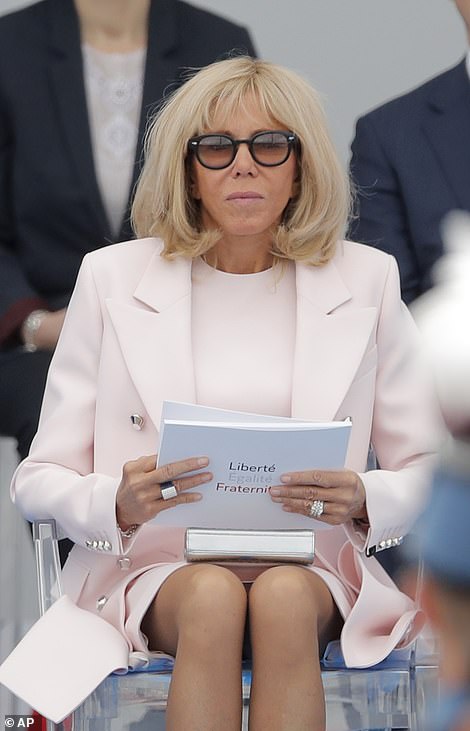 Brigitte Macron arrived separately to her husband to oversee the parade, which took place in Place de la Concorde instead of along the Champs Elysee for the first time since 1945 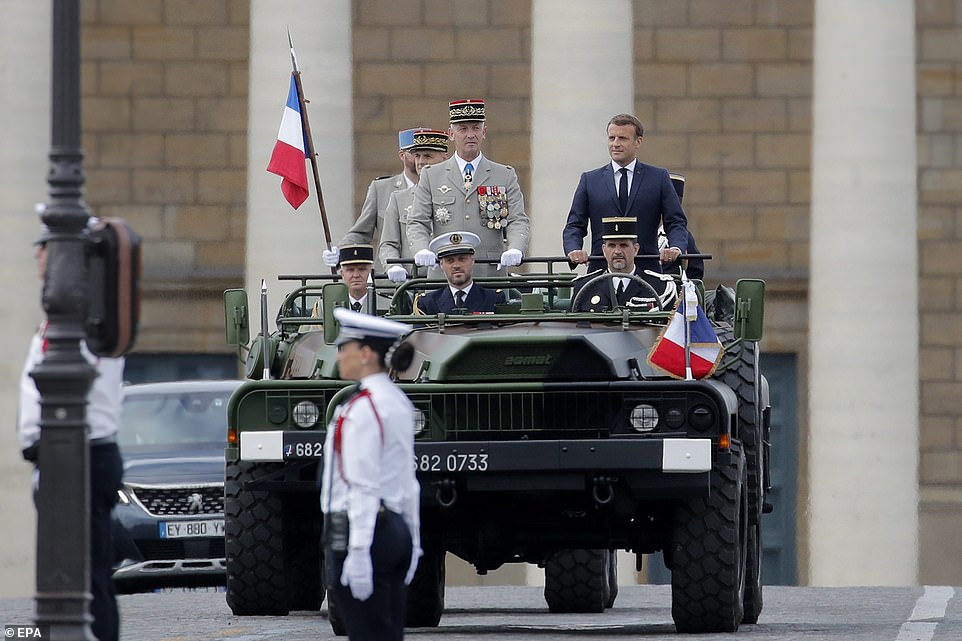 Mr Macron arrived in Place de la Concorde riding in the back of a jeep, before taking his seat in the stands to watch 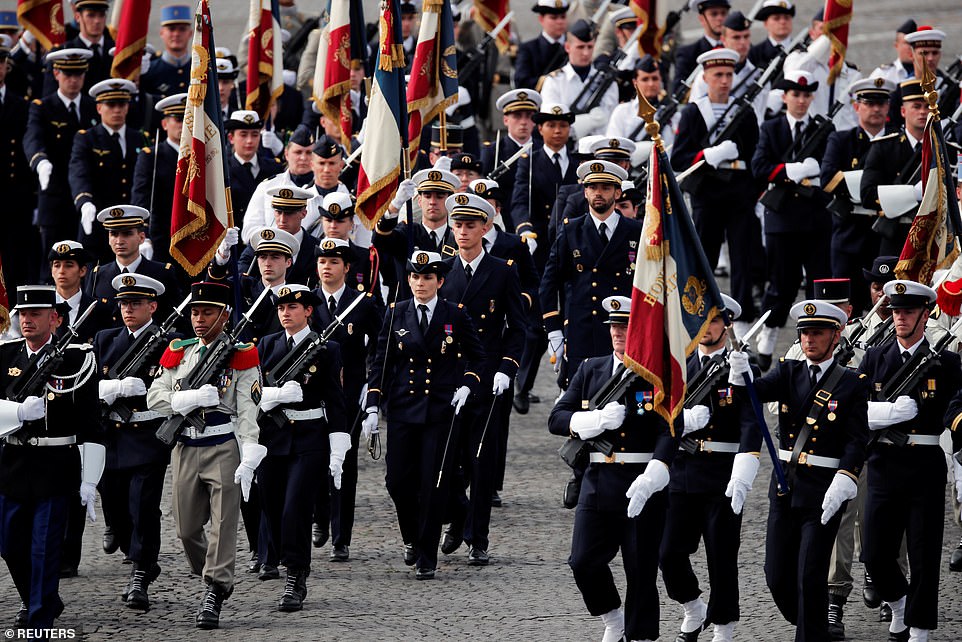 2,195 troops took part in the parade – half the usual number – with detachments limited to 49 people to help prevent the spread of coronavirus 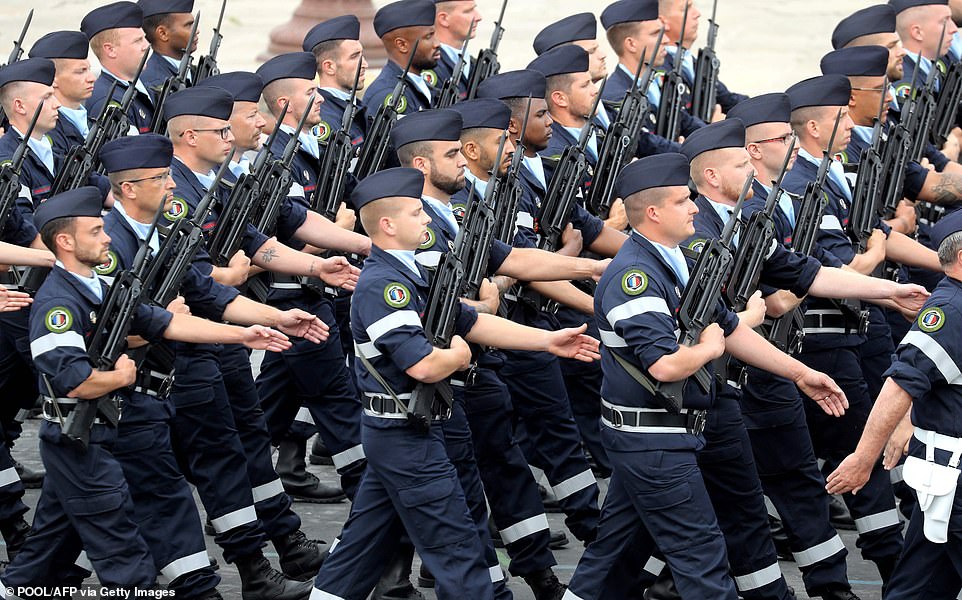 Masks were not worn during the parade itself, though some troops were pictured wearing them before and afterwards 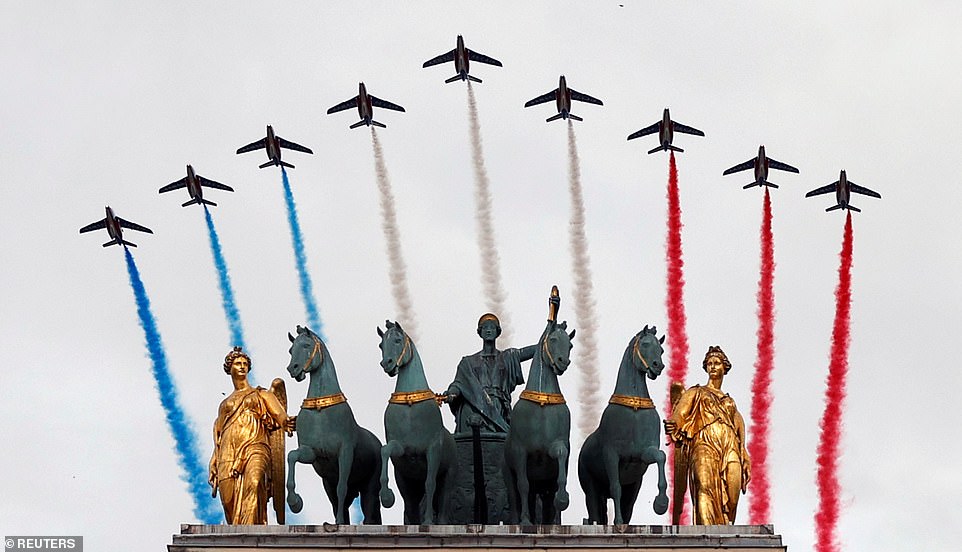 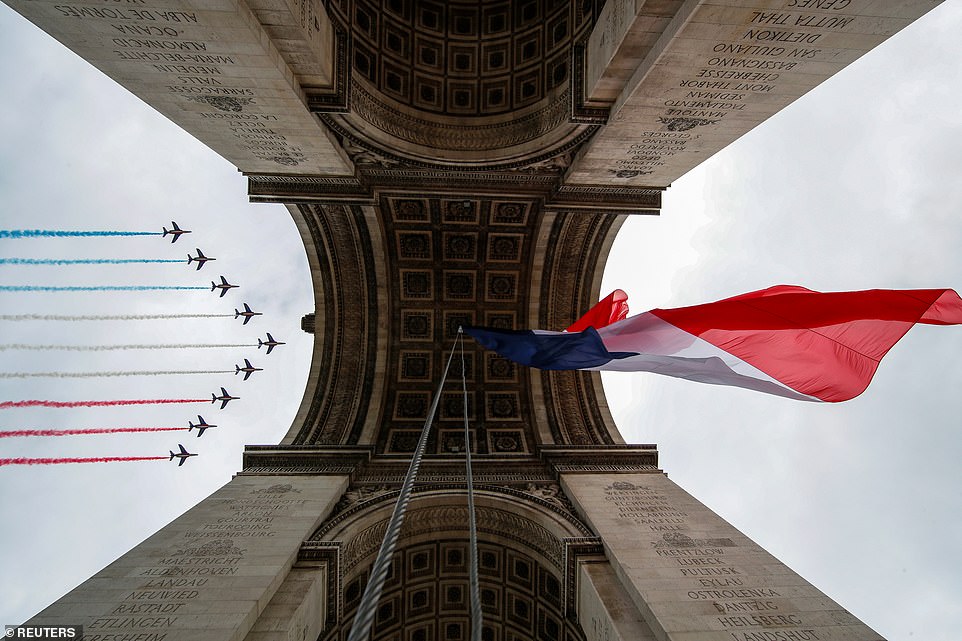 French military jets fly over the Arc de Triomphe during Bastille Day celebrations which went ahead in Paris on Tuesday, though were significantly reduced from their usual splendor 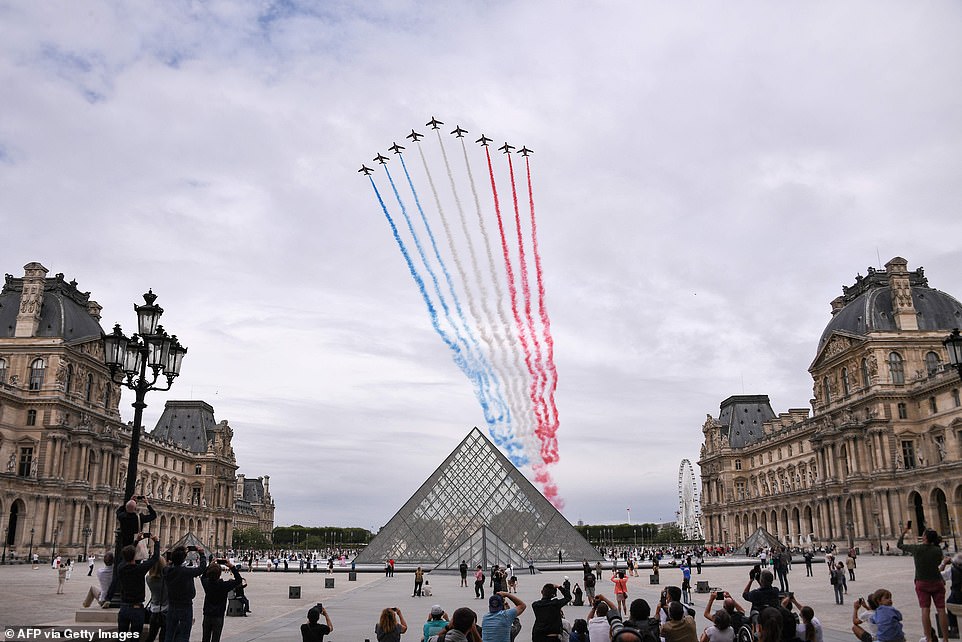 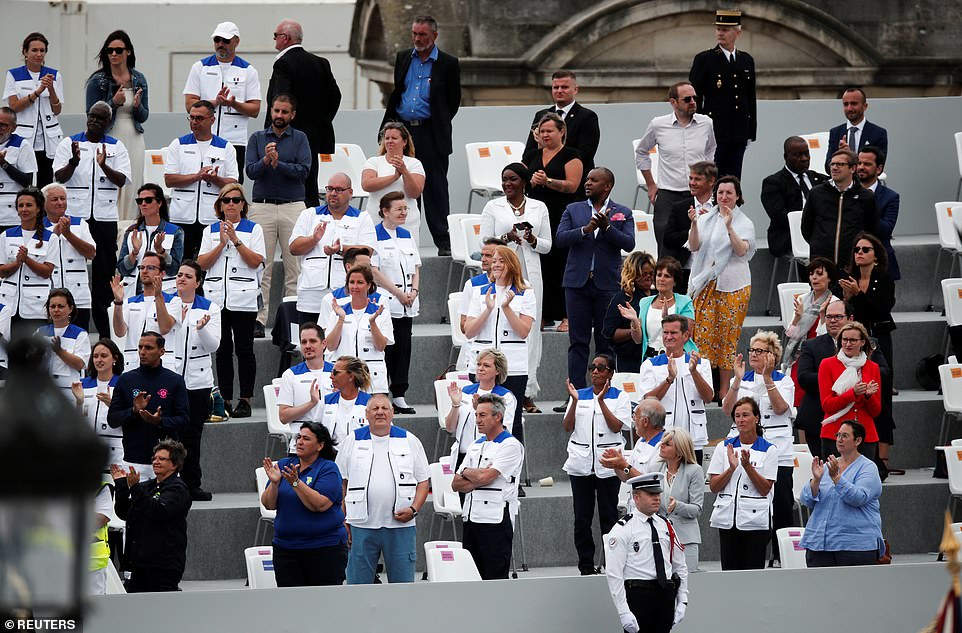 Healthcare workers and the families of staff who died while fighting the coronavirus pandemic were among 2,500 dignitaries who were invited to watch the event 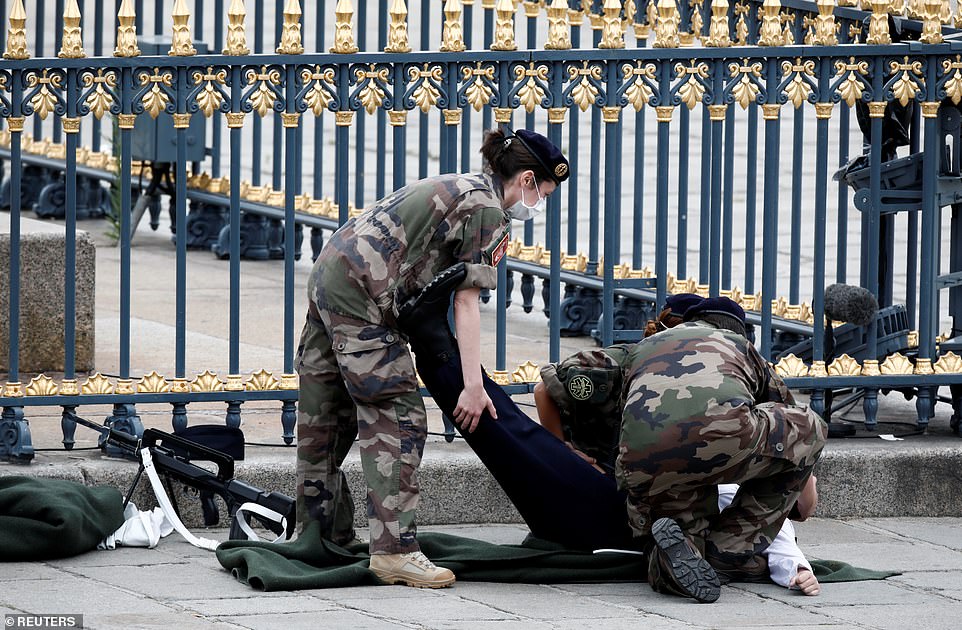 One soldier had to be helped out of the parade after passing out, with medics lifting his legs as they try to bring him around

This years’ commemoration is also paying homage to former President Charles de Gaulle, 80 years after the historic appeal he made to opponents of France’s Nazi occupiers that gave birth to the French Resistance.

‘I wish, with all the French, with the armies themselves, to pay a vibrant tribute to health workers and those who, in all sectors, have enabled public, social and economic life to continue,’ Macron said in message released ahead of the parade.

‘The dedication, tenacity, courage, solidarity that emerged strongly everywhere, in our cities as in our countryside, command admiration.’

He hailed the French military for building a field hospital and carrying patients in cargo jets or specially fitted high-speed trains, and paid tribute to the volunteers who allowed ‘our nation to hold on.’

At the start of the ceremony, fighter jets painted the sky red, white and blue in a traditional fly-past, but were also joined by helicopters that transported coronavirus emergency patients. 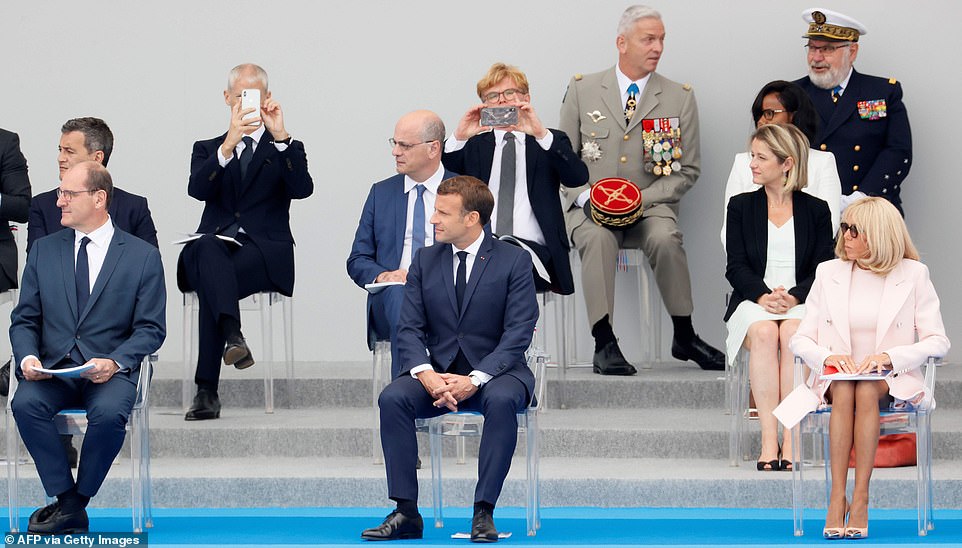 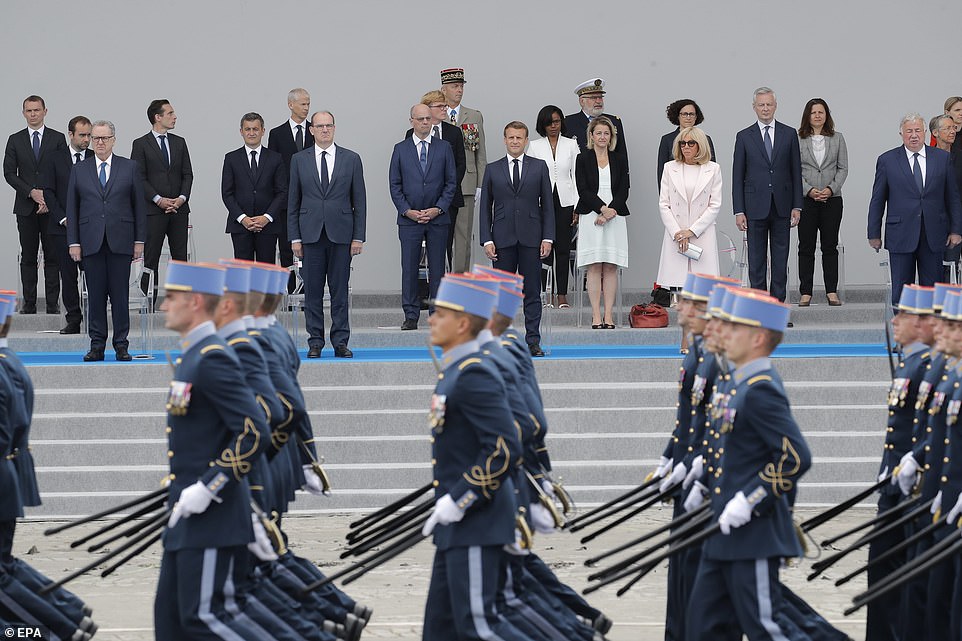 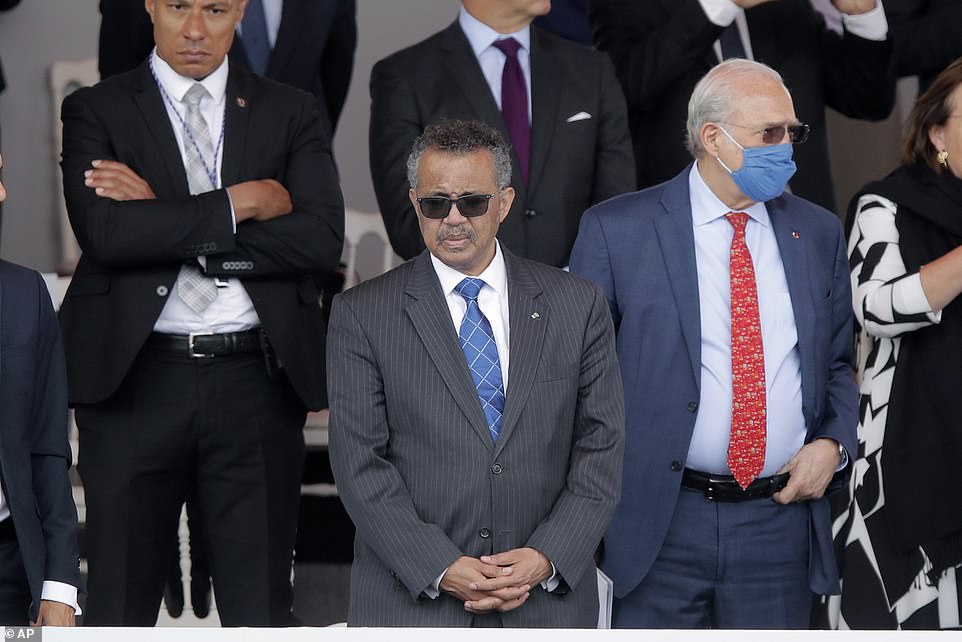 Included in the crowd was Tedros Adhanom Ghebreyesus, the head of the World Health Organisation who has faced heavy criticism for his handling of the crisis 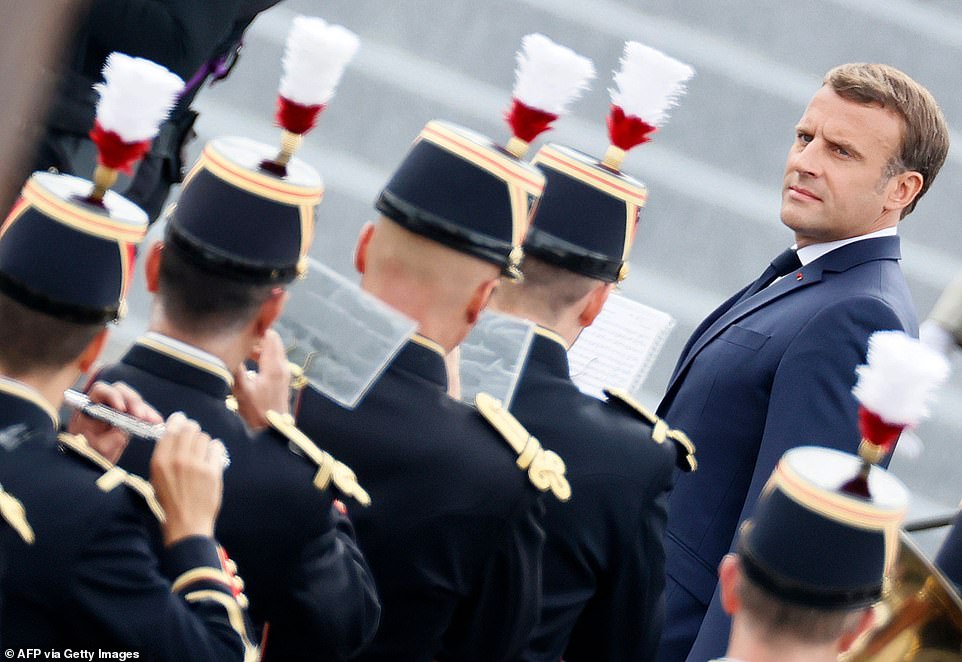 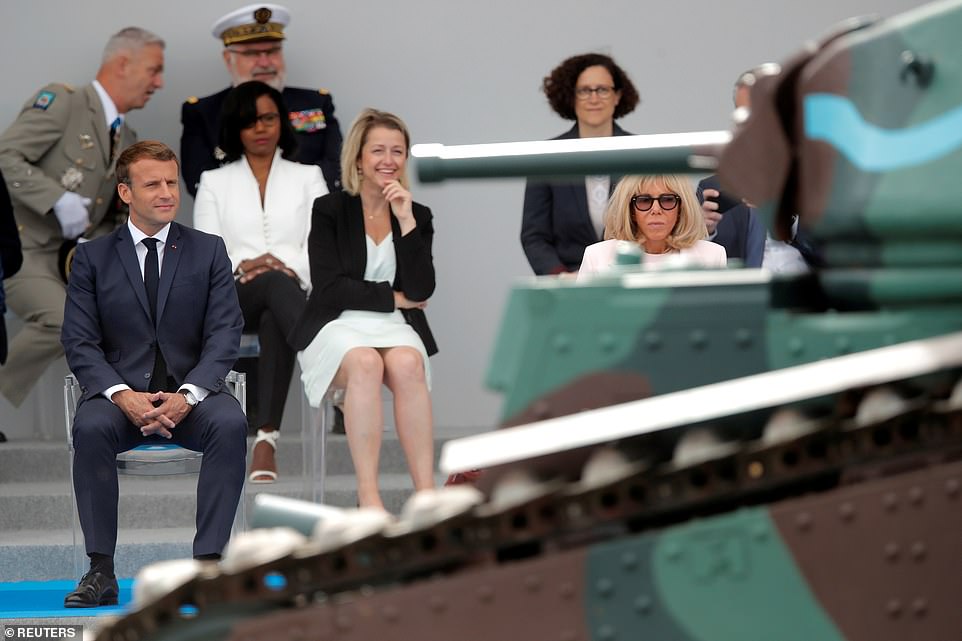 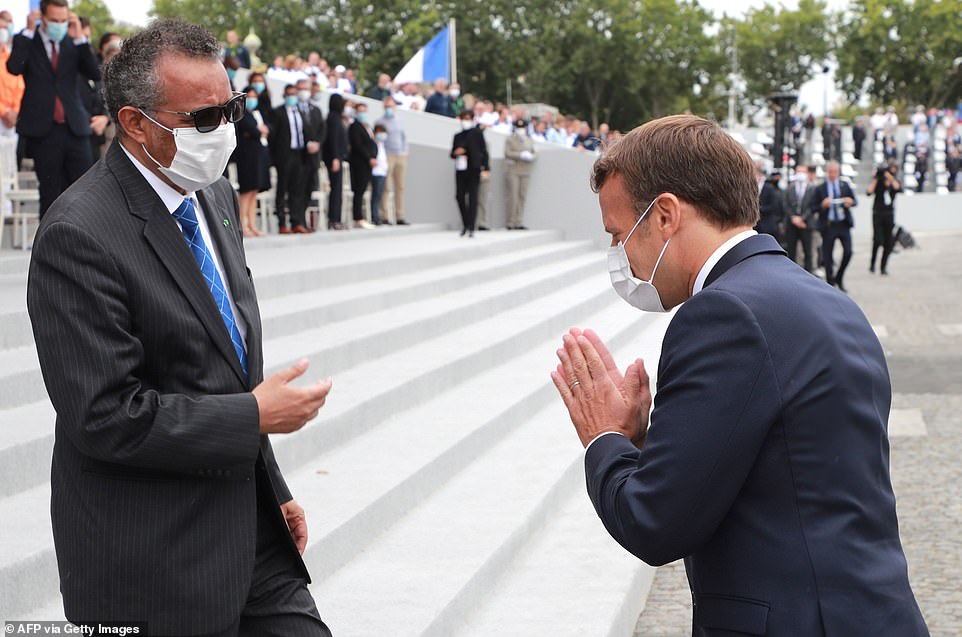 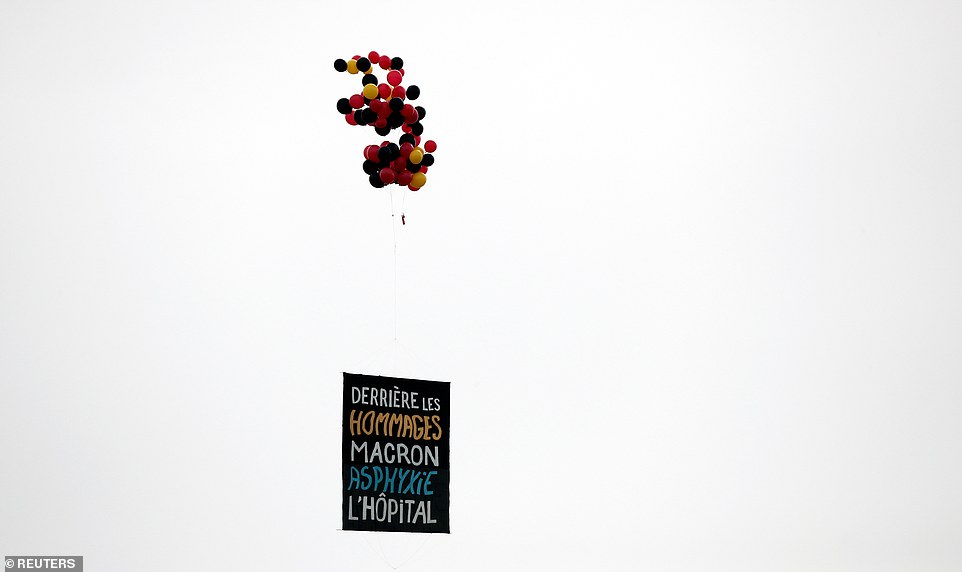 Macron’s pay deal for health staff did not entirely stop protests, with a banner reading ‘behind the tributes Macron suffocates the hospital’ floated over the parade

France is one of the hardest-hit countries in the world with coronavirus, having seen almost 210,000 patients diagnosed, and more than 30,000 deaths.

The country went into a strict lockdown in early March in order to slow the spread of the virus, before beginning a gradual reopening starting in May.

Experts are now warning of the possibility of a second wave of infections, as people head back into public spaces and fly off on holidays.

The annual events mark the storming of Bastille prison on 14 July 1789, seen as the start of the French Revolution.

The celebrations took place shortly after Macron has agreed a £7billion payrise and hiring spree for healthcare workers after they took to the streets in protest following the coronavirus crisis.

The money will largely cover pay rises for existing staff – with nurses, care workers and non-medical staff getting the bulk of it – while 15,000 new staff will be hired. 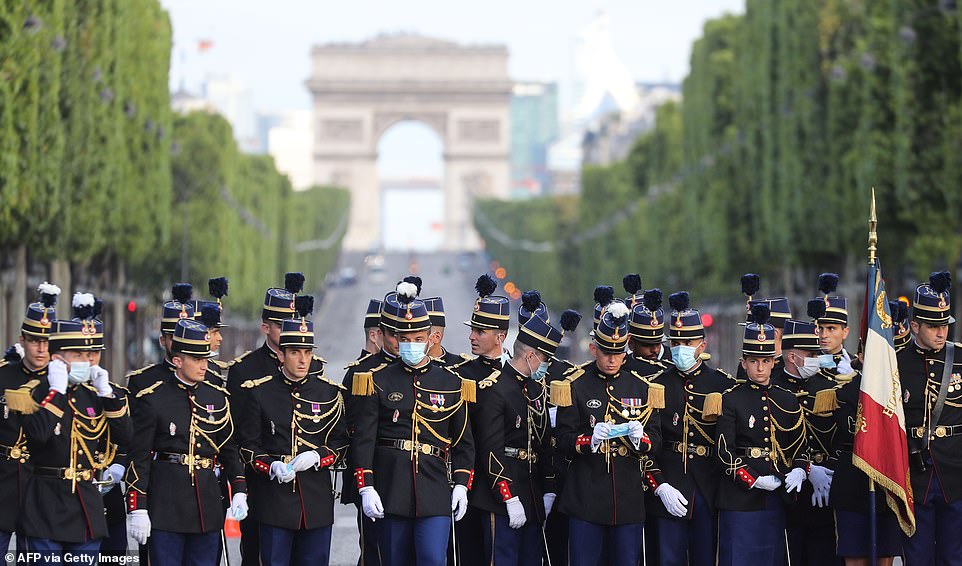 For the first time since 1945 troops did not march down the Champs Elysee (pictured), but instead marched around a square at the far end of the street 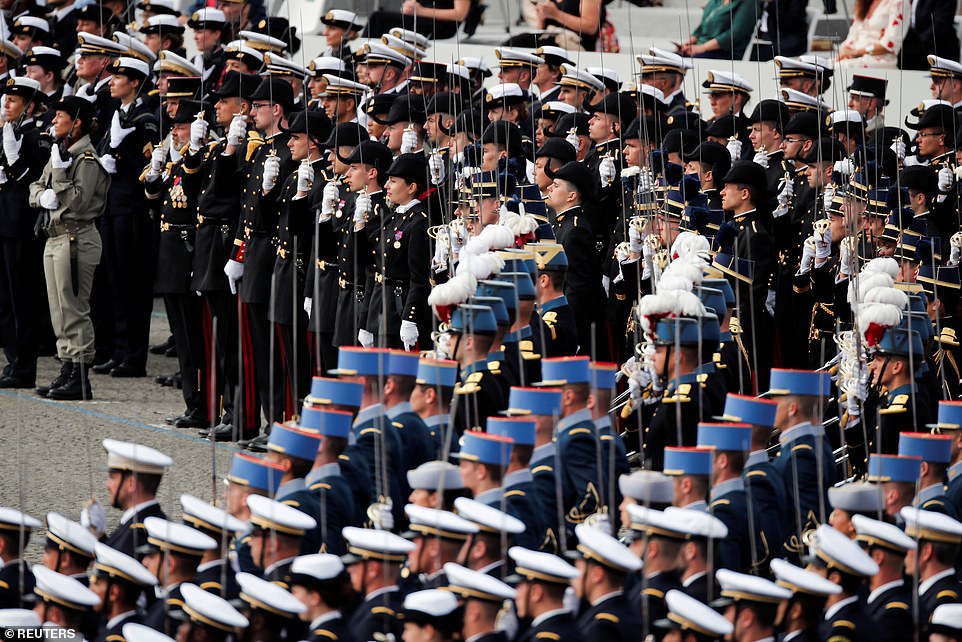 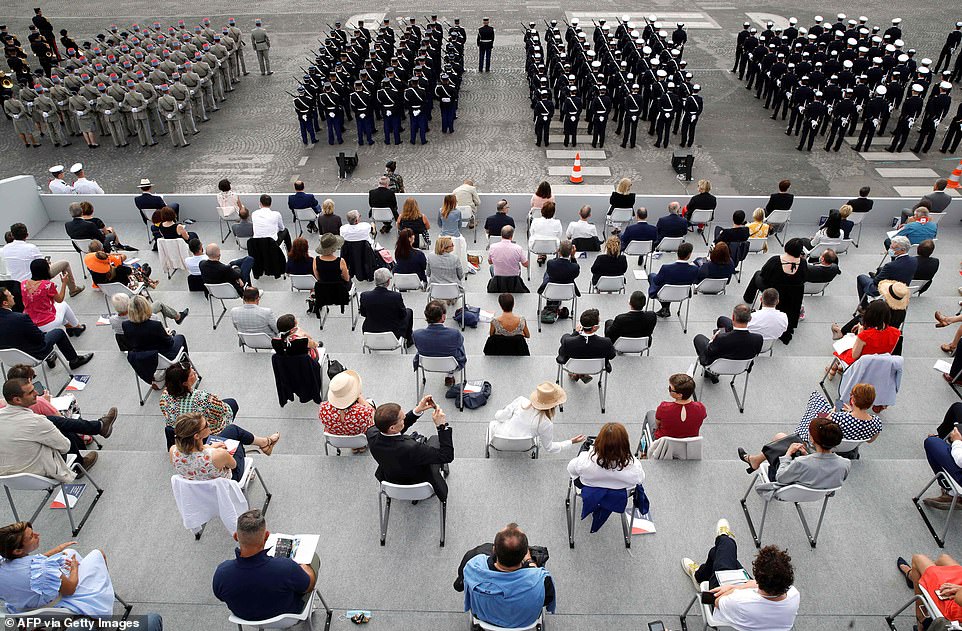 The number of guests were limited to 2,500 – with crowds required to sit in chairs placed at intervals to ensure social distancing 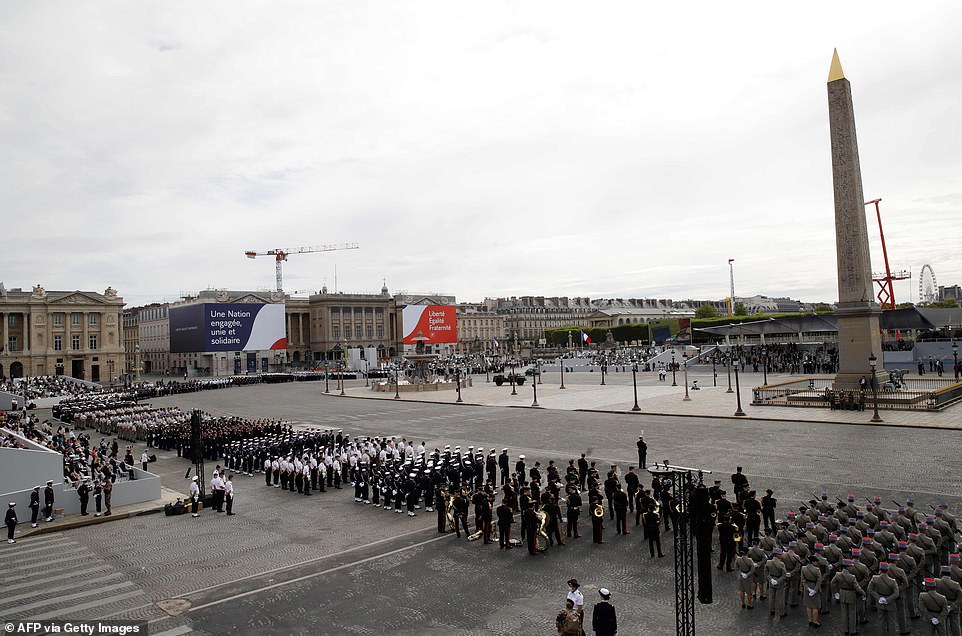 The parade took place in Place de la Concorde, Paris’s largest public square, and not on the Champs Elysee for the first time since 1945 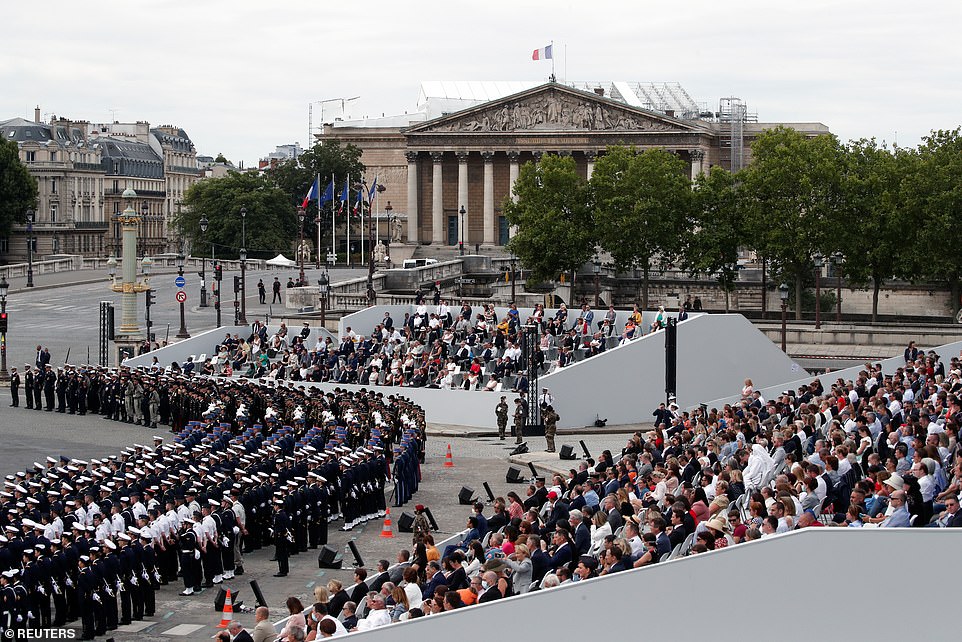 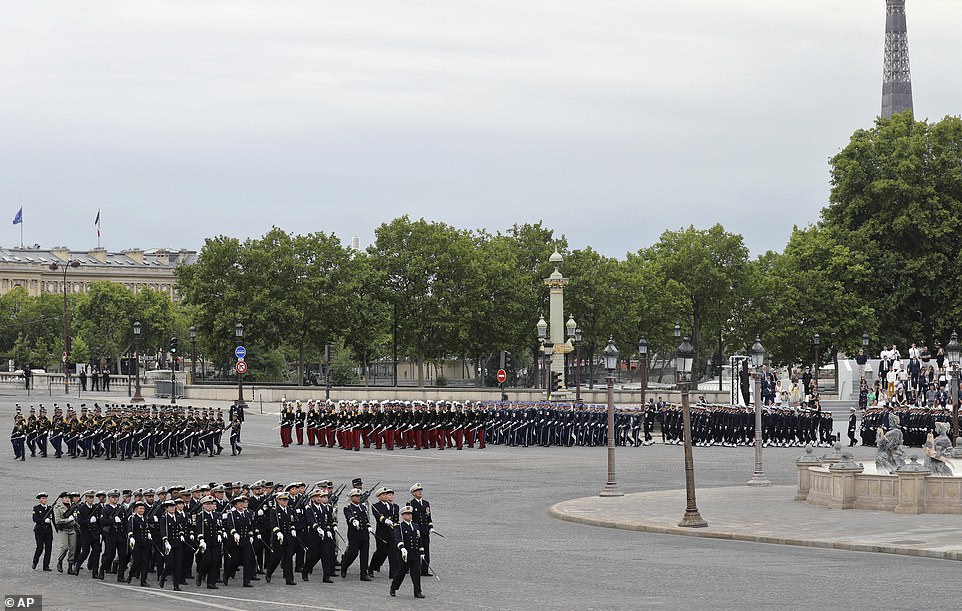 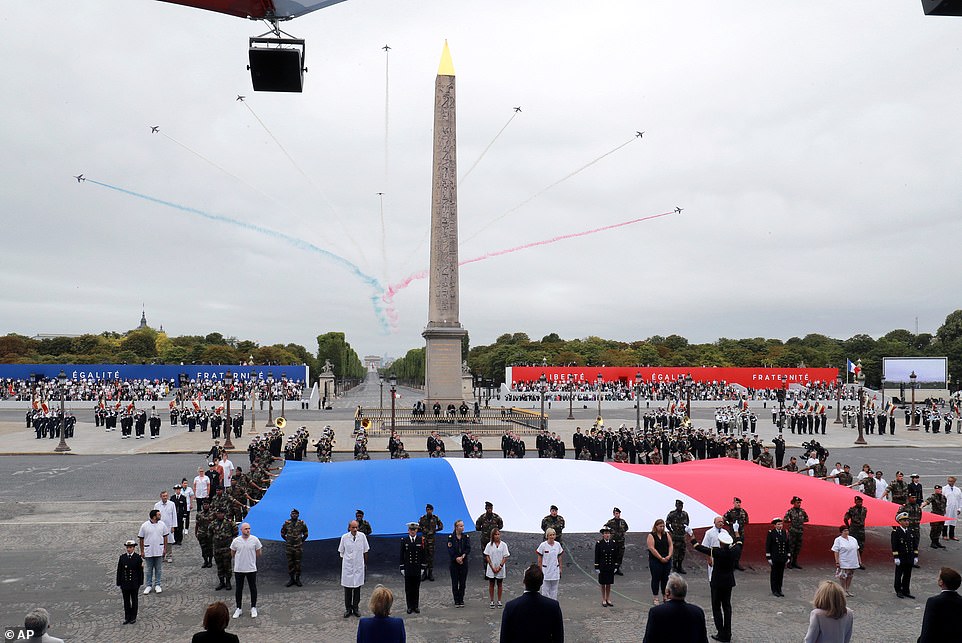 The move comes after two months of negotiations that were launched by Emmanuel Macron amid protests over his handling of the crisis.

It is likely to increase calls for other hard-hit European countries – such as the UK, Spain and Italy – to follow suit.

Health workers were regularly honoured during France’s first wave of coronavirus with people applauding their efforts from their doorsteps.

But medics demanded concrete reward for their sacrifice, and took to the streets demanding investment after years of cuts to the health system.

The demonstrations sometimes descended into rioting amid fears they were being hijakced by Antifa, with police using tear gas and baton charges.

But on Tuesday negotiations yielded a deal that a majority of unions have now signed up to.

New French Prime Minister Jean Castex hailed the deal as an ‘historic moment for our health system’ at a signing ceremony on Monday.

‘This is first of all recognition of those who have been on the front line in the fight against this epidemic,’ he said.

‘It’s also a way of catching up the delay for each and every one – including perhaps myself – has their share of responsibility.’ 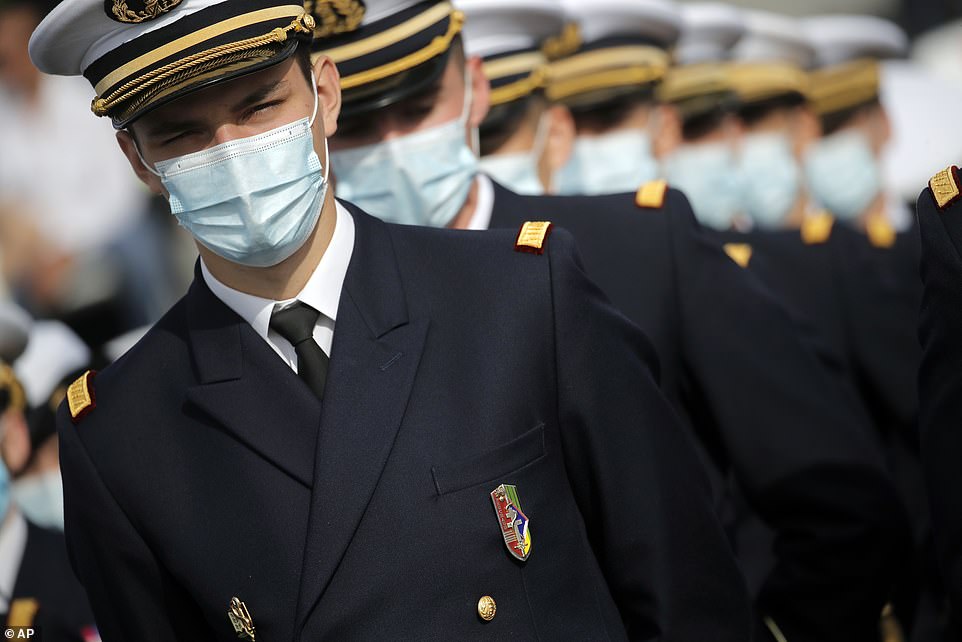 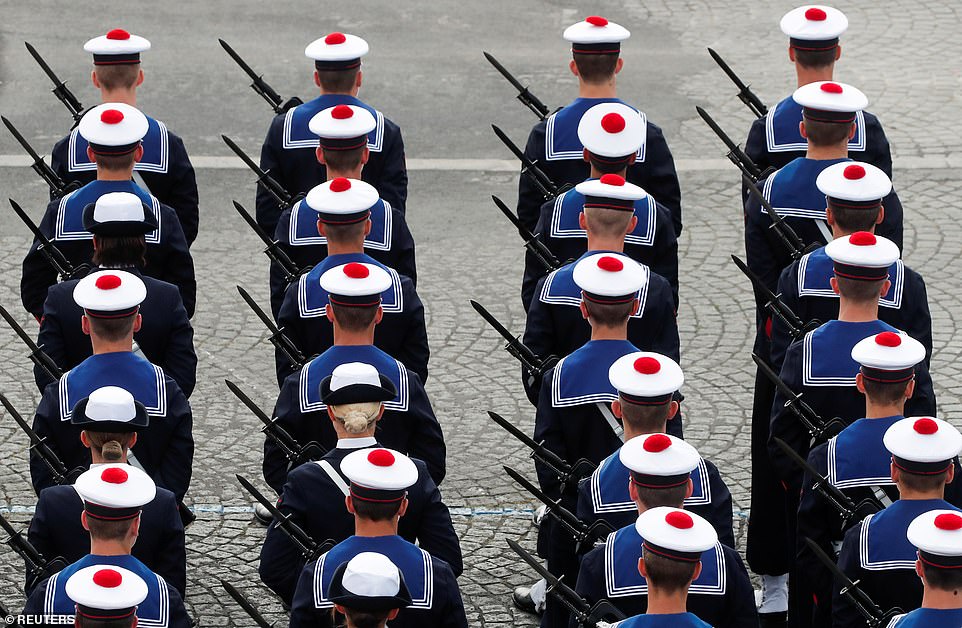 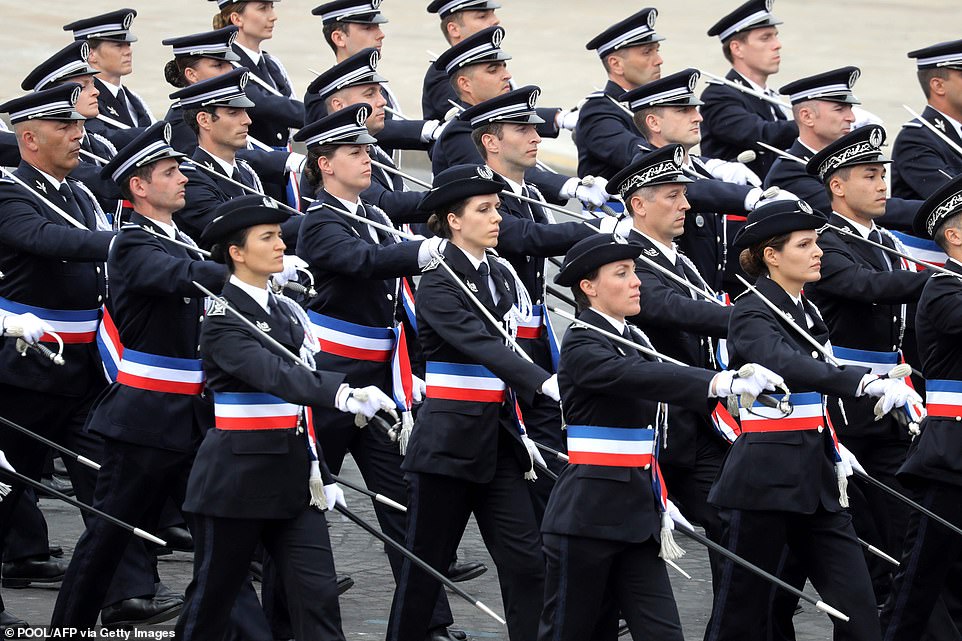 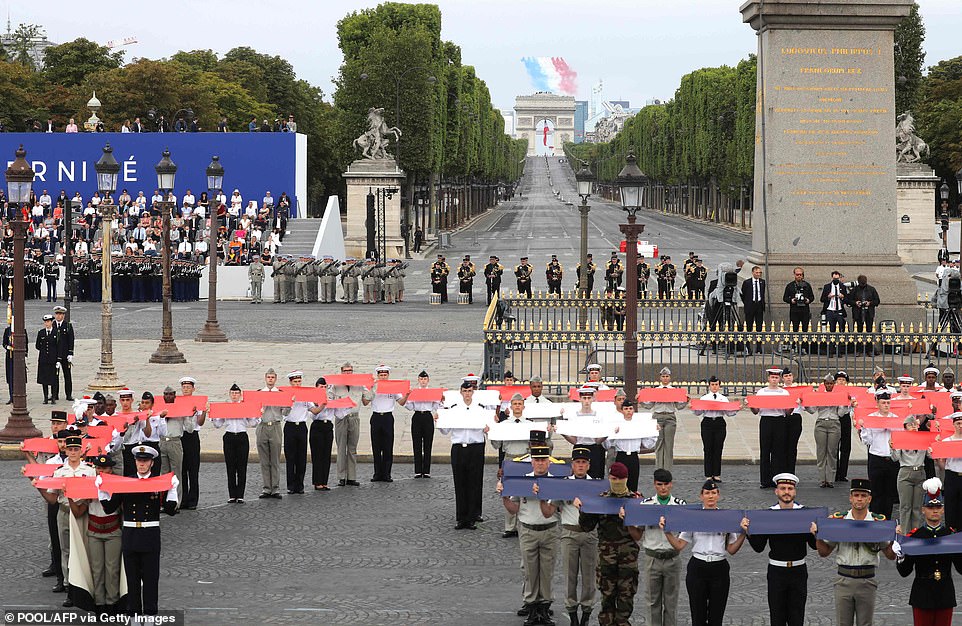 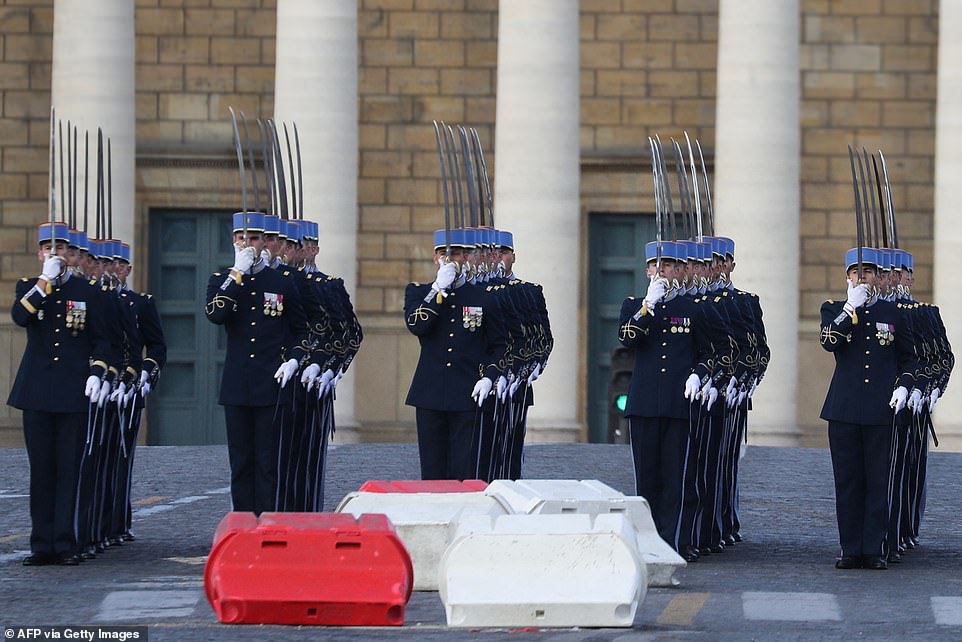 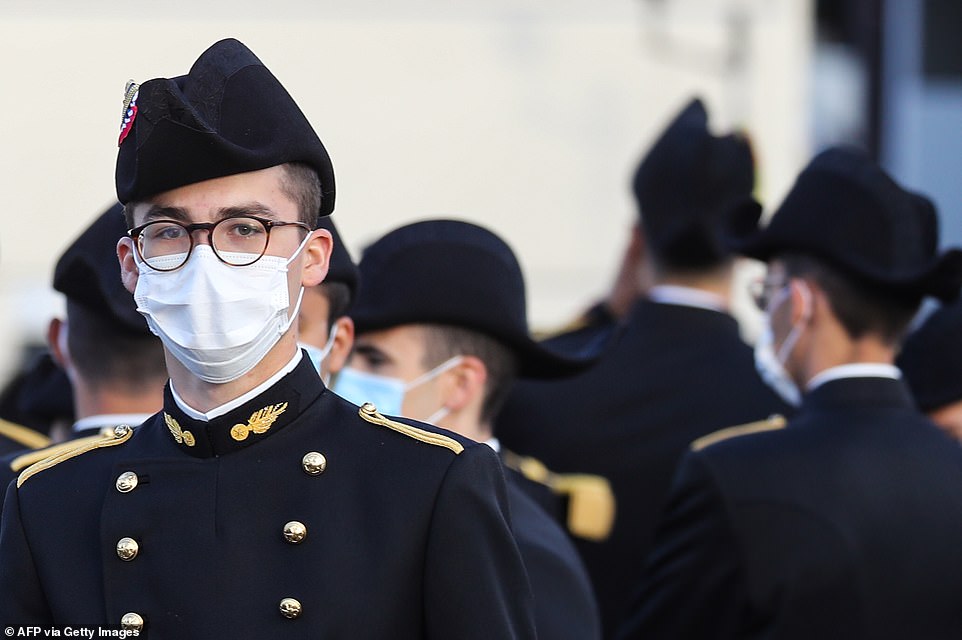