Emmanuel Macron flies to Russia for talks with Vladimir Putin

Russian president Vladimir Putin handed Brigitte Macron flowers after the arrival of his French counterpart Emmanuel Macron in St Petersburg at the start of crunch talks.

The two leaders are due to discuss the future of the Iranian nuclear accord, which has been thrown into jeopardy following Donald Trump’s decision to unilaterally pull out of the deal.

Macron is also due to raise the issue of Syria and Ukraine with Putin.

Vladimir Putin, left, showed Emmanuel Macron and his wife Brigitte the former residence of Peter the Great in St Peterburg ahead of talks between the two leaders earlier today 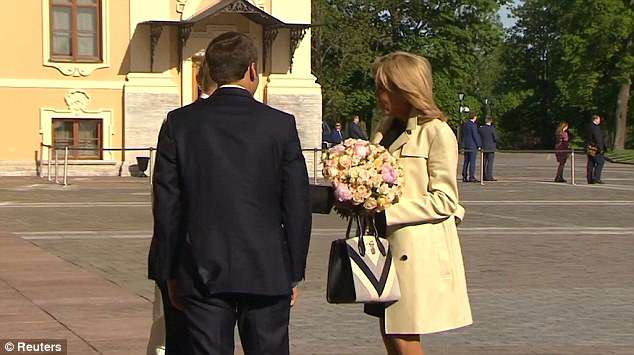 The trip is Macron’s first to Russia as president and follows a visit by German Chancellor Angela Merkel last week. Europe and Moscow are making diplomatic overtures to save the Iran deal, now under threat after the recent US withdrawal.

In a joint appearance before the start of the talks, Macron said: ‘I believe we must work together on joint initiatives.

Putin meanwhile said he was ready to talk ‘about key international issues, the resolution of which are important to both France and Russia’.

Putin handed Macron’s wife Brigitte flowers as he greeted the couple late in the afternoon at the Konstantin Palace, a former residence of Peter the Great set some 12 miles outside Saint Petersburg.

The meeting comes almost exactly a year since the freshly elected Macron hosted Putin in Versailles, when the French leader accused Russian media of producing ‘lying propaganda’ during a joint press conference.

The talks take place after US President Donald Trump in early May controversially pulled the United States out of the 2015 landmark pact with Iran that placed limits on its nuclear programme in return for easing economic sanctions. 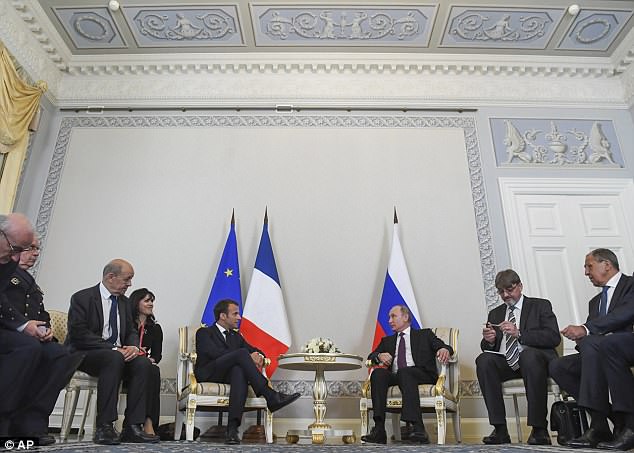 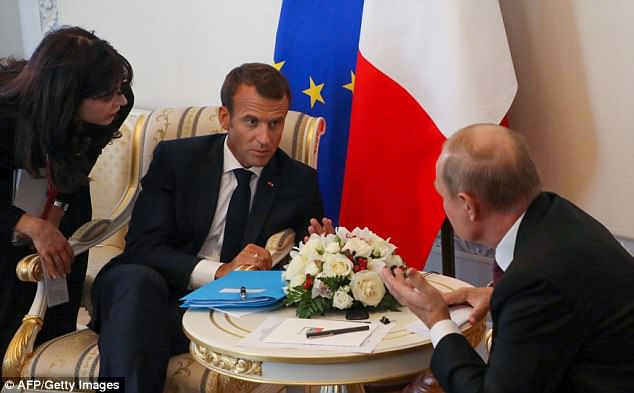 Saving the deal provides a rare point of agreement between Moscow and European countries, which have seen relations tank in recent years over crises in Ukraine and Syria, as well as accusations of meddling in foreign elections and the poisoning of an ex-Russian spy in Britain.

Alexander Baunov of the Carnegie Moscow Centre said talks over Iran will be positive. He said: ‘Russia shares the position of the majority of the international community including Western leaders.’

The West has realised that a dialogue with Putin is ‘inevitable’ in order to preserve the accord, he said.

Japanese Prime Minister Shinzo Abe will also visit Russia at the end of the week.

Baunov added: ‘Merkel and Abe have already begun a thaw with Moscow and Macron is scared of losing the advantage that France has always had with Russia.’

But there are a number of sticking points that will prevent a full rapprochement between Paris and Moscow.

Moscow intervened in 2015 to prop up its ally President Bashar al-Assad – in a move generally seen as decisive in turning around the multi-front conflict – while France has participated in strikes on regime targets.

Another issue is the conflict in eastern Ukraine, which broke out after Russia annexed Crimea in 2014 and has so far claimed at least 10,000 lives.

Paris and Moscow, along with Berlin, signed peace agreements in Minsk in 2015 that aimed to bring the fighting to a close but there is currently no end in sight.

International investigators on Thursday said a missile that downed a Malaysia Airlines flight over eastern Ukraine in 2014 belonged to a Russian brigade. Moscow rejected the accusation.

Before Macron’s trip, Human Rights Watch also implored him to raise the issue of rights abuses with his Russian counterpart, following a crackdown on dissent and pressure on minority groups in the country.

But the talks between the two presidents will not be the only bilateral activity of the day, as a raft of commercial agreements are also set to be signed during the economic forum.

The presence of the French president at the forum ‘legitimises visits by business people. Those who are worried about the risks, sanctions or criticism are covered to a certain extent by the president,’ analyst Baunov said.

‘If anything, the political leadership will get criticised for this rapprochement and not the business community.’