Emmanuel Macron has lost his absolute majority in the French parliament after seven defectors joined a new bloc to demand a more left-wing agenda.

Macron’s LREM party, which upended French politics after he founded it in 2016, now has only 288 out of 577 seats in the National Assembly – one short of a majority.

Seven LREM members are joining the new Ecology, Democracy, Solidarity (EDS) faction along with ten MPs from other parties.

Macron’s foreign minister Jean-Yves Le Drian today called the defections ‘a pity’ but said the government would still be backed by other centrist MPs.

French president Emmanuel Macron, pictured during a press conference with Angela Merkel yesterday, has lost his majority in the National Assembly

LREM won 314 seats at the 2017 election after Macron took the presidency weeks earlier, but has suffered a string of defections in recent months.

Parliamentarians have grown frustrated with Macron over his tight grip on decision-making and his pro-business policies.

The French president is elected separately from the National Assembly, meaning that Macron does not need parliamentary backing to survive as British PMs do.

But an anti-Macron majority in parliament could frustrate his agenda, which has already stalled because of the coronavirus pandemic.

Macron had been trying to regain momentum for his reform agenda after weeks of pension strikes and months of ‘yellow vest’ protests before that.

LREM is still supported by the centrist MoDem party, which may now have more leverage over government policies.

‘I think it’s a pity,’ he told French television, while adding that MoDem and others would still support the president.

Richard Ferrand, the president of the National Assembly and a Macron ally, said the government could still count on 342 votes in the lower house.

The new EDS group does not have the formal structures of a party, but its members are likely to be ejected from Macron’s LREM.

The group will be chaired by Paula Forteza and Matthieu Orphelin, a close ally of former environment minister Nicolas Hulot who quit Macron’s government in frustration at the president’s policies. 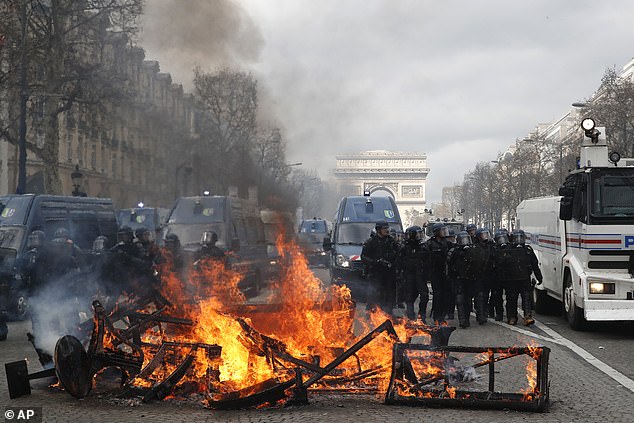 Some local elections have been postponed this year because of the pandemic, including the second round of the Paris mayoral election.

Incumbent socialist mayor Anne Hidalgo had won the first round, with Macron’s candidate in third.

Macron is up for re-election in 2022, five years after ousting France’s traditional parties and thrashing the far-right Marine Le Pen to win the presidency in 2017.

His approval ratings slumped as low as 18 per cent during the angry ‘yellow vest’ protests which reached their height in late 2018 and 2019.

Macron has recovered some ground since then and his ratings have improved somewhat during the coronavirus crisis.

A handful of polls have suggested that Macron would win again in a rematch with Le Pen in 2022, although by a smaller margin than before.

The National Assembly will also be up for election in 2022, meaning that LREM will have to fight for a new majority even if Macron retains the presidency.

French presidents have sometimes had to work with prime ministers of opposing parties, including Jacques Chirac who did so from 1997-2002.