Emmanuel Macron put Britain and the EU on a collision course today as he insisted the Irish backstop is ‘indispensable’ while Boris Johnson warned the French president that the UK will leave the bloc with or without a deal on October 31.

The pair met in Paris this lunchtime for showdown talks after Angela Merkel told Mr Johnson in Berlin yesterday that the UK had 30 days to come up with alternatives to the border protocol.

But while the German chancellor’s comments represented a boost to Downing Street, Mr Macron appeared to dash hopes of a breakthrough as he suggested he would not allow the terms of Britain’s divorce from the EU to be renegotiated.

Mr Macron said: ‘My position has always been to respect the sovereign choice made by the British people.

‘I regret it but I respect democracy. The key elements of the Withdrawal Agreement – including the backstop – are not just technical, they are indispensable guarantees.’

Mr Johnson insisted his preference is for the EU and UK to strike a deal but he made plain that he is ready to quit the bloc without an agreement.

He urged Mr Macron to help him ‘get Brexit done’ as he added: ‘Let’s not wait until October, let”s get on now.’

Mr Macron had set the stage for a frosty meeting between the pair after he told reporters yesterday that renegotiating the Withdrawal Agreement struck with Theresa May was ‘not an option that exists’.

He also took aim at the idea that a post-Brexit trade deal between the UK and the US would be enough to offset the damage done to the British economy by a No Deal Brexit.

The combination of Mr Macron’s comments with those made by Ms Merkel suggest that a deal between the Britain and Brussels remains a long way off.

The EU will be deeply sceptical that the UK will be able to come up with alternatives to the backstop which are strong enough to ditch the insurance policy which was designed to ensure there is not a return to a hard border on the island of Ireland in the event no agreement is reached on future trading terms. 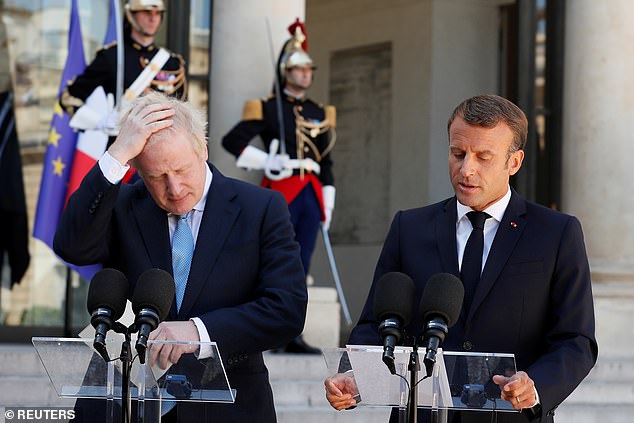 The pair addressed the media before a working lunch. Mr Macron appeared to rule out deleting the backstop as he described it as ‘indispensable’ 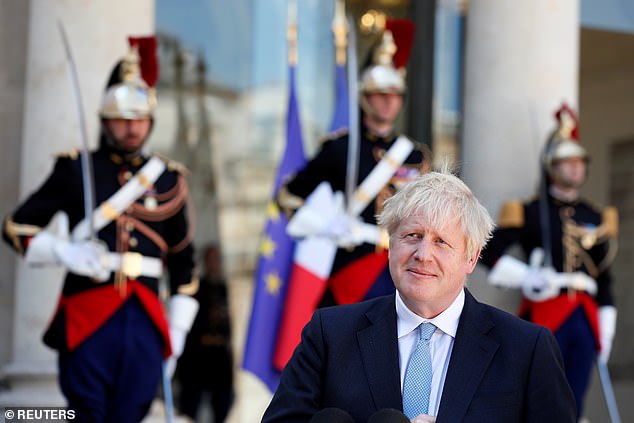 Mr Johnson has repeatedly vowed to take the UK out of the EU ‘do or die’ by October 31 and with or without a deal.

Today he explained his position to Mr Macron but he will be braced for a combative lunch with the French president who yesterday spent two and a half hours talking to reporters, spelling out his opposition to reopening the Withdrawal Agreement.

Mr Macron told them: ‘Renegotiation of the terms currently proposed by the British is not an option that exists, and that has always been made clear by President [Donald] Tusk.’

Mr Macron also rubbished the idea that a US trade deal could save the UK in the event of a No Deal split and suggested an accord with Mr Trump would leave Britain humiliated.

He said: ‘Can [the cost of a hard Brexit] be offset by the United States of America? No. And even if it were a strategic choice, it would be at the cost of a historic vassalisation of Britain.

‘The British are attached to being a great power, a member of the Security Council.

‘The point can’t be to exit Europe and say “we’ll be stronger” before, in the end, becoming the junior partner of the United States, which are acting more and more hegemonically.’

The difficulty facing Mr Johnson in Paris today was also illustrated by comments made by a French presidential aide yesterday who said No Deal was now viewed as the most likely outcome.

The aide also insisted the UK will pay all of the £39 billion Brexit divorce bill even if it quits the bloc without an agreement.

‘The scenario that is becoming the most likely is one of No Deal,’ the official said.

‘The idea of saying “there’s not a deal, so I won’t pay” does not work. We cannot imagine that a country like the UK would back out of an international commitment.”

The official added: ‘There’s no magic wand that makes this bill disappear.’ 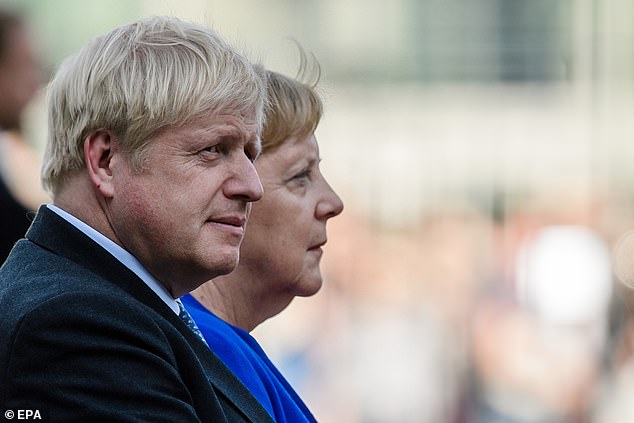 Mr Johnson, pictured alongside Ms Merkel in Berlin last night, was given an unexpected boost after the German chancellor suggested she was open to listening to backstop alternatives 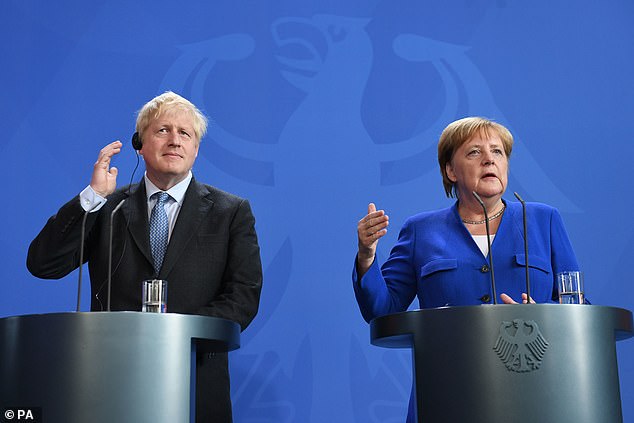 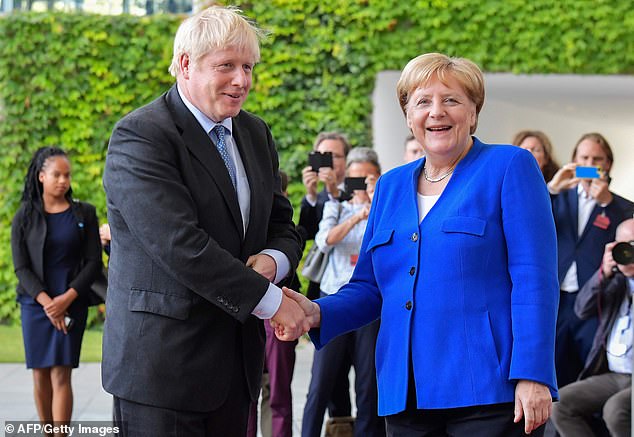 Mr Johnson welcomed her 30 day timetable as he told the German chanceller: ‘I am more than happy with that’

Ms Merkel raised hopes of a Brexit resolution last night as she addressed the media in Berlin alongside Mr Johnson before a working dinner.

She said the backstop had always been a ‘fallback position’ and would only come into effect if no other solution could be agreed that would protect the ‘integrity of the single market’.

‘Then we are one step further in the right direction and we have to obviously put our all into this.’

Mr Johnson said the ‘onus is on us’ to produce solutions for the Northern Irish border issue and he welcomed the ‘blistering timetable of 30 days’ proposed by Ms Merkel in which to come up with the answers.

He added: ‘I think what we need to do is remove it whole and entire – the backstop – and then work, as Chancellor Merkel says, on the alternative arrangements.

‘There are abundant solutions which are proffered, which have already been discussed. I don’t think, to be fair, they have so far been very actively proposed over the last three years by the British Government.

‘You (Mrs Merkel) rightly say the onus is on us to produce those solutions, those ideas, to show how we can address the issue of the Northern Irish border and that is what we want to do.

‘I must say I am very glad listening to you tonight Angela to hear that at least the conversations that matter can now properly begin.

‘You have set a very blistering timetable of 30 days – if I understood you correctly, I am more than happy with that.’

Ms Merkel said she wanted to ‘continue to have very close relations between the UK and the EU’ once Britain has left the bloc and that her preference was for a deal to be done before October 31.

But speaking about the prospect of a No Deal split, she said: ‘We are prepared for it.

Despite the boost, Number 10 greeted Ms Merkel’s words with caution with one official telling Politico: ‘Whitehall has put far too much hope in Merkel for a decade and we have no illusions.’

Norbert Rottgen, chairman of the German parliament’s Foreign Affairs Committee, responded to Ms Merkel’s timetable by saying it was ‘not realistic’ to expect an alternative solution to the backstop to be found in the next 30 days.

He told Channel 4: ‘I can only state the reality that so far and since years now, nobody has found a solution so far.

Mr Johnson had used his opening remarks to initially try to charm Ms Merkel as he said it was ‘obvious’ that his first foreign trip as PM should be to Germany.

But he then struck a tough tone as he said he wanted to be ‘absolutely clear’ about what needed to happen to allow the UK and EU to strike an agreement.

He said: ‘We in the UK want a deal. We seek a deal and I believe we can get one.

‘But clearly we cannot accept the current Withdrawal Agreement, arrangements that either divide the UK or lock us into the regulatory and trading arrangements of the EU without the UK having any say on those matters.

‘We do need that backstop removed. If we can do that I am absolutely certain we can move forward together.’

Despite Ms Merkel’s comments on the backstop she insisted that it would still be for the EU as a bloc to negotiate the way forward from a ‘uniform, consistent position’.

As Ms Merkel and Mr Macron appeared to strike different positions on whether the backstop could be changed, the EU and UK became embroiled in a war of words. 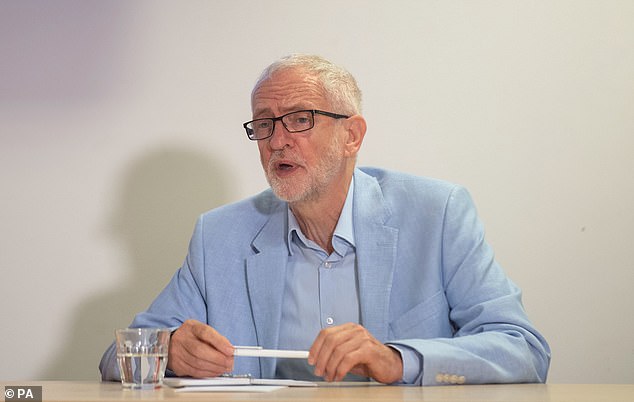 Phil Hogan, the Irish EU Commissioner, reportedly slammed Mr Johnson as an ‘unelected prime minister’ and claimed the PM was nothing like his political hero Winston Churchill.

He was quoted in The Times as saying that Mr Johnson viewed himself as a ‘modern-day Churchill’ but ‘in the event of a No Deal Brexit, the UK government’s only Churchillian legacy will be: never have so few done so much damage to so many’.

A UK government source hit back and said: ‘Deliberate personal attacks like this are just the kind of negotiation ploys that led to the failure to secure a deal last time.

‘The commission should stop playing these kind of games and instead work towards changes that could make a deal possible.’

It came as Jeremy Corbyn made a fresh move to try to stitch together an anti-No Deal coalition in the House of Commons.

The Labour leader wrote to senior MPs from all parties yesterday afternoon to invite them to sit down with him on Tuesday next week.

He said in the letter: ‘The chaos and dislocation of Boris Johnson’s No Deal Brexit is real and threatening, as the government’s leaked Operation Yellowhammer dossier makes crystal clear. That’s why we must do everything we can to stop it.’