Emmanuel Macron slams Brexit and says the Leave campaign was based on ‘lies, exaggerations and simplifications’ but admits it is an ‘historic alarm signal’ for EU

Emmanuel Macron has fired a parting shot at Leavers whose ‘lies, exaggerations and simplifications’ he claims muddied the 2016 Brexit campaign.

As the UK prepares to formally leave the bloc’s institutions at 11pm tonight, the French President mourned the ‘sad day’.

He said Britain’s historic divorce should send alarm bells ringing around Brussels, which he conceded had to evolve to stop more countries peeling away.

But the staunch Europhile’s conciliatory tone was soured by a blistering attack on the referendum campaign, which he said drove voters to scapegoat the EU for their own domestic woes.

In a televised address, Macron said: ‘At midnight, for the first time in 70 years, a country will leave the European Union.

‘It is a historic alarm signal that must be heard in each of our countries.’

He added: ‘Europe can only advance if we reform in depth, to make it more sovereign, more democratic, closer to our citizens’ so that ‘the desire to leave Europe will never again be the response to difficulties today.’

That sovereignty and democracy had ebbed away during the 45 years of Britain’s membership were flagship claims of the Vote Leave side in 2016.

Yet the French President tonight scolded the architects of Brexit – of which Boris Johnson was a figurehead – for misleading the British electorate.

He said: ‘The Brexit campaign in 2016 was made up of lies, exaggerations and simplifications. We must always remember what lies can lead to in our democracies.’

Speaking at the Elysée Palace in the French capital, Macron also banged the drum for ‘more Europe’.

He told Britons to confront the cold reality they will no longer boast the same rights in the EU as they currently have.

Macron said: ‘We cannot be both inside and outside. The British people have chosen to leave the European Union.

‘They will no longer have the same duties and therefore no longer the same rights.’

The French premier, who will be a central player in the forthcoming trade negotiations between the EU and the UK, vowed to visit Britain soon to cement the two countries’ bilateral relationship.

He said: ‘Between France and the United Kingdom there is a long history, founded on blood, freedom, courage, on battles that we have shared… 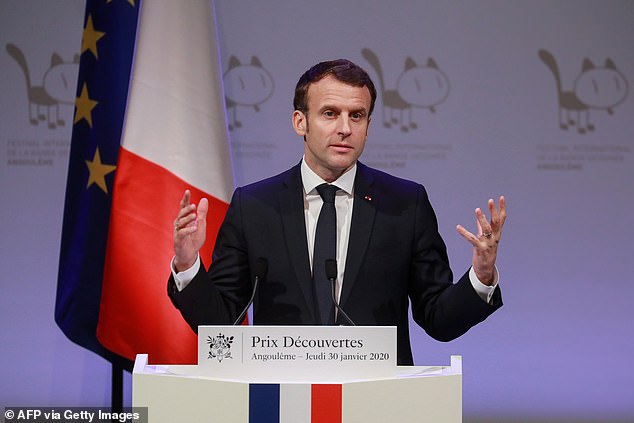 As the UK prepares to formally leave the bloc’s institutions at 11pm tonight, the French President (pictured yesterday) lamented the ‘sad day’

‘This is a sad day, there’s no hiding it. But it’s also a day which should prompt us to proceed in a different way.

‘To build with more determination a European Union that is powerful, effective, which you find more convincing and which rediscovers the historical path that makes this European Union a unique and, in my eyes, irreplaceable adventure.’

Along with his German counterpart Angela Merkel, Macron is a key power-broker in the bloc and has promised to fight for French interests in the post-Brexit wrangling during the 11-month transition phase.

In this evening’s speech broadcast from the Elysée Palace especially for Brexit Day, he said he would vehemently defend Paris’s interests in fisheries.

This tees up a spectacular showdown with Downing Street which has constantly said Brexit is an opportunity to take back control of the UK’s territorial waters.

Fishing is likely going to be a sticking point in the talks between Whitehall and Brussels trade experts over the coming months.