Emmanuel Macron’s party was thrown into crisis today after his candidate for mayor of Paris quit the race in a sex scandal.

Benjamin Griveaux withdrew his candidacy after an obscene video emerged showing the married father-of-two pleasuring himself while ‘sexting’ a young woman.

Explicit messages between the two have also been published and contrasted with Griveaux’s speeches about family values.

The 42-year-old politician, who is regarded as one of Macron’s closest allies, bemoaned ‘ignoble attacks endangering my private life’ as he quit the race today.

His withdrawal is an embarrassment for Macron who had lobbied for Griveaux to be his party’s candidate despite a groundswell of support for eccentric maths genius Cedric Villani.

It leaves Macron’s Republic on the Move (LREM) party without a candidate just 30 days before the first round of voting.

‘This decision will cost me, but my priorities are very clear – they are first of all my family.’

‘I do not want to expose us further, my family and I, when anything goes, it goes too far.’

Griveaux and his wife, Julia Minkowski, had given a number of interviews stressing his desire to become a ‘mayor for children and parents.’

In October he said: ‘When I told my wife that I intended to embark on the Parisian campaign, it was obviously with her support, otherwise it would not be possible.

‘I love her very much. I would not do what I do if she wasn’t there.’ 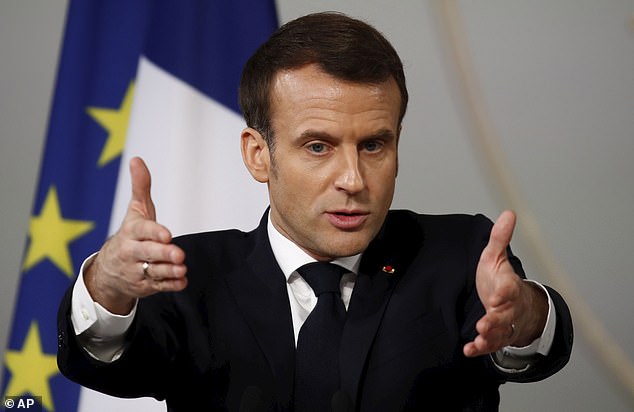 A presidential aide said Macron was ‘deeply disappointed’ by the news.

Villani was expelled from the party last year and is running as an independent.

Macron had tried to help Griveaux’s campaign last month by summoning Villani to the Elysee Palace and pleading with him to quit the race, but to no avail.

It is unclear whether LREM will now field a new candidate or be forced to back Villani in a humiliating climbdown.

Griveaux was one of the earliest members of Macron’s new party and was elected to France’s National Assembly in 2017.

He served several months as a junior finance minister later that year.

Parisians will go to the polls for the first round of voting on March 15, with current Socialist mayor Anne Hidalgo running for a second term.

The top two candidates will progress to a run-off in the second round of voting on March 22.

Opinion polls last year had suggested a tight race was on the cards between Hidalgo and Griveaux.