‘It’s a complete outrage’: Emmanuel Macron’s fury as memorial to 642 victims of a 1944 Nazi massacre is defaced with the word ‘liar’ as he vows to catch the perpetrators

French President Emmanuel Macron on Saturday vowed that everything would be done to find out who defaced a memorial for one of the worst single massacres in France by the Nazis during World War II.

Politicians from across the spectrum denounced the desecration of the main entrance sign for the memorial at Oradour-sur-Glane in central France, where 642 people were slaughtered on June 10, 1944 by a German SS division.

The word ‘martyr’ was crossed out in the sign with white paint.

A blue cover was placed over the sign on Saturday, but images on social media accounts indicated the word in French for ‘liar’ had been added next to it along with other slogans claiming to deny the massacre had taken place.

Graffiti tags are seen on the lettering at the entrance to Centre of Oradour sur Glane Memory, the village where German Waffen-SS troops massacred 642 of its inhabitants in June 1944, in Oradour-sur-Glane, west-central France on Saturday 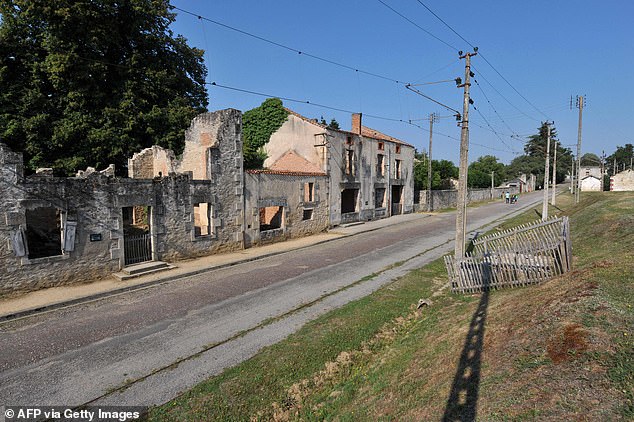 A file photo taken on August 30, 2013 shows the entrance of the martyr village of Oradour-sur-Glane, central France, where 642 citizens including 500 women and children were killed locked up in a church intentionally set on fire by a SS division on June 10, 1944 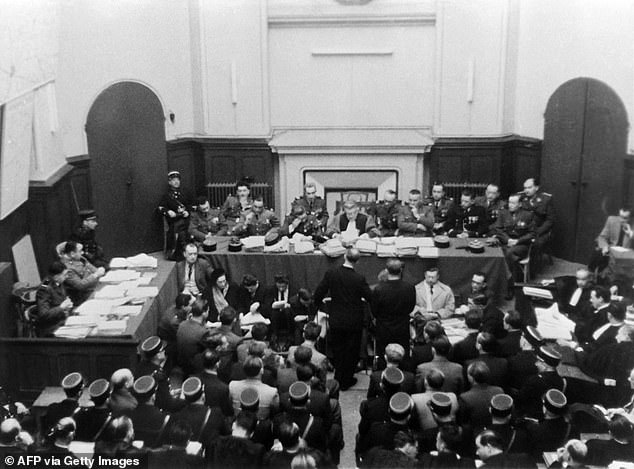 A file photo taken on January 12, 1953 shows French president of the military tribunal Marcel Nussy-Saint-Sans presiding over the court, in Bordeaux, as SS members enter the court to be tried for the charges of crimes against humanity for their role in the Oradour-sur-Glane massacre during the Second World War

The inscriptions were discovered on Friday morning when the memorial centre opened, its president Fabrice Escure told AFP.

‘It is a complete outrage,’ he said, adding that a legal complaint had already been filed and security cameras may be able to provide evidence.

On June 10, 1944, Nazi forces sealed off the village after reports a senior SS commander had been captured by the French resistance.

They grouped together all the men of the village in barns and shot them and then forced the women and children into a church which was set on fire.

After the war, resistance leader and later president Charles de Gaulle ordered that the village not be rebuilt but left in ruins as a reminder. A new village was built nearby.

The memorial centre, now visited by 300,000 every year, was later constructed to assist visitors.

‘Everything will be done to ensure that the authors of this are brought to justice,’ Macron said in a statement released by the Elysee Palace, adding that he condemned in the most vehement terms this ‘unspeakable’ act. 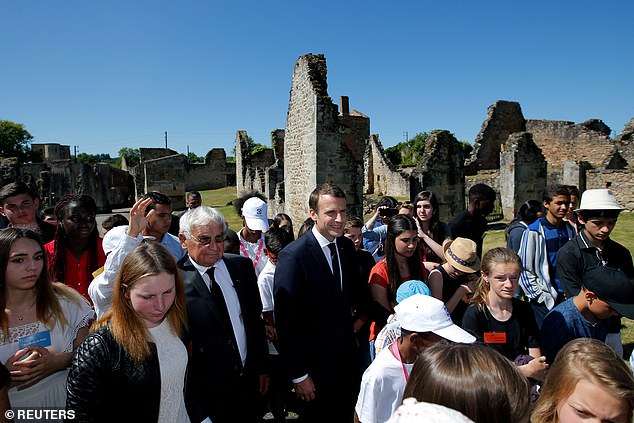 French President Emmanuel Macron attends a visit of the ruins in the French martyr village of Oradour-sur-Glane, France June 10, 2017

‘To violate this place of reflection is also to violate the memory of our martyrs,’ added Prime Minister Jean Castex.

The incident comes amid growing concern in France over remembering World War II, after repeated vandalisation attacks on Jewish cemeteries.

‘What shocks me is that we do not realise that children and women lost their lives in excruciating pain,’ Robert Hebras, 95, the last man still alive among half a dozen men from the village who survived the massacre.

‘What I fear is that everyone will now talk about Oradour for 48 hours and then that we stop and then we will forget,’ he told AFP.