Award shows give celebrities an opportunity to make their fashion mark on the red carpet while celebrating the achievements of themselves and their peers.

But, just as every award presentation ends in disappointment for at least a few famous names, so too does the red carpet serve as a forum for some serious fashion fails, and this year’s Emmy Awards were no exception.

While there were plenty of A-listers who hit a style high on the red carpet at the 71st Primetime Emmys, which were held on Sunday at the Microsoft Theater in Los Angeles, there were also a fair few big names who suffered serious sartorial slip-ups.

Not so mellow yellow: Big Little Lies star Kathryn Newton wore a garish two-piece ensemble that looked not unlike a Halloween costume 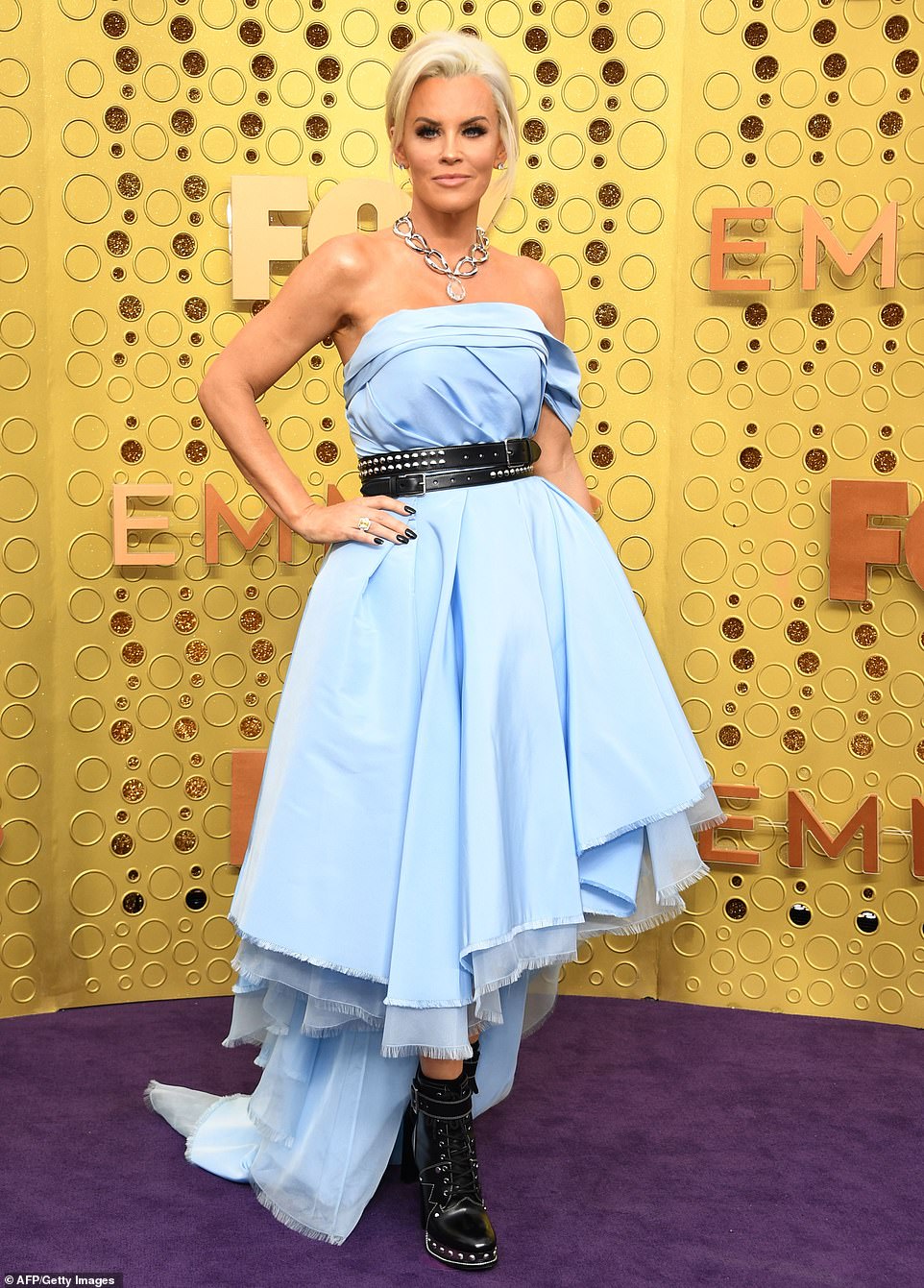 Throwback? Jenny McCarthy wore a punk rocker style ensemble that looked like it had been plucked out of the 90s, and came complete with a pair of chunky biker boots and a matching belt

First, Big Little Lies star Kathryn Newton, who broke with tradition by opting to wear a two-piece ensemble instead of a gown.

Sadly her originality didn’t result in a style win for the 22-year-old star, who looked slightly like she had chosen elements from a Halloween costume for her red carpet ensemble, with her brightly-colored waistcoat doing little to flatter her figure or her complexion.

Similarly, the multi-layered shiny skirt looked not unlike pieces of plastic being thrown around in the air as she swished the dress around her.

Then there was Jenny McCarthy, who appeared to have taken her fashion inspiration for the evening from the 90s, with the Sirius XM star wearing a punk rocker-esque ensemble that wouldn’t have been out of place in Avril Lavigne’s S8r Boi video. 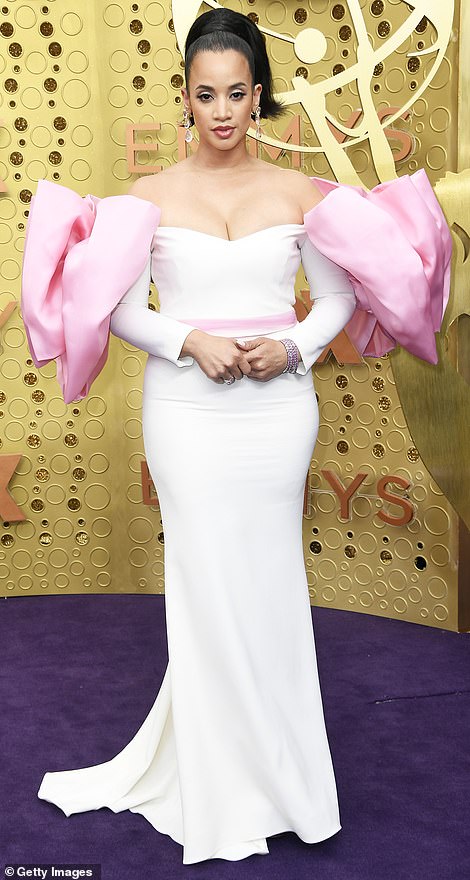 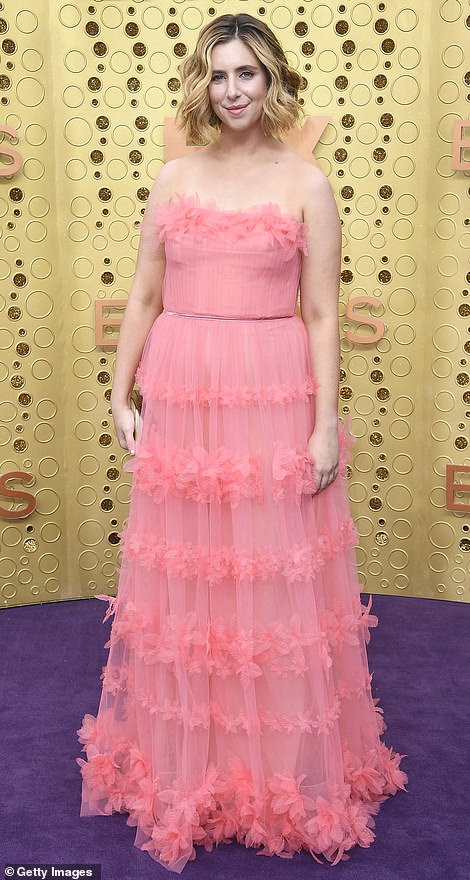 OTT: Dascha Polanco (left) and comedian Nicole Silverberg (right) missed the mark with their frothy pink numbers, with the wing-style embellishments on Orange Is the New Black star Dasha’s dress making it look as though she was about to take off 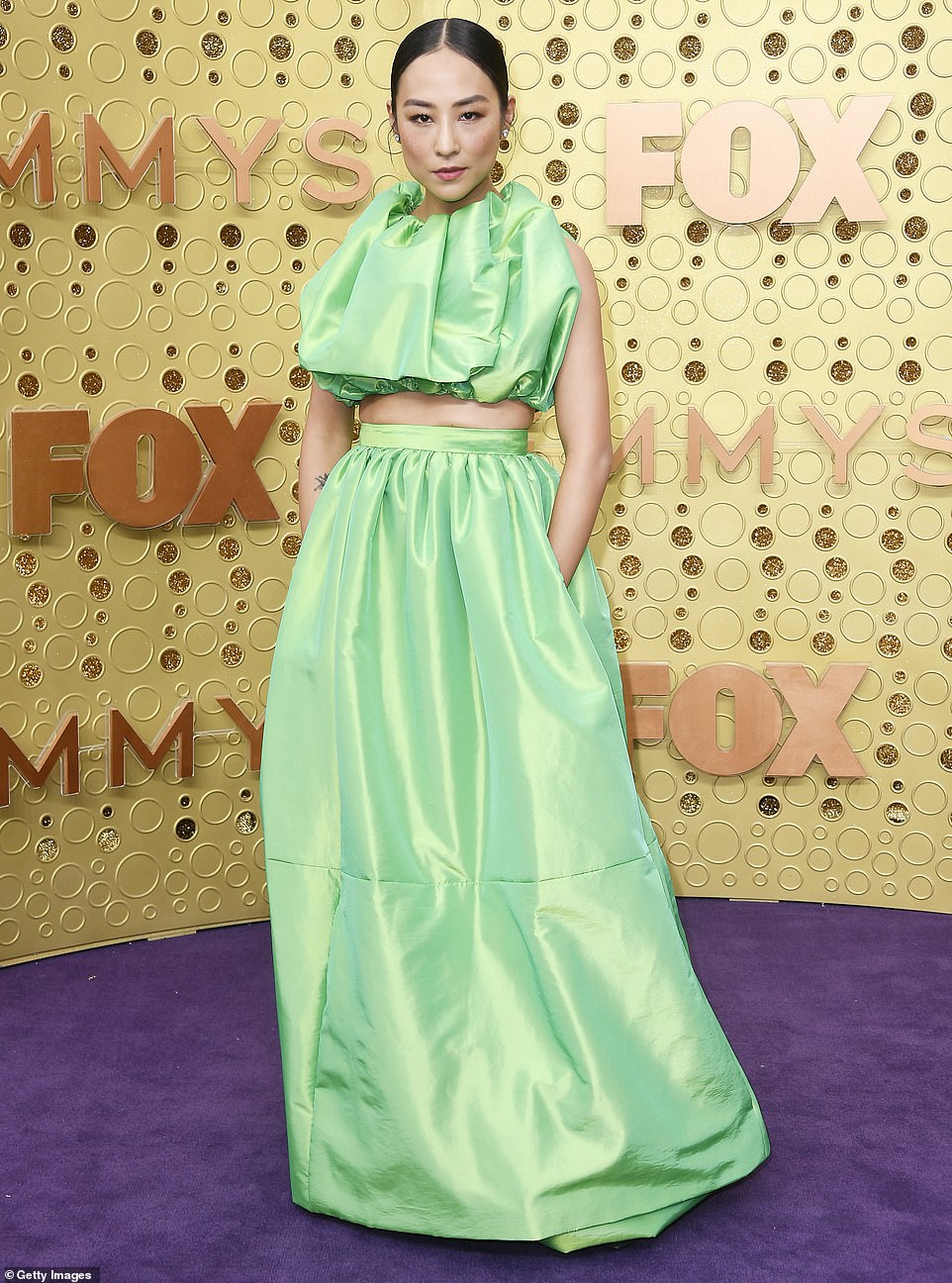 Mean green: Russian Doll star Greta Lee’s neon ensemble was a real eyesore, and did little to flatter her figure 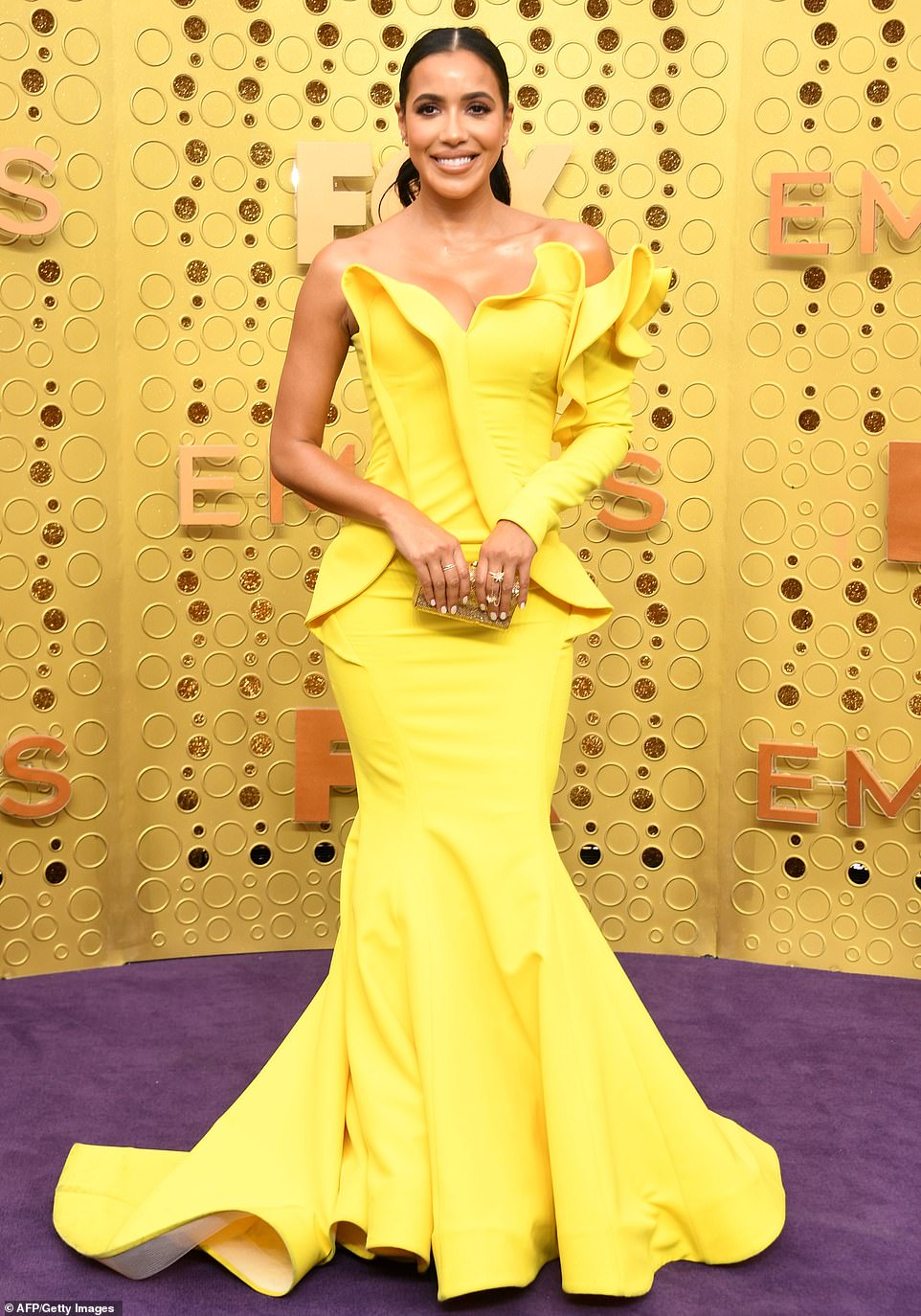 Sunshine daisies butter mellow… Julissa Bermudez’s was not only over-the-top in terms of its silhouette, the color was also almost too bright to look at

Oh dear: Sarah Sutherland’s pink two-piece looked like bad gift wrap (left), while Our Lady J’s silky number (right) would have been more suited to the loungers at a swimming pool than a red carpet 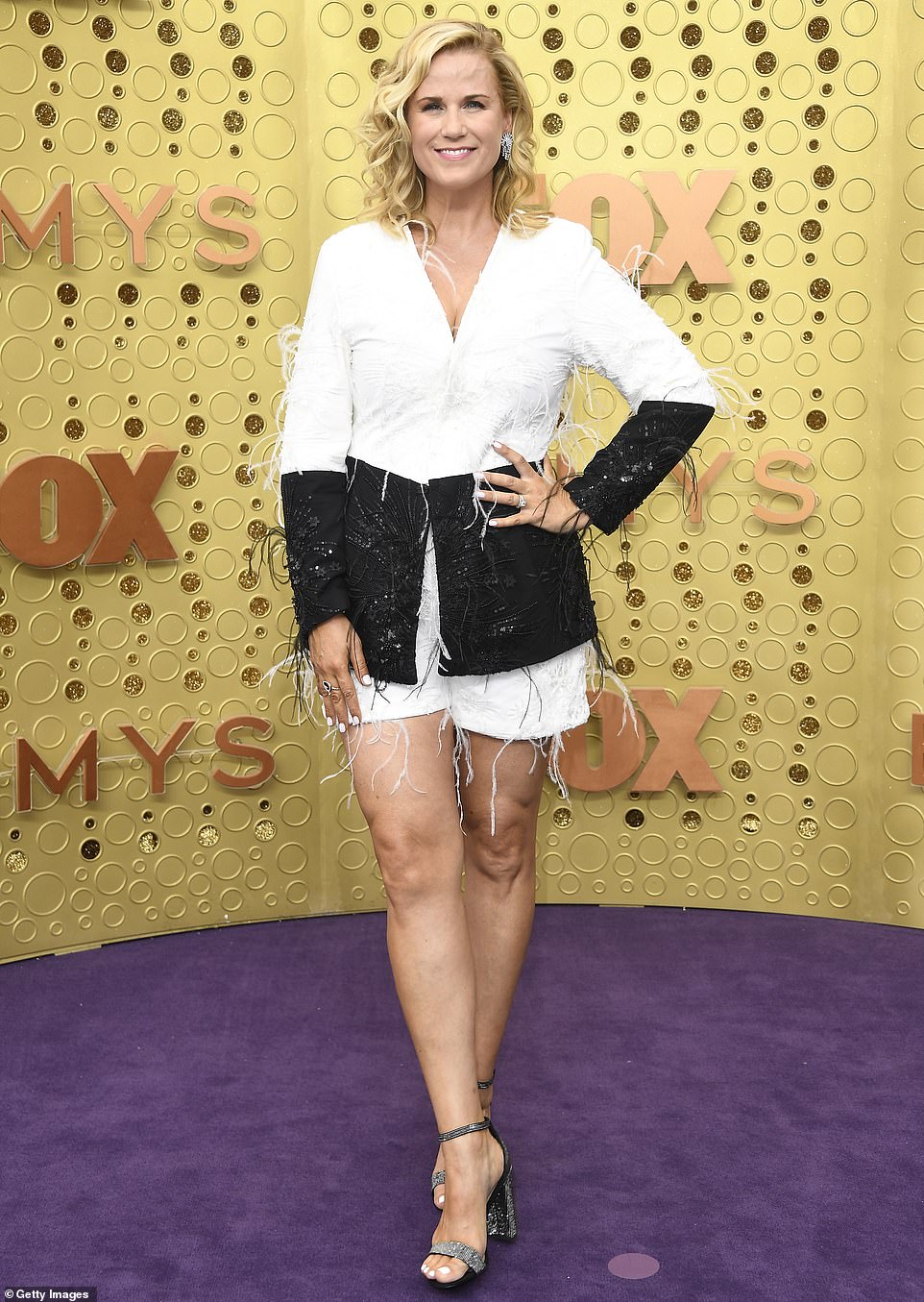 Monochrome misery: Comedian and actress Allana Harkin’s ensemble looked as though it was falling apart as she walked down the red carpet, thanks to the threads and feathers hanging from the jacket and shorts 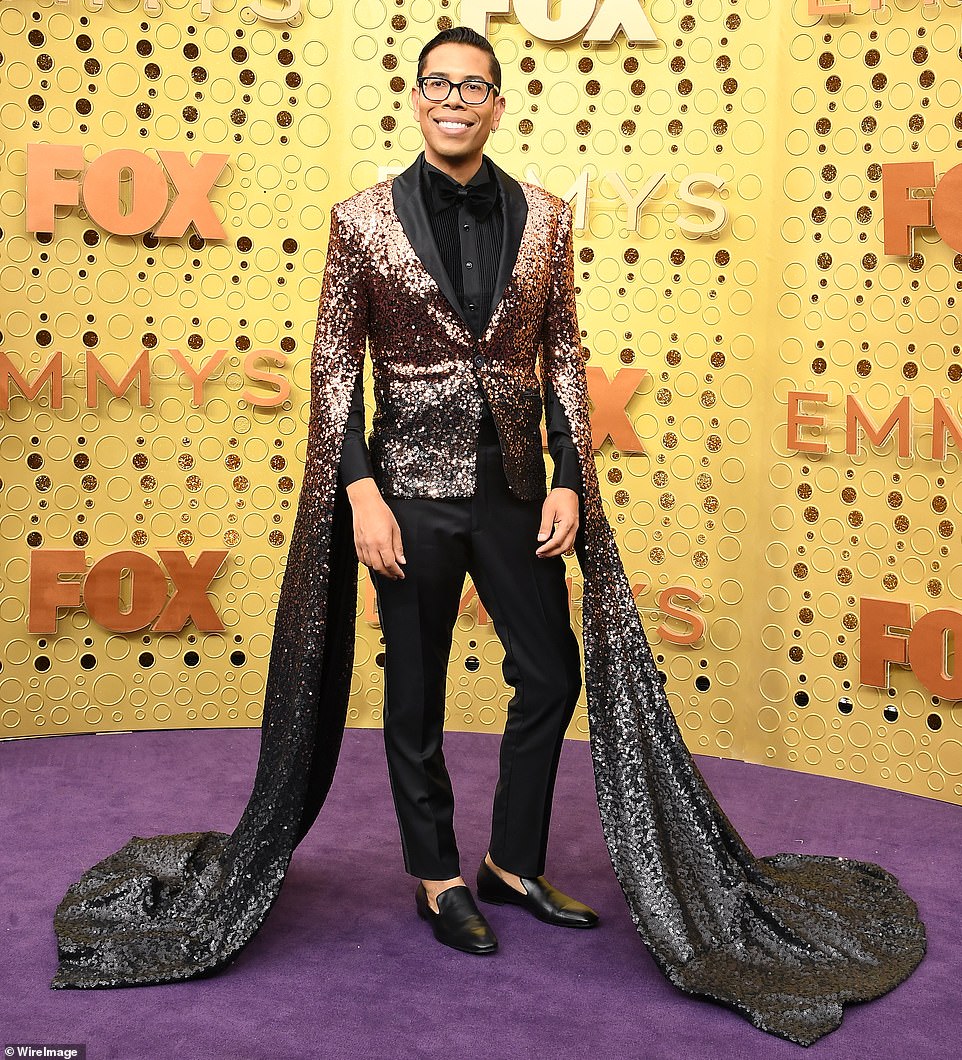 Up, up, and away! Writer and producer Steven Canals’s jacket had long sleeves that hung down on the floor and looked somewhat like glittering bat wings 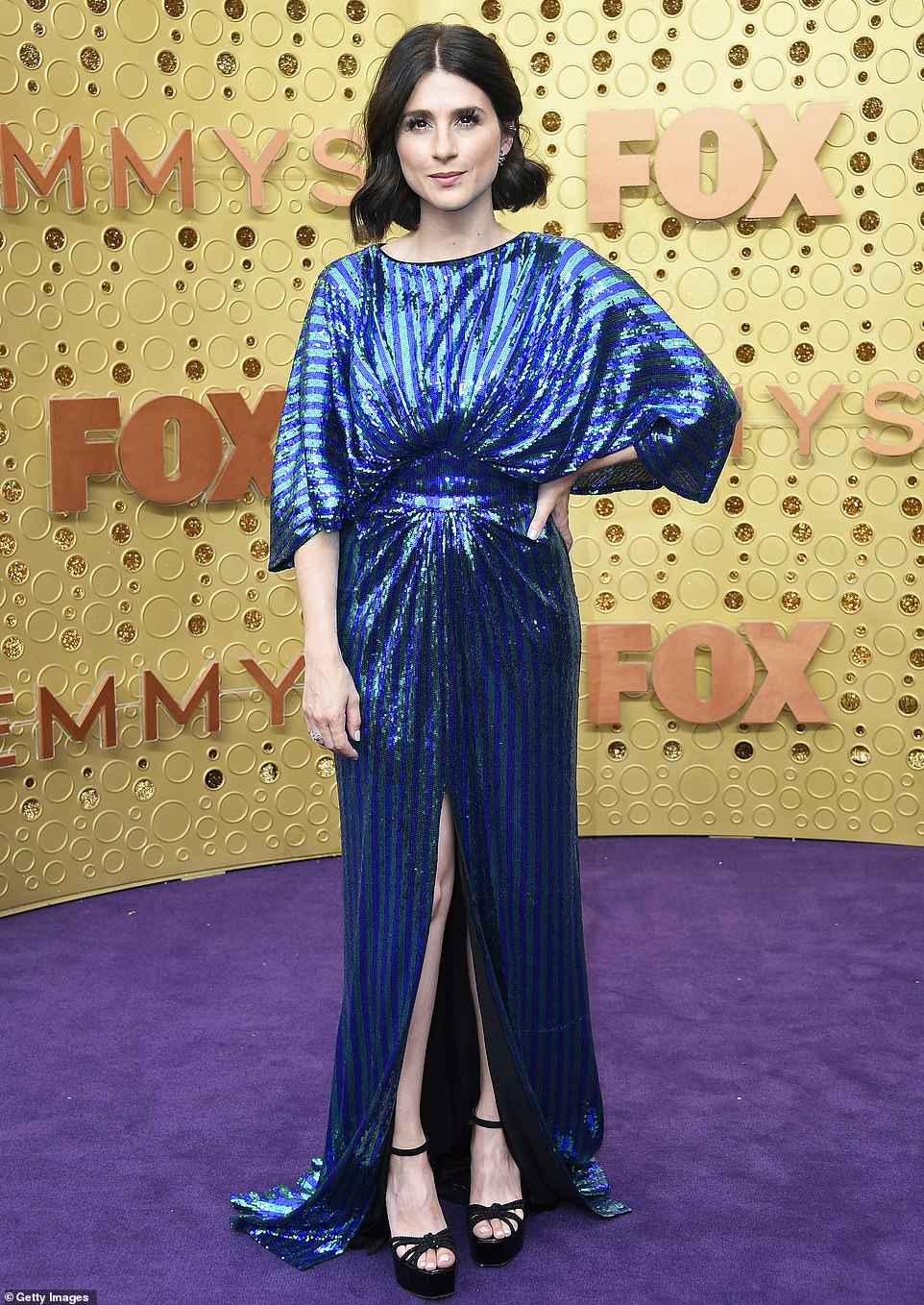 Roll up roll up! Fosse/Verdon star Aya Cash’s dress would not have been out of place in a clown’s closet