Two Australian women who suddenly developed Irish accents while recovering from different illnesses have burst into tears after finally meeting in real life.

Angie Yen and Kate Baggs have an extremely rare condition called Foreign Accent Syndrome, which is a brain disorder triggered by psychological or neurological damage.

Brisbane dentist Angie, 28, noticed she had a new twang when she woke up after getting her tonsils removed.

Kate, 31, who was born and raised in Darwin, began speaking in the foreign accent soon after suffering a rare form of migraine in 2019.

Both women have felt alone and frustrated after getting blasted by strangers online who continually berate them for ‘faking’ their accents for attention.

When they finally met in Sydney last week, they broke down and cried.

Pictured: Angie Yen (right) and Kate Baggs (left) smiling together after meeting for the first time

‘I’m so happy to see you,’ Angie said on 60 Minutes on Sunday, as she teared up on Kate’s shoulder.

Kate realised Angie was in floods of tears and replied: ‘There is. There is more of us, I promise. I really do promise.’

Both women were taken to neuroscience research clinic Neura to have their brains scanned for abnormalities.

In the language section of Angie’s brain, neuroscientist Dr Michael Shugrue found the neurons were firing abnormally which resulted in her otherwise unexplained Irish accent. 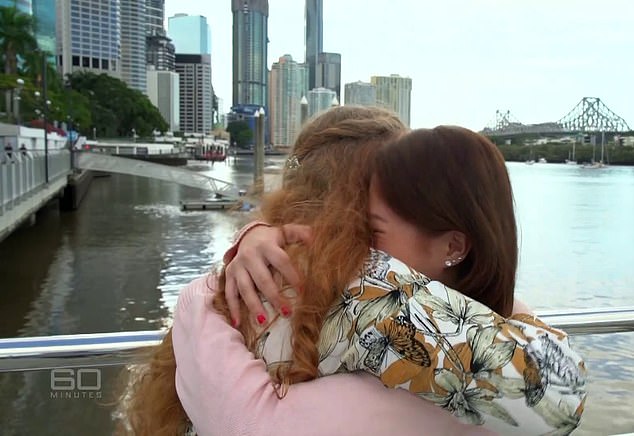 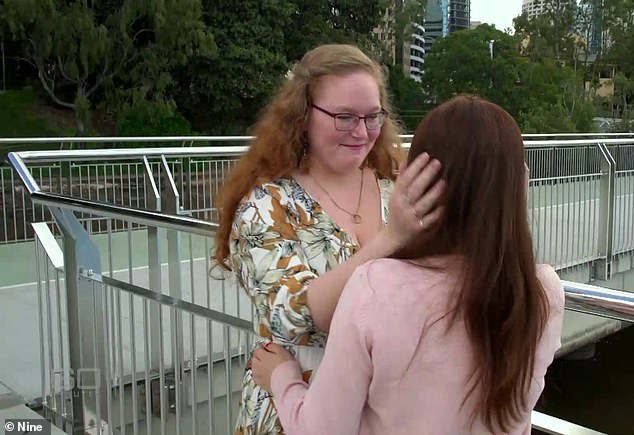 When Mr Shugrue said ‘we have objective proof that you’re not faking it,’ Angie broke down.

‘I feel relieved that I can show objective proof to people that I am not faking it,’ she cried.

The neuroscientist found similar patterns in Kate’s brain, but could not say whether they would ever regain their Australian accents.

Kate recalled her accent just ‘shifted’ in the middle of a sentence and said it was the ‘strangest feeling.’ 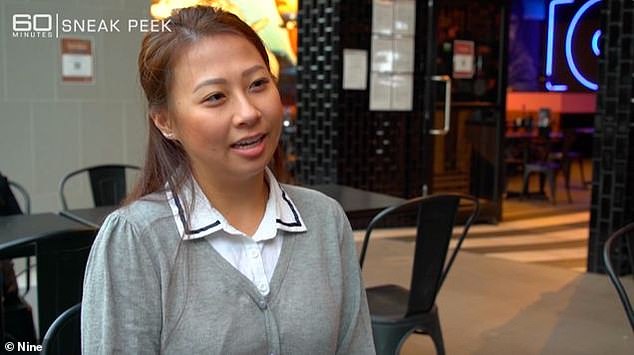 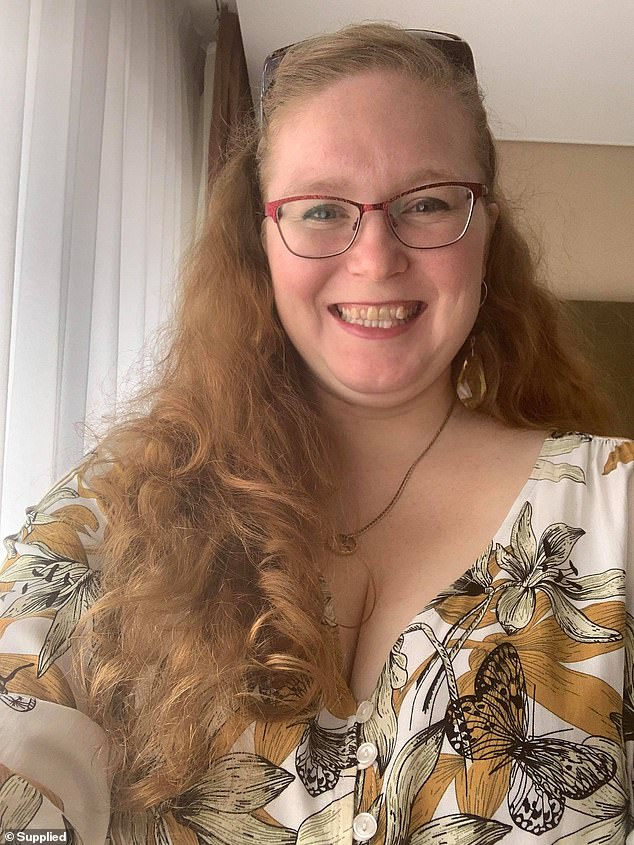 Kate Baggs (pictured) was raised in Darwin and has never been to Ireland, but has an Irish accent

Born in Taiwan but raised in Australia, Angie was the recent subject of ridicule online, with people on TikTok convinced the 28-year-old was ‘putting on’ the iconic Irish brogue for a few cheap laughs.

Turns out Angie is no budding comedian and, like her newfound friend Kate, suffers from the rare brain disorder.

‘I’m sick of being taken as a joke. It’s a very serious thing (condition).’

She labelled Foreign Accent Syndrome a ‘legitimate disorder’ which is triggered by psychological or neurological damage. 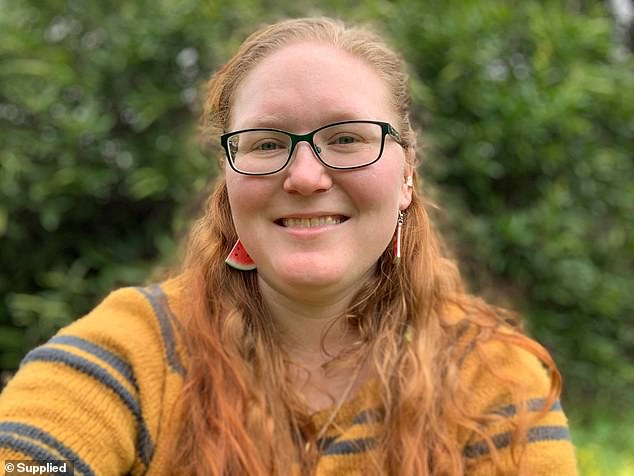 ‘It is usually caused by a brain disorder. This can be from head injury, stroke or surgery. It can also be related to diabetes, immune disorders or other unknown causes,’ he said.

‘It’s not a real foreign accent, but rather a damaged form of the person’s native language and accent.’

Dr Karl said the disorder can be fixed through speech training, potentially through an acting school or a speech pathologist.

Angie, who documented her transformation on TikTok over two weeks, showed the Irish accent progressively getting stronger as she recovered from surgery.

The accent didn’t ‘kick in’ until eight days after the operation in a phenomenon even her doctors couldn’t explain. 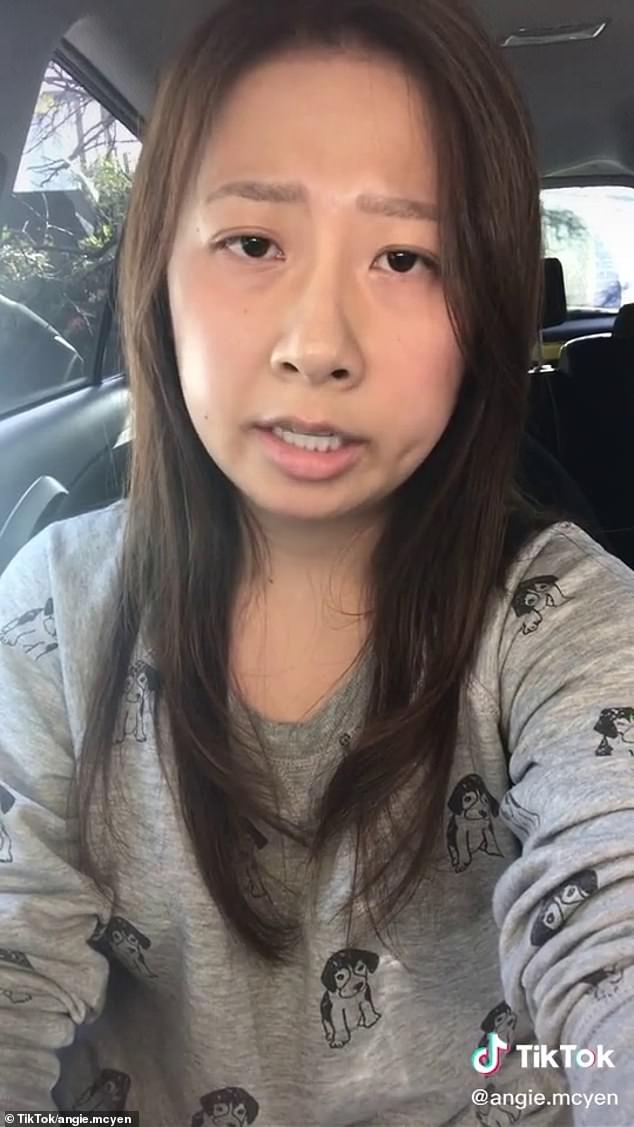 Angie is suffering from Foreign Accent Syndrome, a condition that has only been recorded just over 100 times in history and usually occurs after a brain injury

She claims she went to the hospital and spoke to her specialist after the accent persisted but was told to ‘sit tight’ and ‘let the body heal’.

‘I woke up this morning and I was speaking with my Aussie accent, and I called one of my friends and confirmed that my Aussie accent was back but during the phone call, within five to 10 minutes, she could see the deterioration of my accent back to Irish,’ she said in one of her TikTok clips.

‘I don’t know what to do, this is something that’s very different. I’m not even trying, I’m completely freaked out. I thought it was going to go away eventually.’

Soon after, Angie said there were ‘no traces of Aussie twangs anymore’ and she had gone ‘full Irish’.

‘I still can’t believe I woke up with an Irish accent. I’ve never been to Ireland. I grew up in Australia. My Aussie accent is gone.’

What is Foreign Accent Syndrome?

Foreign Accent Syndrome is a rare disorder that sees the patient speak with a different accent than their natural speaking style.

It is usually the result of a head or brain injury, with strokes being the most common cause.

FAS can also occur after trauma to the brain, bleeding in the brain, a brain tumour or multiple sclerosis.

It has only been recorded 100 times since its discovery in 1907.

It causes suffers to pronounce vowels in different manners, move their tongue and jaw differelt while speaking to produce a different sound and even substitute words for others they may not normally use.

Foreign Accent Syndrome can last months or years, or sometimes it may even be permanent.