Emotional footage shows the moment a teenager rings a bell marking the end of his eight-month treatment for stage four cancer.

Luke Broadbent, 13, from Walsall, West Midlands, was initially thought to have a virus by doctors, suffering with weeks of exhaustion, headaches and sickness.

But his family were devastated to find out he had a brain tumour in April this year, leaving his mother, Donna, 40, struggling to tell her son what was happening.

Luke had a medulloblastoma, which is the most common brain tumour in children. He underwent ten hours of emergency surgery to remove the mass, along with several rounds of radiotherapy and chemotherapy.

Luke was finally given the all clear last Tuesday, December 18, at Birmingham Children’s Hospital, as nurses lined the corridors to celebrate him ringing the bell.

Luke Broadbent, 13, from Walsall, West Midlands, finished has eight months of chemotherapy and radiotherapy and can enjoy Christmas. Pictured with his mother, Donna, 40 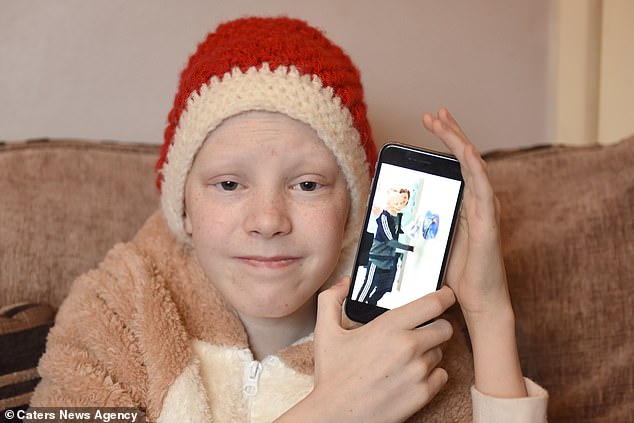 Luke, pictured at home showing the video which has now gone viral on social media 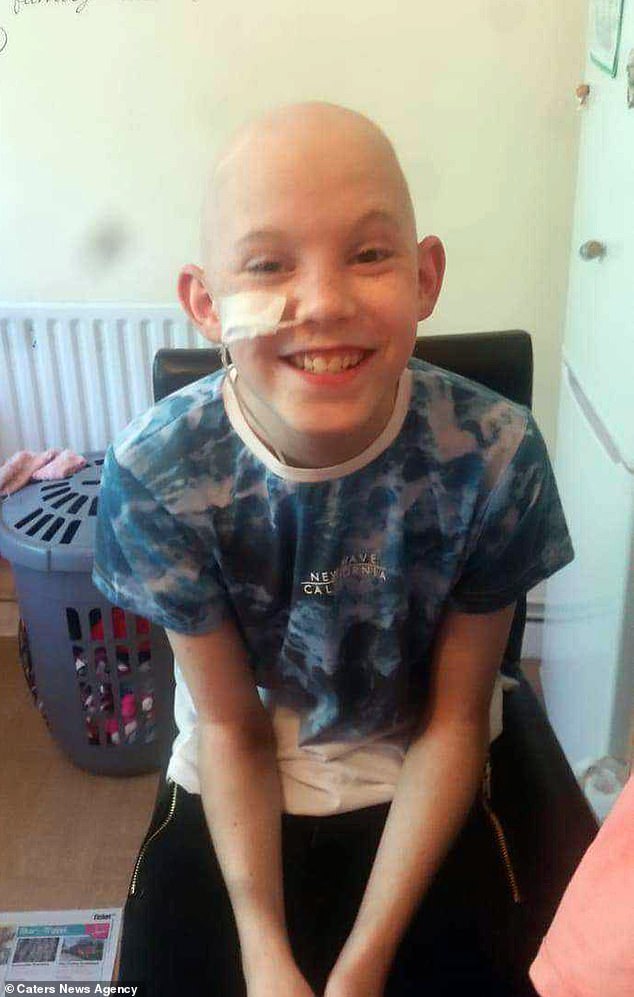 Luke found out he had a medulloblastoma, which is the most common brain tumour in April

The poignant clip has since gone viral, racking up 29,000 views on social media.

Ms Broadbent said: ‘It’s the best Christmas present I could have ever hoped for.

‘It has been an emotional rollercoaster since he was diagnosed and I haven’t left his side.’

‘At first doctors thought Luke had a viral infection as he began suffering from crippling headaches and sickness.

‘But in reality he was actually battling an aggressive brain tumour, it was such a shock.’

Between 15 and 20 percent of childhood brain tumours are medulloblastomas, according to Children with Cancer, with survival rates as high as 70 per cent.

Ms Broadbent, a stay-at-home-mother to four children, said: ‘I took him to our local Manor Hospital A&E with his symptoms but the only test he didn’t have while there for 10 days was an MRI. 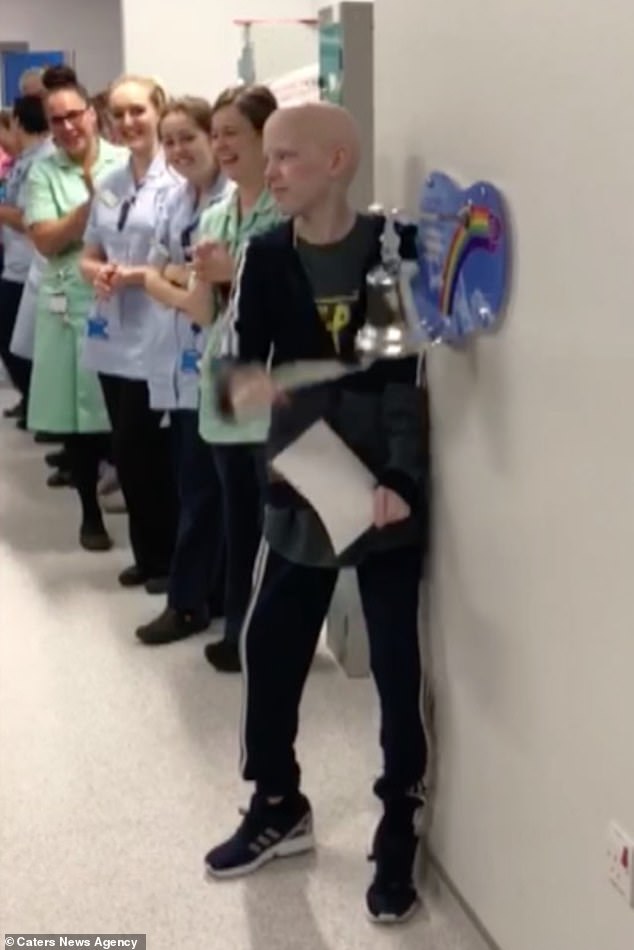 Luke was finally given the all clear last Tuesday, December 18, at Birmingham Children’s Hospital, when he rang the bell as his emotional family looked on 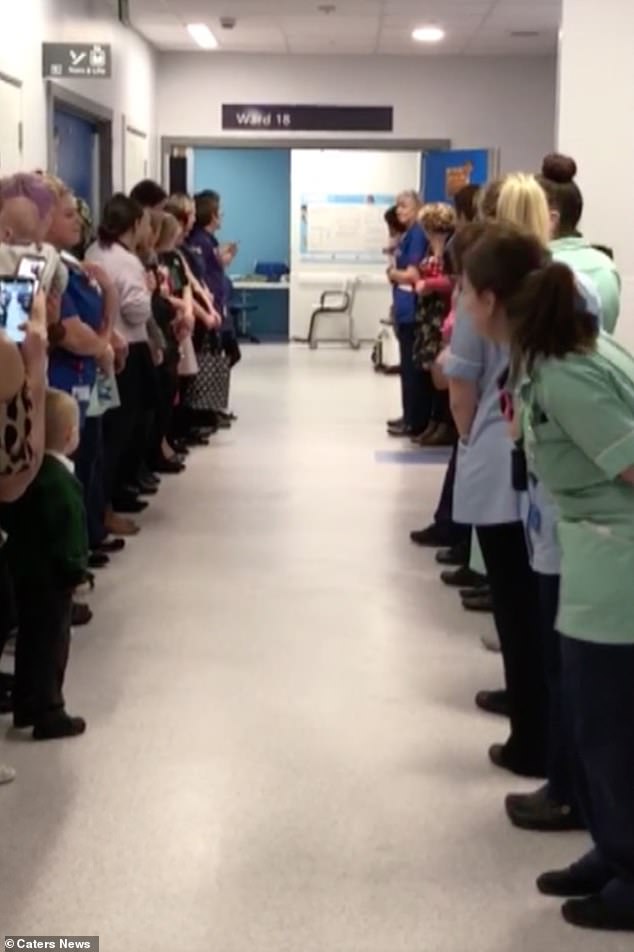 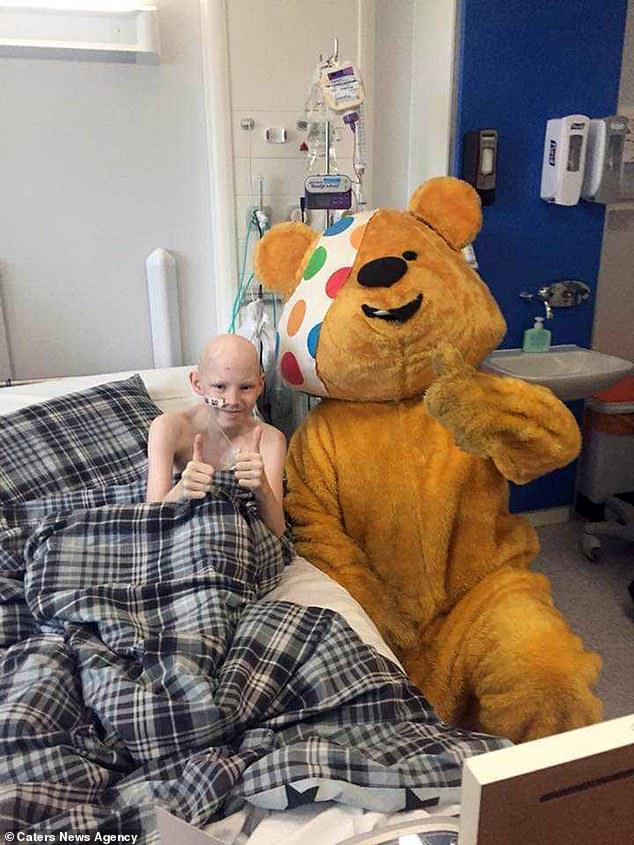 ‘It was only after his sickness continued that he was readmitted on April 16 and he had the crucial scan which led him to be diagnosed with a brain tumour the day after.

‘I had no idea it would be cancer, let alone stage 4, it completely devastated us as a family.’

The tragedy of Luke’s condition was too difficult for his mother to comprehend, and she was unable to tell him.

She said: ‘I didn’t tell him it was cancer at first as I didn’t want to scare him. I would say there was a big ball in his head and that it was being treated.

‘The doctor told him it was cancer as I couldn’t face telling him, Luke cried but he soon got on with it. He is such a fighter.’

Ms Broadbent said Luke has barely been away from his siblings, Kane Barratt, 18, Jack Broadbent, 15, and Zoe-louise Broadbent, 14, before.

But ahead of him was a long road to recovery – eight months of intense treatment in hospital. 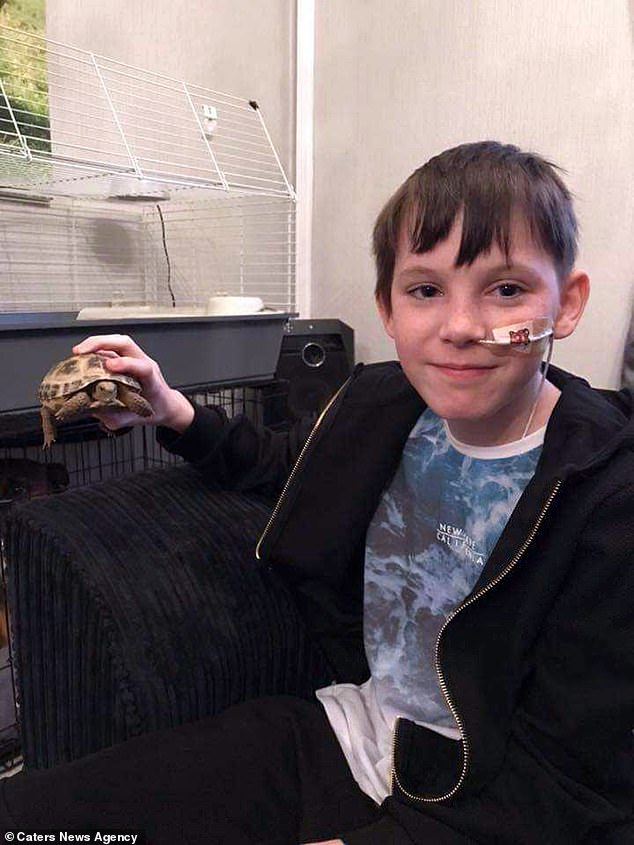 Luke was initially was thought to have a virus by doctors, suffering with weeks of exhaustion, headaches and sickness, according to his mother 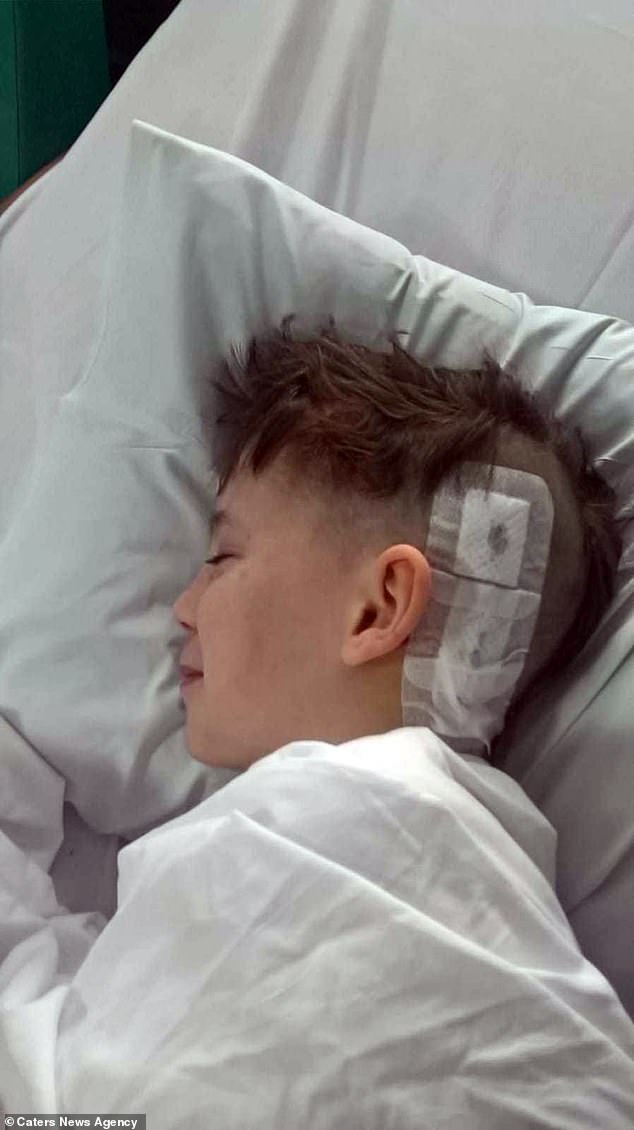 Luke had to have the tumour, which is the most common type of brain tumour in children, removed in surgery in April this yea 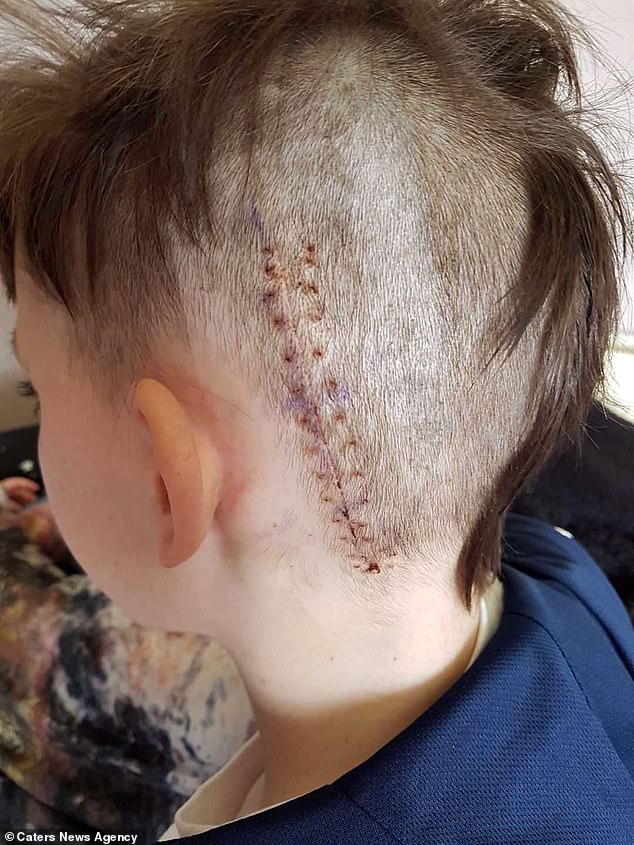 Luke, who has a scar from his surgery, has missed school since his diagnosis in April. But his mother said there have been teachers coming around the wards every day 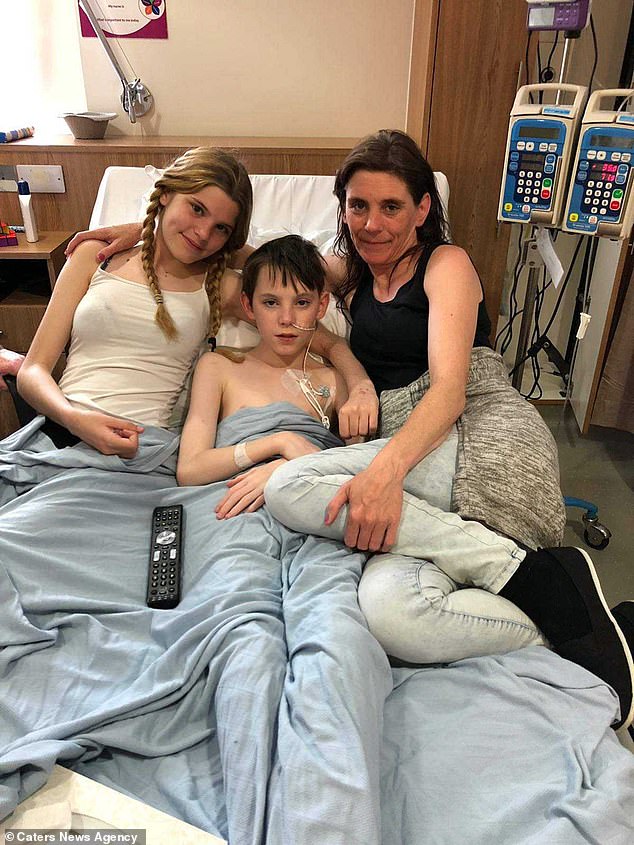 Luke’s mother, Donna Broadbent, 40, said the diagnosis was too difficult for her to reveal to her son. Pictured, with Luke’s sister, Zoe-louise, 14, during treatment in hospital

WHAT ARE THE SYMPTOMS OF A MEDULLOBLASTOMA TUMOUR?

The signs and symptoms of a medulloblastoma are usually caused by increased pressure in the brain.

In some cases, the tumour can spread to the spinal cord, causing another set of symptoms, such as back pain, an inability to control the bowels and bladder and difficulty walking.

‘He has been through several sessions of radiotherapy, four cycles of chemotherapy as well as stem cell treatment,’ Ms Broadbent said.

‘We’ve lived in the hospital since his diagnosis as he needed such aggressive treatment.

‘His hair fell out and he lost the hearing in his one ear as it was so harsh but we knew he needed it to save his life.

‘He has missed school since his diagnosis in April but there has been teachers coming around the wards every day.

‘I was so proud of him ringing the cancer bell on Tuesday, it’s such a miracle he’s here.’

Despite Luke being triumphant in beating his brain tumour, he still requires regular hospital check-ups.

‘His blood levels still aren’t right at the moment after all the treatment but we’re hoping our visits will be less frequent in the new year.

‘Luke is such a miracle and it makes me so emotional thinking about the last eight months.

‘Luke has been so brave and we can’t thank the staff at Birmingham Children’s Hospital anymore if we tried.

‘Luke’s half sister, Jodie Bryan,29 and half brother, Chris Brown, 27, have been amazing as well.

‘I hope other families going through something similar see that there is light at the end of the tunnel, Luke is living proof that you can get through it.’