Emotional moment deaf teenager, 13, hears again after he is reunited with the hearing aid he lost

A mother has shared a touching video showing the moment her profoundly deaf son received the hearing aid he had lost in a cemetery two days before.

Ben Farrimond, 13, wears two cochlear implants to assist his hearing after surviving meningitis at ten months old, but was left deaf and with special needs.

But after he lost one of his implants, which cost £3,500 each on the NHS and give him perfect hearing, Ben was left in disarray and unable to hear out of his right ear.

His family, of St Helen’s, Merseyside, desperately searched the cemetery where he had lost it.

His mother, Samantha, 35, decided to keep her finding of the hearing aid a secret, creating a magical moment whereby an early Christmas present arrived ‘from the elves’.

Samantha Farrimond, 35 shared a video of the moment her profoundly deaf son, Ben, 13, received the hearing aid he had lost in a cemetery two days before 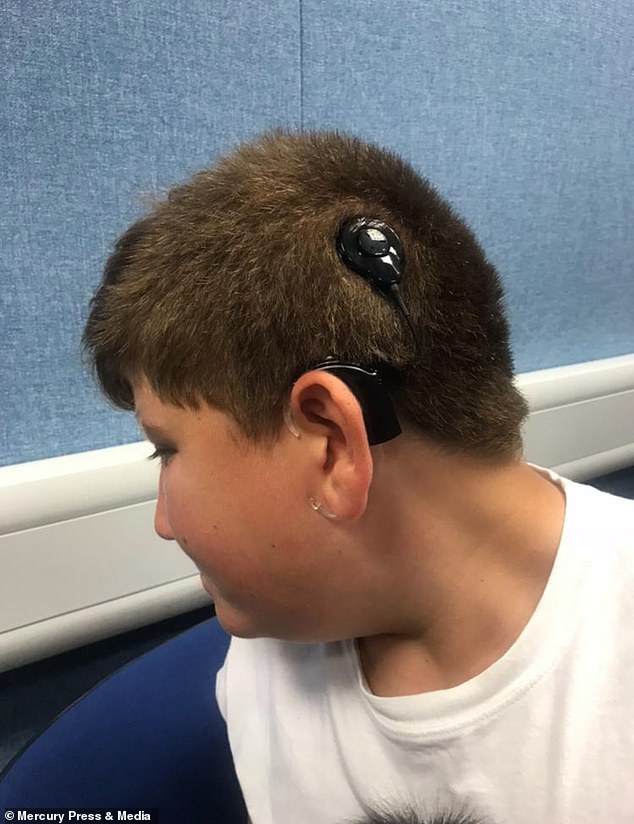 Ben lost one of his £3,500 cochlear implants, which give him perfect hearing, on Sunday, and was left in disarray and unable to hear out of his right ear 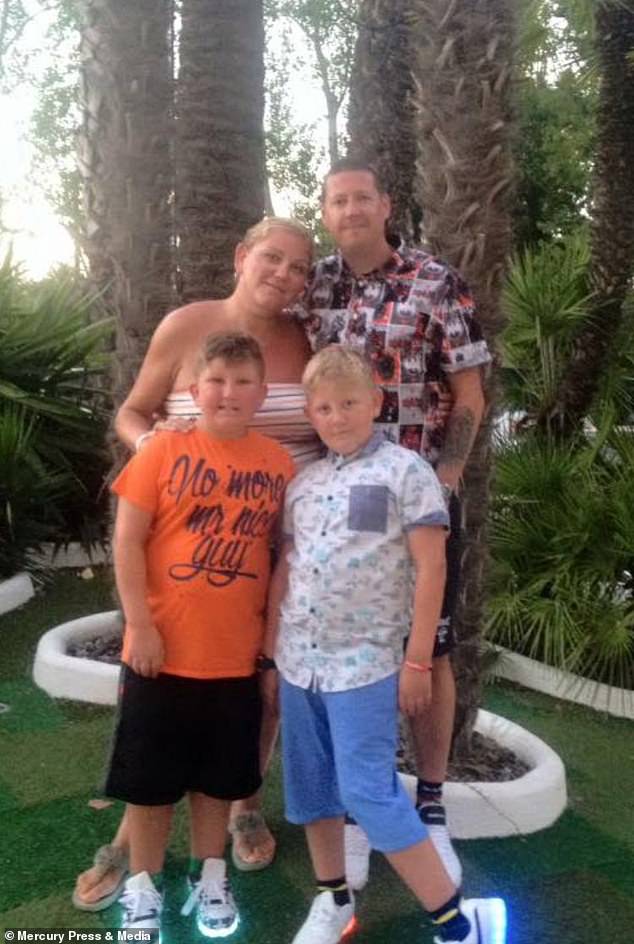 The family, including father Chris Farrimond, searched for the lost cochlear implant for two days, after Ben lost it in a cemetery playing with his brother, Daniel, 11

Mrs Farrimond, a full-time carer for her son, said: ‘Ben was with his grandparents laying wreaths at the cemetery when he lost the implant whilst messing around with his brother, Daniel, 11.

‘When he came back for dinner later that evening I noticed that the implant had gone and immediately I went into panic.

‘We immediately went and searched the cemetery, but didn’t find anything for two days.

‘Luckily when we returned on the Tuesday night, I managed to find the implant and quickly hide it so that Ben didn’t see it, as I had an idea.’

The next morning, Ben ran downstairs to see ‘what the elves had been up to’ – a Yuletide tradition the family have.

Ben, who also has global development delay – when cognitive development is slower than usual during childhood – was so shocked that his ‘magic ear’ had been returned.

Mrs Farrimond explained that her idea to get the elves to gift him the present came when he spotted Santa in the tree of the cemetery.

She said: ‘When he was walking through the cemetery he saw a Santa toy sitting in the tree, and I told him that it meant he was always keeping an eye on him.

‘So when I found the implant later on that evening, I knew that I had to incorporate him into the reveal somehow.

‘Ben massively believes in Santa and the elves still, so it seemed like the perfect way to make him feel even more Christmassy.’ 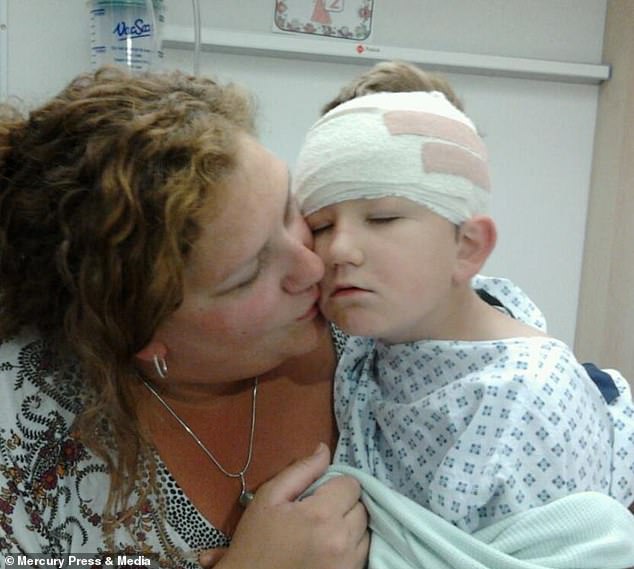 Ben was left with profound hearing loss and global development delay after surviving meningitis at ten months old. Pictured, with his mother, when he received his first implants 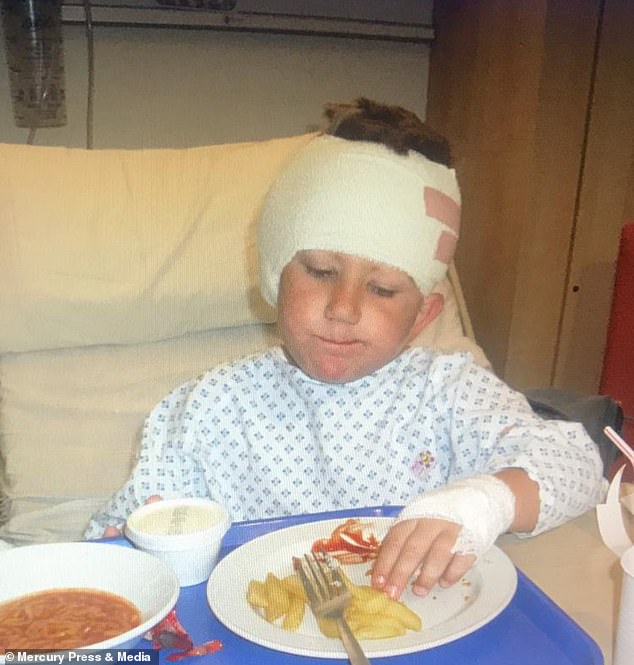 Age five, Ben was given his first cochlear implants, a surgically implanted neuroprosthetic device that provides a sense of sound to a person with severe hearing loss

When Mrs Farrimond got home, she scrawled a letter out from ‘Buddy the elf’, wrapped the gift and positioned them to look as though they were giving the gift to Ben.

‘When he opened the letter he couldn’t believe it, you can see the excitement in his face,’ Mrs Farrimond said.

‘He started reading out the letter and was just so shocked to have received a letter from Buddy the elf, let alone telling him about his ears.

‘Then when he opened the present he was just speechless – he was so excited to have his ear back, but even more excited to see who had ‘found’ it.

‘It was such a lovely thing to witness as he was so surprised, and now he can’t stop telling everyone else about what happened.

‘And I think he’s definitely going to take better care of his “magic ears” now Santa has instructed him to do so!’

Hearing loss is the most common after-effect of bacterial meningitis, according to the charity MeningitisNow.

Inflammation from the illness can damage the nerves that run between the ear and brain, or swelling could sread to the inner ear, damaging the cochlea – a part of the inner ear.

WHAT IS GLOBAL DEVELOPMENT DELAY?

Global development delay is defined as a child taking longer than average to reach certain milestones.

This might include them learning to walk or talk, movement skills, discovering new things or interacting with others.

Developmental delay may be caused by complications at birth, such as insufficient oxygen; environmental issues, like exposure to alcohol in the womb; or other medical conditions, including chronic ear infections.

Between one and three per cent of people in the UK suffer. Up to seven per cent have the condition in the US.

For some, global development delay only affects them in the short term and can be overcome with additional support. Others may require ongoing therapy.

Treatment depends on the individual but may include physio or occupational therapy to help with motor skills, as well as speech, behavioural or music therapy.