An emotional father was able to hear his son’s heart beat again inside the chest of a woman whose life was saved by the organ transplant.

Matthew Spahn, from Brenham in Texas, was tragically killed in October 2018 when a vehicle crashed into him as he walked home.

The 21-year-old, who was an award-winning runner, fought for his life in hospital for ten days before he passed away on October 17 – and his father Jordan Spahn, 47, ‘never left his side’.

As an organ donor, Matthew saved five lives after his death as seven of his organs, alongside skin and tissue, were donated to those in need.

Jordan Spahn, 47, hears the heartbeat of his son Matthew Spahn inside the chest of Kristi Richard Russ after her life was saved by an organ transplant

His heart was a ‘perfect fit’ for Kristi Richard Russ, 54, who received the organ in a transplant after she suffered a heart attack.

Mr Spahn and his wife Summer Mossbarger, 32, met with Ms Richard Russ for the first time at a pizza restaurant on February 10, where they talked for hours.

The father, who is a construction worker, was also given the incredible opportunity to hear his son’s heart beat again – inside Ms Richard Russ’ chest.

In a clip from the five-hour meeting, Mr Spahn is seen pressing a stethoscope to his ears as Ms Richard Russ holds the resonator to her heart.

The 54-year-old, who received the organ after living with 10 per cent heart function ‘for a long time’, comforts the construction worker for a moment as they stand in silence. 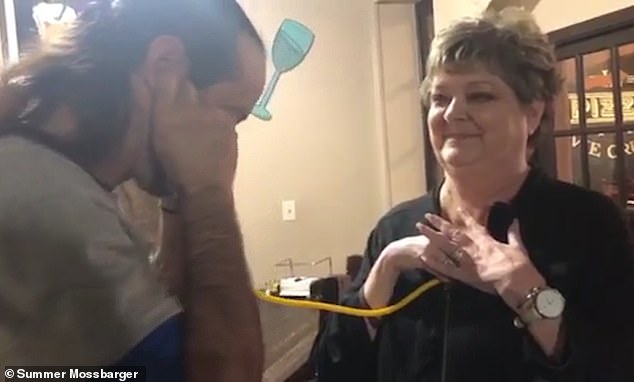 Mr Spahn and his wife Summer Mossbarger, 32, met with Ms Richard Russ for the first time at a pizza restaurant on February 10 after Matthew’s death in 2018 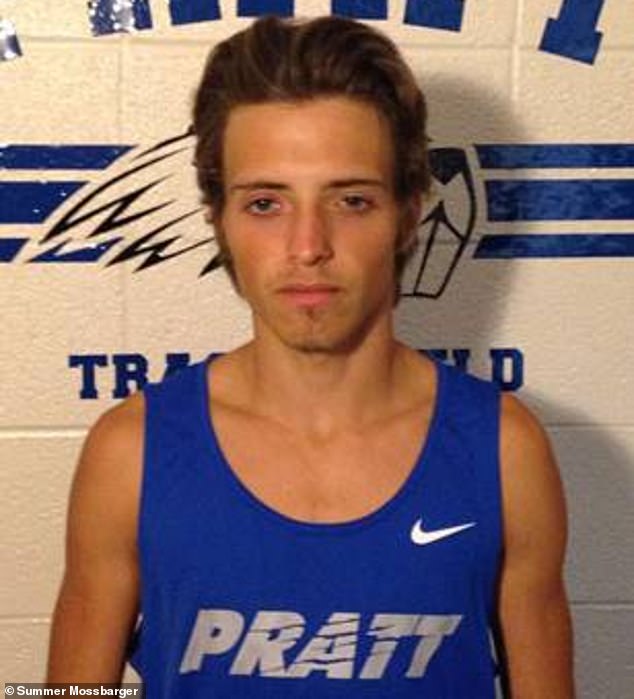 Pictured: Matthew Spahn, who died ten days after he was struck by a car as he walked home in October 2018

‘You know I heard his heart beating for ten days straight,’ Mr Spahn says, referring to the time Matthew spent in hospital before he sadly passed away on October 17. ‘On the monitor, just watching it.’

‘It’s so strong,’ he adds, clutching the stethoscope and smiling with his eyes closed.

‘That it is’, Ms Richard Russ says. ‘When it’s quiet at night, even without the stethoscope’.

Mr Spahn adds ‘he’s probably out there running laps’ as the emotional clip comes to an end.

Speaking after the meeting, Ms Mossbarger admitted she and her husband were both ‘nervous and excited’ before the visit. 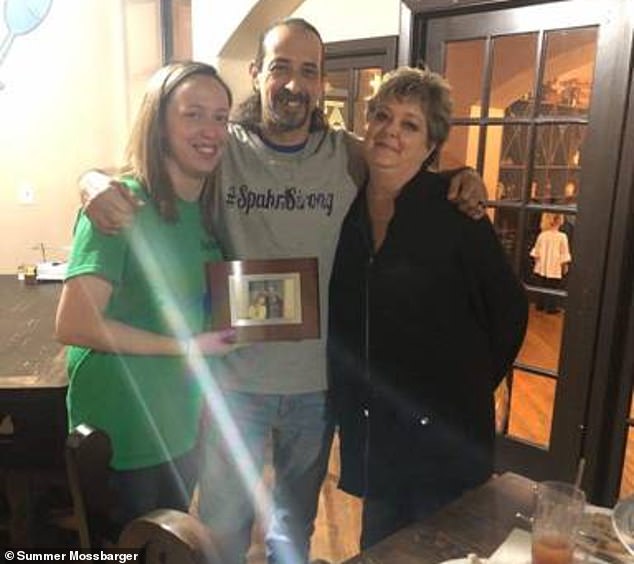 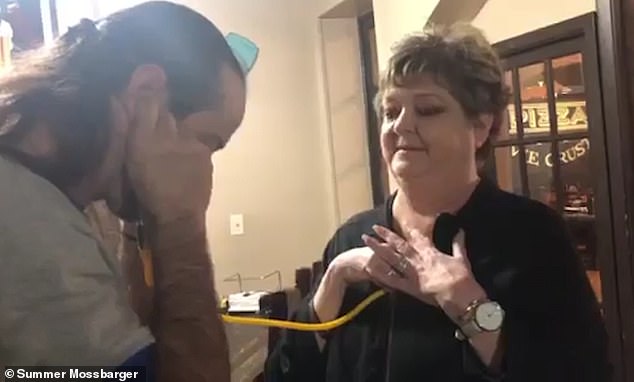 In a clip from the five-hour meeting, Mr Spahn is seen pressing a stethoscope to his ears as Ms Richard Russ holds the resonator to her heart

‘We were both very nervous and excited before the visit. We all greeted each other with hugs and we talked for five hours at a local pizza place,’ she said.

‘Jordan was happy, peaceful, with tears of joy that Matthew was brave enough to be an organ donor – unbeknownst to family – and blessed that he has a little bit of Matthew still living through someone else.

‘Jordan is the strongest man I’ve ever met.’

She added that after Matthew’s tragic death in 2008, his brother Jonah was killed on February 1, 2019 – also in a car accident.

‘This whole experience has been one of healing and moving forward,’ she said. ‘We feel really blessed and honored to have known such an amazing person that Matthew was, and to meet the woman whose life he helped save.

‘Kristi is a blessing to our family and very grateful that she has been so open and loving though all of this.’