Hamish Macdonald has choked back tears after being moved by the heartbreaking decision faced by a daughter whose father has early-onset Alzheimer’s.

The Q&A host was visible emotional when hearing the story of Tim Granger and his daughter Prue on Thursday night’s episode shining a spotlight on aged care in Australia on the eve of the final report of the Royal Commission into the sector.

Ms Granger revealed how the family was grappling with the difficult reality her father would have to be placed into an aged care facility at such a young age. Mr Granger was diagnosed with early-onset Alzheimer’s five years ago when he was just 51.

‘I think what makes it scary is that he’s so much younger. He’s going to potentially be going in his 60s or sooner, which we really want to avoid,’ she said.

‘But if that occurs how can he live his best life in these facilities that aren’t really set-up for him at his age. It’s an issue. More people are getting diagnosed with early-onset Alzheimer’s.’

Ms Granger, who teared up as she explained her father’s devastating story, raised her concerns the aged care sector was not equipped to handle Alzheimer’s patients.

‘I’m scared because I think it’s not something that you think is going to happen so soon. We would like to be able to support him for as long as we can. But the reality is we probably can’t,’ she told the program.

‘We also have financial concerns because we liked to be able to put him in a facility that will support him and his needs but I don’t know if we could afford that or if we would get in.

‘Listening to everything everyone is saying and bringing up, it’s scary, really scary.’

Ms Granger’s words moved Mr Macdonald to tears, with the host struggling to maintain his composure as he proceeded with the show. 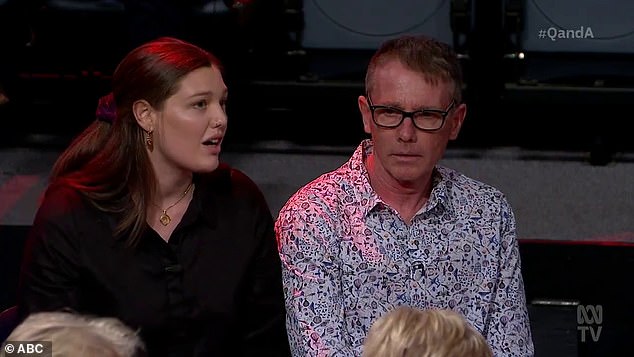 Prudence-Rose Granger appeared on Thursday night’s Q&A program alongside her father Tim Granger (pictured together, who was diagnosed with early-onset Alzheimer’s five years ago

‘I’m so sorry to hear that that’s a choice you’ve got to make as a family. I’m sorry,’ he said.

Mr Granger, who is an advocate for Dementia Australia, told of his fears over the difficult decision faced by his family.

I am 56 years old and I am an advocate for Dementia Australia. I was diagnosed with early-onset Alzheimer’s five years ago

I live a very active, healthy and social life. It is important for my health that I maintain this lifestyle, no matter what challenges my diagnosis presents

Question: I’m fit, I’m healthy, I’m 56 and living with Dementia. I have a friend with the same condition as me who lives in an aged care facility in Wollongong, this facility caters to his needs and supports him living an active life with early-onset Alzheimer’s

We know of this aged care facility in Wollongong, one in Queensland and one in Tasmania that accommodate those who are younger, however, they are few and far between. How are you going to accommodate our family and others in the same circumstance live their best life in aged care?