Emotional residents have begun returning to their homes in Montecito after devastating mudslides wrecked the town two weeks ago and killed at least 21 people.

On Thursday, people trickled back to the California coastal town and surveyed the damage.

Santa Barbara County officials finally lifted evacuation orders this week for about 1,600 people in the hillside enclave of Montecito, while thousands of others still waited for word that it was safe to return.

Sheriff’s deputies drove vans full of evacuees back to their homes. The owners of those that were heavily damaged or destroyed were allowed to briefly search the rubble for precious belongings.

Glenys Scribird looks at her damaged house off of East Valley Road in Montecito on Thursday. Scribird was unable to retrieve any property due to the structural damage. Emotional residents were escorted back to their homes to retrieve necessities after a mudslide devastated homes and killed at least 21 people and destroyed more than a hundred homes 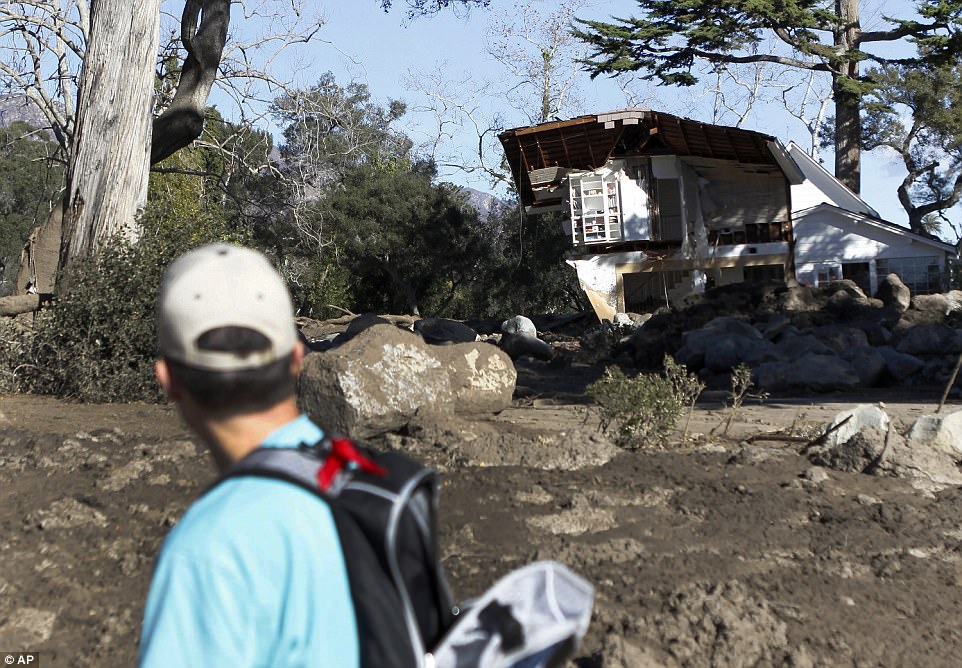 Greg Tebbe walks by his neighbors house after returning to his home off of East Valley Road in Montecito, California

‘I don’t think people grasp the enormity of it,’ WME’s Rick Rosen said to The Hollywood Reporter.

‘You watch images of tornadoes in Oklahoma, Tennessee and Texas — you never think anything like that could happen in Santa Barbara,’ he said to the outlet. ‘It’s just crazy and shows no one is immune to these things, regardless of your socioeconomic standing.’

‘It looked like we’d been attacked by a vastly superior planet,’ said writer-producer Les Firestein. ‘Like an Imax movie.’

Curtis Skene fought back tears as firefighters uncovered old photographs of his father in the ruins of his home.

‘You have to be grateful you’re OK,’ Skene said. ‘It’s just stuff.’

Eric and Pamela Arneson found their home still standing. While he dug through their refrigerator, throwing away spoiled food and chuckling at how bad it smelled, she took notes on each item to submit to their insurance company. 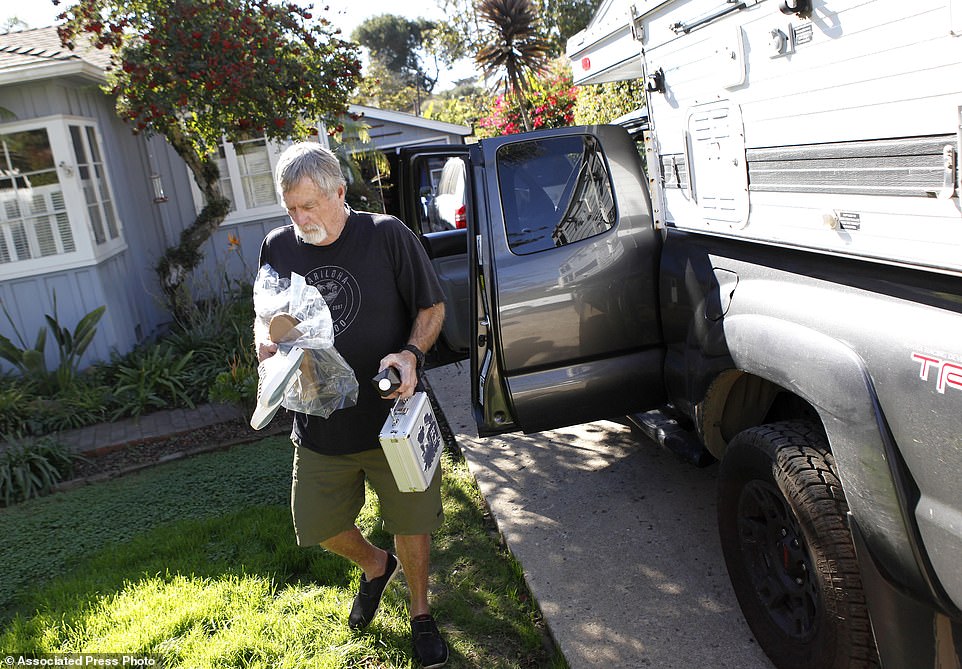 Eric Arneson unloads his truck after returning to his home in Montecito, California on Thursday. Residents are trickling back to the California coastal town that was devastated two weeks ago 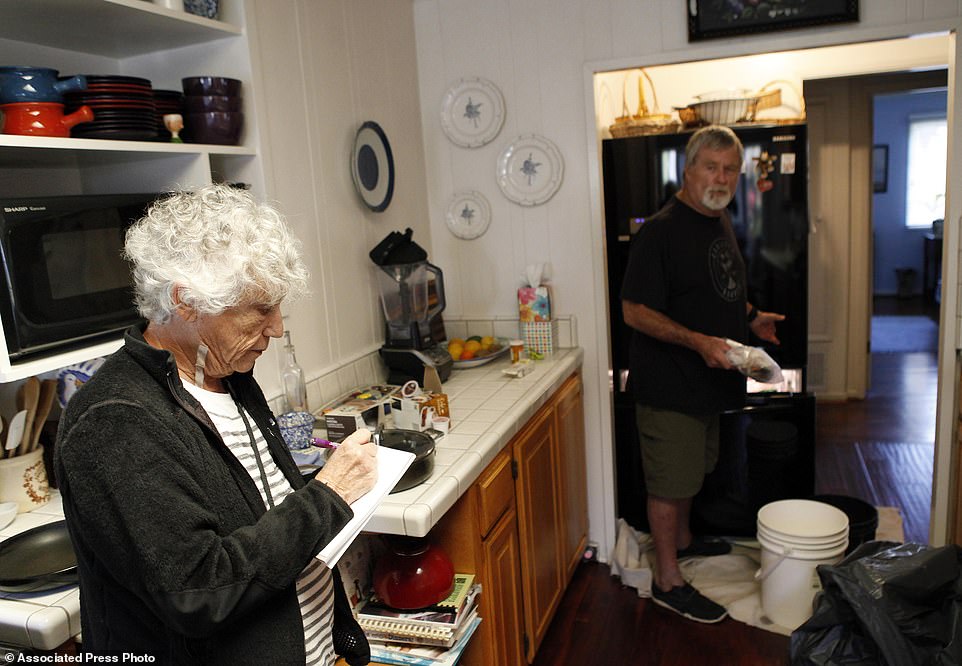 Pamela Arneson writes down the food that was lost as Eric Arneson, 72, cleans out the refrigerator after returning to their home for the first time in almost two weeks in Montecito, Calif., Thursday, Jan. 25, 2018. Emotional residents are trickling back to the California coastal town that was devastated two weeks ago by mudslides that killed at least 21 people and destroyed more than a hundred homes. (AP Photo/Daniel Dreifuss) 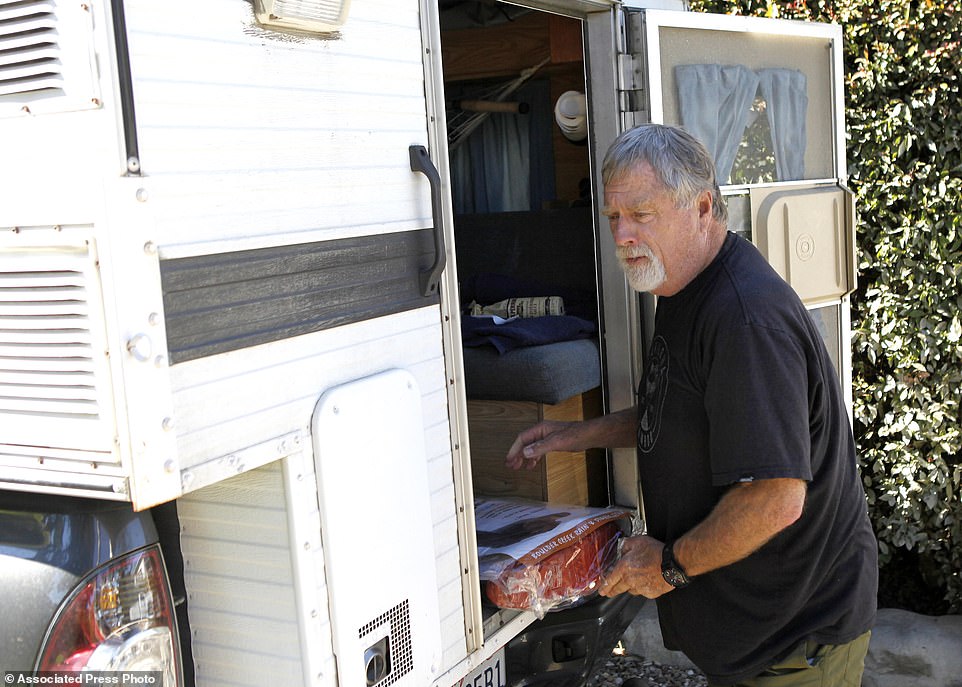 Eric Arneson unloads his truck as he returns to his home in Montecito, Calif., Thursday, Jan. 25, 2018. Residents are trickling back to the California coastal town that was devastated two weeks ago by mudslides that killed at least 21 people and destroyed more than a hundred homes. (AP Photo/Daniel Dreifuss)

The couple initially remained in their home after the mudslides but later stayed with friends and in a hotel when their electricity was shut off a few days later.

‘We can’t feel sorry for ourselves. Our lives are OK. Our house is OK,’ Eric Arneson said.

The couple bought their home in 1972 and had attended church with John McManigal, who died in the mudslides.

‘He was the rock of our church,’ Pamela Arneson said.

Authorities warned that the returns would be gradual and many people would have to stay out until at least the end of the month. 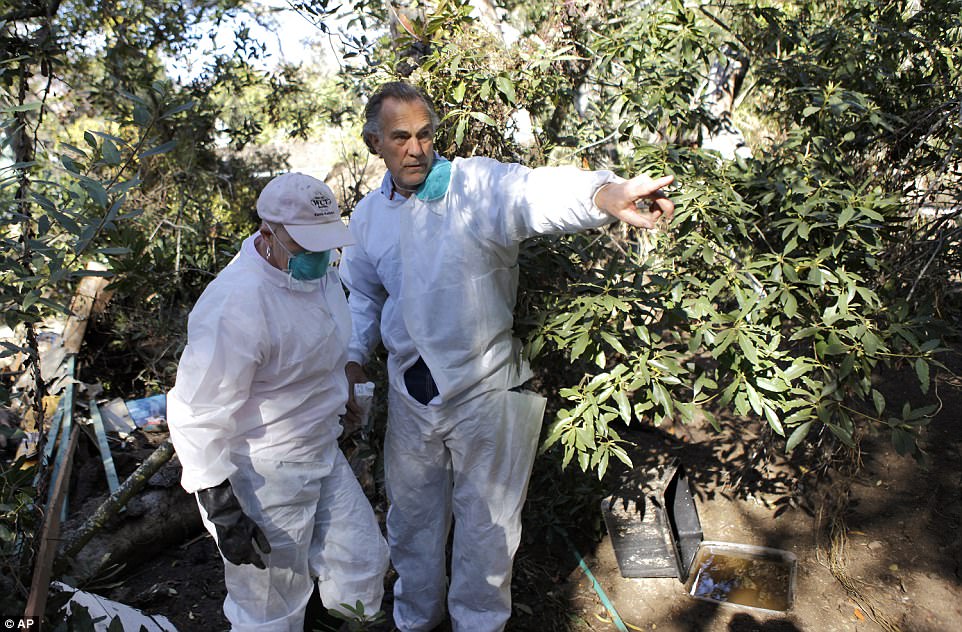 Residents Paige Beard, left, and Curtis Skene search for belongings near East Valley Road lost in the Jan. 9 storm and mudslides in Montecito 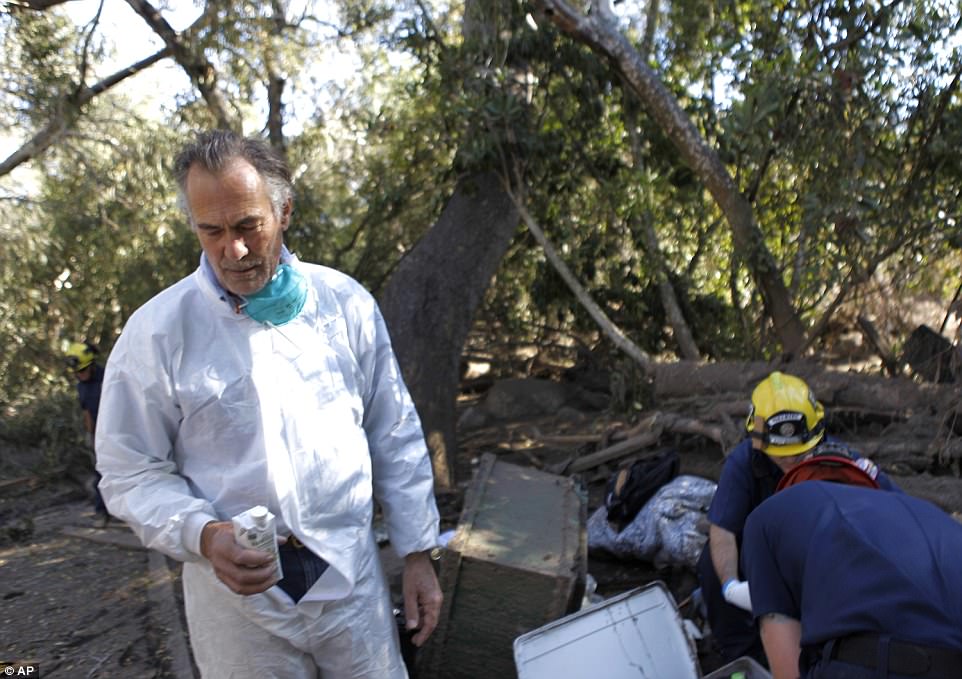 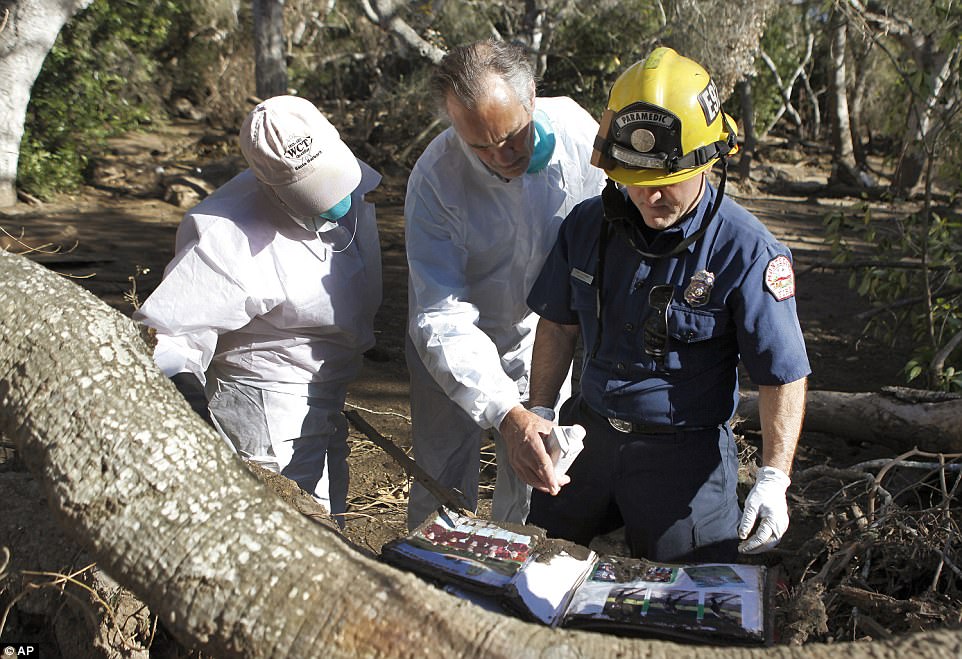 Montecito was hit by debris-laden flash floods on Jananuary 9 when downpours from a storm hit mountain slopes burned bare by a huge wildfire. Hundreds of homes were damaged. A 17-year-old boy and 2-year-old girl remain missing.

The majority of residents and businesses in and around the town of about 9,000 people have yet to receive an all-clear advisory. 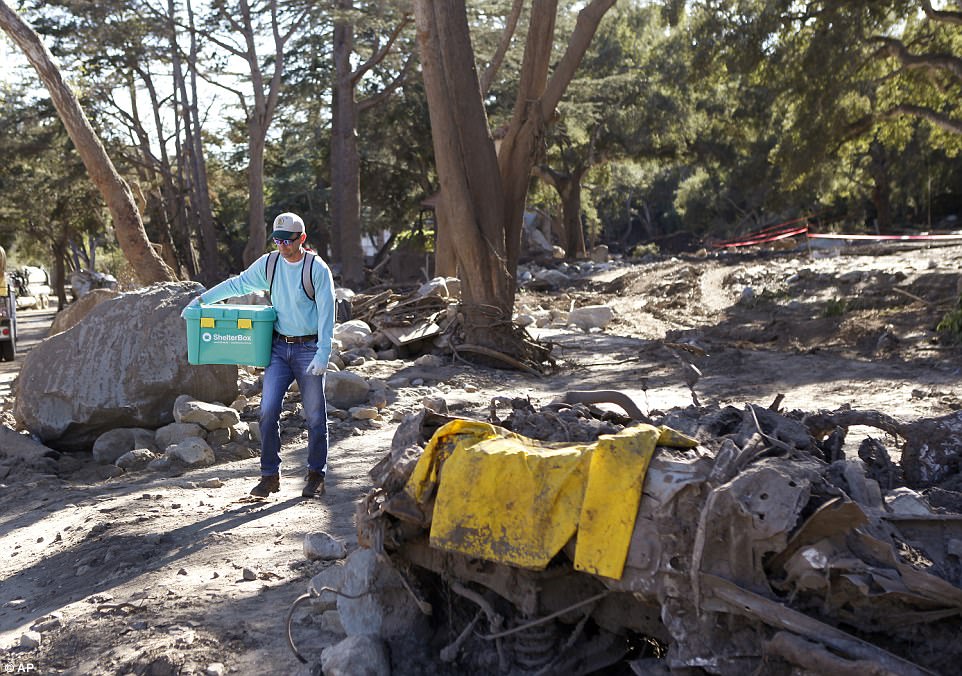 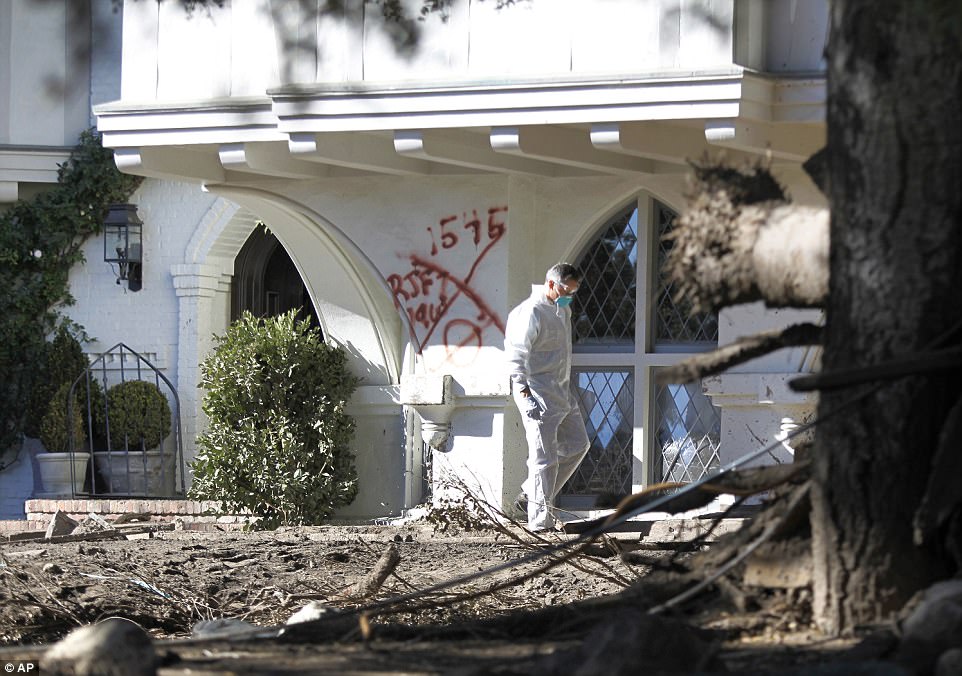 On Thursday attorneys announced a class-action lawsuit they have filed on behalf of a group of Montecito residents and business owners. They are suing the utility Southern California Edison, saying it had a role in starting the fire that led to the subsequent displacement and devastation.

It comes after a similar lawsuit filed last week that names Edison and a Montecito local utility.

Officials have not given a cause of the fire, and Edison says it’s premature to speculate on the litigation before the investigation is completed. 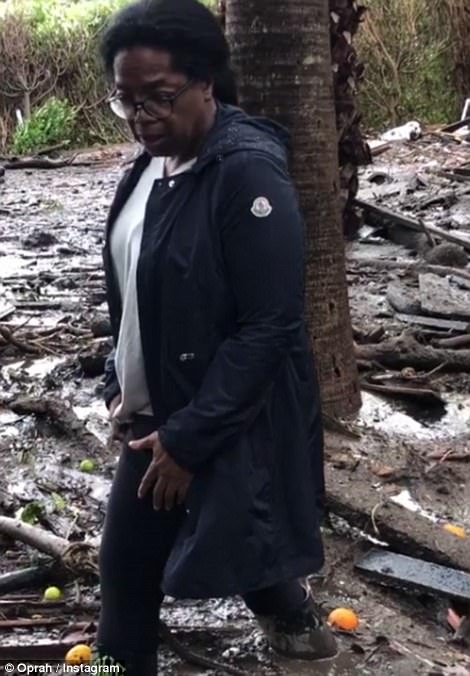 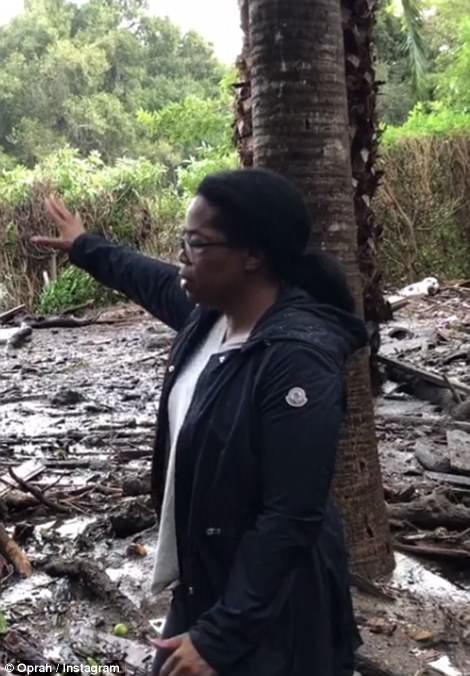 Oprah surveyed her home on January 10, and said there was minor damage that pales in comparison to what her neighbors are going through

Owner Keith Slocum said Thursday that ‘it looked like a Third World country’ in the days after the disaster but since then crews have made significant progress clearing roads. He’s eager to learn when neighboring businesses will be allowed to reopen.

‘We really could use something definitive,’ he said. ‘I don’t know what the benchmarks are for why they open some parts and don’t open others.’ 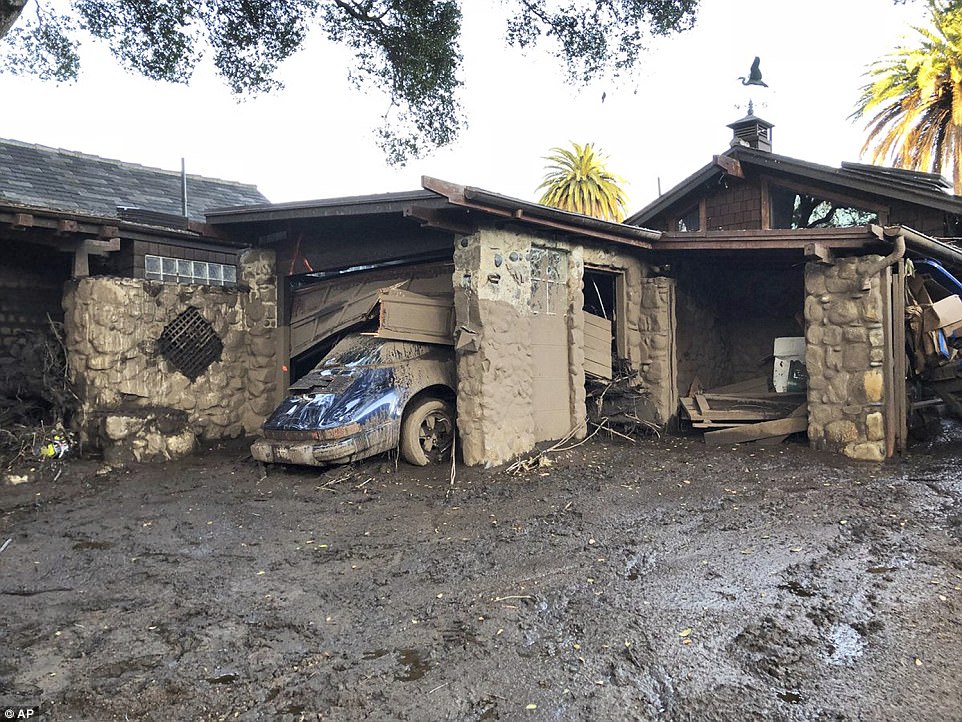