Employers must crack down on sports chat because it ‘excludes women’

Employers must crack down on sports chat in the workplace because it ‘excludes women and encourages laddish behaviour’, management expert claims

Sports chat at work should be discouraged because it excludes women – and if ‘unchecked’ can be a ‘gateway’ to ‘laddish banter’ including men bragging about sexual conquests, the female head of a major business body claimed today.

Ann Francke, head of the Chartered Management Institute, has said that bosses should actively curtail male staff talking about football, cricket and rugby in case women feel ‘left out’ at work.

Speaking to BBC Radio 4’s Today programme Ms Francke, who is married with a daughter, said of sports chatter: ‘A lot of women, in particular, feel left out. They don’t follow those sports and they don’t like either being forced to talk about them or not being included. I have nothing against sports enthusiasts or cricket fans – that’s great. But the issue is many people aren’t cricket fans’.

She added: ‘It’s very easy for it to escalate from VAR talk and chat to slapping each other on the back and talking about their conquests at the weekend. It’s a gateway to more laddish behaviour and – if it just goes unchecked – it’s a signal of a more laddish culture’.

Piers Morgan tweeted today: ‘What utter twaddle. We’ve got to stop these virtue-signalling cretins sucking all the fun out of life’.

Ann Francke, head of the Chartered Management Institute, has made waves by suggesting sports chat at work should be curtailed to avoid excluding women

Ms Francke suggested that talking about technical aspects of football, such as the controversial introduction of video assistant refereeing (VAR), could disproportionately exclude women.

If ‘unchecked’, it could lead to more boorish chat, including about having sex with women, the management expert has said. 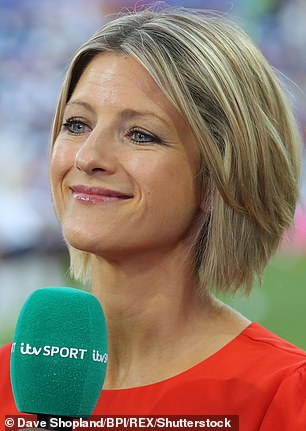 Ms Francke, who says sports chat should be moderated rather than banned, has been branded ‘sexist’ herself by women who do want to talk sport.

Ann is Chief Executive of the Chartered Management Institute but started her career at Procter & Gamble where she managed brands including Pampers and Olay. She also worked for Mars and Boots.

Her biography describes her as ‘an expert on gender balance in the workplace and named in the top 100 women to watch in business in 2015.

Critics have said that by applying the same logic non-work related chat about TV shows such Love Island, EastEnders and Game of Thrones should also be curtailed. While others asked if workers with children could be stopped from talking about them in case it offends those without them.

Ms Francke was debating the issue on radio this morning – where fellow guest Jacqui Oatley, a sports broadcaster, said it would be a ‘terrible idea’.

She said: ‘If you ban football chat or banter of any description, then all you’re going to do it alienate the people who actually want to communicate with each other. 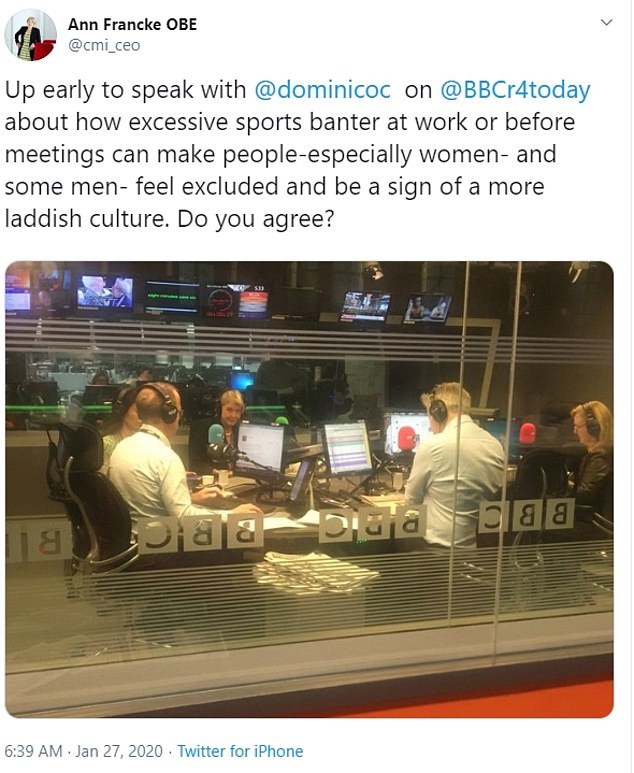 ‘It would be so, so negative to tell people not to talk about sport because girls don’t like it or women don’t like it, that’s far more divisive’.

There has been a huge reaction to the story on social media.

Office manager Debra Smyth is concerned that chat about hit TV shows and soaps could be hit – meaning staff would only be able to talk about work.

She said: ‘I personally think companies should not dictate what people talk about, as not talking about it will alienate those with similar interests.

‘Where would it end? Banning people with children talking about them so as not to alienate people without children. Certainly not!’

While recruiter Peter Ferguson said: ‘I have seen managers and staff build a more direct bond over a shared love of sport which has excluded those who don’t share that interest.

‘The answer is not to ban the conversation, it is to ensure managers and staff are trained to understand that those shared interests should not get in the way of management decisions or working collaboratively.’