President Xi Jinping delivered a blistering nationalist speech Tuesday, warning against any attempts to split China and touting the country’s readiness to fight ‘the bloody battle’ to regain its rightful place in the world.

Xi’s address capped an annual session of the National People’s Congress that paved the way for him to rule for life, as China’s most powerful leader since Mao Zedong pushes through his vision of guiding the country through a ‘new era’ of unrivalled global military and economic supremacy.

Days after President Donald Trump signed new rules allowing top-level US officials to travel to Taiwan, Xi warned that Beijing would defend its ‘one China principle’, which sees the self-ruling island as its territory awaiting reunification.

Chinese President Xi Jinping delivers a speech during the closing session of the National People’s Congress at the Great Hall of the People in Beijing on March 20, 2018 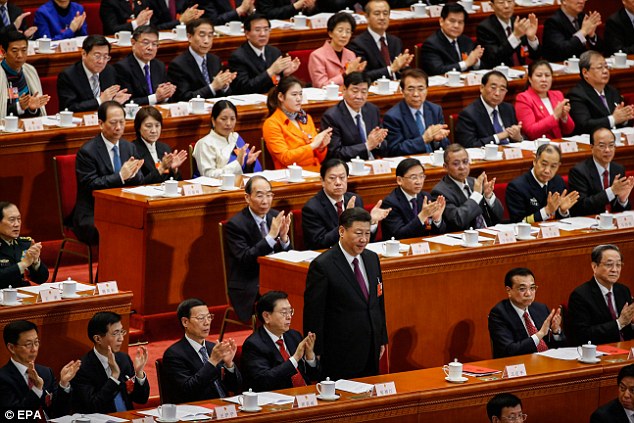 ‘All acts and tricks to separate the motherland are doomed to fail and will be condemned by the people and punished by history,’ President Xi told nearly 3,000 delegates today 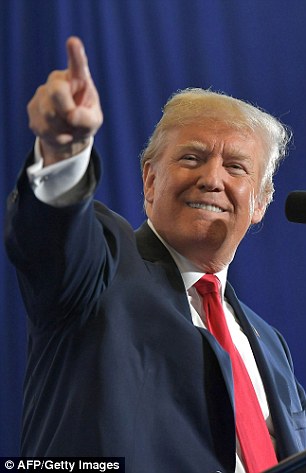 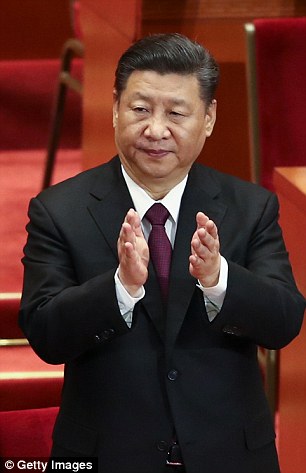 ‘All acts and tricks to separate the motherland are doomed to fail and will be condemned by the people and punished by history,’ Xi told nearly 3,000 delegates assembled at the imposing Great Hall of the People facing Tiananmen Square.

But he also sought to address concerns about ambitious Chinese development projects abroad, saying they ‘will not pose a threat to any country.’

‘Only those who are accustomed to threatening others will see everyone as a threat,’ he added in an address that drew waves of applause from the legislators.

China is overseeing a massive global trade infrastructure initiative to revive the ancient Silk Road, drawing interest from nations participating in the investment but also criticism from others fearing that it mainly serves Beijing’s interests. 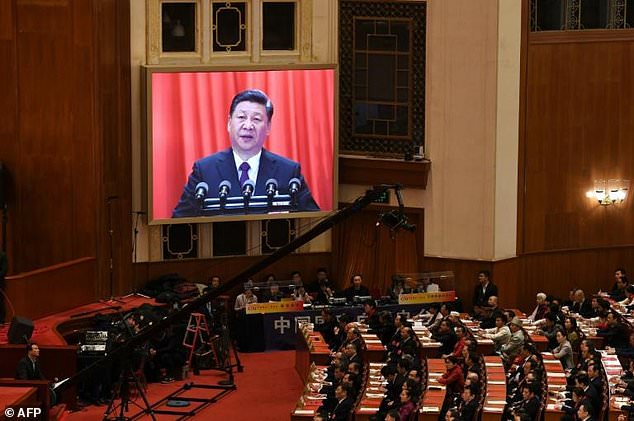 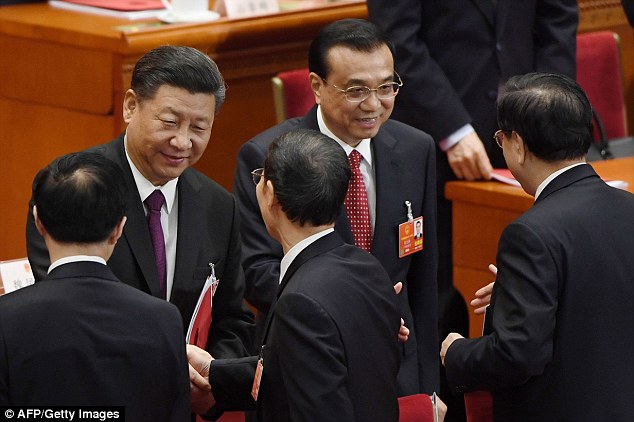 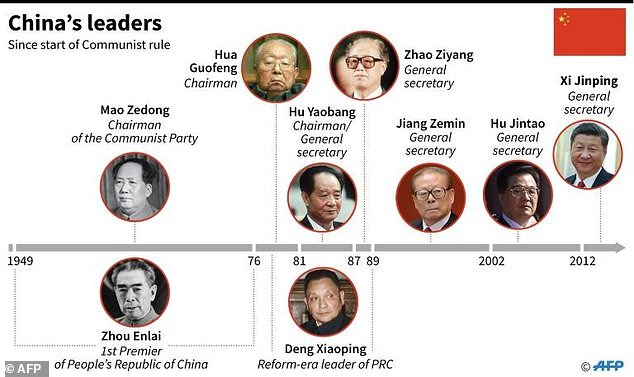 From Chairman Mao to President Xi: The seven most powerful leaders in China since 1949

The Chinese leader’s plan to build a ‘world-class’ military by mid-century has also raised concerns about how it plans to use its increasingly modern forces amid regional frictions over China’s territorial claims in the South China Sea.

Xi used the speech to espouse his vision of realising the ‘rejuvenation of the Chinese nation’ – the ‘greatest dream’ of the world’s second-largest economy.

‘The Chinese people have been indomitable and persistent, we have the spirit of fighting the bloody battle against our enemies to the bitter end,’ he said.

But his speech was also a reminder that the Communist Party, more than ever, reigns over the country’s affairs.

‘History has already proven and will continue to prove that only socialism can save China,’ he said.

‘The Communist Party is the supreme political leadership of the country and the fundamental guarantee to achieve the great rejuvenation of the Chinese nation.’ 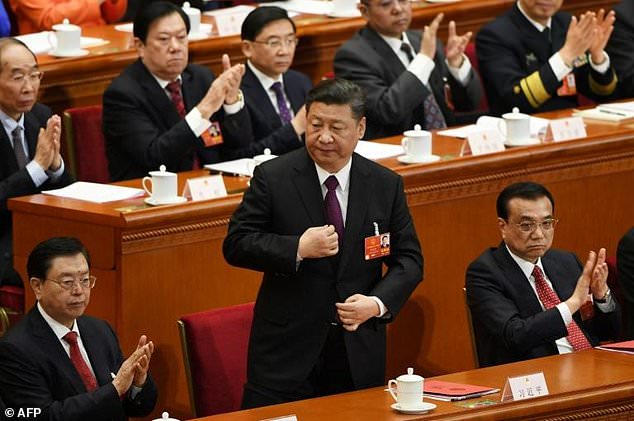 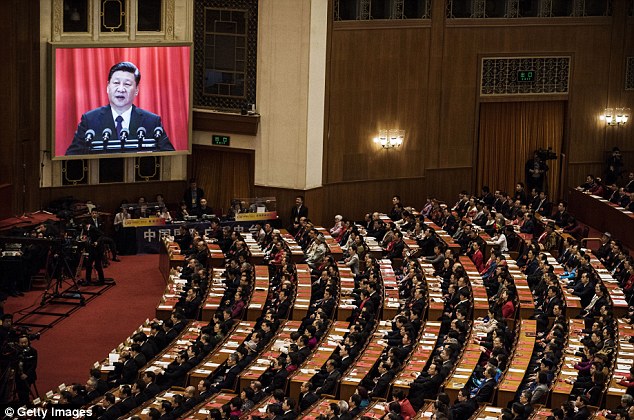 The two-week session of the National People’s Congress handed Xi, 64, a second term and endorsed the Communist Party’s decision to lift presidential term limits, clearing the way for him to remain in power indefinitely after his new term ends in 2023.

His eponymous political philosophy, which was enshrined in the party charter last year, was added to the national constitution and senior government officials had to swear an oath to the document for the first time.

Some of Xi’s key lieutenants were also promoted to top positions. His former anti-corruption czar, Wang Qishan, was elevated to the vice presidency while his top economic adviser, Liu He, became vice premier.

Wang could use his experience as a trade negotiator to deal with rocky relations with the Trump administration, while Liu is expected to have an influential role in economic policymaking.

Why could Chinese President Xi stay in power for life?

The move reversed the era of ‘collective’ leadership and orderly succession that was promoted by form Deng Xiaoping to ensure stability following the turbulent one-man rule of Communist China’s founder Mao Zedong.

The vote has also made Xi Jinping China’s most powerful ruler since Chairman Mao, who rule China from 1949 to his death in 1976.

Trump is considering new punitive measures against China over its ‘theft’ of US intellectual property, raising fears of a tit-for-tat trade war.

‘We hope that both parties can maintain reason, not act emotionally, and avoid a trade war,’ Premier Li Keqiang told a press conference after Xi’s speech.

On the domestic front, the legislature approved the biggest government shake-up in years, merging the banking and insurance regulators to tackle financial risks, and amended the constitution to expand the Communist Party’s role in the country’s affairs.

Xi’s campaign against corruption within the Communist Party, which punished 1.5 million officials in five years, was expanded as the legislature voted Tuesday to create a national agency that will scrutinise millions of public servants. 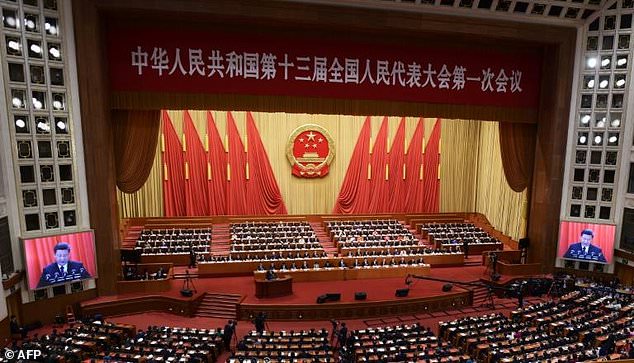 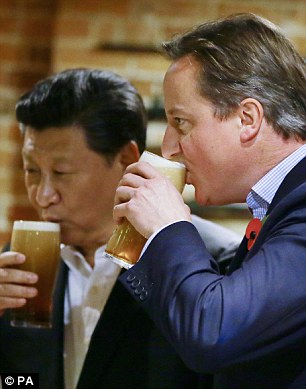 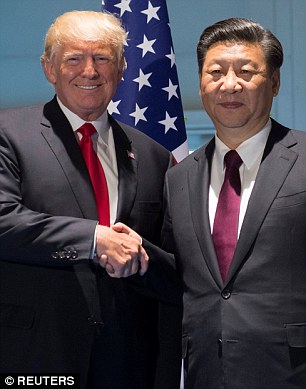 The government’s propaganda machine worked in overdrive to nurture a cult of personality around Xi and stamp out dissenting views during the two-week session.

The People’s Daily, the Communist Party mouthpiece, referred to Xi as the ‘helmsman’ last weekend, an echo of Mao who was known as ‘the great helmsman’.

The abolition of term limits triggered a rare bout of criticism on social media, prompting censors to block dozens of phrases such as ‘I disagree’ or ’emperor’ as well as satirical images such as Winnie the Pooh — the cartoon bear that some compare to Xi.

China has stepped up its crackdown on civil society since Xi took power in 2012, tightening online restrictions and detaining hundreds of activists and lawyers.