End of the line for mortgage rates below 1%

Mortgage rates below 1 per cent have all but disappeared following this month’s hike in the base rate by the Bank of England.

Figures from Moneyfacts show the lowest two-year tracker rate on offer is now 1.24 per cent, up from 0.99 per cent at the start of November in line with the 0.25 per cent rise.

Fixed rate mortgages previously available below 1 per cent had already risen in advance of the Bank of England rate decision.

This leaves just one mortgage priced below 1 per cent, a two-year discount rate at 0.99 per cent, linked to Furness Building Society’s 5.29 per cent standard variable rate, which may not last long.

Mark Carney, governor of the Bank of England, confirmed a rise in base rate to 0.5%

The cost of fixed rates rose as banks and building societies responded to their own higher cost of funding. Homeowners have been warned that prices could continue to rise, however, data provided to This is Money shows most homeowners could still save money at the end of their current deals.

Mortgage lenders could have opted to keep a lid on the pay rates on tracker mortgages and add a smaller margin above the base rate, but instead passed on the rise in full.

Charlotte Nelson, finance expert at Moneyfacts, said: ‘Mortgage providers have reacted quickly to the Bank of England’s base rate announcement on 2 November, with the majority having already increased their variable tracker rates.

‘In fact, not only has the average two-year variable tracker rate increased by 0.20 per cent since 1 November, but the sub-1 per cent two-year tracker is now no longer on offer to customers directly.’

A year ago the cheapest tracker rate available was 1.19 per cent.

Less than two weeks have passed since the Bank of England raised the base rate from 0.25 per cent to 0.5 per cent and homeowners are about to feel the financial pinch.

Santander confirmed last week that it would hike its SVR by the full 0.25 percentage points to 4.74 per cent from the beginning of December. Those on the old Alliance and Leicester SVR will see their rate stay at 4.74 per cent.

Mortgage rates are near record lows and if you are free to leave your existing deal, it may be a good time to lock in.

The best deal for you will depend on your circumstances.

This is Money’s best buy mortgage tool allows you to put in your property value, mortgage amount, and how long you want to fix for, to find the best rate you could apply for.

> Check the best mortgage rate you could apply for here

All of Santander’s tracker mortgage products linked to the base rate will increase by 0.25 percentage points from the beginning of December and Barclays hiked its 0.99 per cent two-year variable tracker rate by the full quarter per cent as well.

Tesco Bank, meanwhile, said it would raise its standard variable rate for mortgages by 0.15 percentage points from 1 February 2018.

Cheaper fixed rates, discount rates and tracker rates have also been quietly withdrawn by lenders in the past week, with replacement rates coming in around 0.2 percentage points higher.

Nelson said: ‘The very nature of variable tracker-rate mortgages means that as base rate rises, so will the rates on these deals. The quick reactions of providers only illustrates the extent to which the market had been prepared for the rise.

About to remortgage? Don’t panic

While the banks and building societies may be starting to raise mortgage rates, there’s no need to panic if you’re about to remortgage.

Data from Moneyfacts.co.uk requested by This is Money reveals that it’s very likely homeowners now coming to the end of a two, three or five-year fix will still be able to remortgage to a cheaper deal.

For example, while the average two-year fix taken out in November 2015 came with a rate of 2.67 per cent, today the average rate is just 2.34 per cent (see first table below). Similarly, the average three-year rate has fallen from 3.12 per cent to 2.6 per cent over the same period, as has the average five-year rate – from 3.3 to 2.86 per cent.

So yes, while it’s true that had you been able to remortgage last month to the very lowest rates available (see the bottom table below), you would have been slightly better off as rates have since risen, overall you’ll still be making savings compared to your existing fix. 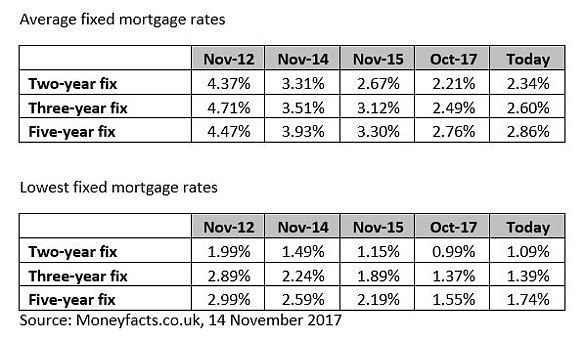 ‘SVRs have been slower to react, with many providers opting to review their rates thoroughly before announcing any increases.’

However, with the average SVR standing at 4.66 per cent today, these rates are already significantly higher than those on many other options available to borrowers today.

‘With some suggesting that another base rate rise could be on the cards next year, borrowers should perhaps consider battening down the hatches and opt for a fixed rate to secure their monthly repayments for a significant amount of time,’ said Nelson.

‘With rates likely continuing to rise they will need to act fast to secure the best possible option for them.’

Sarah Coles, personal finance analyst at investment firm Hargreaves Lansdown, warned homeowners not to be lackadaisical about locking into a new mortgage rate now if they were on SVR.

‘As a result of the rate rise, you might be spending £15 extra a month on the mortgage which doesn’t feel particularly difficult to handle, but at the same time prices are rising across the board.

‘You might not be worried by grocery bills going up £10 a month, a household bill rising £7, or council tax by £5 either but when you look at all these price rises together, they start to add up.

‘Over the course of a year, these small, gradual price rises are adding hundreds of pounds to our outgoings. If we haven’t changed our behaviour to take account of the rises, we could suddenly find ourselves with a significant shortfall, and no idea how it arose.’