Excessive consumption of energy drinks may be exacerbating PTSD and other mental health problems among soldiers, a new study finds.

A study published in the Military Medicine journal examined 627 male infantry soldiers seven months after a combat deployment and found one in six were still heavy energy drink users.

The researchers surveyed active duty U.S. soldiers from one brigade combat team after the soldiers returned from a 12-month combat deployment to Afghanistan.

Although the need for a caffeine boost in a combat zone is perfectly understandable, the study found that even seven months after returning from a deployment, energy drink use was still worryingly high.

A soldier is seen being handed an energy drink in a file photo. A new study examines energy drink use in the military and finds 16 pe cent drink more than two a day post-deployment

‘In the deployed context, the appeal of energy drinks is understandable given that there is substantial restriction in sleep as well as regular circadian disruption due to night-time operations; indeed, caffeine is a recommended option to sustain alertness in this environment,’ the authors wrote.

‘During the wars in Iraq and Afghanistan, energy drinks were often made readily available to deployed service members at no cost.’

Yet seven months after returning from Afghanistan, three quarters of the soldiers in the study reported consuming energy drinks in the past month, and 16.1 per cent reported ‘high use’, defined as two or more energy drinks a day.

That level of energy drink use was five times higher than a previous survey of Air Force personnel, and of the youth population in general, the study said. 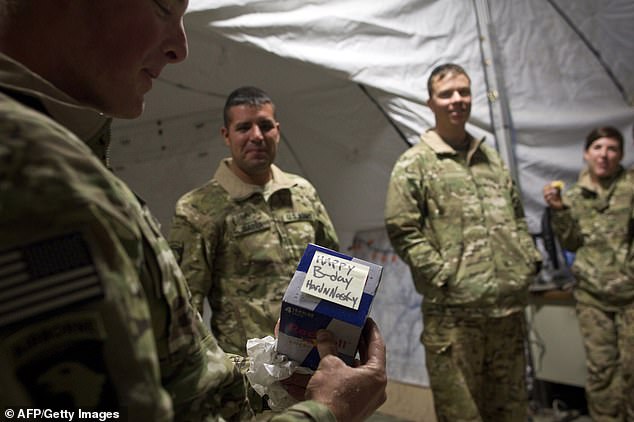 A soldier celebrates his 25th birthday with a gift of Red Bull from his comrades in this 2011 photo in Helmand Province, Afghanistan. The study suggests that soldiers should try to moderate their energy drink use after returning from a combat deployment

The researchers found that high use of energy drinks among the soldiers was ‘significantly related’ to mental health problems, aggressive behaviors, and – intriguingly – fatigue.

A key finding was that mental health problems such as depression, anxiety, PTSD and alcohol misuse were strongly associated with high levels of energy drink use.

Interestingly, energy drink use was also associated with fatigue.

It unclear whether the fatigue was caused by energy drinks or prompted their use, but the relationship suggested that ‘energy drink use may potentially exacerbate, rather than alleviate, fatigue,’ the authors wrote.

The study recommends that military leaders consider how to discourage overuse of energy drinks in the operational environment, and encourage moderation when returning for deployment.