Energy firm SSE hikes its electricity and gas prices by 6.7 per cent

SSE has become the latest energy firm to hike bills, saying wholesale price increases and Government policy was forcing it to raise tariffs.

The group is increasing electricity and gas bills by an average of 6.7 per cent, or £76 per year, in a move affecting 2.36 million customers.

The price changes will come into force on July 11, with a 5.7 per cent rise for gas and 7.7 per cent for electricity bills.

Energy company SSE is increasing electricity and gas bills by an average of 6.7 per cent

This will equate to an average increase of around £1.50 a week for customers buying both gas and electricity.

Stephen Forbes, chief commercial officer of SSE Energy Services, said: ‘We deeply regret having to raise prices and have worked hard to withstand the increasing costs that are largely outside our control by reducing our own internal costs.

‘However, as we’ve seen with recent adjustments to Ofgem’s price caps, the cost of supplying energy is increasing and this ultimately impacts the prices we’re able to offer customers.’

Claire Perry, energy and clean growth minister, said: ‘It is extremely disappointing that SSE has decided to announce this unjustified price rise – the highest yet from the Big Six – ahead of the new law coming into effect later this year.

‘Consumers should vote with their feet. Switching suppliers will always help consumers get the best deal.’

The price hike from SSE comes after Npower, EDF, British Gas and ScottishPower all raised prices.

More than nine million households will be hit when the tariff rises from the energy firms come into effect over the summer, which economists have said will likely push up inflation.

Energy companies have blamed the Government’s planned introduction of a cap on standard variable tariffs for increasing prices. 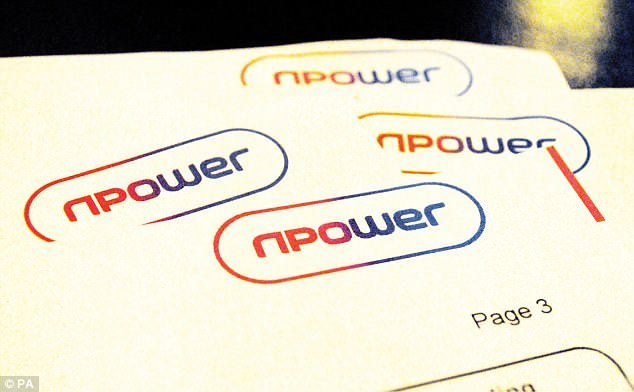 Npower, EDF, British Gas and ScottishPower have all raised their prices

Profits at SSE took a knock last year as it lost 430,000 customers and was stung by charges linked to the merger of its retail arm with rival Npower.

The group reported a 6 per cent fall in adjusted pre-tax profit to £1.45billion in the year to March 31, while bottom-line profits tumbled 39 per cent to £1.09billion.

The company was hit with more than £60 million in IT costs related to its Npower deal.

Claire Osborne, uSwitch.com energy expert, said: ‘SSE may be the last of the Big Six to increase its most expensive deal, but it certainly hasn’t been shy about it – hiking prices by nearly £90.

‘This is more than all the other big energy suppliers, with the company blaming rising wholesale and policy costs. Nearly 2.4 million customers who are already paying over the odds on standard variable tariffs will now be paying even more.

‘A whopping seven in ten SSE customers were on these eye-wateringly expensive tariffs at the last count, a higher proportion than any other Big Six supplier.’

Lily Green, campaigner for auto-switching service Look After My Bills, said: ‘SSE are the worst offender of the Big Six. This price rise is unjustified and downright unfair. Customers suffer once again at the hands of the Big Six.

‘It it clear from the data that there is simply no justification for another price rise, especially of this scale. Costs are lower now than they were at their peak at the end of 2016.’

And Martin Lewis, founder of MoneySavingExpert.com said: ‘Baaaaa. Yet again like sheep, with energy firms, when one moves the rest all follow. Yet the reality is they are wolves in sheep’s clothing.

‘Anyone on a Big Six standard tariff is ripping themselves off by failing to take action. Do-nothings pay massively more than the do-somethings.

‘Switch firm and you could cut bills to almost £800 a year, even with the same usage.’