Families are being told the digital devices are a legal requirement when they are not. Trading standards chiefs have told power firms that misleading customers in this way is a breach of consumer laws.

Households have been bombarded with texts, emails, letters and phone calls telling them they need a smart meter.

Citizens Advice reports a stream of complaints from harassed customers. One said: ‘These are obviously bullying tactics. You’d think you have no choice.’

A letter sent out by one supplier said: ‘We have a legal requirement to change your meter.’ In other cases engineers are dispatched even when the householder has repeatedly declined.

The £11billion cost for the roll-out is being passed on to customers through bills – at a cost of around £300 for every UK household. Yet those who have them installed are expected to save only £11 a year.

They’re not telling families the truth

Alfred Kaelin says he was bullied for months to get a smart meter.

The 79-year-old retired chemist said he received three or four letters – two of them just days apart – prompting him to have one installed.

One letter to him was titled: ‘Reminder: we need to change your meter.’

It then read: ‘Your electricity meter is an old model that we need to replace with our free self-reading smart meter.’

Another said: ‘Reminder: your meter is being phased out.’

None of the letters explained that customers did not have to agree.

Mr Kaelin, who lives with his wife Patricia in Pinner, north-west London, said: ‘I’m just ignoring the letters as I don’t want a smart meter.

‘But these are obviously bullying tactics. They are not letting customers have the true facts by failing to make it clear you don’t have to have one.

If you didn’t know they were optional you’d think you have no choice.’

Michael Coote, from Norfolk, said he received a similar letter last year, even though his meter was only four months old.

‘The letter was frightening and bullying,’ said the 74-year-old retired electrical engineer.

The Chartered Trading Standards Institute has written to Energy UK, which represents big suppliers, to raise concerns about the way firms are marketing the meters.

It warns they may be breaking regulations drawn up in 2008 to protect consumers from unfair trading if they create the false impression that customers have no choice but to switch.

‘Firms are getting more and more aggressive in the way they are marketing smart meters to customers,’ said the institute’s Steve Playle. ‘This letter is a shot across the bows. We will take further action if complaints continue to come in.’ 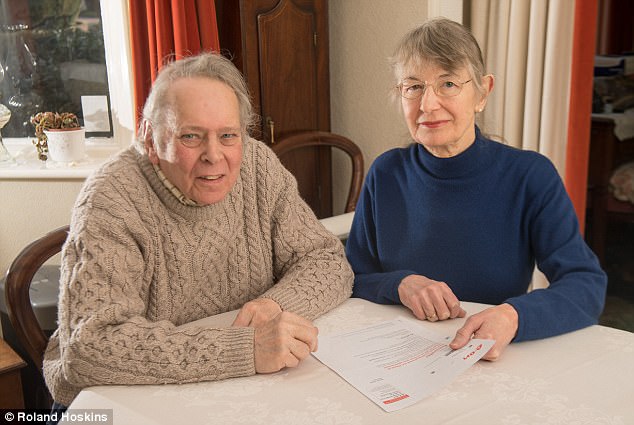 Alfred Kaelin who lives with his wife Patricia in Pinner, north-west London, says he was bullied for months to get a smart meter

Baroness Altmann, former pensions minister, said it was unacceptable for energy firms to mislead people and inflict ‘unnecessary hassle’. She added: ‘There should be proper penalties in place for firms which behave aggressively and break the rules.’

Victoria MacGregor, director of energy at Citizens Advice, said: ‘Smart meters are not compulsory and customers shouldn’t feel pressured to have one installed.

‘We appreciate suppliers are under pressure to install more meters but they have a responsibility to act reasonably toward their customers and not to use misleading or aggressive sales practices.’

Smart meters are controversial because their internet connectivity may make them vulnerable to being hacked by criminals or even foreign powers. There have also been reports that they interfere with other household devices such as baby monitors, while some studies suggest they make little difference to energy efficiency.

Power firms said the devices would help customers cut bills by showing them how much they were using – in terms of pounds and pence. They were supposed to reduce the average household’s gas and electricity costs by £26 a year.

But the Government has revised that down to just £11 because the cost of the nationwide installation of the devices has accelerated past £11billion. Eight million have been installed in homes and firms – under pressure from the Government. One in five homes has one fitted.

Mark Todd of the comparison site Energyhelpline said the Government had bungled the roll-out by doing it too quickly.

A spokesman for the energy watchdog Ofgem said: ‘It is not compulsory to have a smart meter installed – consumers have a right to decline them and suppliers must not mislead consumers.

‘Ofgem is working with suppliers offering smart meter installations to make sure their communications are transparent and accurate. They are allowed to use pre-booked appointments to install a meter, however customers can cancel or re-arrange these appointments.’ A spokesman for Energy UK said the body was in contact with trading standards chiefs.

He added: ‘Energy companies will be adopting various methods of communication with their customers to increase engagement and enable as many people as possible to experience the benefits smart meters bring.’

Robert Cheesewright, of Smart Energy GB, the independent group set up to oversee the smart meter programme, said: ‘The roll-out will benefit everyone by bringing down energy bills, upgrading our national grid and delivering savings of £6billion to the British economy by 2030.’