Engadine shooting: Man, 81, shoots himself dead after opening fire on a 56-year-old man

Pensioner, 81, shoots himself dead after opening fire on a 56-year-old man ‘in failed murder-suicide’ in a quiet Sydney suburb

A pensioner has shot himself dead during a police standoff after he opened fire on another man at a home in Sydney’s south.

The incident unfolded at a property in Engadine on Friday morning, with neighbours reporting sounds of gunfire at about 7am.

Police said a shot was fired at the front door of the home, striking a 56-year-old man in the forehead.

Emergency crews rushed to the scene and found an 81-year-old man attempting to flee in a car.

‘The man pointed the firearm at the police officers when challenged by them,’ police said in a statement.

‘He then discharged the firearm, suffering a self-inflicted gun-shot wound, to his neck.’

The man was unable to be revived and died at the scene.

Police described the 56-year-old man’s gunshot wound as ‘minor’ and said he was treated at the scene by Ambulance paramedics.

‘We heard a loud bang but we didn’t know if it was a car or a gun,’ a neighbour told the St George Shire Standard.

‘Around here we don’t know what a gun sounds like, it’s not Merrylands.’ 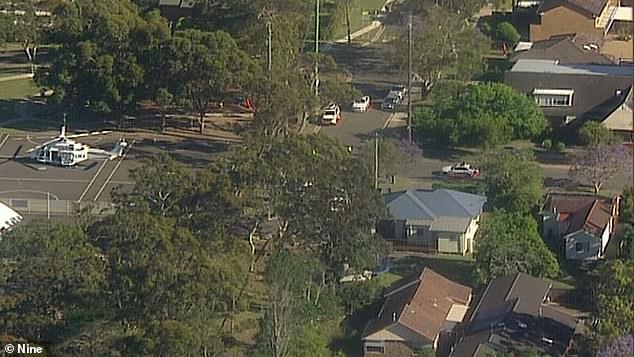 Emergency crews rushed to a home in Engadine at about 7am on Friday, responding to reports of gunfire following a domestic dispute