If you were looking for hot- stepping, glitter-ball entertainment, you would have been better switching over to Strictly Come Dancing. The opening tango between Owen Farrell and Marcus Smith did not quite live up to its billing. Sixes all round. No John and Johannes.

There was enough early promise to get through to week two, subject to Farrell’s ankle injury, but the partnership still has a way to go.

England scored just two tries — one from a turnover in the very last play — and need to work on holding their form to overcome the Springboks. 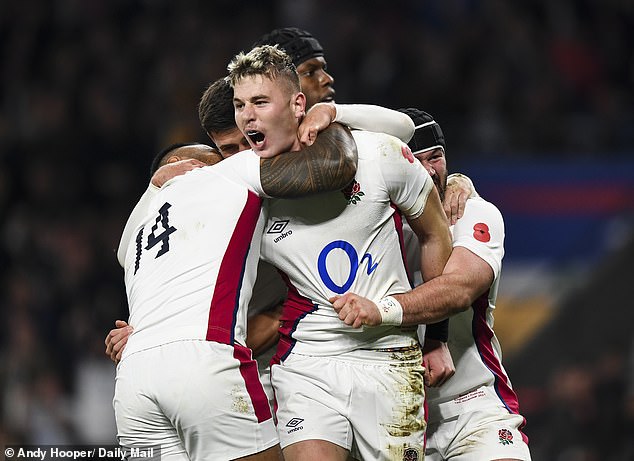 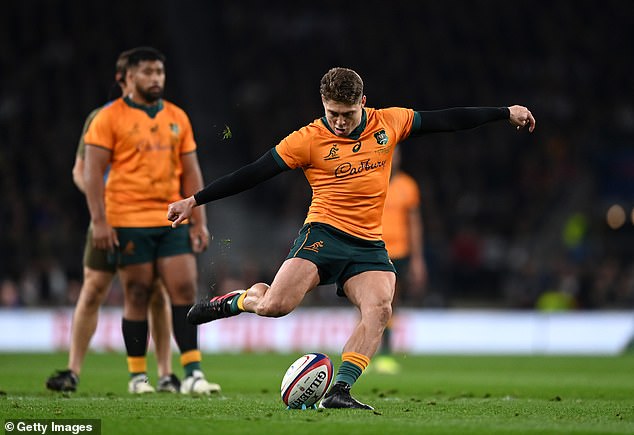 In the early exchanges, it looked like the perfect first dance. A masterclass in attacking choreography, before England quickly lost their feel for the beat. The fans arrived at Twickenham desperate for the Smith-Farrell axis to work. Their new No 10 was the talk of the trains into west London.

For once, there is someone other than Eddie Jones dominating the conversations around English rugby. For six years, Jones has been the chief headline maker, effectively the face of the team, win or lose.

Now there is another personality who has captured the attention of the public. With eight minutes on the clock, Smith and Farrell switched roles at first receiver.

Sam Underhill made a powerful dent in the defence, leaving gold shirts scrambling. Manu Tuilagi stepped off his wing to attract the attention of the wide defenders, before Smith popped the ball to Freddie Steward. The full-back cut the perfect line to score a try loaded with promise. ‘The first try we scored was one of the best I’ve seen from an England side,’ said Jones. ‘Our handling and the lines we were running to hit the holes was absolutely outstanding.

‘It is not going to happen all the time but it was really promising from those Marcus and Owen. They are a bit like two opening batsmen who haven’t batted together and are facing the new ball for the first time. Every time they bat together after this they will be better.’ 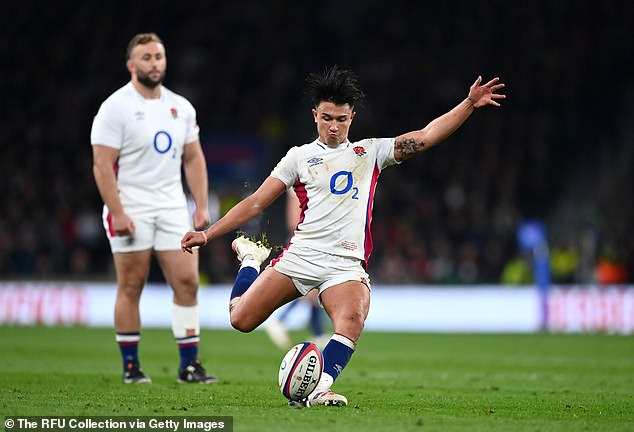 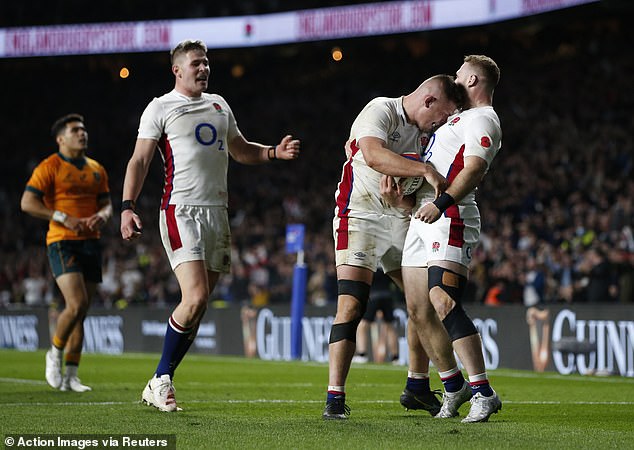 England’s new-look chariot went from nought to 60 in no time at all, but it soon hit a pothole. They conceded penalties all over the park. They were hustled at the breakdown, pinged at scrum and done for clumsy blocking lines.

James O’Connor took full advantage and kicked 12 points inside the first half, resulting a scoreline that barely reflected the run of play.

England’s lead should have been into double figures by half time.Their attacking play looked forced, firing blanks at a Wallabies side missing five of their best players. Following a promising break, Henry Slade ate up the space for Jonny May on the left wing, before Jamie George had the ball dislodged from his clutches by Nic White as he dived over the line. A display that started with such promise slowly fizzled out.

Perhaps England would have been better off with two natural wingers, but Jones defended his decision to start Tuillagi in the No 14 shirt.‘Unfortunately we’ve got to put numbers on the back,’ he said. ‘I’d prefer the basketball system when you pick a number at the start of the year and stick to that. It’s rare you get a 12 who passes to a 13 who passes to a winger. Numbers are fairly archaic.’

One startling number was Australia’s penalty count. If England’s discipline was bad, Australia’s was even worse. The visitors spent a quarter of the game playing with 14 men, with Tom Wright and Angus Bell shown yellow cards for dangerous tackles.

With a one-man advantage, it was the perfect opportunity for Jones’ playmaking ensemble to get the ball wide to score, but it was more crash, bang wallop as the hosts lost the 20-minute period 6-0.

While last week’s opener against Tonga felt like an undercard, this was a big-ticket Test match. Two years out from the World Cup, it was a night when Jones pressed the reset button. Steward looked every inch like he is here to stay in the No 15 jersey, showing an assuredness under the high ball that England have not seen for several years. 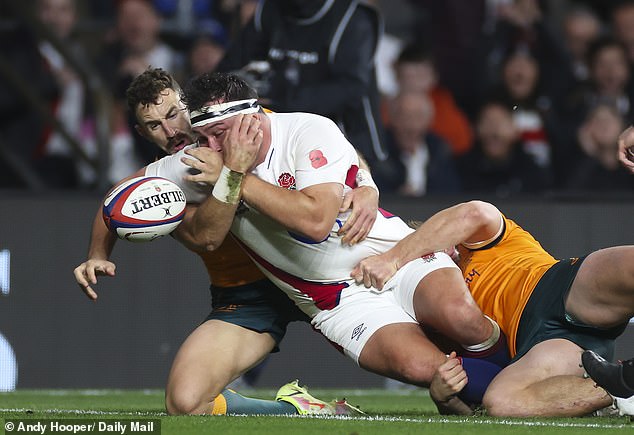 ‘Freddie has got a good head on him,’ said Jones. ‘He wants to improve and has good awareness where players are. He is good in the air, brave and I haven’t seen an England full-back as courageous as him since Mike Brown.’

Jones saved his most emphatic praise for debutant prop Bevan Rodd, although the set piece never looked steady for either side.

O’Connor and Farrell continued to exchange penalties through the second half, with the game stopped and started by the referee’s whistle. England lost George to injury at half time, before their captain limped off after 68 minutes.

Farrell said: ‘I am OK, I got a bang on my ankle and see what it turns up. See how it goes.’

His withdrawal forced England to field the Smith, Tuilagi, Slade midfield partnership that had been widely touted. Sam Simmonds and Jamie Blamire combined to score a breakaway try in the final play.

It wrapped up an eighth straight victory over the rivals from down under, but if the performance does not improve against South Africa next week, it could be a case of murder on the dancefloor. 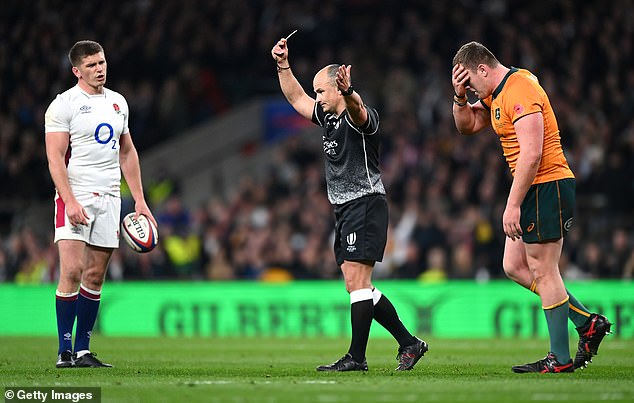 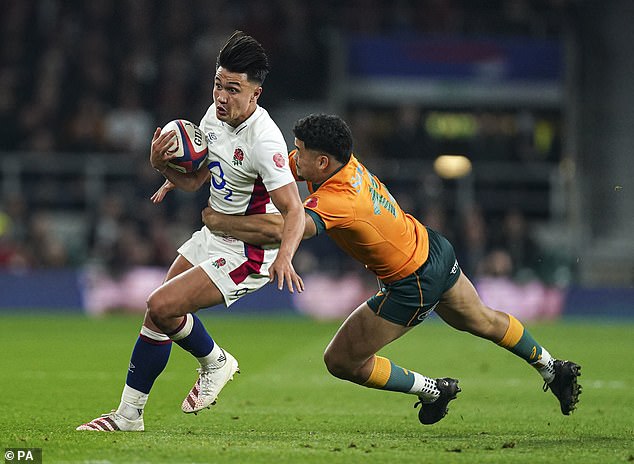