Jason Roy has revealed he had to rush his baby daughter to hospital after she appeared ‘lifeless’ ahead of the England opener’s century against Pakistan last week.

Roy smashed 114 from 89 balls to help England a series win ahead of the World Cup, but went into the match with only two hours sleep after he and his wife Elle spent the night in hospital at little Everly’s bedside.

‘It was very scary,’ Roy told The Sun. ‘She’s only eight weeks old. My missus came into the hotel room in Nottingham at 1am. Everly was throwing up, quite lifeless and we couldn’t keep her awake.

‘We called the emergency number and they said we should try to keep her awake – but she kept falling straight back to sleep.

‘She seemed lifeless, which was a real worry. So we took her to child A&E in hospital in Nottingham. They’re such good people and looked after us really well, did tests and everything until about 8.30am.

‘I went to the hotel at around 9am and got a couple of hours sleep before going to the ground.

‘Everly’s doing a lot better now. It was a stomach infection and a bit of a fever. She’s back home and we’ve had a couple of smiles out of her.’

Roy’s century, coming on the back of two half-centuries, saw the Surrey batsman named Man of the Series. 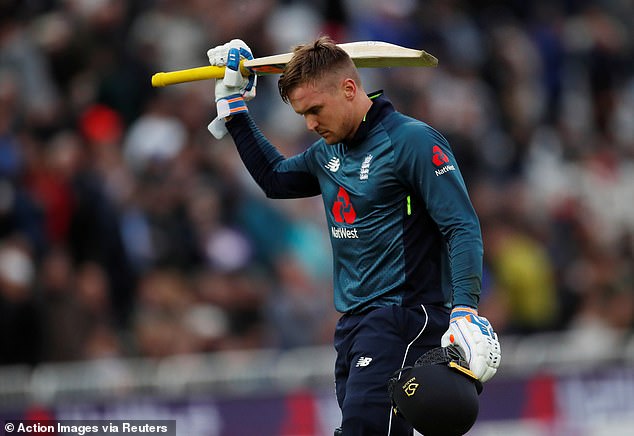 ‘It gave me extra motivation for that innings,’ he said. ‘I’d come off the back of two decent scores but hadn’t converted them into hundreds.

‘Weirdly, I wasn’t tired during the innings. I had some treatment from the medical staff, some coffee and food and I think adrenaline got me through.

‘My wife told me to play. She was incredible throughout the whole thing so I knew she had it under control. I could go out and do my job.’