England had the highest level of excess deaths in Europe over the coronavirus pandemic, new figures have revealed.

An interactive map shows the excess mortality rate for every region in the country and shows Birmingham was worst-hit city in UK during crisis.

By the end of May, England had seen the highest overall excess deaths — fatalities from all causes that are above the level that would normally be expected — out of 21 European countries compared by the Office for National Statistics.

Scotland, Wales and Northern Ireland were all among the nine nations that have seen deaths soar above typical levels.

While other countries had higher spikes in excess deaths between February and June, called ‘peaks’, England had the longest continuous period of elevated mortality rate – meaning it had the highest level of excess deaths overall.

Excess deaths include fatalities from all causes, but they can be used as evidence of how severe coronavirus outbreaks have been – because not all deaths caused by the virus are recorded by authorities.

It was Spain and Italy that suffered the largest spikes in excess deaths, suggesting they faced the toughest weeks out of all the nations in the continent.

Bergamo, one of the first places in Europe to go into lockdown, had the highest peak in excess mortality. It saw a staggering 847.7 per cent more deaths than usual in the week ending 20 March.

The UK’s highest peak of excess deaths was recorded in Brent, at 357.5 per cent at the height of Britain’s crisis, in the week ending 17 April. 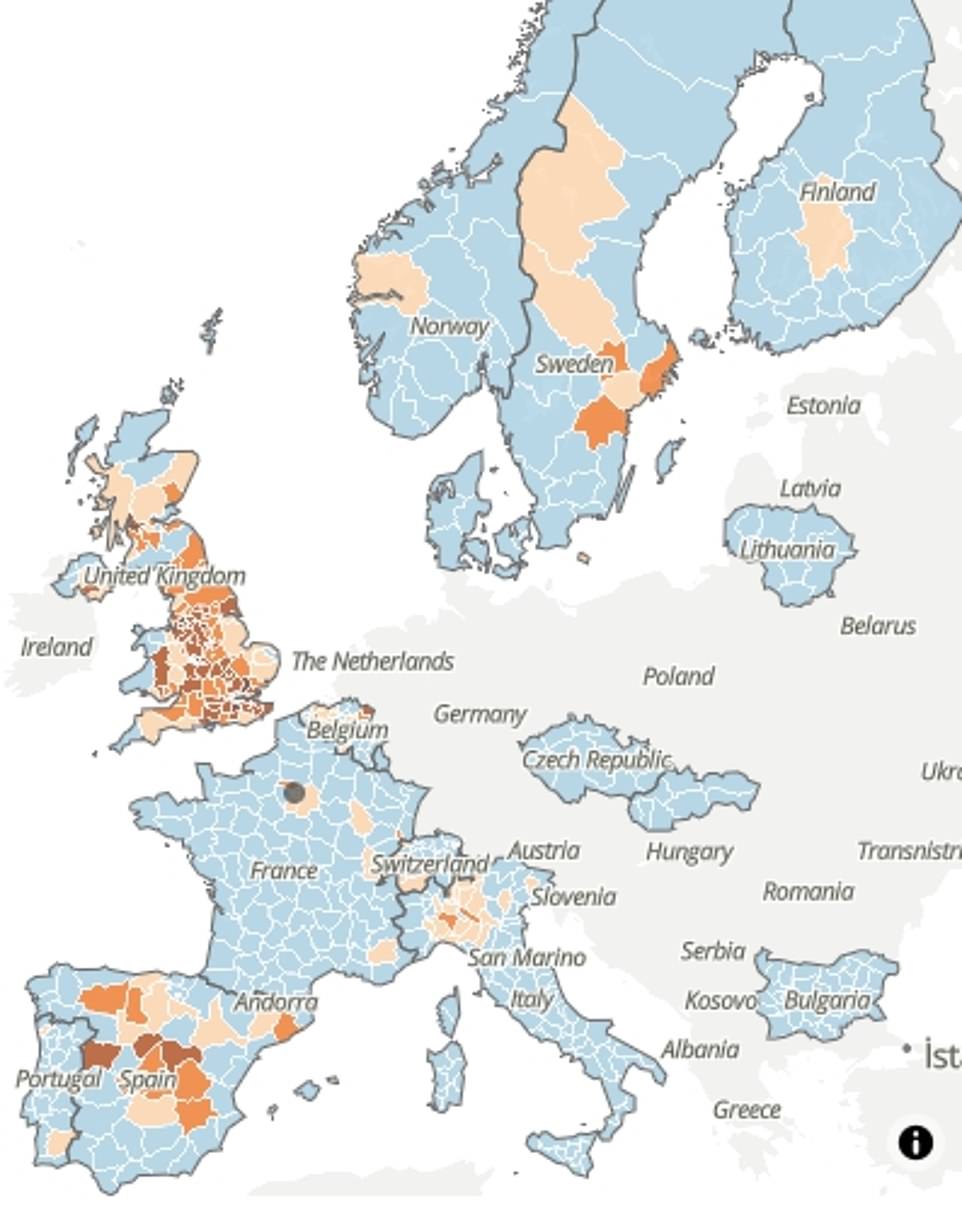 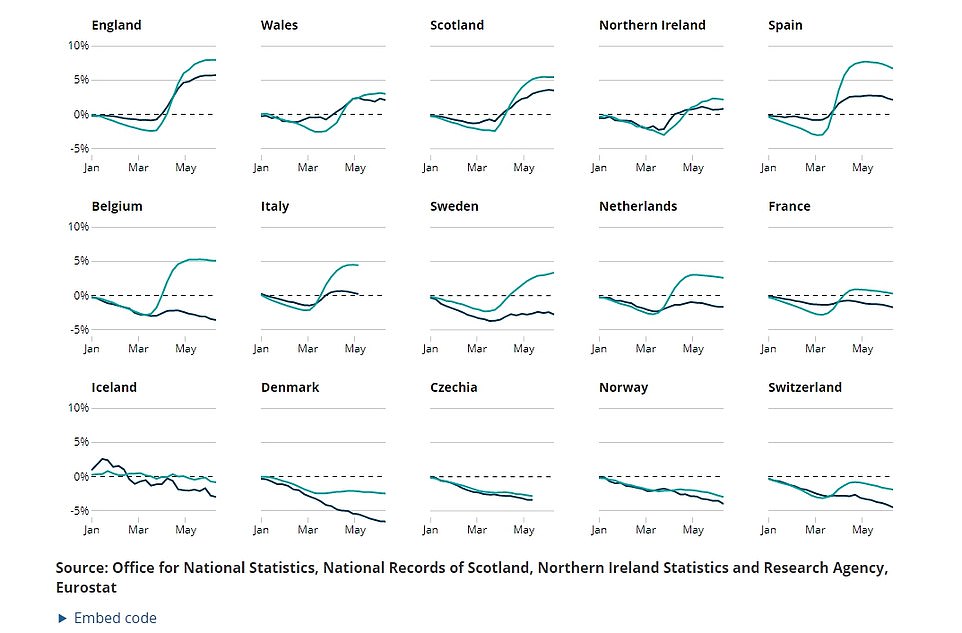 By the end of May, England had seen the highest overall relative excess mortality out of 21 European countries compared by the Office for National Statistics. But the hardest hit nations were Italy and Spain which suffered the largest spikes 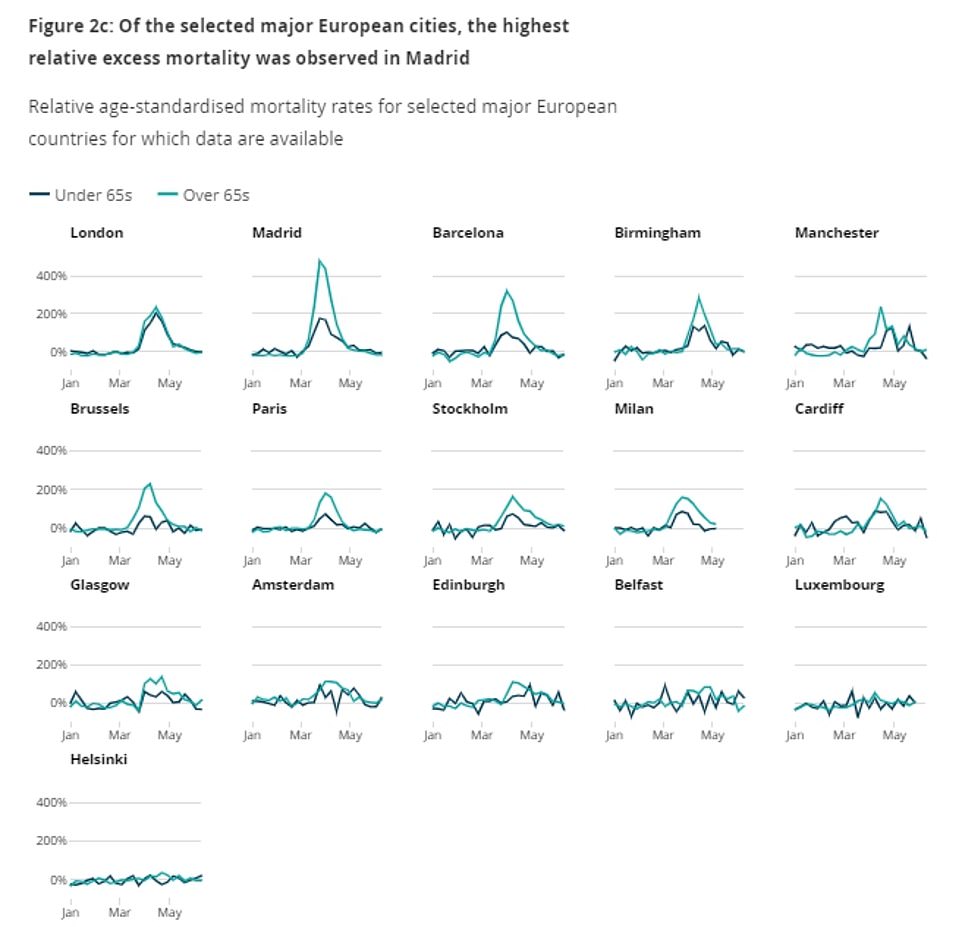 Edward Morgan, Health Analysis and Life Events, ONS said: ‘Due to the coronavirus pandemic, the first half of 2020 saw extraordinary increases in mortality rates across countries in Western Europe above the 2015 to 2019 average.

‘The highest peak excess mortality at national level was in Spain, with some local areas in Northern Italy and Central Spain having excess mortality levels as high as 847.7 per cent of the average.

‘While none of the four UK nations had a peak mortality level as high as Spain or the worst-hit local areas of Spain and Italy, excess mortality was geographically widespread throughout the UK during the pandemic, whereas it was more geographically localised in most countries of Western Europe.

‘Combined with the relatively slow downward “tail” of the pandemic in the UK, this meant that by the end of May, England had seen the highest overall relative excess mortality out of all the European countries compared.’

The ONS analysed all-cause mortality patterns during the first half of 2020 for 29 European countries using data between January 3 (Week 1) to the week ending June 12 (Week 24).

Comparisons were made nationally, in cities and local areas — which in England are local authorities such as Buckinghamshire, Rutland and Norfolk.

The analysis of all-cause mortality allows experts to picture the impact of the coronavirus pandemic not only from deaths involving Covid-19, but also excess deaths that have occurred as an indirect result.

The wider impacts of the coronavirus on healthcare systems and society means people have died that were not expected to. For example, someone who suffered a heart attack may have decided not to go to hospital, delaying their care and leading to death. 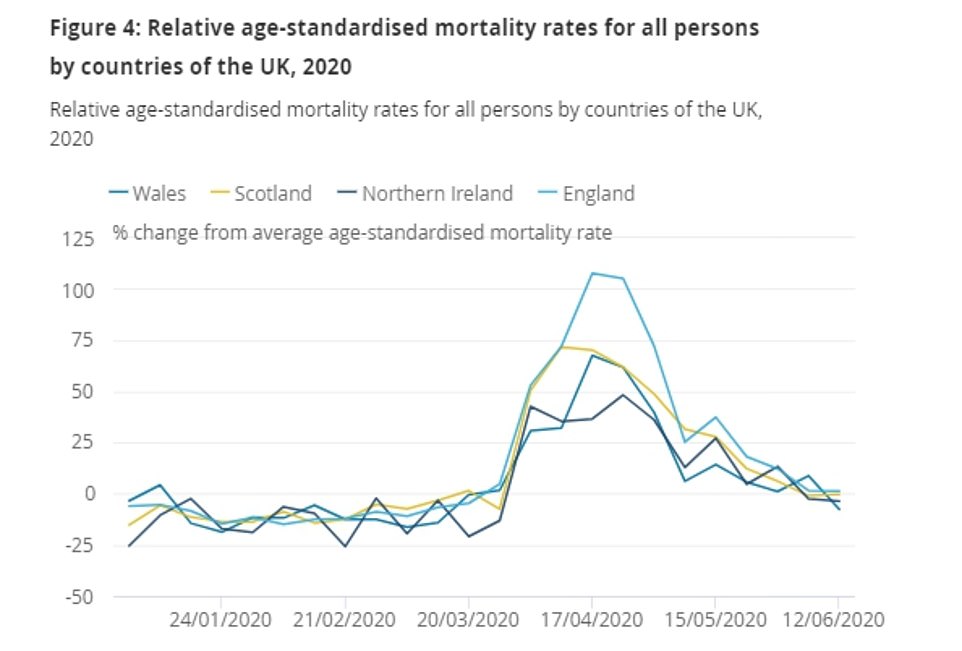 By the end of May, England had seen the highest overall excess deaths — fatalities from all causes that are above the level that would normally be expected — out of 21 European countries compared by the Office for National Statistics. Scotland, Wales and Northern Ireland were all among the nine nations that have seen deaths soar above typical levels

WHICH COUNTRIES HAVE HAD EXCESS DEATHS?

Total excess deaths in percentage up until the week ending May 29 across all ages:

Experts say the best way of measuring the scale of the impact of Covid-19 is by looking at excess deaths.

The ONS compares how many deaths have occurred in a period compared to the five-year average in that nation.

A value of 100 per cent indicates mortality rates were 100 per cent higher than — or double — that of the five-year average in a given week.

By the end of May, there were nine countries which had seen excess deaths rise during the pandemic.

England had experienced the most, with 7.55 per cent more deaths compared with the five-year average, the highest of any country. This was both in those under the age of 65 (5.65 per cent), and over the age of 65 (7.88).

Following England, the three countries with the highest cumulative excess mortality were Spain (6.65 per cent), Scotland (5.11 per cent), Belgium (3.89 per cent).

Only the UK and Spain saw excess deaths in those under the age of 65 shoot above zero by the end of May.

Nine countries — which also include Belgium, Sweden, Netherlands and France — had values in excess of zero for their over 65 population.

The elderly are the most vulnerable to severe Covid-19 which would have been felt in older populations worldwide. As for deaths indirectly caused by Covid-19, these could have been a result of reduced access to healthcare for other conditions.

The figures show that England saw the second highest national peak of excess mortality from the week ending February 21 to week ending June 12 compared with 21 European countries, with only Spain seeing a higher peak.

The peak of excess is the point at which the highest level of excess deaths were recorded in one place during the pandemic.

Of the four nations of the UK, England had the highest peak excess mortality, at 107.6 per cent in week ending April 17.

Spain saw the highest peak of excess mortality on a nation level, at 138.5 in the week ending April 3.

Looking at major cities, the highest peak excess mortality was in Madrid at 432.7 per cent in the week ending March 27.

Meanwhile in the UK, Birmingham had the highest peak excess mortality of any major British city at 249.7 per cent in the week ending April 17. The Midlands city grappled with some of the highest hospital admissions of Covid-19 in Europe.

At  the local authority level, excess deaths throughout the first half of 2020 varied both between and within countries.

The first 11 authorities with the highest excess peaks were all in Italy and Spain during March, with Bergamo reaching 847.7 per cent.

At the peak of their respective epidemics, the following had the second, third and fourth highest rates respectively: Cremona (Italy) at 617.7 per cent; Segovia (Spain) at 600.6 per cent; and Ciudad Real (Spain) at 532.3 per cent.

Among the top 20 areas are four areas of the UK, of which three are in London and one in Essex, South East England.