England purchased more drugs on the dark web than any other country in the world except Finland, figures show.

More than one in four recreational drug users admitted ordering substances on the encrypted network in the last 12 months.

It marks a four per cent jump in dark web purchases compared with 2018, according to the study looking at more than 120,000 substance-users worldwide.

The most popular drugs ordered on the dark net were MDMA, LSD and cannabis, followed by amphetamines such as speed and ADHD medication Adderall.

More than one in four recreational drug users purchased substances on the dark web in the last year, according to figures from a global survey looking at more than 120,000 people

Although less common, large increases were seen in the purchase of psychedelic drugs including DMT, ketamine and 2-CB over the last five years, the Global Drug Survey found.

England came only second to Finland, where almost half – 45.2 per cent – of the drug-using population said they’d bought illegal substances from the dark web.

Elsewhere, the number of purchases on the dark web plummeted from 18.1 per cent to 11.9 per cent in the US – following a crackdown on online drug dealers by the FBI.

The same survey also found England’s MDMA users to be some of the world’s biggest dosers, taking 40 per cent more on a single day of use than the global average.

Users in England take half a gram of MDMA powder – or 1.4 pills – compared to 0.3grams and one ecstasy pill globally. 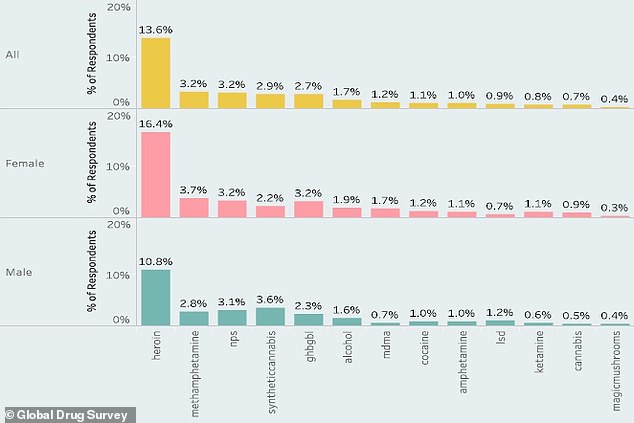 But most consumers use the drug infrequently, with the average being seven days a year. In England, the average is 10 days per year.

The survey also found that England has the highest rate of people who have tried cocaine in the world.

In England, 74 per cent of participants reported having used cocaine at some point in their lives, compared with 43 per cent globally.

Use of the drug in the past year among people from England who responded went up from 43 per cent in 2018’s survey to 64 per cent this year.

WHAT IS THE DARK WEB?

The dark web is part of the internet that isn’t visible to search engines and requires the use of an anonymising browser called Tor to be accessed.

Tor – short for The Onion Router – is a seething matrix of encrypted websites that allows users to surf beneath the everyday internet with complete anonymity.

It uses numerous layers of security and encryption to render users anonymous online.

Normally, file sharing and internet browsing activity can be tracked by law enforcement through each user’s unique IP address that can be traced back to an individual computer.

The Tor network hides the IP address and the activity of the user.

Most of the Web’s information is buried far down on dynamically generated sites, unable to be found or seen by traditional search engines – sites or pages don’t exist until created as the result of a specific search.

An Internet search is like dragging a net across the surface of the sea – a great deal of information is caught, but a majority is deep and therefore missed.