The unlucky blackcaps! England take a wicket TWO BALLS after being told DRS wasn’t working against New Zealand… with Tom Blundell unable to review his lbw decision due to the technology outage

By Liam Morgan For Mailonline and Pa Sport

England took full advantage of the technology going down in the morning session of the second day of the third Test against New Zealand as Matthew Potts had the dangerous Tom Blundell trapped lbw just two balls after players were informed.

New Zealand were left cursing their luck, with Blundell unable to review the decision from umpire Richard Kettleborough as DRS was unavailable at Headingley due to a technical fault.

The wicket fell at 11:25am local time and just 15 minutes later the technology was back working. 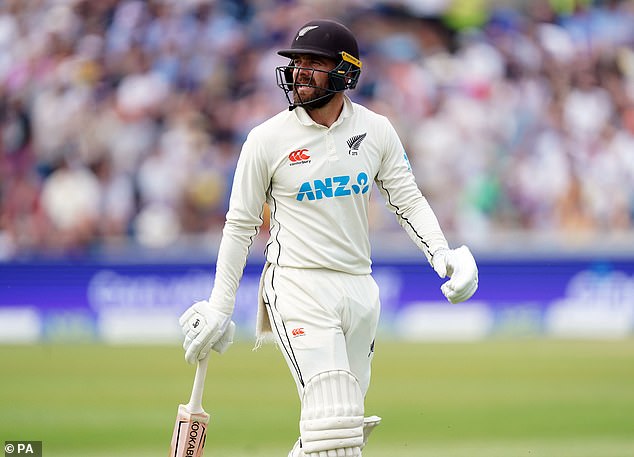 It is not yet known whether Blundell, who made 55 before departing to end a 120-run stand at 243-6, would have been successful with a potential review as ball tracking was unavailable at the time.

Blundell was Potts’ first victim of the match after he had missed out on a clear lbw against Daryl Mitchell on day one when Ben Stokes declined to review the appeal.

England could have taken more wickets in the first hour of play but they dropped both Mitchell and Michael Bracewell. 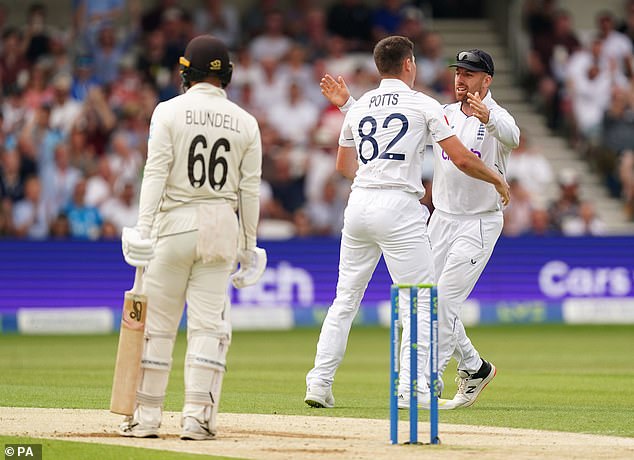 The wicket was just reward for Potts, who bowled superbly in the first hour of day two in Leeds

Potts drew an edge from Mitchell that appeared destined for the hands of Joe Root at slip but wicket-keeper Ben Foakes instead went for it and put the ball down.

Stuart Broad had to wait for his chance to get hold of the ball on his 36th birthday, replacing debutant Jamie Overton, but almost struck in the first over of his spell for the third time in the match.

Having done so twice on day one he saw all-rounder Bracewell poke at his sixth delivery, only for Jonny Bairstow to grass a one-handed attempt at third slip.

Potts’ wicket was the latest slice of luck for England after the freakish dismissal of Henry Nicholls on Thursday.

Nicholls thudded a straight drive that ricocheted off the bat of Daryl Mitchell at the non-striker’s end and into the hands of a gleeful Alex Lees at mid-off.

Jack Leach, who bowled the delivery, admitted later that he did not know that was allowed.