England’s coronavirus outbreak is shrinking but only slowly, according to official statistics published today.

Data from the Office for National Statistics has published its lowest estimates yet of the number of Covid-19 cases spreading in the general population.

It said around 1,700 people are catching the virus each day – not including patients in hospitals or care homes – and there are a total of just 14,000 currently sick with it.

However, the estimates are based on a tiny sample of just eight people testing positive in the ONS’s group of 25,662 who get swabbed regularly.

Separate data, from King’s College London, suggests the outbreak in England has stopped shrinking – but its estimate is lower than the ONS’s at around 1,200 per day.

The Department of Health has announced an average of just 546 new positive test results per day for the past week, with 630 confirmed yesterday. 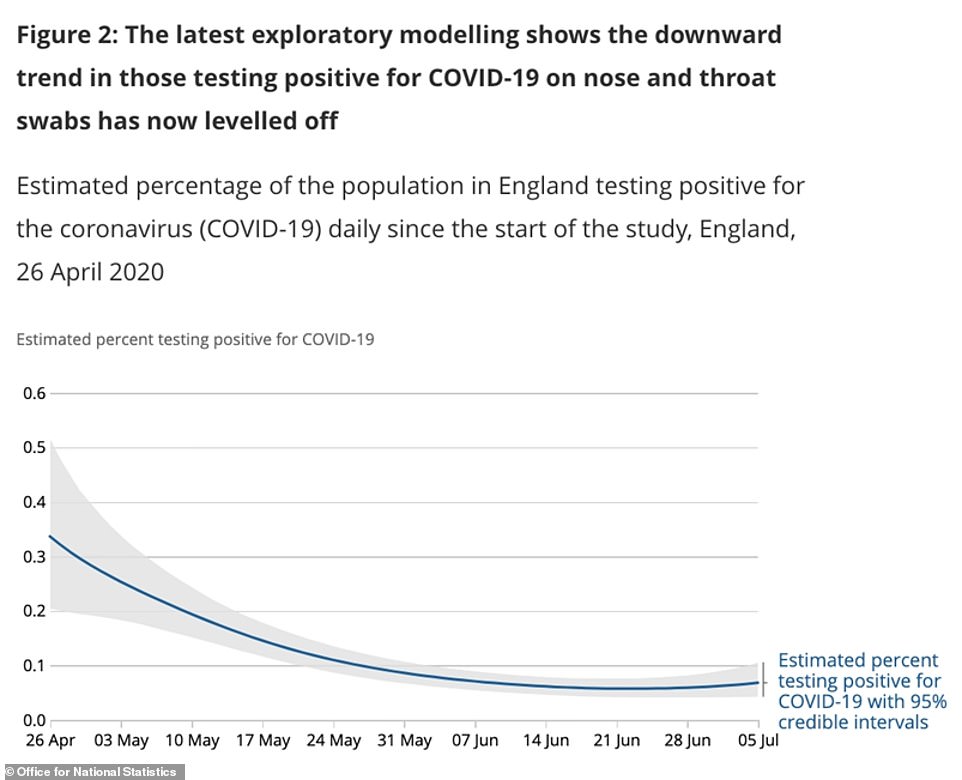 Although the ONS’s data shows a downward trend, the organisation says the decline in cases of coronavirus – which was noticeable in May and June – has levelled off.

Today’s report said: ‘When analysing data for the most recent non-overlapping 14-day periods, these estimates suggest the percentage testing positive has decreased over time since April 27, and this downward trend appears to have now levelled off.

‘Over the last three 14-day periods, the variation in the percentage testing positive is consistent with random variation based on sampling.’

The ONS’s data appears close to hitting the bottom of the range where it can accurately predict the prevalence of Covid-19 in England without doing more tests.

It tested almost 26,000 people for this week’s data but only eight of them tested positive. As the numbers stay smaller the margins of error grow larger.

Separate data, collected by the COVID Symptom tracker app, run by King’s College London and the healthcare tech company ZOE, which suggests the curve of England’s outbreak is flat.

The app, which uses data from people self-reporting their symptoms and test results, predicts that 1,228 people per day are catching Covid-19 in England.

This was a tiny rise from 1,225 it predicted last week. The Midlands makes up the biggest single proportion of cases, it said.

An estimated 363 people per day were catching it in the beleaguered region, which contains Leicester, the only place in England to have a local lockdown so far.

After that there were 252 people catching the virus each day in the North East and Yorkshire, the data suggested, along with 214 in the South West, 203 in London, 153 in the South East, 102 in the North West and 0 in the East of England.

Professor Tim Spector, a King’s College epidemiologist who set up the app project, said: ‘It is disappointing to see that the number of daily new cases are no longer falling like they have been in previous weeks.

‘This could be a temporary blip or due to the easing of lockdown and the amount of social contact slowly increasing.

‘Importantly, our updated analysis of the prevalence is still continuing to show that the Midlands and Wales are key areas in the country where the amount of Covid is remaining relatively high. It is important that we keep a close eye on these areas.

‘With the growing number of people suffering for extended periods of time, we are going to be focusing on these long term sufferers to help us research causes and potential treatments.

‘But in order for this to be possible, we need all our users to continue to log in, even if they have been ill and have got better.’

The latest prevalence figures from the app data estimate that 23,459 people in the UK currently have symptomatic Covid-19.

This was on par with the ONS’s estimate last week, but that has now dropped to just 14,000. This includes people without symptoms, which the app data doesn’t.

The ONS report suggests there are no definite differences in diagnosis rates between different regions of the UK.

While the data suggests there are more people testing positive in London and the East of England, the possible ranges are so wide that all areas overlap – this means there is no statistically significant difference. 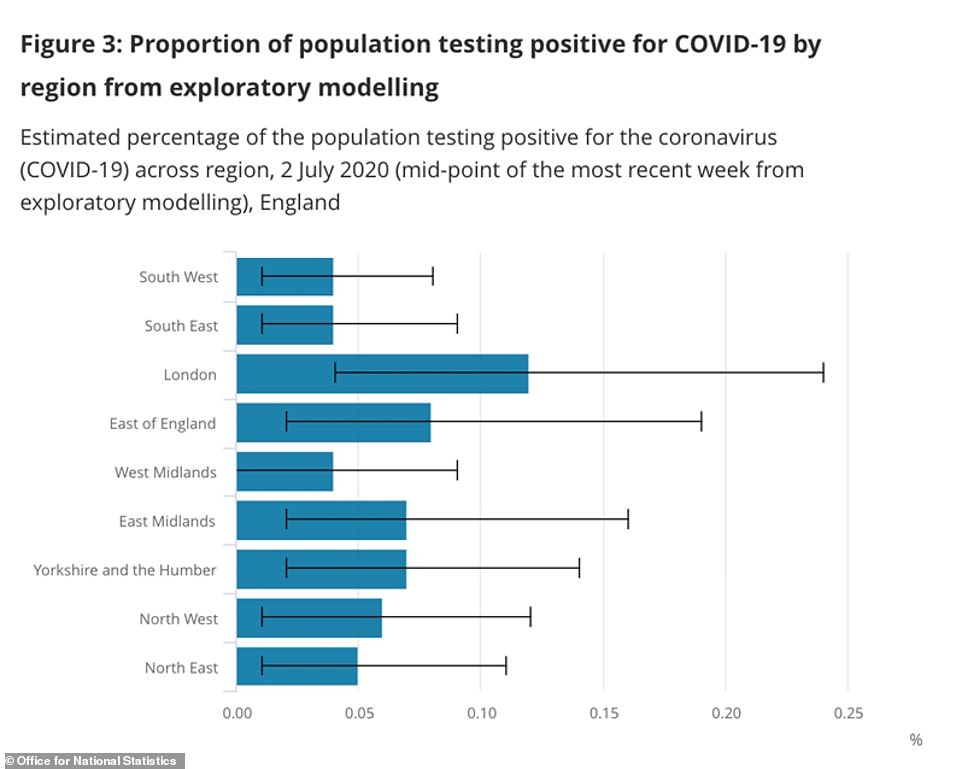 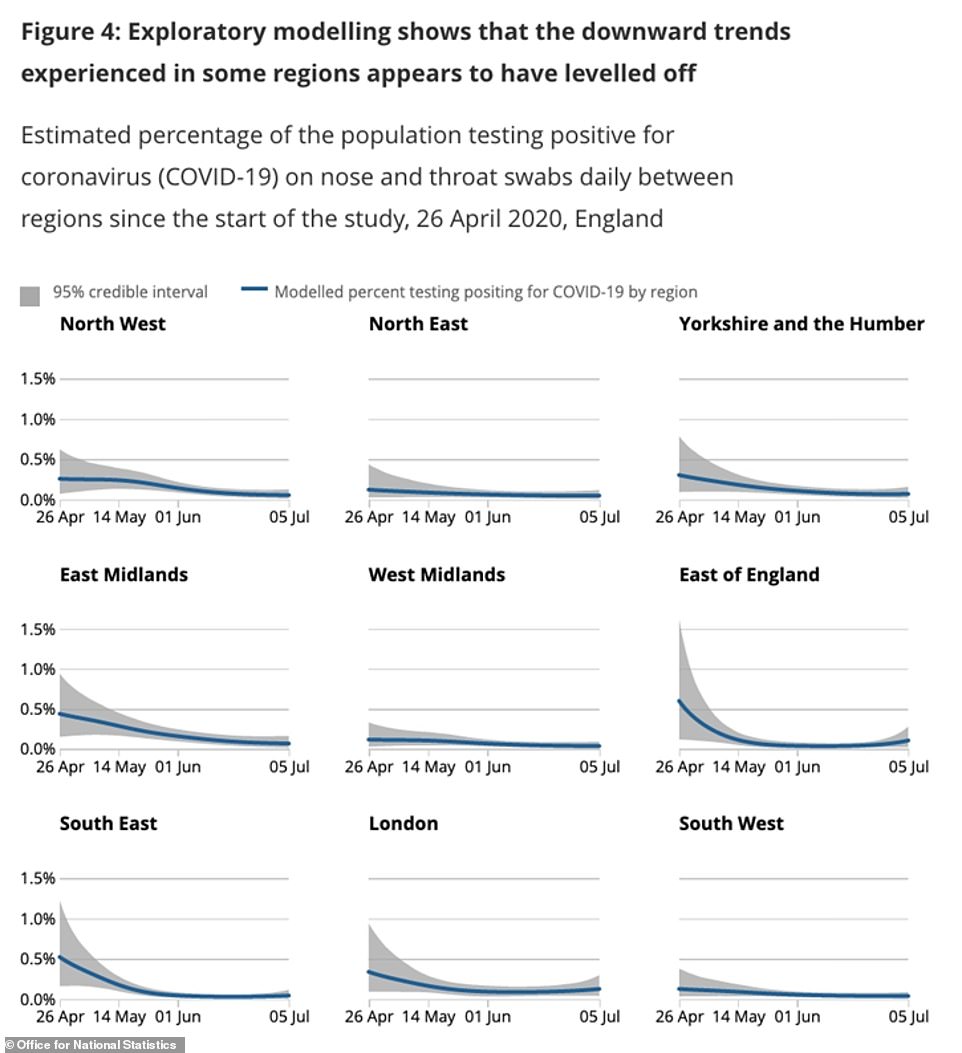 The ONS report takes its estimates from the period between June 22 and July 5, when the tests were done.

This takes into account some of the relaxed social distancing measures, such as reopening shops and allowing people to meet up in groups of six outdoors, but not the pubs reopening or indoor meetings from last week.

If the data remains stable this could mean that loosening the lockdown has not dramatically contributed to the spread of the virus, as many feared it would.

Possible ranges written into its data suggest that the number of people currently infected could be as low as 5,000 or as high as 31,000. And the new daily infections is somewhere between 700 and 3,700. 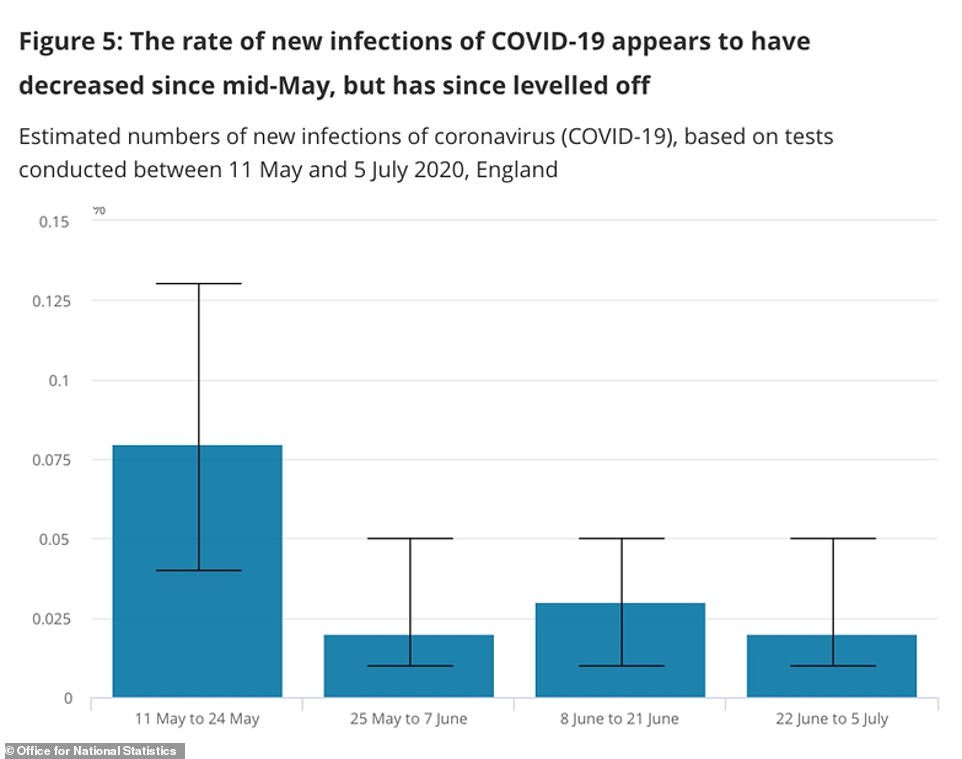 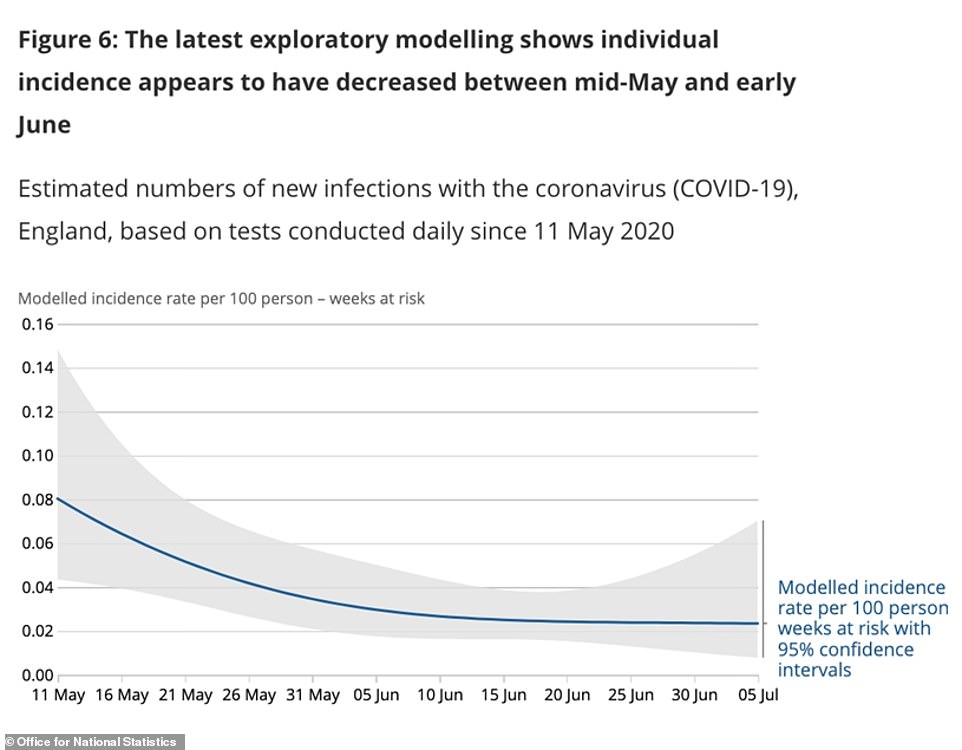