LUNCH REPORT: England’s first Test against Pakistan is in the balance with the hosts on 169-3 after Shakeel and Rizwan dominate against spinners to lead the fightback on the final day – as they chase 343 for an unlikely win

The first Test remained in the balance at lunch on the final day after a morning of two halves in Rawalpindi.

Set 343, Pakistan had reached 169 for three, with Saud Shakeel on 63 on his Test debut, and an increasingly assertive Mohammad Rizwan on 42.

Azhar Ali is expected to bat, despite a painful blow on the finger last night from Ollie Robinson. They need another 174. 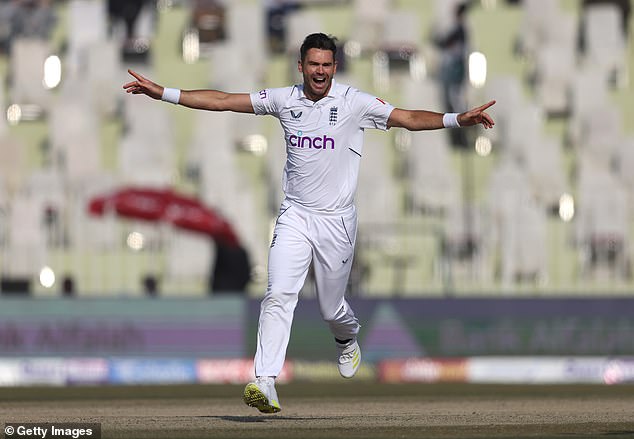 The first hour had been all England, as Pakistan resumed on 80 for two. Imam-ul-Haq and Shakeel traded boundaries in the first two overs, though there was playing and missing too against Robinson and Jimmy Anderson.

The pitch remained lifeless, but Pakistan went into their shell, and a sequence of 18 dot balls ended when Imam was caught behind down the leg side off Anderson for 48 – his first score of below 100 in his four Test innings at this venue.

That made it 89 for three, prompting Pakistan to entrench even further.

By the time drinks were taken after the first hour, they had added 13 runs in 14 overs, encouraging thoughts that they had already settled for a draw. 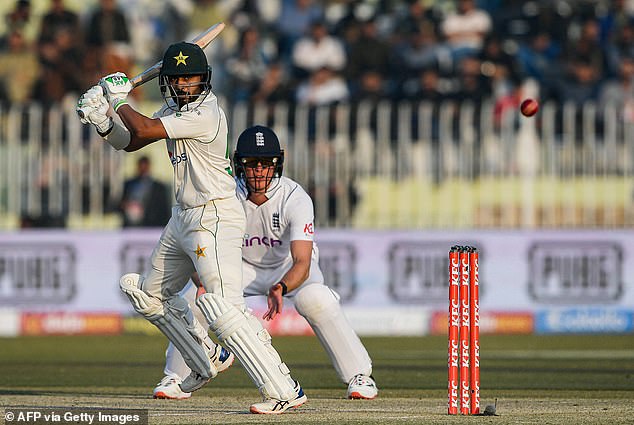 Instead, they were waiting for England’s spinners. Marooned on nought for 23 balls, Rizwan heaved Will Jacks for two leg-side fours in an over, then cut Jack Leach through point for four more. When Jacks went round the wicket, Rizwan deposited him over midwicket for six.

Emboldened, Shakeel lofted Leach down the ground to bring up a 104-ball half-century (Bazball this was not), and the momentum changed again.

Possibly in search of reverse swing, possibly to stem the runs, Stokes returned to Anderson with 15 minutes to go before lunch; he immediately sent down a maiden, and went into the break with figures of 11-6-11-1.

England’s problem as the day progresses may be the absence of a frontline second spinner to support Leach – despite Jacks’s first-innings six-for. 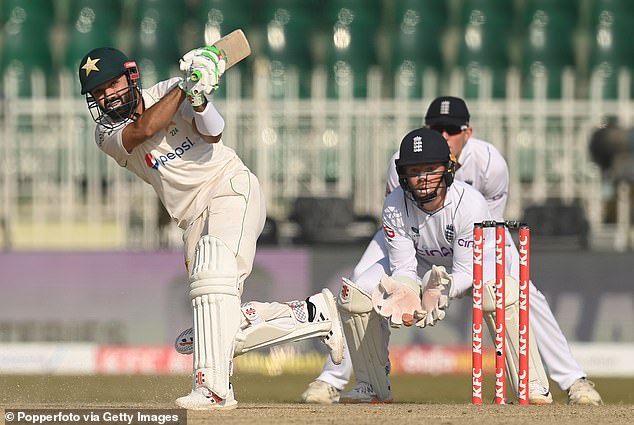 But Pakistan may face a dilemma too, with Azhar already demoted because of his finger, and Naseem Shah the start of a long tail at No 8.

Rizwan, though, looked in the mood, lofting Leach for a straight six, then cutting him for four, in the penultimate over of the session as the stadium began to fill. The home fans may yet have plenty to cheer about.

Earlier, England confirmed that Liam Livingstone would fly home tomorrow after suffering cartilage damage to his right knee when he jarred it in the field on the second day.

His place in Friday’s second Test is set to be taken by Ben Foakes, who has recovered from the virus that ruled him out of this game. Livingstone could be out for up to two months.