England Women’s dramatic extra-time victory over Spain watched by over NINE MILLION as Lionesses capture the nation’s imagination at Euro 2022… and now there’s a semi-final ticket scramble and a fan zone is heading for Trafalgar Square!

By Charlie Walker For Mail Online

England’s spectacular come-back victory over Spain in the quarter-finals of Euro 2022 was watched by more than nine million fans on the BBC.

The broadcaster recorded a peak television audience of 7.6 million, during coverage on BBC One last night and there were also 1.5 million streams across BBC iPlayer and the BBC Sport website and app for the game.

In all 9.1 million people suffered a tense encounter, with England falling behind to Esther Gonzalez’s opener, before levelling in the 84th minute through Ella Toone and then Georgia Stanway scoring the winner in extra time with a stunning strike.

The high viewing figures highlight how Sarina Wiegman’s side have captured the interest of the nation as they aim to win a first major tournament on home soil, in a tournament that is breaking every attendance record.

Wiegman captured the significance of England’s win as the final whistle blew, along with the England bench the coach ran onto the pitch  and turned to a TV camera with fists clenched and shouted: ‘Come on!’

The 2022 finals already boast the highest attendance figures for a Women’s EURO, after the 240,055 mark set at the 2017 finals in the Netherlands was passed in the group stages.

Following the France-Belgium match, played at the New York Stadium in Rotherham last Thursday, the total attendance for the tournament reached 248,075

By the end of the group stage, the number was 357,993, meaning that even if no one attended the seven knockout games, the previous record average of 9,000 would be comfortably beaten.

A record-breaking attendance of 68,871 turned out to the watch hosts opening match in the tournament, a 1-0 win over Austria at Old Trafford. Prior to that the biggest crowd for a Euro finals game was 41,301, set when Germany beat Norway in the 2013 final in Sweden.

The record is likely to be broken again for the Wembley final on July 31.

It was a scene replicated in living rooms up and down the country.

England were roared to victory in their quarter final by a crowd of 28,994 at the Brighton and Hove Community Stadium.

The attendance was 147 more than the crowd that turned up to the same venue to watch the Lionesses’ 8-0 victory over Norway in the group stage.

A record-breaking attendance of 68,871 turned out to the watch hosts opening match in the tournament, a 1-0 win over Austria at Old Trafford, and 30,785 came to watch England’s final group game, a 5-0 win over Northern Ireland.

The team’s semi-final against Sweden or Belgium takes place next Tuesday at Bramall Lane, again shown live on BBC One.

Following England’s stunning victory against high-calibre opposition, an extra 2,000 tickets put on sale for the Lionesses semi final sold out within 10 minutes.

City Hall in London also announced the match would be screened live in Trafalgar Square in front of 5,000 supporters.

The match, which kicks off at 8pm on Tuesday, July 26, will give England’s women a chance to reach their first Euros final since 2009.

Senior Host City Manager for UEFA Women’s Euro 2022, Bev Ward, said: ‘All nine of our host cities have played a pivotal role in putting on a range of events which have helped make this year’s tournament such a record-breaking spectacle.

‘We have seen fans and families from all nations come together to enjoy food, music and entertainment at our fan parties and now it is Londoners turn to show their support.

‘Whether you are a diehard football fan or just looking to enjoy your first tournament, we want everyone to share in the momentum of this event.’ 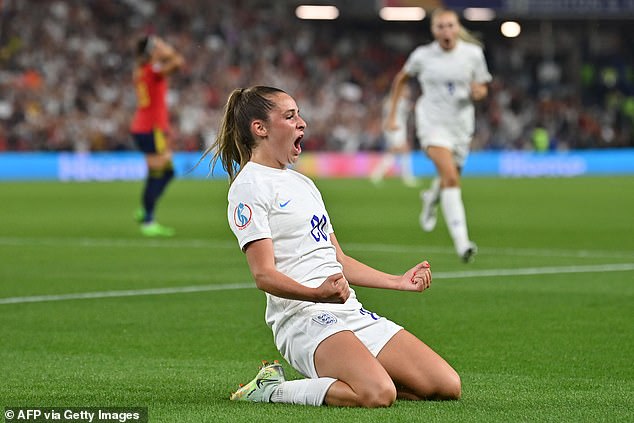