With just over 24 hours to go until the Champions League final gets underway, 100,000 football fans have descended onto Madrid as they get ready to soak up the sun and drink the Spanish capital dry ahead of the biggest game of the season.

Liverpool and Tottenham will meet in the first all-English final in the tournament for 11 years and 100,000 supporters are expected to arrive in Madrid to watch the action unfold.

The influx has already started with a carnival atmosphere building nicely as the revellers pour into the country and settle in for what promises to be a memorable weekend.

Around 100,000 Liverpool and Tottenham fans are arriving in Madrid for Saturday night’s huge Champions League final 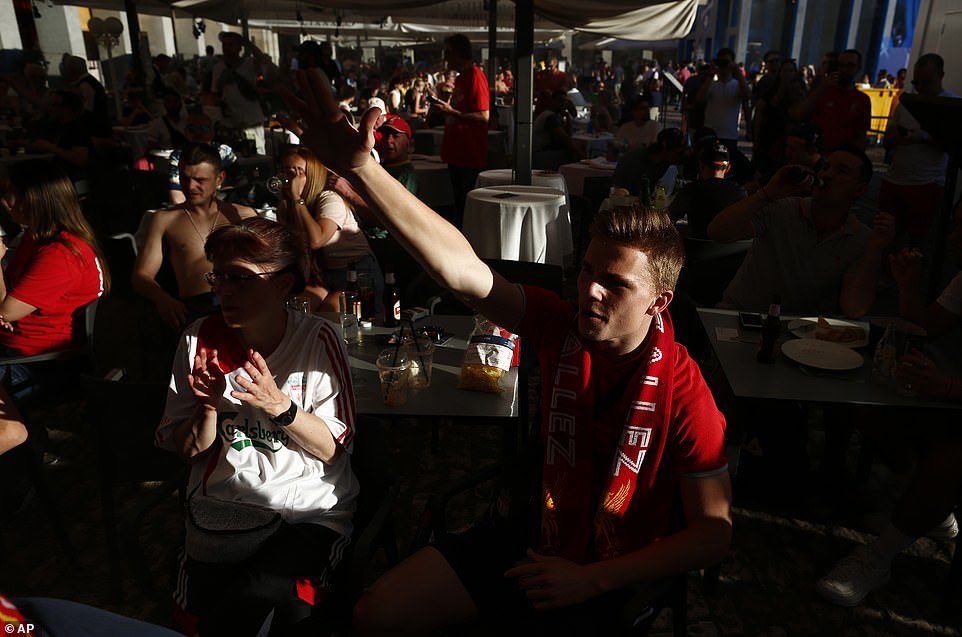 With temperatures soaring to above 30 degrees, fans were seen lapping up the sunshine in the city’s restaurants and bars 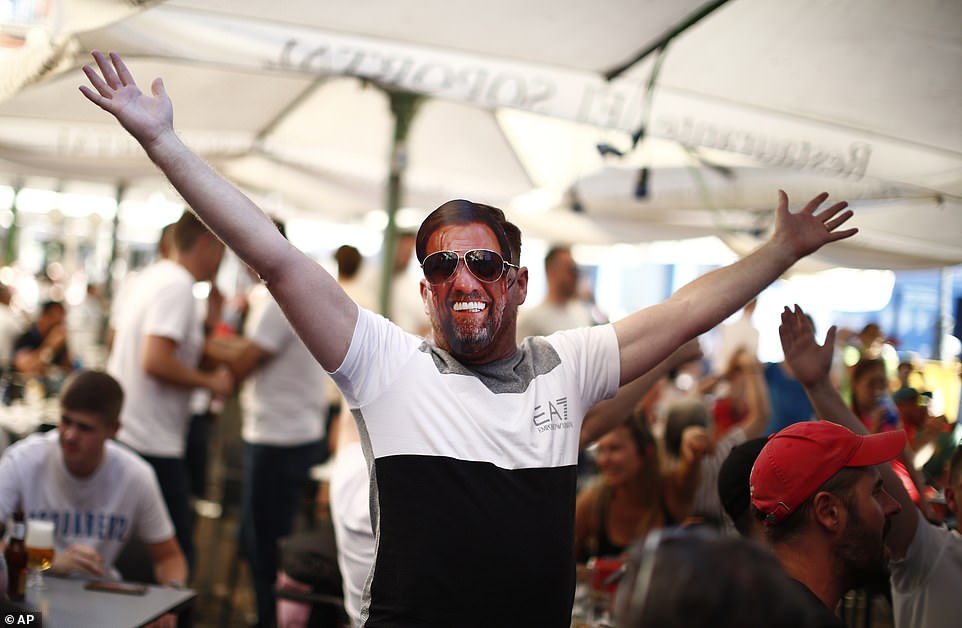 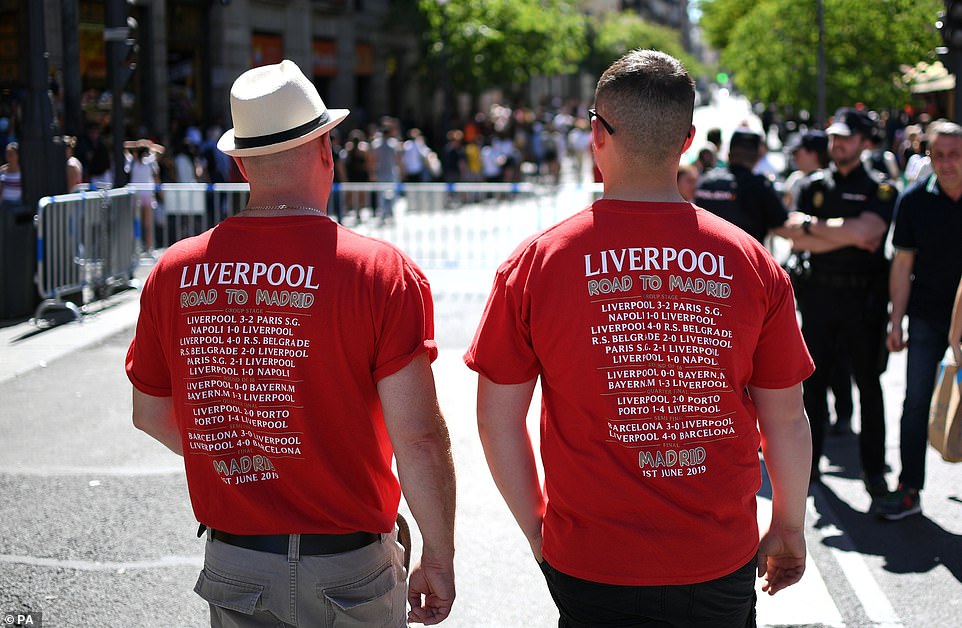 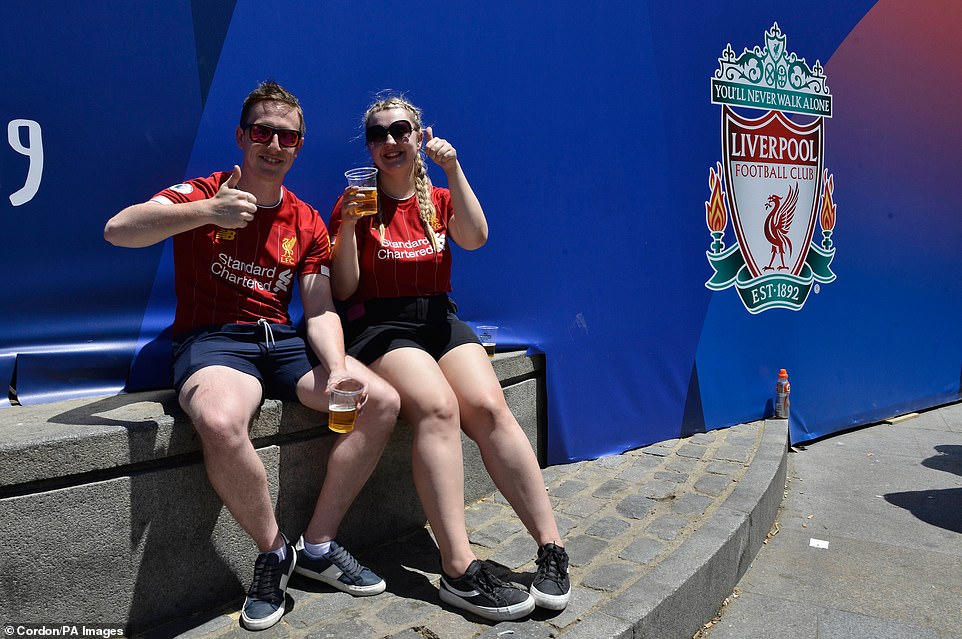 Temperatures are hovering just over the 31 degree mark this weekend and those who have arrived are embracing the holiday feel in the hundreds of bars and restaurants across the city.

Masks of Liverpool manager Jurgen Klopp, half-and-half scarfs and specially made banners could all be seen among the Spurs and Liverpool supporters setting up camp in Plaza Mayor, one of the city’s main tourist attractions.

Footage circulating on social media shows both sets of fans reeling off chants and songs on the terraces of bars as they make the most of the sun and sangria on offer.

A series of concerts featuring some of Spain’s leading DJs and singers have helped to keep fans occupied but the majority decided to make the most of the city’s atmospheric bars which were doing a roaring trade, helped partly by Spain’s reasonably priced alcohol.

Most fans there don’t even have tickets for the game. Entry is proving to be so elusive that one Tottenham fan admitted he is willing to part with £10,000 to watch the action unfold.

The teams have only been given a combined allocation of 32,000, despite the stadium’s 68,000 capacity, so it is no wonder Spanish authorities say the majority of fans are arriving ticketless.

Desperate fans are strolling around the city centre, sipping beer and asking passers-by for that golden ticket while others wore t-shirts or held placards declaring: ‘I need a ticket.’ 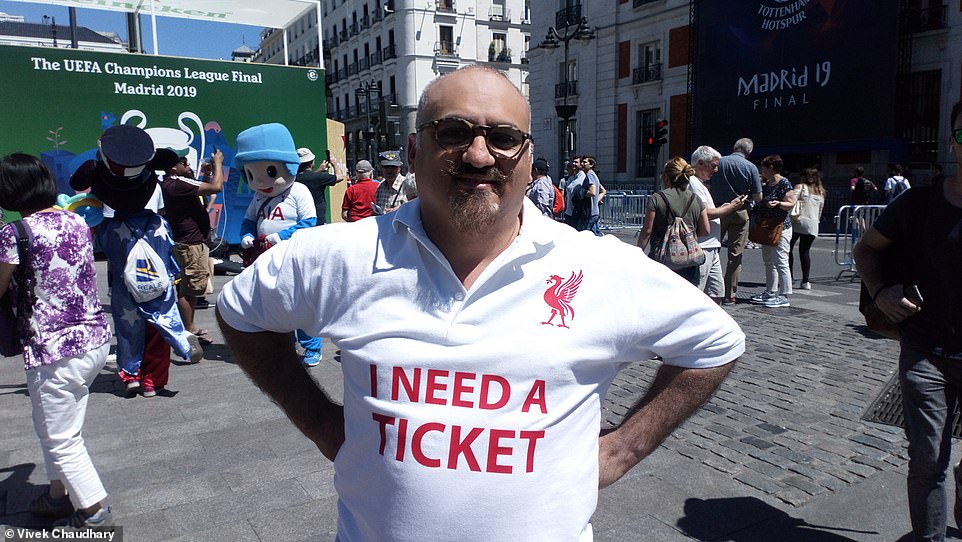 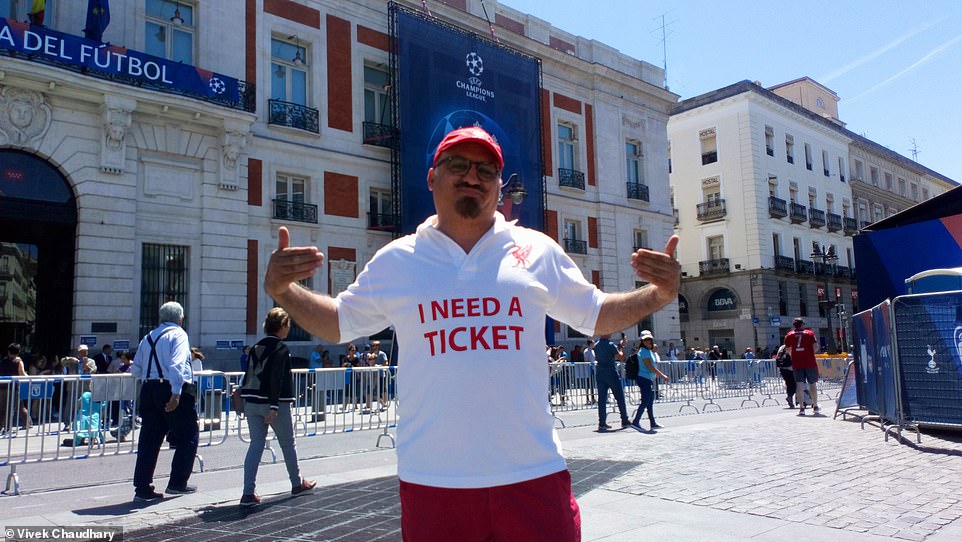 Mr Darwish, a dentist, flies from Dubai to Liverpool for every match at Anfield but still missed out on a ticket for the game 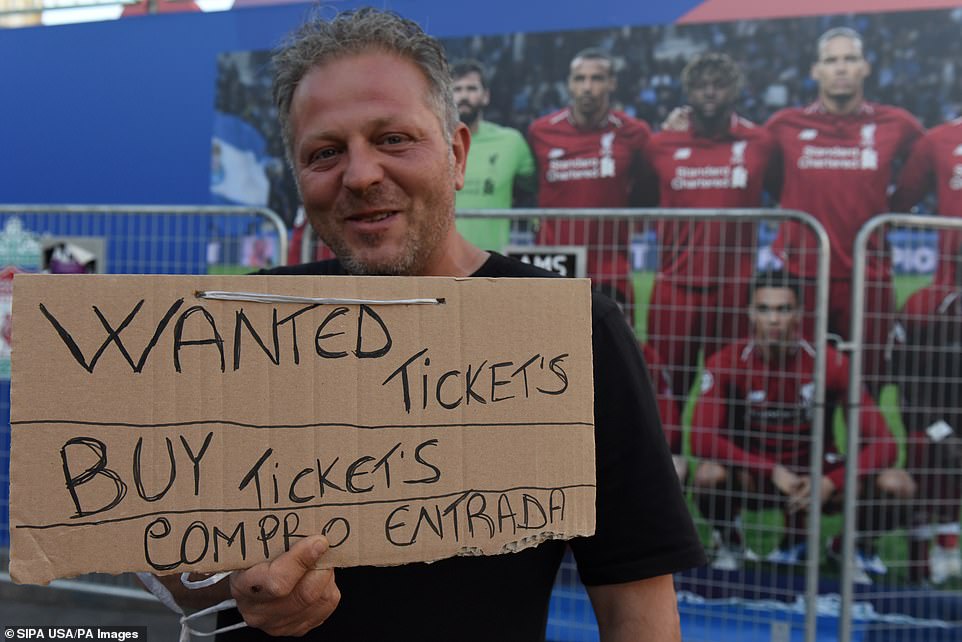 Both teams have an allocation of just 16,000 tickets at the Wanda Metropolitano but demand is definitely tenfold that figure 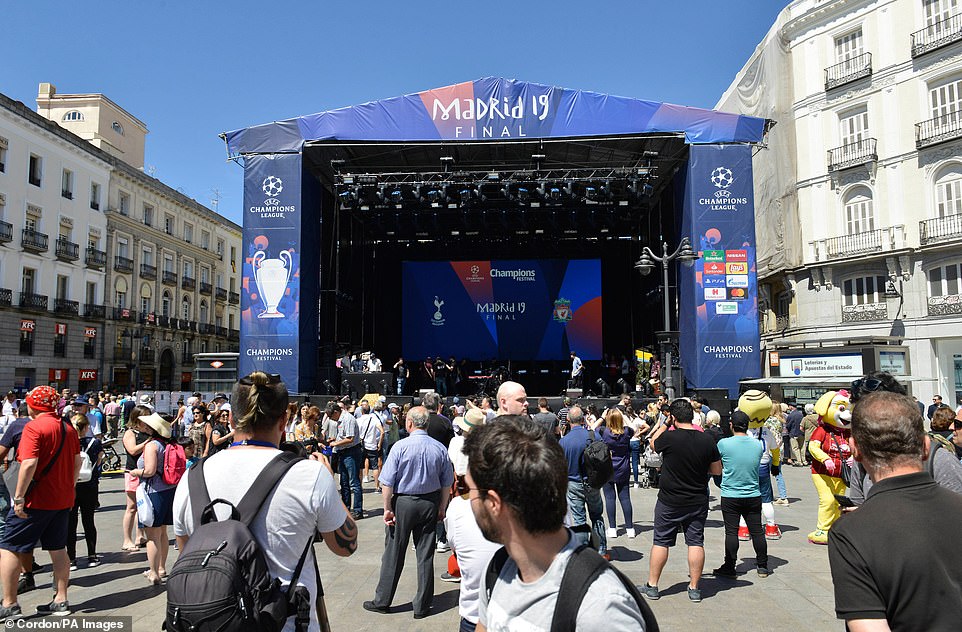 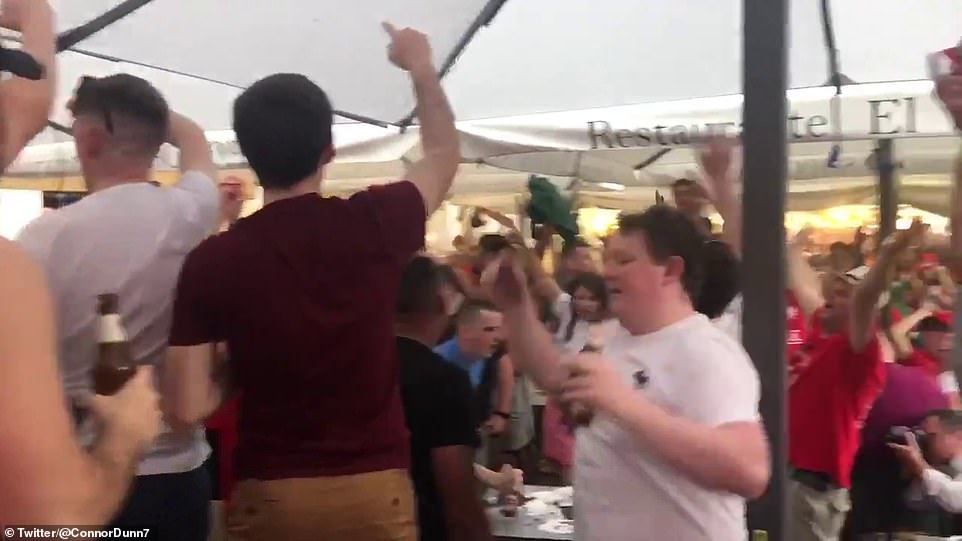 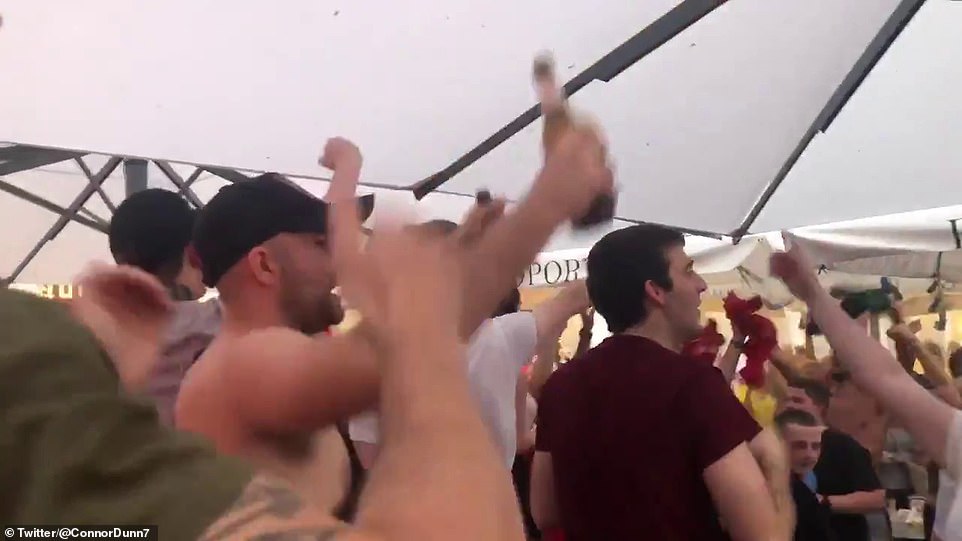 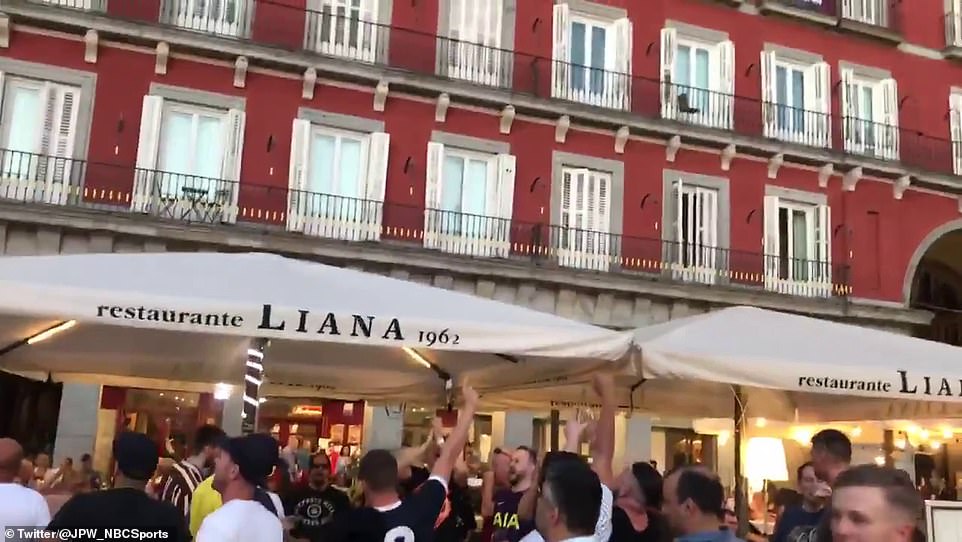 Spurs and Liverpool supporters have set up camp in the picturesque Plaza Mayor, one of the city’s main tourist attractions

Touts huddled on street corners are offering tickets for eye-watering amounts, with some asking for up to £10,000.

Tottenham fan John Burt from Bagshot, Surrey revealed that he had set himself a budget of £7,000 to buy a blackmarket ticket but would be willing to go higher if the opportunity to purchase one arose.

He admitted: ‘If somebody offers me a genuine ticket, I might even pay £10,000. I’ve been watching Spurs for 40 years and I never dreamed that we would be in a Champions League final. This is a once in a life time opportunity.’

With direct flights to Madrid costing in excess of £1,000 and virtually every hotel room in the city sold out, fans have had to be creative with their travel and accommodation.

Many drove from England or flew in to other Spanish cities and even neighbouring countries, making their way to Madrid by bus, car or train. Some fans had also erected tents in one of the city’s major parks while others were willing to bed down for the night on the pavement.

While most are relaxing in the Madrid sun, hundreds of Spurs fans still face a battle to make kick-off after Thomas Cook revealed one of their chartered flights will not land in Madrid until 4:30pm on Saturday – less than five hours before kick-off.

The travel company has already had to apologise over a lack of communication surrounding flight times but they faced more criticism on Thursday night after it emerged over 400 fans, who have paid £559 each for what was advertised as a ‘morning flight’, would not be leaving Stansted Airport until 1:30pm and could then face a rush to get to the Wanda Metropolitano in time for kick-off at 9pm local time.

The frustrating delays have been attributed to the huge surge in flights this weekend to cope with the numbers of fans travelling out to the all-English final. 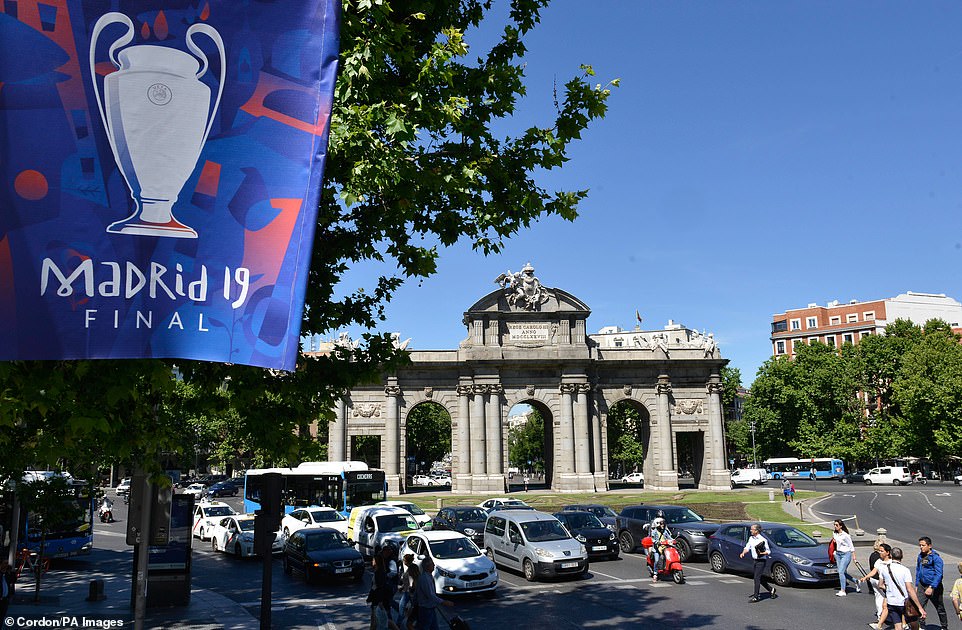 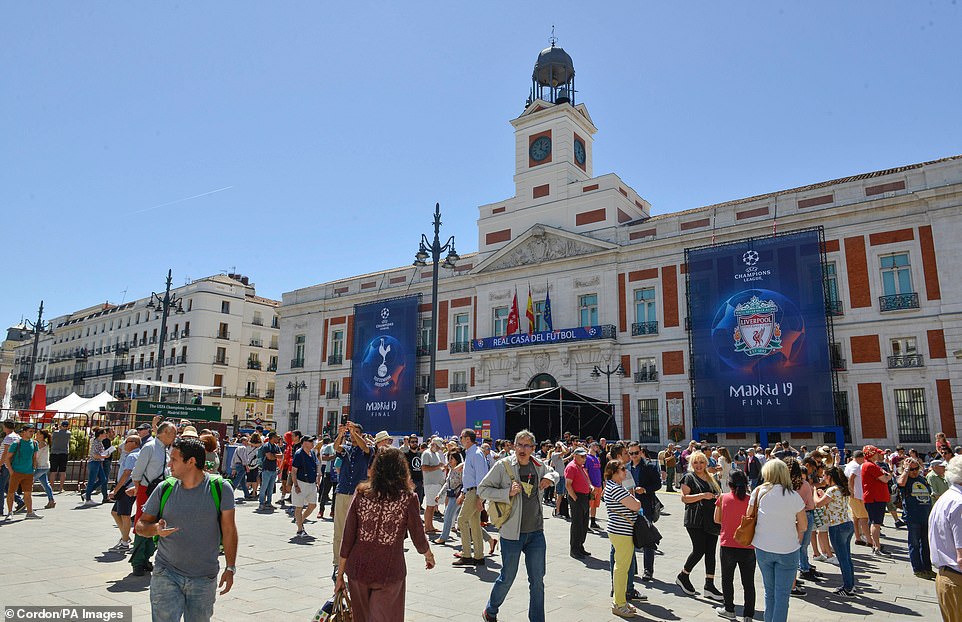 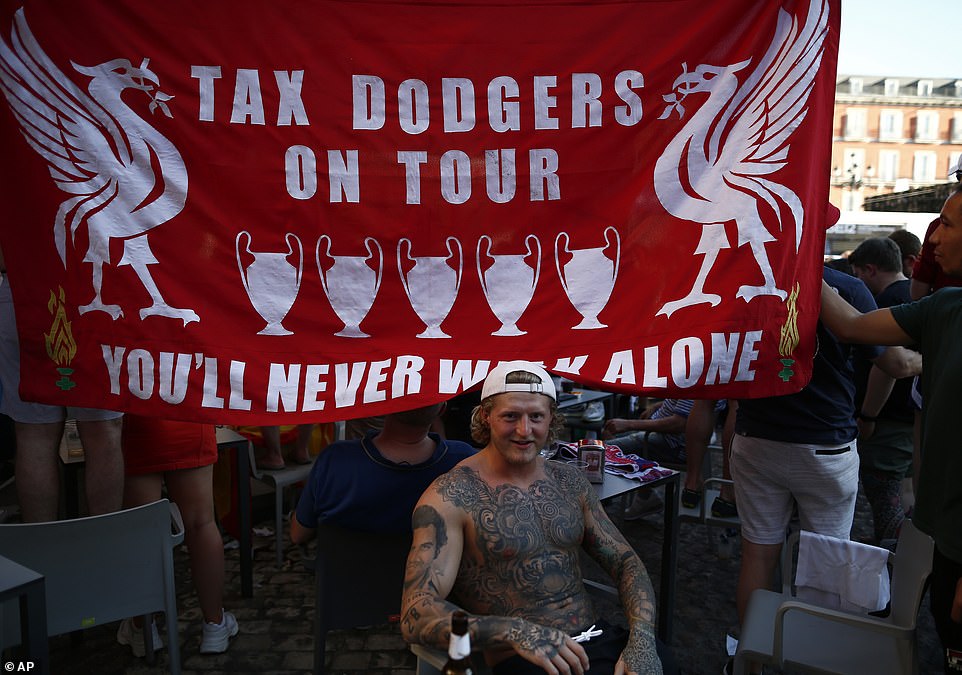 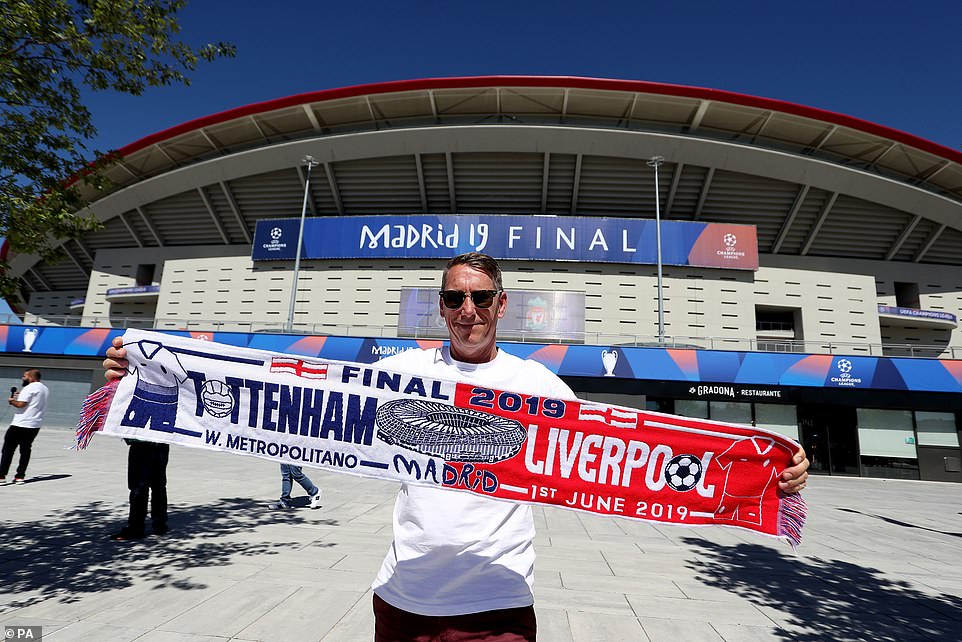 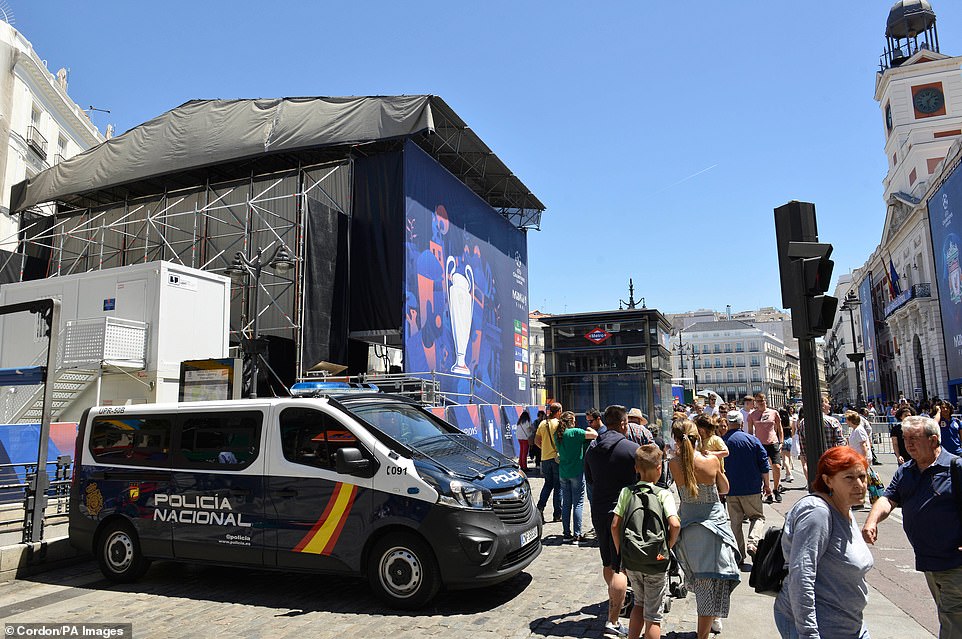 Around 5,000 police officers, some of them armed, are on duty while drones are being employed to keep an eye on trouble

The Department for Transport said that Friday could see the ‘busiest-ever day for the UK’s airspace with more than 9,000 flights’.

There are expected to be around 800 extra flights in UK airspace between Friday and Sunday because of the final.

Despite the carnival atmosphere in Madrid, Spanish police have initiated the largest ever security operation for a sporting event in the city’s history. The level of anti-terrorism alert currently in the country is four on a scale of five, which implies a high risk of an attack.

An estimated 4,700 police officers, some of them armed, are on duty while drones are being employed to keep an eye on potential trouble makers drinking in Madrid’s narrow side streets.

Heavy vehicles will be barred from driving near the stadium and designated fan zones for 24 hours starting at 8am on Saturday to prevent a ‘Nice-style’ attack and all police leave in the Spanish capital has been cancelled.

While there has been no history of major trouble by Tottenham or Liverpool fans during this season’s Champions League run or in recent seasons, authorities are leaving nothing to chance.